There’s nothing new about a console property moving to tablet, but with Skylanders: Trap Team Activision has pulled off something quite unique. This isn’t a stripped-back shadow of a console game, or a game that shares a name with the other versions, but sadly not a genre, gameplay, graphics or anything else. It’s also not a shoddy port or some dumbed-down disaster bastardised for touch controls. This is Skylanders: Trap Team, the full game, and it looks and plays much the same as the standard console versions. It’s even being released at the same time.

Whether this is a good thing or a bad thing you can find out in the main Skylanders: Trap Team review (spoiler: it’s a good Skylanders, but not the best) but it’s impressive how little compromise is involved. Trap Team for Tablets comes with its own version of the new Traptanium Portal, the same two figures as the main console starter pack, and the same two trapping crystals. Hidden away within the portal is a dedicated twin analogue-stick controller, complete with four face buttons in an Xbox layout and a full set of four shoulder buttons. It mirrors the Xbox 360 and PS3 set-ups perfectly. 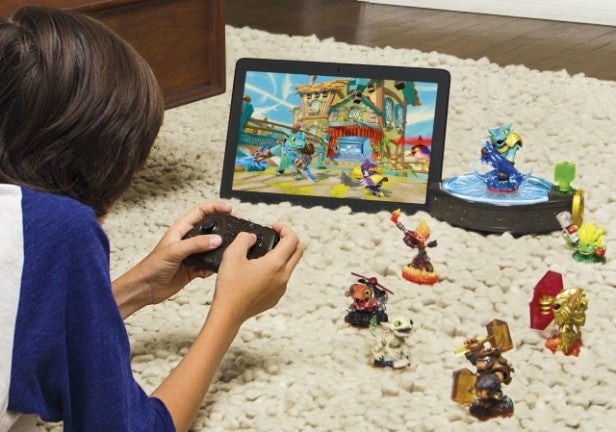 The portal communicates via a Bluetooth connection to the Trap Team app, which you install for free from the relevant app store. The same goes for the controller, and the whole process is remarkably seamless, requiring no configuration whatsoever. The hardest thing about the whole setup is inserting the AA batteries in both peripherals – and even there the screws locking-in the two compartments can be undone with either a coin or a screwdriver.

The controller itself works better than it initially looks and feels. It’s a cheap, lightweight effort, but the twin sticks are surprisingly robust and responsive, and the face buttons don’t feel bad at all. The shoulder buttons are a bit too cramped for comfort – you wouldn’t want to play Call of Duty, even if you could – but they work well enough. The greatest compliment we can pay it is that after an hour so of play we forgot we were using it. It doesn’t significantly hold the gameplay back.

Just be aware that the controller won’t be compatible with other games, so it’s not a cheap way to get an iPad games controller. What’s more, you’ll need an extra controller for co-op play. There doesn’t seem to be any way for one player to play on the pad, with another on touchscreen controls. 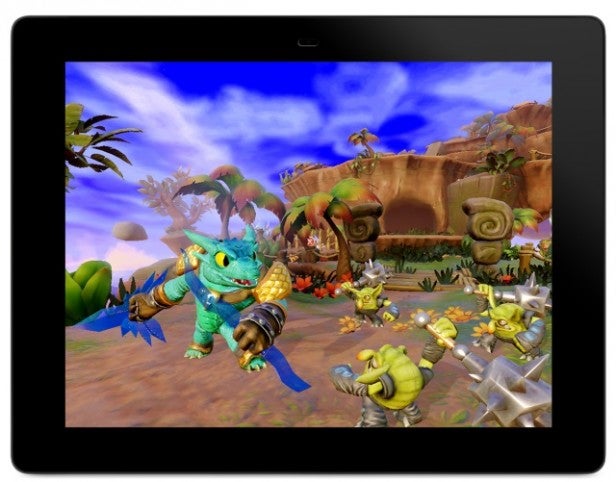 As far as graphics go, your mileage will vary depending on your choice of tablet. In fact, part of the reason the app will only run on specific models is that it’s optimised for each, with a pre-set configuration. We played Trap Team on an iPad Mini with Retina Display, and while the A7 processor can’t keep pace with the hardware in the Xbox One or PS4, it managed something that looks much like a last-gen console version running at the native 2048 x 1536 resolution, albeit with the frame rate dipping well below 30fps from time to time. It’s perfectly playable, packed with crisp detail and blessed with some sweet lighting effects, but perhaps not as silky smooth as the conventional console versions.

That’s quite impressive, and the combination of the controller, the portal and the same Skylanders figures means that playing Trap Team on tablet isn’t vastly different from playing it on console. The screen might be smaller, but it still sucks you in. The whole toys-to-life experience has been bought over to a mobile platform, almost entirely unimpaired. And when we say ‘almost’ we really mean it. The biggest differences are that the Traptanium portal looks a little different and has a glowing tubular ring rather than the more subtle glowing surround, and that the portal itself stays silent when a villain is trapped, with all noise dished out by your tablet’s speakers or headphones.

In theory, it’s also a more flexible way to play. You can pick up your tablet at any time and take the action with you. If it’s mid-game you’ll be warned that your Skylanders won’t be updated, but you can carry on using them and just accept it, or use the two built-in ‘instant’ Skylanders instead. These have their own levels, upgrade paths, hats and trinkets, independent of their physical figure versions, and in theory you could complete the game’s levels using only them. 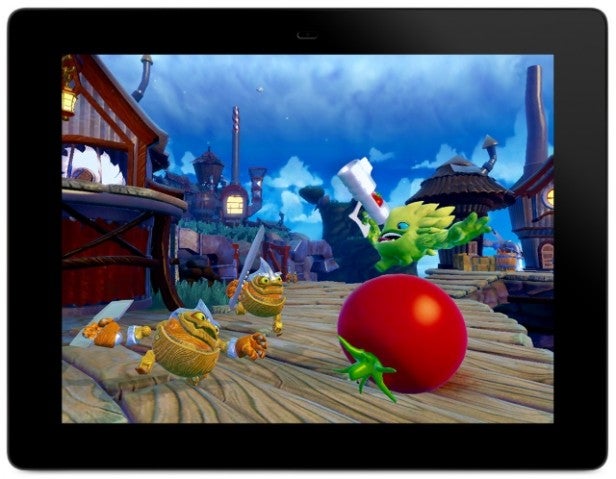 In practice, things are aren’t quite so wonderful. For one thing, unless you play regularly with your instant Skylanders you’ll find them underpowered for many situations, and they simply won’t last long enough. For another, you won’t have access to additional Skylanders and villlains, which can make things difficult when younger players take on more challenging battles or a boss. Most seriously, however, the touch controls which replace the controller aren’t up to the job. It’s not that the team hasn’t done the best job they could, but they’re not fast or dependable enough to handle the trickier sections of the game.

What’s more, you might find that you don’t have the data to play more than a few levels. Trap Team for Tablets can work in two ways, either by downloading all the game’s data to your tablet – consuming 6.1GB in the process – or downloading the core game and a handful of levels, then downloading others on demand. The former involves a big wait upfront and the latter more but smaller waits while you play, but if you want to play Skylanders away from home, then the big install is the only realistic way to go. Go on kids, ditch your Mum and Dad’s music library and videos; we’re sure they’ll understand how important Skylanders can be!

Overall, the impressive thing about Trap Team for Tablet is that it’s a perfectly viable way to enjoy the game. Despite the bundled controller it’s widely available at the same price as the conventional console versions, and the single-player experience isn’t radically different for better or worse. Could this be the start of something? Could we one day see a Call of Duty for iPad, or even a Guitar Hero for tablets with a bundled guitar controller? Who knows, but if you’ve splashed your cash on a tablet, not a console, and want something meaty to keep the kids busy, then you’ll find Skylanders an expensive habit (see the main review) but weirdly satisfying all the same.

Verdict
Bar a few minor issues and the slightly cheap-feeling controller, there’s precious little difference between the tablet experience and the main console versions. The game itself has its flaws, and the ‘on the go’ idea doesn’t work quite as well as hoped, but Activision has done a fine job of bringing a major game to tablet, and we’ll be interested to see if this is the start of a brand new trend.