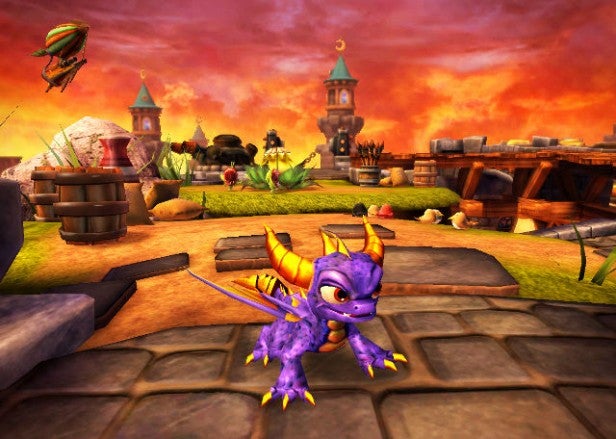 Here’s the genius idea in full. In Skylanders: Spyro’s Adventure you are a portal master, charged with bringing heroes into the game world so that they can reunite the pieces of the broken Core of Light and defeat the wicked Kaos and the mysterious forces of The Darkness. The heroes take the form of little plastic figures, which you place on a rather cool glowing portal that plugs into your console via a USB socket. Doing so sucks them out of the physical world (though not literally) and into the game. 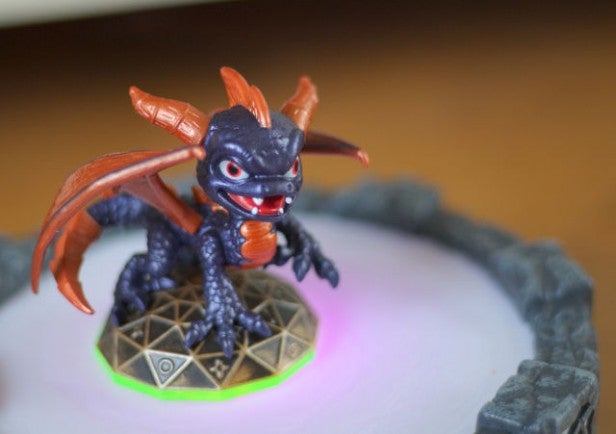 Each hero differs in movement speed, resistance to damage and primary/secondary attacks. Also, each is affiliated with a different element, which controls how powerful they are in specific areas of the game world, and whether they can use certain gateways to access new areas in the current level. This last bit is particularly clever, as while the characters themselves will be hideously appealing to the 6 to 12 year-old crowd that loves Transformers and Ben 10, there’s simply no way to see every area in a level or complete all the special challenge missions wihout ponying up for extra figures. 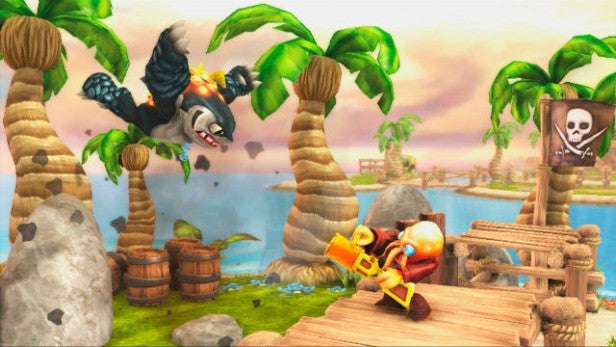 Three are provided in the box, including the game’s (only nominal) star, Spyro the Dragon. However, there’s already a healthy range of additional heroes, available separately or in themed packs for between £4.50 and £20. You might start with just the starter pack, but before you know it you’ll be shelling out for Stump Smash, Prism Break and Wrecking Ball, or hitting the credit card to grab the Pirate Adventure Pack and all its goodies. The game even has its own form of in-game advertising, through collectible power-ups that come with a video preview of the character they’d normally attach to. Can you live without Zap having seen his electrical dragon-breath in action? No? We can’t either. 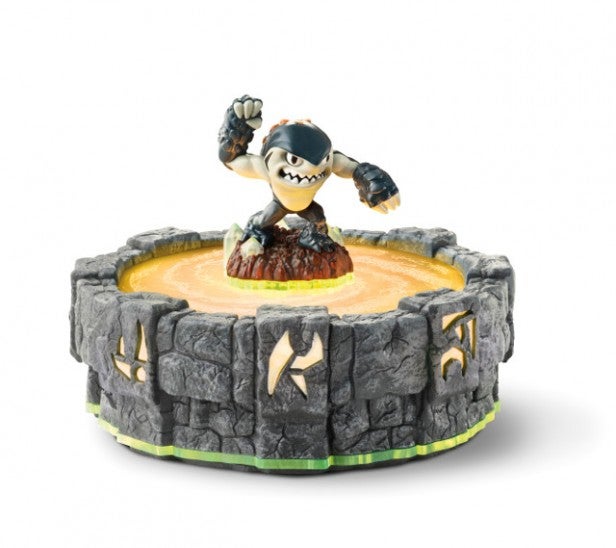 It’s a brilliant concept, and we can’t deny that there’s a thrill in grabbing a new hero from the package and sticking them on the portal, then seeing them for the first time in-game. The different gates and areas even encourage you to swap heroes as each level plays out, pulling one off the portal and rapidly switching in another. With two controllers connected you can even place two heroes on the portal and play the game in a co-op style, with a kind of force-band that ties the two players together to avoid any split-screen issues. From our own experiences, kids love it.

But what about the game? Well, here’s the surprise. From the screenshots you might be expecting a simple platform adventure, but in fact it’s a weird hybrid of shoot-em-up and action RPG. Each level is broken down into a number of areas and objectives, and these mostly involve blasting the local baddies, collecting dropped loot, solving simple sliding block puzzles – though Skylanders prefers sleepy giant turtles to boring crates – and occasionally using jump pads to hop around.

Blasting baddies nets you experience, and experience means you level up, increasing the damage of your attacks and letting you take a bit more of a beating on top. What’s more, there are collectible hats that give your heroes bonus attributes. The clever thing is that levels, hats and even a nickname are saved to a chip in your plastic figure as you play, meaning you can charge up your Eruptor or Trigger Happy and taken them around to a friend’s house for some co-op action. 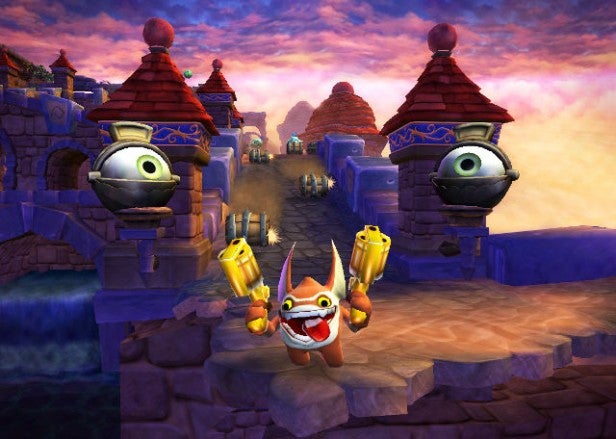 If Skylanders disappoints, it’s in the rather limited range of gameplay experiences and the repetitive nature of the levels. While a pirate cove looks different to a giant floating castle, and comes occupied by squid-headed cutthroats instead of weird Cyclops varmints, the actual process of wandering through each level battering the baddies never really changes all that much.

Weapon upgrades can be purchased and used, but only a few of the attacks are really that useful or spectacular. Even the element-specific areas and special challenge missions turn out to be variations on the same few basic themes. Skylanders works as a kind of pre-teen Diablo, and is a lot of fun in co-op mode, but you keep wishing for a little more imagination and exploration – maybe a little more depth. 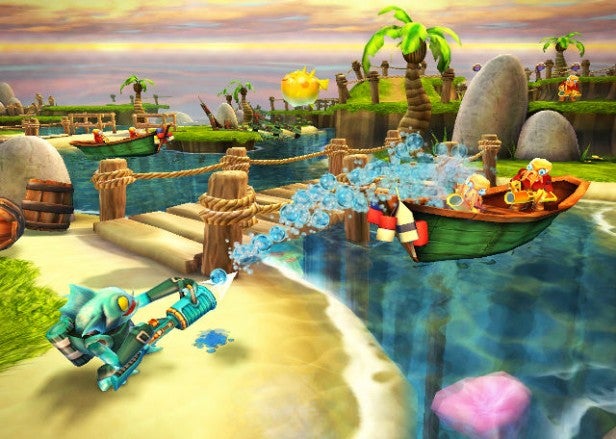 And while we’re moaning, Skylanders does have the tell-tale look of a game that’s been developed with the Wii as a target then upscaled and polished for the Xbox 360 and PS3. It’s good-looking enough for a family action game, but the latest Lego games, not to mention Sony’s Ratchet and Clank series, have proven that its possible to make something that looks as good as any grown-up blockbuster title. Plus, it would be nice to see a family game that doesn’t get bogged down with dialogue-heavy cut-scenes, even if they’re occasionally well-written and quite funny. 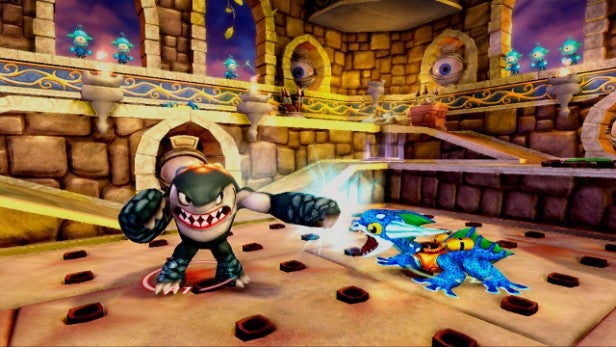 All this is true, but it doesn’t change the fact that Skylanders is slick, addictive and very enjoyable – especially when played in fairly short bursts – or that the whole thing is incredibly appealing to its intended audience.  What’s more, there are enough levels and enough replay value in each level to keep that audience busy for some time.

Skylanders also packs in a suite of fun two-player competitive modes, with a crazy top-down variation on arena deathmatch and a whacky sports game starring as the highlights. Add in the way it links in with a secure, child-friendly online world where players can build lairs for their skylanders, explore and enjoy some quirky mini-games, and it’s hard to complain about long-term value. Skylanders is fast becoming a playground phenomenon, and in many ways it deserves to.

On paper, Skylanders is an average family game tied in to a brilliant marketing concept, but that doesn’t really do justice to how much fun the whole thing is. The gameplay isn’t anywhere near as inventive or rewarding as it is in the Lego Star Wars/Harry Potter/Pirates series, but its light RPG elements make it more compulsive than it sounds and the whole interaction between toy and game is expertly done. It’s a guaranteed hit with kids, but we suspect a few parents might get sucked in as well.