Available on Xbox One (tested), PS4, Xbox 360, PS3, Wii U
At this point, six games into the Skylanders series, franchise fatigue should really be settling in. Every year we get a new Toys-to-Life game with a new gimmick and a new set of toys, and each year Activision finds some new way to part gamers (or their parents) with their hard-earned cash. Surely, you might be saying, we had enough with last year’s Superchargers, or maybe even Trap Team before that. Do we really need another Skylanders game this year?

If so, get ready for a big surprise. While it gives us some reasons not to be so cheerful, Imaginators is one of the great Skylanders, less reliant on its gimmicks than Superchargers and with a stronger campaign and better level design than Trap Team. Even without this year’s unique selling point, even without the Toys-to-Life stuff, it would be an excellent family game. Better still, its big gimmick ties in brilliantly to what’s most appealing and addictive about the franchise. It turns out that letting players create their own heroes can make for a more absorbing game. 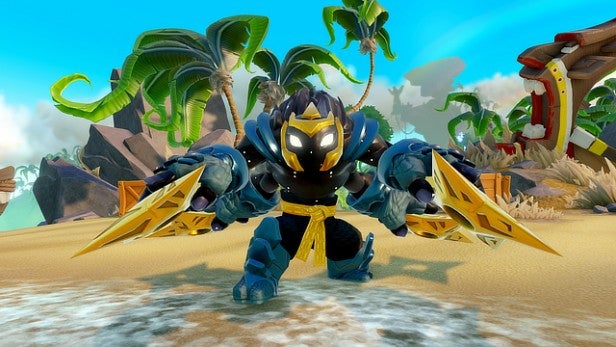 In case you’re not aware, Imaginators is the first game in the series that enables you to build your own Skylander, or Imaginator. As well as the two Sensei figures in the Starter pack (more on these later) you get something that looks a little like a fantasy egg timer: the Imaginator Crystal. Put one of these on the new Portal of Power and the game launches a new character creation interface where you can define practically every aspect of your hero. Each crystal has an Element, which, in classic Skylanders fashion, defines the basic type of the Skylander and the regions where they’ll be strongest. Then, you pick a battle class, making them a sorcerer, knight, brawler, swashbuckler or one of the other six classes available. This sets out their combat style, weapon-set and basic moves.

From there you can pick a head and body parts from the library before going deeper into colours, eye-shapes, size and body shape. After that, it’s time to select weapons, armour and other useful items before picking the additional powers they’ll go into battle with. There are hundreds of options and a lot of combinations, though most won’t be available from the off. Don’t worry; the more you go adventuring out there in the Skylands, the more options you’ll discover and unlock. 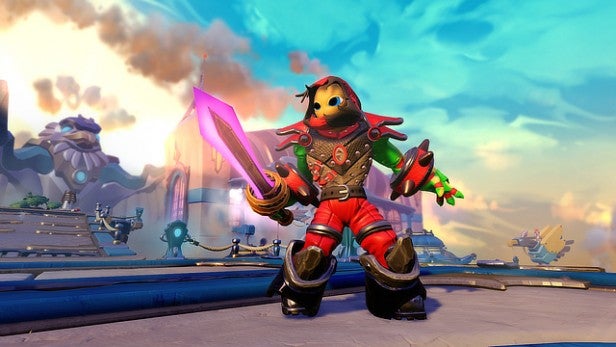 This is where Imaginators gets really good. Much of the appeal of Skylanders has always been the way in which you can level-up and empower your figures, turning them from plastic toys you bought in a shop into characters you’ve fought with and transformed. You’ve seen them go from basic models into awesome, chompy-slaying badasses, complete with a range of uber-powerful gear. And in this way, Skylanders has developed the same hooks as a World of Warcraft, Destiny or Diablo. The more you quest and battle, the more powerful you become. The more powerful you become, the more you feel the urge to throw your weight around some more, earning more stuff that makes you even more powerful.

Now Imaginators makes this cycle both more personal and more in-depth. Sure, your snake-tailed, skull-headed swashbuckler looks cool right now, but wouldn’t they look ever cooler (and kick more monster-butt) with the new scythe blade in their hands, some spikey shoulder-pieces and that new special move that turns them into a whirling dervish of destruction?

Through special Imaginite crystals and chests you’re always unlocking new stuff, and it’s really rewarding. What’s more, it keeps getting deeper. Want to put together a new two-part catchprase? No problem. How about weird sound effects or a musical theme? You can have those too. Trust me, if Activision kept on rolling out the content Skylanders: Imaginators would be like Destiny for kids. And did we mention that you can take selfies with your Imaginators at certain scenic points? It all just adds to the fun. 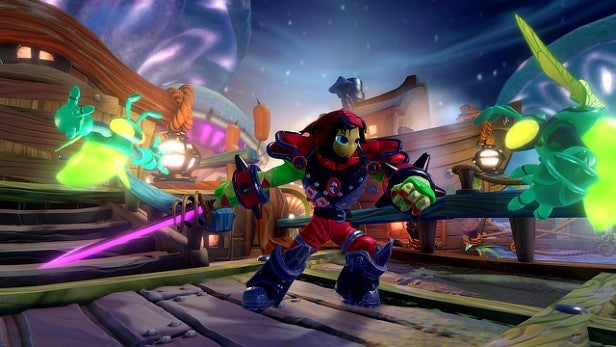 None of this would matter were the core gameplay rubbish, but it isn’t. In fact, it’s better than it’s been in years. The mixture of fast-paced combat, platforming and puzzle-solving works a charm, with the variety in character classes meaning you can get up close and brawl or work from range as you prefer. Better still, the level design is consistently brilliant.

Every level seems to add fun new enemies or interesting ideas, some going heavy on sliding block puzzles and mazes, others throwing in cannons, a wrecking ball, old-school 2D platform sequences, grind-rails or destructible scenery. Even the boss battles are entertaining. Throw in new Arena battles and Creation Clash, the successor to the Hearthstone-like Skystones, and there’s an awful lot of fun on offer. Slick, varied, well-paced and laced with a self-aware humour, Imaginators is the kind of game your kids will want to play – and the kind of game you’ll want to play with (or even without) your kids. 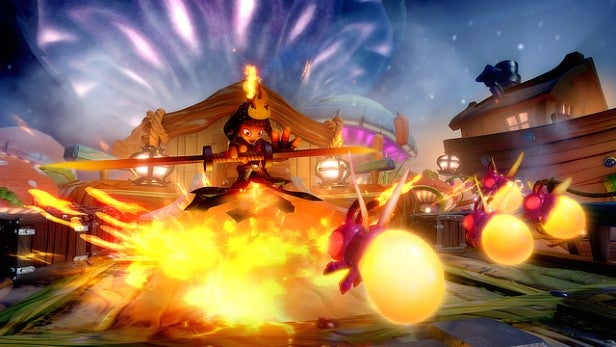 The positives don’t end there. As the first Skylanders designed for the current consoles, SuperChargers looked amazing, but Imaginators tops it with ease. It helps that the level designs lend themselves to spectacle, but the gorgeous lighting and impressive detail being the visuals pretty close to the quality of a TV CGI cartoon (and better than some). Kids don’t deserve a second-rate experience, and Imaginators never leaves you feeling that they’re getting one.

Are there weaknesses? Sure. For one thing, there’s no use in the main campaign for the Trapping Crystals used in Trap Team or the vehicles used in SuperChargers, which seems a bit of a waste if you collected either. The latest portal doesn’t even have a Trapping Crystal slot. You can use the SuperChargers vehicles in a dedicated racing mode, though, and the good news is that the racing is every bit as good as it was last year. It might not have the balance or finesse of a Mario Kart, but the land, sea and water courses are spectacular, the handling’s good and you can play solo, online or split-screen against a friend. The bad news is that it the racing is every bit as good because it’s effectively last year’s racing mode split off and served up again, with the same tracks and vehicles. You can race them with your Imaginators and with digital vehicles, if you don’t own any Superchargers vehicles, but it’s a shame that most of the content remains unchanged. 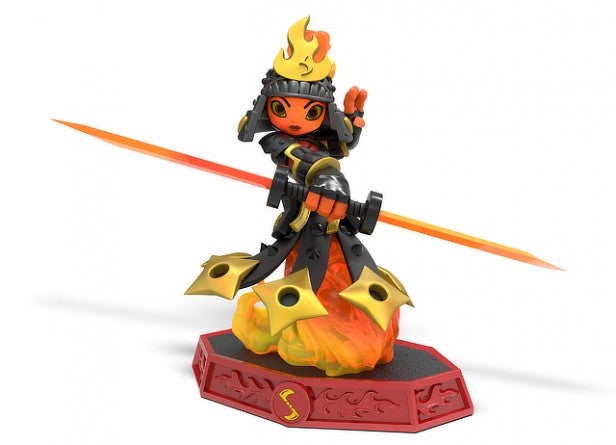 Meanwhile, it’s no surprise to find out that you’ll need more than the basic starter pack to make the most of the game. Obviously, you’ll want more than one trapping crystal if you want to create Imaginators of different elements or classes, but Imaginators also introduces a new class of Skylander: the Sensei. These mighty, mega-sized Skylanders, including some returning villains of old, combine awesome power with the ability to learn a special ‘Sky-Chi’ power at battle class-specific Sense Shrines. You can then put these to good use in each battle class’s Sensei Realm – a sort of mini-level with its own little tale to tell.

Of course, with only two Sensei figures included in each pack you’ll need to get more to use all the Sensei Shrines and visit all the Sensei Realms, though neither is vital if you just want to complete the game. What’s more, two of the most exciting Sensei figures – Crash Bandicoot and Kaos – are currently only available to those who buy special edition Starter Packs of the game, though both will come as part of separate Adventure Packs later.

Related: We played Killing Floor 2 on PS4 Pro and it looked amazing 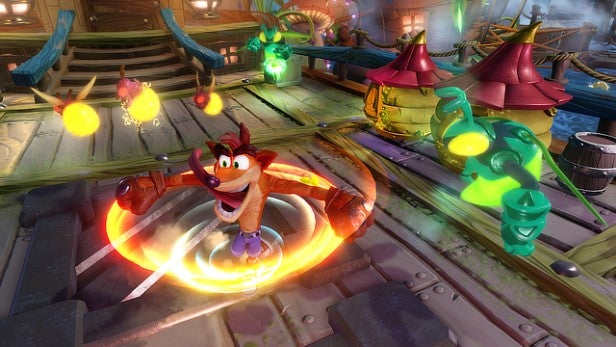 Finally – and this is really just a quibble – the storyline isn’t the strongest every found in a Skylanders game. Basically, mean little Kaos is back with his own Imaginators – the Doomlanders – and it’s your job to stop him, but it all feels rather bitty, like you’re defeating a hodge-podge series of evil schemes rather than one villainous plot. Still, it’s not as if we go into Skylanders expecting Shakespeare, and at least the cut-scenes are worth a watch and actually quite funny.

Verdict
While it doesn’t have the fun trapping gimmicks of Trap Team or the vehicles of Superchargers, Skylanders: Imaginators wins where it matters most: gameplay. The mix of combat, platforming, puzzle-solving and character progression has never been stronger than in the latest game, and the ability to create and upgrade your own Skylander actively plays into this, making it the most addictive Skylanders yet. As always you’ll inevitably end up splashing out on extra crystals and figures to make the most of the game, but this year it’s worth it. While we’d like a few more racing tracks this is arguably the best game in the series.