Skyfire is a web browser for smartphones that claims to beat other mobile browsers in terms of features, speed and support for multimedia content. In fact, Skyfire makes the bold claim that it brings the desktop browsing experience to mobile devices. The software has been in beta in the US since February, but it has only just become officially available to UK users this month (December 08). The question is does it live up to Skyfire’s lofty claims? We decided to try it out with a number of handsets to see how well it performed. 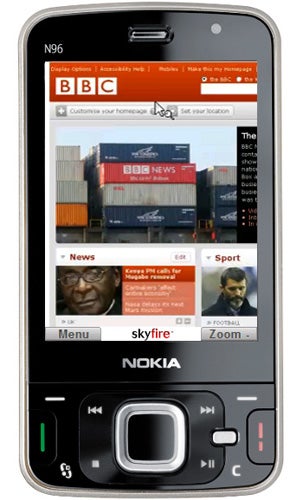 Like Opera Mini, Skyfire take a slightly different approach to rendering web pages than most ‘standard’ web browsers. Instead of building the page locally on your mobile device as the data flows in, Skyfire uses an intermediary server to render the page, compress it and then forward it to your mobile. Because of this, it could be argued that Skyfire isn’t really a browser at all, but simply a thin client for the server side browser. Nevertheless, this system has a number of advantages over traditional browsers. First of all, it drastically speeds up the amount of time taken to initially display a web page on your phone. Secondly, because the server handles all the heavy lifting it can support formats such as Flash and Silverlight that may not be natively supported on your device. 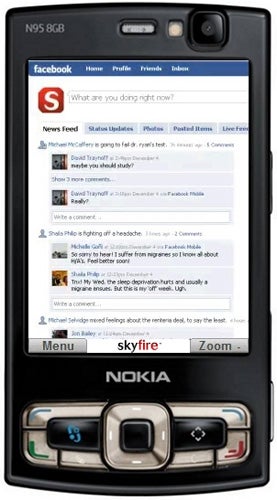 Currently Skyfire is available on both touchscreen and non-touchscreen Windows Mobile handsets as well as phones that use Symbian S60. We tried it out on the Nokia N85, O2 Zest and HTC S740. On the Nokia, the page load times were significantly faster than the phone’s own onboard browser and Opera Mobile. For example, to load the TrustedReviews homepage using the phone’s own browser took 19.6 seconds, on Opera it took 11.5 seconds, but Skyfire displayed it in just four seconds. Results for displaying the BBC’s home page were similar. It took 15 seconds on the standard Nokia browser, 10 seconds on Opera and five seconds on Skyfire. The browser was similarly rapid on both the S740 and the Zest.

Skyfire really is incredibly fast when it comes to initial page loading times, but as we’ve seen this is because it uses a server to pre-render the page before sending a compressed version to your phone. The only other browser we know that does this is Opera Mini (Opera Mobile takes a more traditional approach) and when you compare Skyfire to Mini there’s less of a speed difference. However, Skyfire is still faster. For example, using Skyfire on the O2 Zest we were able to load the Guardian website in nine seconds whereas it took 15 seconds using Opera Mini. Furthermore, Skyfire retained the original formatting of the page. 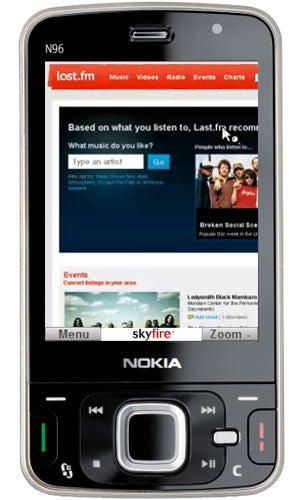 But page load speeds are only one part of the browsing experience. There are also other factors such as the speed of a browser when panning and zooming pages. In this respect, Skywire is a bit less impressive. As you pan pages around the screen, it first loads chunks of it in low-resolution before gradually covering these over with the high-resolution render. This introduces a bit of lag when you’re trying to quickly move around a page. Its zooming speed was also slower than that of Opera Mobile. 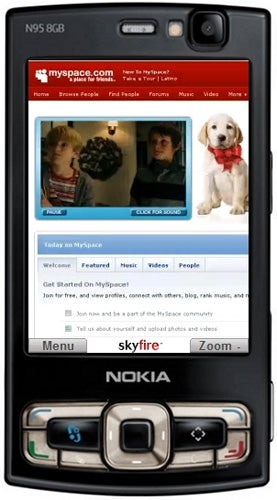 However, Skyfire does offer other advantages. It supports Flash, Silverlight, Ajax and even Quicktime because all the heavy lifting for these formats is done by the server rather than the phone. This means that you can use the browser to watch videos streamed from sites like YouTube, BBC iPlayer and NBC. However, the video quality isn’t perfect by any stretch of the imagination. Even over Wi-Fi it looks much jerkier than the original source. Also, due to lag it can be difficult to control playback and sometimes it seems to ignore attempts to fast forward through a video or to stop and restart playback. Nevertheless, despite these issues, videos are on the whole very watchable.

Naturally, as the software is still in beta there are other features that need to be tweaked. For example, the initial preview of a page when you first visit a website has obviously been optimised for smaller devices. It looked great on the N85 and S740, but on the Zest’s larger screen, it was rather blurry and lacking in clarity and as far as we could see, there was no way to make the browser generate a high-resolution render. The browser is also a touch slower to start up than its rivals. In part this is because during it’s start-up phase it needs to connect to the Skyfire servers to authenticate itself. We’ve also heard that it doesn’t respond to the accelerometer on the HTC Diamond and Touch Pro, although not having these devices to hand we couldn’t check this. 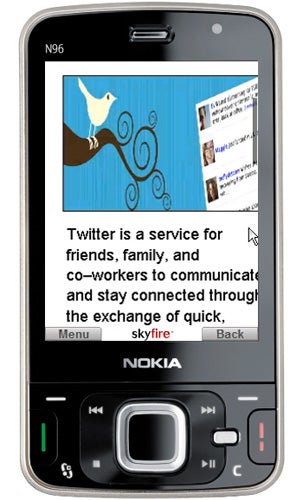 A bigger issue going forward, however, is that it currently does not work at all on devices with WVGA screens. This is a screen resolution that’s becoming increasingly common and is already found on high-end devices like the Touch HD and Samsung Omina. It’s also a shame that there’s no version yet for Palm or Blackberry handsets. On its website Skyfire seems to indicate that it is working on a Blackberry version, but things look less hopeful for Palm OS support. 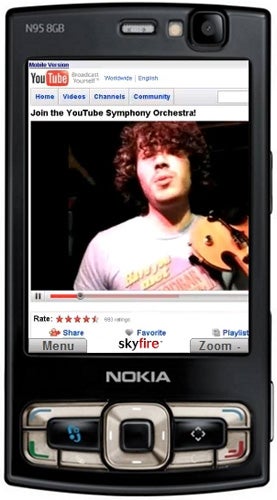 If Skyfire can iron out these issues over time, we think it’s on to a winner. Considering the fact that it’s free and will remain so at least in the near to mid term (Skyfire says it’s currently just trying to build a big enough user base before deciding on its core strategy for generating revenue), there’s really no reason not to load it up on your phone and give it a try.


It’s still early days for Skyfire, but what the company has produced so far is seriously impressive. It’s fast, easy to use and its support for streaming video formats, while far from perfect, is good enough to make it an application that’s worth having on your phone. If you haven’t tried it out yet, we suggest you do.