What are the Skullcandy Crusher Wireless?

The Skullcandy Crusher Wireless are Bluetooth headphones with a special bass resonance chamber. Skullcandy made an older version of the Crusher, reviewed by Trusted Reviews back in 2013, and this new pair adds wireless connectivity, updated sound and a reworked design.

Taken as a pair of standard wireless headphones, the Skullcandy Crusher Wireless sound fairly good. However, their unique selling point is a bust. The bass resonance feature adds the worst kind of low-end: detached, distorted and slow.

Bass-heads would be better served by the Urbanista New York, which have natural bass thrills you’ll find more satisfying. 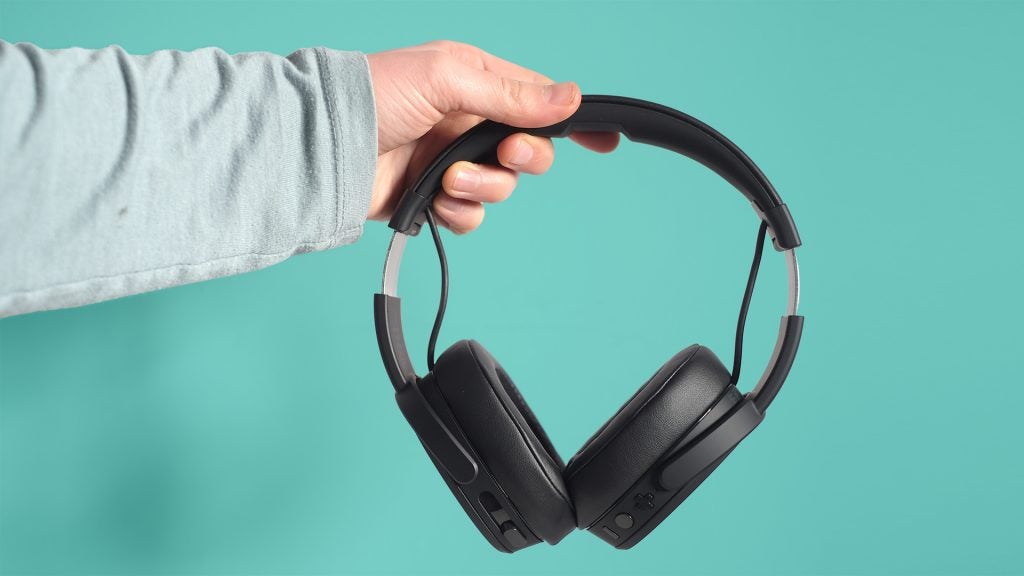 The Skullcandy Crusher Wireless look more sophisticated than their predecessors. Where the old model looked like a pair of ear defenders, these are much closer to a standard pair of stylish street headphones.

Their outer parts are mostly soft touch matt black plastic, although there’s synthetic leather on top of the headband, and part of the steel headband will likely be exposed when worn. Unless you have a tiny head.

From a glance the Skullcandy Crusher Wireless look similar to the Skull Candy Hesh 3. They are actually rather different, with a bulkier, brasher appearance that retains a little more of the classic Skullcandy design DNA. They still fold-up to take up less space, though. 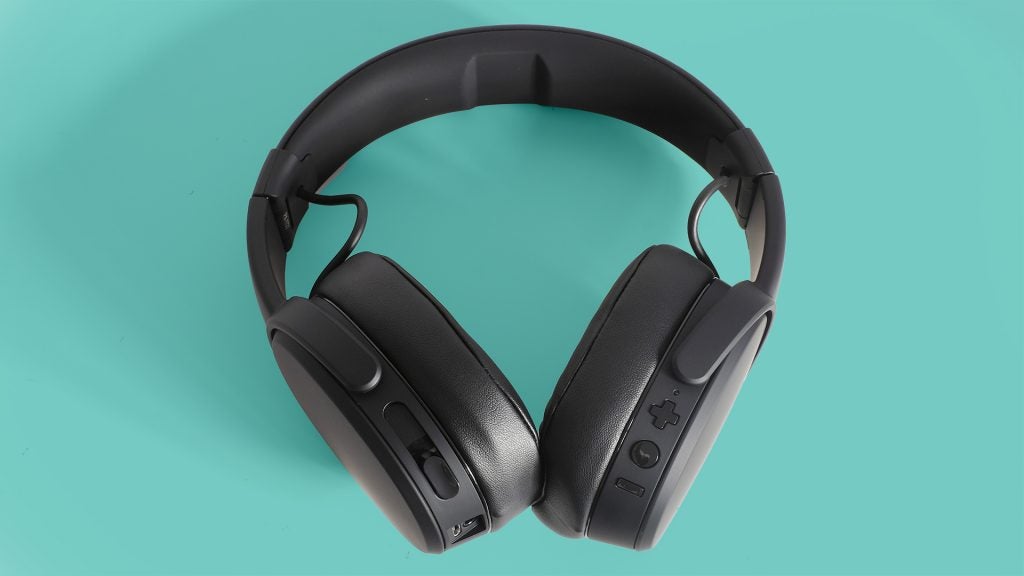 The headband is chunkier, sticks our further from your head, and the skull logos on the sides are larger. They also feel better-made than the Hesh 3, although this may be partly a side effect of the bass resonance chambers. They add weight. However, the finish is a little different too. The soft touch outer is, well, softer here.

I also find the Crusher more comfortable than the Hesh 3. Where the smaller pair has a tendency to clamp down on your earlobes, making them sore after a while, the Crusher have just slightly more room for your ears.

They do exert a decent clamping force, though, so if you have bigger ears or just don’t like firmer-feeling headphones, you may run into problems. 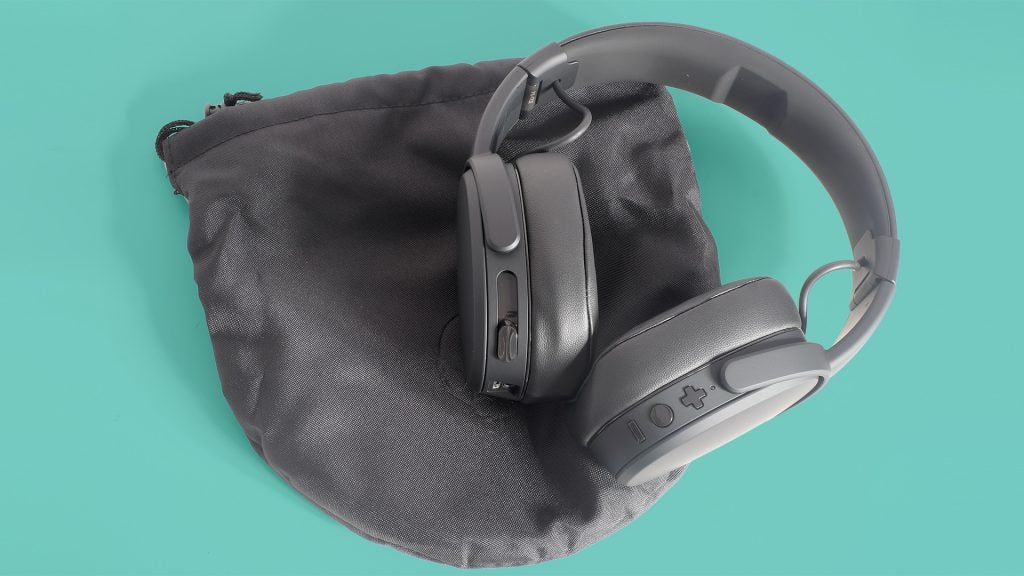 You get a bag: this bag

The Skullcandy Crusher Wireless are Bluetooth headphones, and we’ve had zero problems with their wireless reliability. Like most brand-new sets, their real-world performance is near-perfect. There are chunky playback controls on the right cup.

As Bluetooth requires a battery, this cell is also used to power the Crusher’s unusual “haptic bass” chamber. The original Crusher pair needed batteries to work. Without haptic bass engaged the Crusher last for up to 40 hours, which is fantastic.

The bass feature is likely to decrease this longevity, but it’s hard to say by how much because I couldn’t stand to have it on for long at all. 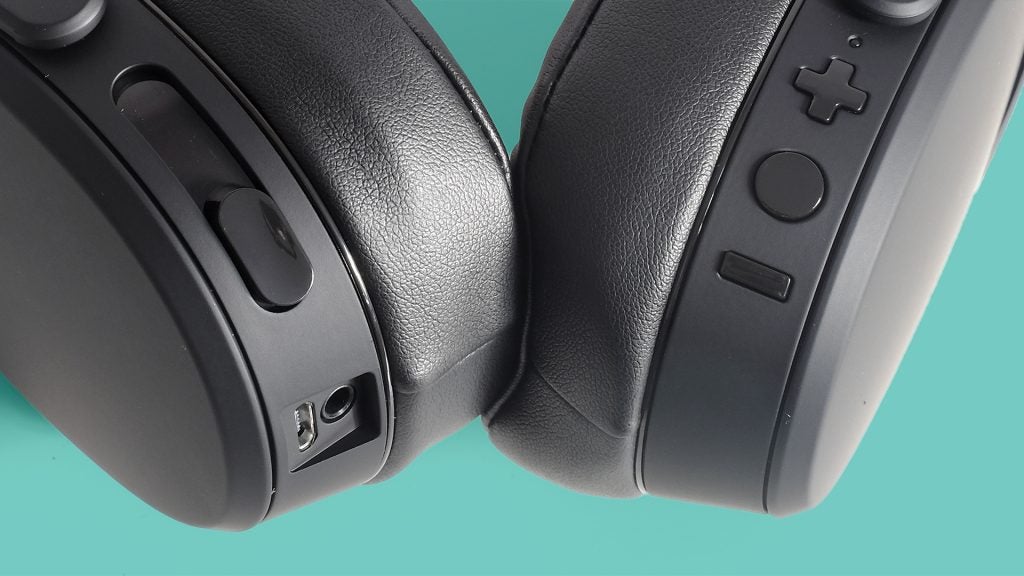 A fader on the side of the left cup lets you ramp the level of the haptic bass effect up and down. The aim is to make the Crusher the equivalent of a pair of headphones with a subwoofer attached.

The quality of the bass created, though, is very poor. It’s completely uncontrolled, the tone is terrible and it does not integrate with the sound of the actual active drivers at all. As soon as the dial is nudged up it dominates the sound. And at anywhere near the max setting it’s frankly uncomfortable to listen to.

It’s a smog cloud of bass, not the really low frequency stuff that could actually provide some club-style thrills. The effect here is more like listening to a club sound system from outside, with a brick wall in-between. 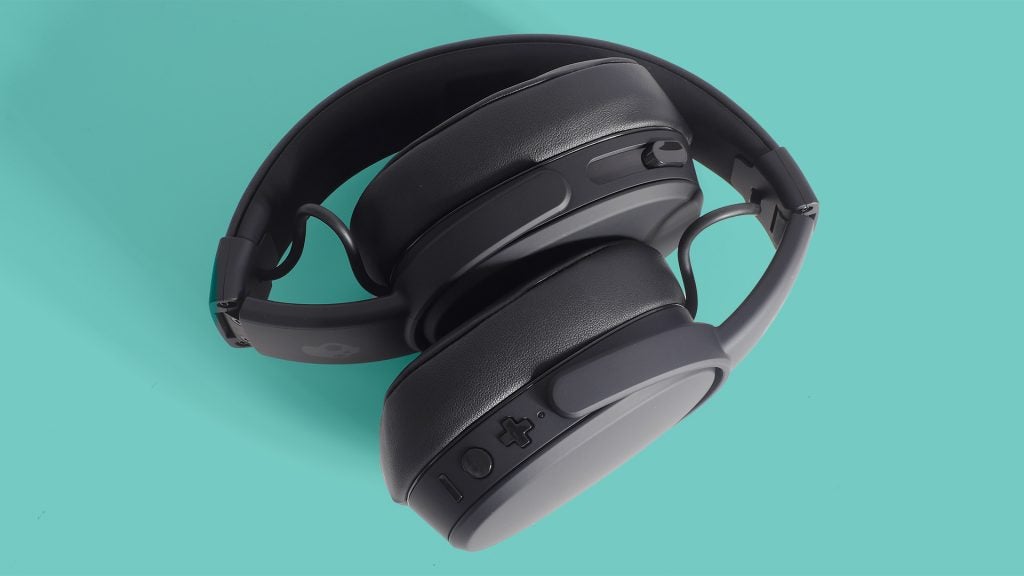 In some ways Skullcandy has significantly improved the Crusher since their first generation, but the bass extender is as ropey as ever. It’s a gimmick.

There are practical side-effects too. Tapping the cups causes the resonant sound of a twanged spring. This suggests it may be somewhat similar to a reverb chamber. Even hard footfalls can set this feedback off. That said, I wore them on the treadmill at the gym and while occasionally audible it didn’t ruin my music. 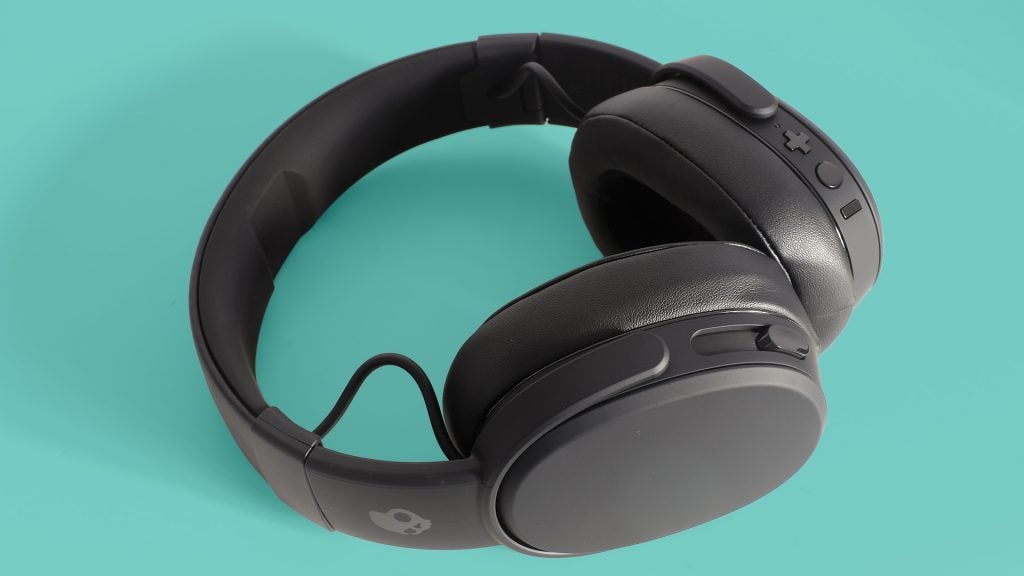 The Skullcandy Crusher Wireless base sound is much better than that of the bass chamber, though. These are perfectly satisfying wireless headphones that sound similar, but not identical, to the Hesh 3.

They are bassy even when the haptic dial is turned down completely. There’s some slightly clouding mid-bass but nothing that makes the Crusher sound murky. It’s enjoyable, just lacking a little control and sophistication.

The treble is very prominent too. When the haptic bass is used, it doesn’t get lost completely. This is likely the idea. Treble is a little brittle, a little unrefined, but not hugely sibilant or harsh.

This criticism of the treble sums up the sound’s limitations. It’s not that subtle or refined, but does generally give you a good time. 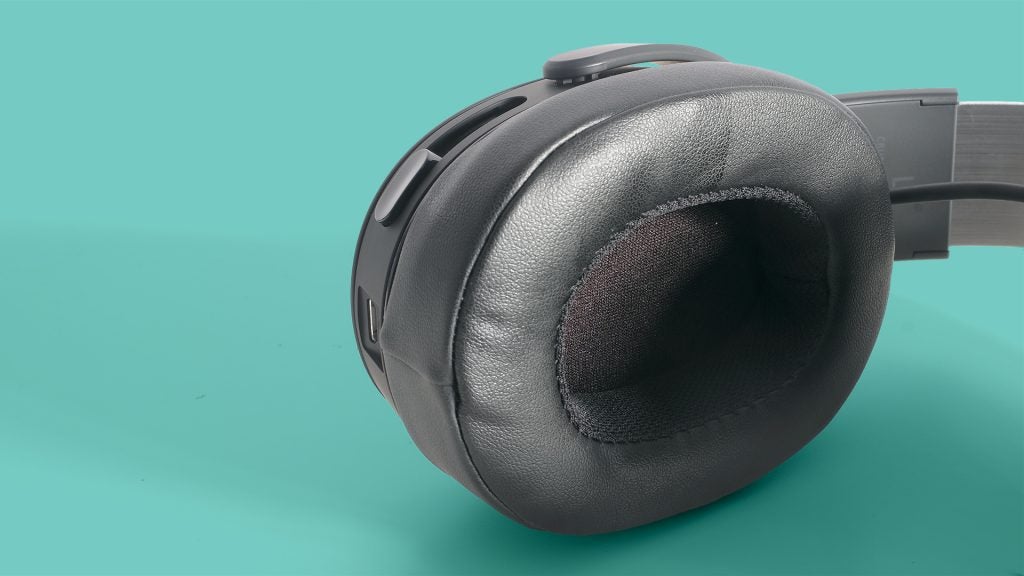 The Skullcandy Crusher Wireless have plenty of energy, the soundstage is reasonably wide and there’s more to the mids than an amorphous mass. Although when rendering vocals, the treble does take on much of the responsibility for detail and texture thanks to their greater presence.

Like the Hesh 3, the Crusher Wireless’s tone also tends to emphasise the high frequency noise introduced by the headphones’ electronics and/or wireless signal. However, it’s less noticeable here than in the Hesh 3, which is slightly surprising as these headphones have even more treble energy.

The Crusher Wireless aren’t close to “best in class” with their unadulterated sound, but I’ve enjoyed them, and they don’t have any glaring tonal issues. 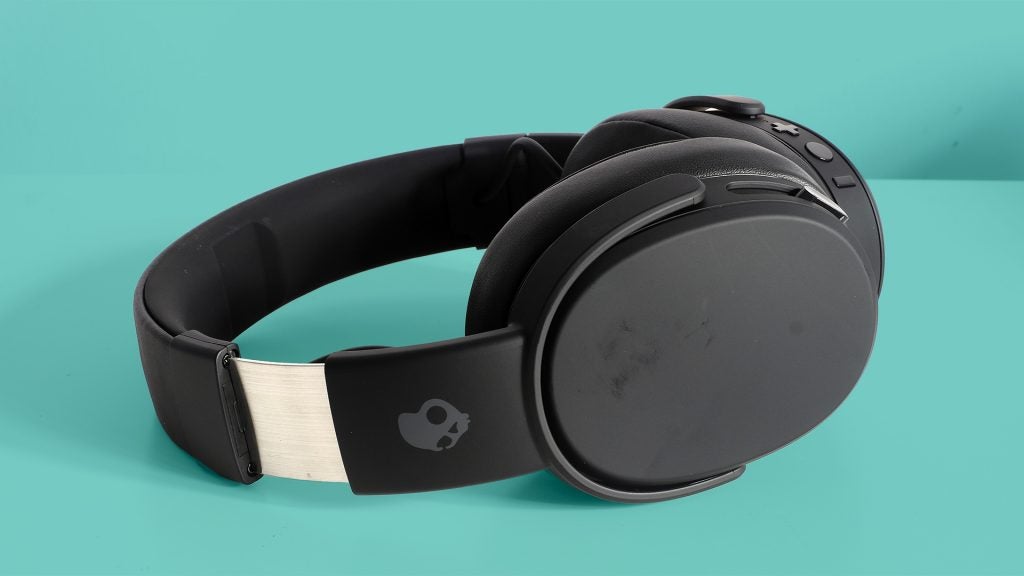 Why buy the Skullcandy Crusher Wireless?

The Skullcandy Crusher Wireless are solid mid-price wireless headphones. But only as long as you completely ignore their reason to exist.

Their haptic bass chamber sounds like loads of fun on paper. But in reality it’s a gimmick more likely to give you a headache than bass thrills. At a push it might work for explosions in a movie or game, but you’ll have to dial it back down again to be able to hear the dialogue clearly in-between.

Bassheads would be better off with the Urbanista New York, which have gut-punching sub-bass. Or you could just buy the Hesh 3, which are cheaper and leave out the haptic bass feature.