What are the Skullcandy Crusher headphones?

The Skullcandy Crusher are rather unusual headphones. As well as a normal headphone driver, they use a separate subwoofer in each ear called the Sensation55, powered by an AA battery. This is designed to blast your brain with low-end power. And it sure does. However, it’s fundamentally a bit of a gimmick and both the sound and build quality don’t really match up to the £89 asking price. 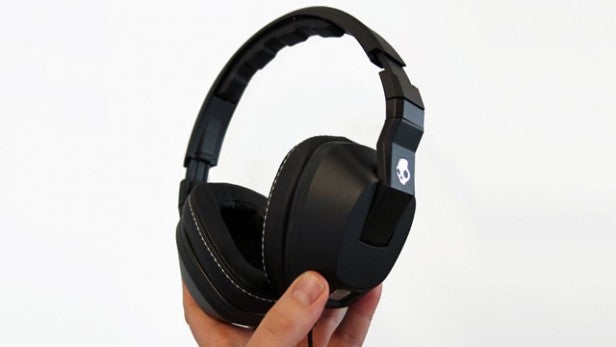 The Skullcandy Crusher are full-size headphones that are all-black (white and red models are available) and made of plastic. By Skullcandy standards, they’re reserved-looking.

There are little silver skulls on the earcups and silver ports for the sub drivers on each side, but from a company that makes some of the gaudiest headphones on the planet, the Skullcandy Crusher headphones are pretty normal in appearance.

Build quality isn’t particularly impressive, though. They’re light (not a bad thing as such) and plasticky, and the fake leather that tops the Crusher padding is as convincing as Keanu Reeves’s English accent.

Still, comfort is fine. The pads are generous and reasonably soft, there’s enough wiggle room in the headband to make it fit just about any head and the headband doesn’t dig into your skull. They grip your head with at least a moderate force, but you can wear them for an hour or so happily enough.

One slightly oddity is that tapping the side of the earcups produces a weird vibrating effect – like tapping a tuning fork – because of the way the subwoofer driver works. However, it isn’t caused by just walking around with them on so it’s not a major issue. 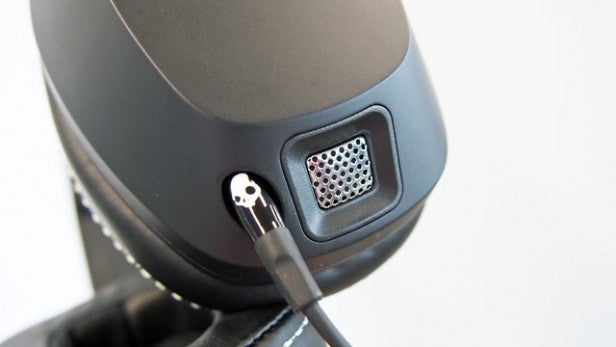 The Skullcandy Crusher have a removable 3.5mm jack cable that features a ‘universal’ remote with a single button (remotes like this are much easier to make compatible with Androids, Windows phones and iPhones alike). Like the rest of the headphone hardware, the remote feels a bit cheap.

The way you turn the extra bass function off is pretty rudimentary too. There’s a plastic slider on the left earcup that alters the level, and turns it off completely if not required. The implementation of the battery is fairly good, though. The AA battery needed to power the Skullcandy Crusher headphones lives under the right ear pad, which is kept in place with a clip. Switching batteries reveals once more that these headphones are a bit flimsy, but it’s a subtle way to hide an AA. And is much better than trying to fit a battery box along the headphones cable.

The Skullcandy Crusher headphones use two different kinds of drivers – a normal pair and an unusual pair, there to supply additional bass.

With the extra bass feature set to ‘off’, sound is fairly good. Treble is slightly coarse, but sound balance is good, and bass response is generous without being wildly over the top. They’re bass heavy without being offensively so.  There is significant treble roll off, though, and dynamics are not as good as some other ‘normal’ headphones at the price. They sound slightly flat.

The Skullcandy Crusher cans sound like a decent £40-odd pair of headphones, showing that you do – of course – pay for their defining feature, the bass engine. It’s not a normal headphone driver by any stretch of the imagination. It vibrates a lot more than a standard headphone speaker, which is how it’s able to create quite as much air movement as it does. 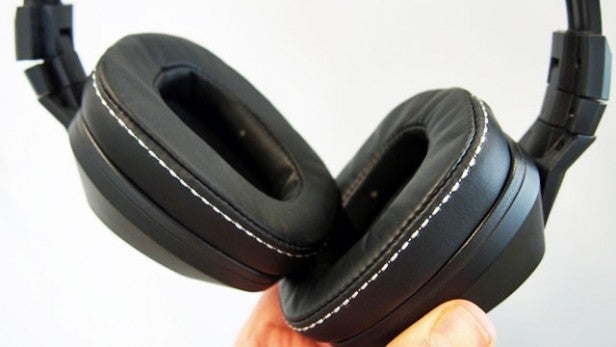 If you’re looking for club-style thumping bass, the Crusher headphones do provide it – and when maxed out they pump out a serious amount of the stuff. They do so with a force that you simply cannot replicate with a standard headphone driver.

It’s pretty effective if you’re looking to give explosions in films or games more of a thrilling impact, but approached from a pure sound quality perspective, it’s much less of a success. The bass is powerful, and as it is effectively completely abstracted from the rest of the sound, it’s marginally less muddying than it would be in an (e)xtreme bass pair of normal headphones. However, it’s not fast or taut. Good bass is gone as soon as it appears – it makes a clean exit. The Crusher bass blooms out like Play-Doh squished through a spaghetti-maker.

Again, it’s a good impression of that ‘standing outside the club’ experience, but anyone who thinks that is what good sound is really about has got it all wrong. But yes, it is quite fun and does add something to the experience of things other than music.

We also found that battery life (predictably) didn’t get near to the quoted 40 hours when the level of vibration is cranked up. And for the price we’d rather have seen an integrated battery included.

Should I buy the Skullcandy Crusher?

The Skullcandy Crusher are ultimately a bit gimmicky. We’ve seen vibration headphones before, but the feature has traditionally been jammed into gaming headsets, where it frankly makes more sense.

Sounding flabbier – if more powerful – than a good ‘basshead’ set of headphones, and lacking the build quality we expect for £90, we recommend thinking twice before investing in the Crushers. However, for maximum thrills in films and games, they are still worth considering.

The Skullcandy Crusher headphones are interesting and provide the supercharged bass they promise. However, they’re a bit expensive given their sound quality and build quality isn’t great either.

Next, read our round-up of the best headphones