Available on iOS
If you want to truly shock your audience, kill off a main character in the first hour. That’s the view some of Hollywood’s greatest directors have upheld over the years, with the strategy most noticeably deployed in Alfred Hitchcock’s Psycho, where Marion Crane – who was pitched as the film’s lead in everything from cinematic trailers to movie posters in the run up to its release – was slashed in the shower just 45 minutes or so into the piece.

It’s a clever way of unnerving your paying customers, shaking their foundations in regards to what they can expect from then on early on in the experience. Or, in the case of Skiing Yeti Mountain, it can just be extremely funny.

The first few stages of this icy adventure initially see you take instruction from a mysterious man called The Pathmaker – a mountain chieftain, if you will, who appears full of wisdom and, as you imagine at the time, is likely to pop up throughout the game as a means to explaining new features and challenges contained within. And then, a couple of levels in, he gets eaten off screen, his entrails left melting on the snow as the game quickly moves on to introduce a replacement, the ever cocky Gary, who serves as both your prophet and protagonist as you move forward.

Just like Psycho, however, it’s a move that signifies the kind of tone Skiing Yeti Mountain looks to take throughout, and while its own particular brand of downhill skiing is no walk in the park, it certainly doesn’t take itself too seriously when it comes to how it pitches its play. 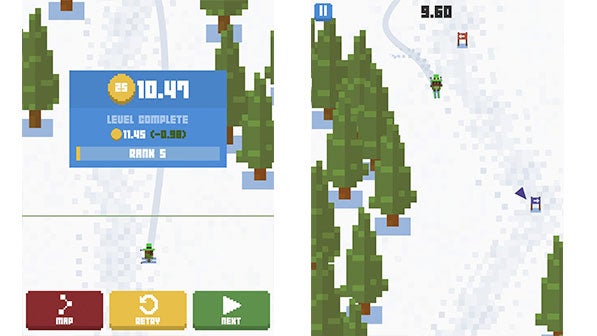 It’s this light-hearted nature that also bleeds through into the game’s pixel-art design, which – though especially common on the App Store in 2015 – feels utterly appropriate here, actually aiding play rather than merely decorating it. It’s entirely reflective of the straightforward nature of the gameplay itself, which relies entirely on just one input from beginning to end. By default, your descent down the slopes is handled by your thumb, placed at the bottom of the screen as you slide down from the top. The idea is to tip it left and right to cause your skier to do the same as he slips and slides his way through a series of gates, passing the red ones on the left and the blue ones on the right. Do it in a quick enough time and you’ll unlock the next stage in what is an unashamedly linear adventure.

This is, essentially, Skiing Yeti Mountain’s challenge from start to finish. Though Gary (and an assortment of other characters) pop up every now and again to introduce a new facet of play, they are little more than a sideshow: if all you want to do is slip down the slopes without paying the game’s plot – intentionally light as it is – then that’s entirely possible. There are some nice trinkets you can unlock, too (amusing garments you can equip as you go), and the stages naturally start to get trickier, with jumps to fly off, icy patches to avoid and pesky trees standing tall in your path. 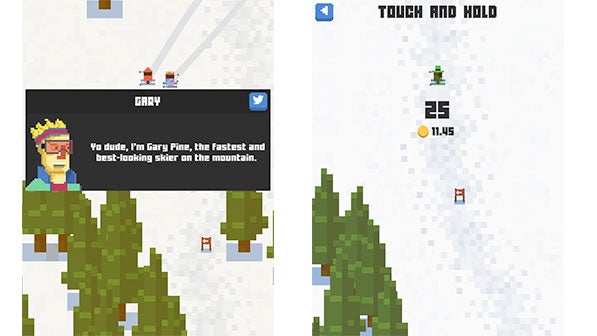 Once you’ve honed the motion of sliding left to right, taking each gate in quick time as you go, then you have essentially unlocked all Skiing Yeti Mountain has to offer – and that is both a strength and a weakness. On the one hand, it makes it the perfect game to pick up in a spare five minutes: there’s no fuss, no nonsense, and you can carry on where you left off without any internal debate. However, at the same time, it does mean that any attempt to take on two many levels in one run does leave you feeling a touch hollow. One level much resembles another and, if describing to a friend an area where you’d become unstuck, you’d be hard pressed to offer any clues as to your location beyond “well, there’s lots of snow around and some trees on either side”.

Nevertheless, as long as you’re aware that this is largely a one trick pony as you go into it, then this is unlikely to cause all too many problems. When Skiing Yeti Mountain doesn’t look to take itself too seriously, it seems rather churlish to attempt to judge it on those terms, especially when the slice of slip and slide it has to offer takes you anything but downhill.

Verdict
Easy to pick up and just as immediate to enjoy, Skiing Yeti Mountain’s downhill derby makes no attempt to take either itself or its chosen sport all too seriously, but it’s cast of amusing characters and simple yet steadfast challenge make it easy to like, even if it’s charms will likely wear off long term.