I think that EA’s Canadian Black Box studio must have had a tough job with this one. How do you take Skate – a game that reinvents a genre partly by stripping it back to its essence – and improve on it by adding new features? Do you risk meddling with a control system that most players considered nearly perfect? Do you make changes to a game design that Skaters and non-Skaters alike adored? Can you take Skate in a new direction without wrecking what made it so special first time around? 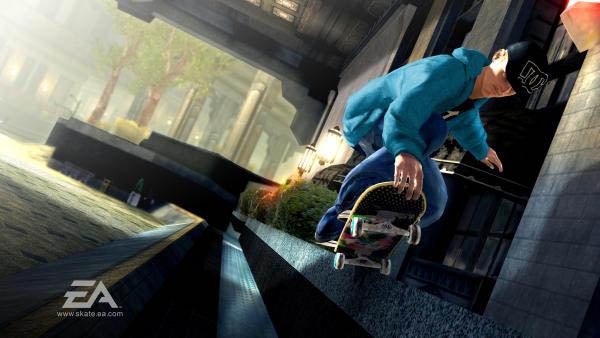 Not everybody will like the answers that EA Black Box has found to these questions. Those who loved Skate for its purity may well feel that, with Skate 2, something has been lost. For most of us, however, this is a superb sequel to an exceptional game. As far as I’m concerned, it’s the best skateboarding game I’ve ever played.


Don’t worry – despite what you might have heard and despite what you might fear from the ‘edgy’ intro movie, Skate 2 hasn’t gone down the Tony Hawks Jackass humour and gimmickry overload toilet. The emphasis here remains on authenticity. The graphics still have the gritty, Skate-video style of the original game, and if you were feeling picky you might even say that the rather plain textures and architecture could have done with a little more gloss. While there is a slightly half-baked storyline that sees your character released from chokey and out on the streets of a californian city dominated by corporate security (boo, hiss), it’s not something that’s constantly shoved in your face. In simple, minute-by-minute terms, Skate 2, like Skate, is all about the real experience of skating. 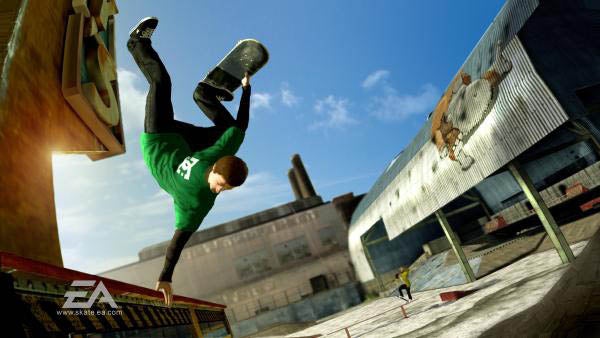 The control system is much the same as before, with the left stick controlling your boarder and the right handling balance and the board. You still pull the right stick down to crouch then flick it up or around to trigger an olly or a kickflip, and still grab by clutching the right trigger. Arguably, Skate 2 does an even better job than its predecessor of simulating all the minute interactions between rider, board and environment that give skateboarding its feel. It’s all so smooth, so natural, so subtle and so right, while the challenges that make up the heart of the game still feel tied into skateboarding as a real activity, rather than a basis for video-game theatrics. The only difference with Skate 2 is that the sequel gives you more avenues beyond your basic trick challenges and showcase events. Above all, Skate 2 hasn’t lost the thing that made the first game so special; merely skating around town, doing grinds, spins and flip tricks off the architecture and the street-side furniture, is entertaining in itself. You can waste hours without really making progress, just having a good time.

It helps that the game’s urban open world setting, San Vanelona, is a more interesting place this time around. EA has redesigned the city to add more slopes, more undulating park and pool areas and – best of all – more huge jumps and fiendish downhill runs. There are some spectacular and hair-raising routes out there if you take the time to check them out. In fact, the game gives you license to by adding a new ‘death race’ class of event where, instead of competing for points in a tournament or completing specific trick challenges, you’re racing for pole position through hairpin turns and streams of traffic at potentially neck-breaking speeds. These events break up what can sometimes feel like a very exacting, rather technical game, and give the physics engine a chance to show some brutal ragdoll dynamics. If you’re struggling in a particular challenge, there’s no better way to unwind. 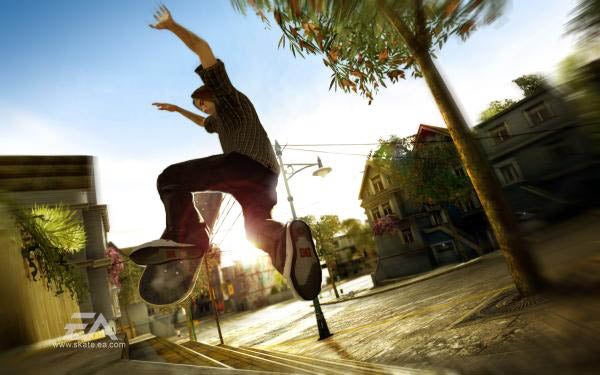 There’s a little more Jackass-style tomfoolery in another added feature: the Thrasher Hall of Meat. All of us make mistakes – and sometimes ones that result in catastrophic but amusing injuries. Skate 2 allows us to capitalise on them with a cash bonus and a place in the aforementioned league table of pain, with the full extent of your injury detailed before your wincing eyes. As before, there are also cash prizes for competitions, plus photo shoot and video shoot challenges, and all this loot can be spent on new boards, new trucks and new apparel for your skater. It might be an excuse for gratuitous product placement, but it makes the whole thing feel that bit more real.


Where Skate 2 comes closest to Tony Hawk’s territory is in the new emphasis on security, and the new ways of getting round this. It appears that the villainous corporation ‘Mongocorp’ is tightening up on skateboarding in San Vanelona, putting barriers and locks on prime tricking or grinding spots, and patrolling areas that every red-blooded skater would love to traverse. In some cases doing so is just a matter of avoiding guards, but in others you’ll need to call in help from fellow renegades to remove Mongocorp obstructions or block Mongocorp security. At times this threatens to spoil the spirit of the game, but most of the time Skate 2 stays on the right side of the silliness line. Plus, with several missions usually live at any one time, you don’t have to explore too much of this stuff if you’d rather just concentrate on skating. 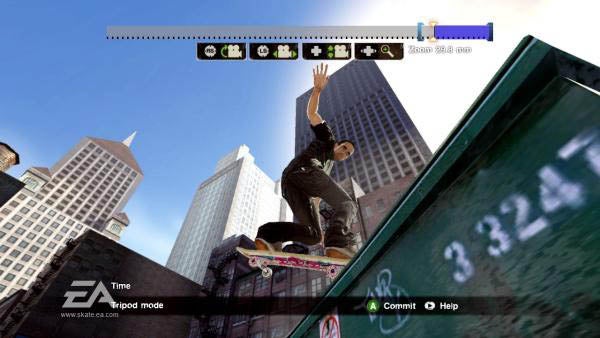 Beyond this, Skate 2 introduces a range of other enhancements, some small, some large. The old system of session markers, for instance, remains, giving you the ability to ‘mark’ a spot and return to it instantly – always handy when you’re being asked to pull off a trick over a particular object. However, you can now travel further from this spot without experiencing an annoying loading pause when you return. The old line-up of tricks has been expanded, with handplants and footplants now firmly on the menu, and you can – finally – get off your board. This seems like a small thing, but it makes a big difference when a flight of stairs stands between you and your next objective, and it hides a deeper purpose. While dismounted you can grab and drag around certain elements of the scenery, helping you position ramps, rails and dumpsters to create the setup for that perfect line of tricks. At times the game cleverly uses this as a kind of puzzle; you can only complete the challenge if you set the scene correctly first.

As with Skate, the biggest potential problem is the difficulty level. Skate 2 has made attempts to remove some of the spikes the original game threw up – there are fewer challenges where you must complete one specific trick followed by another, for example – but this can still be a very demanding game, and one where you’ll have to devote a serious amount of time to understanding the nuances of controls and completing some of the more strenuous challenges. It can be hugely frustrating to think you’ve completed one competitive event only to find that it’s actually a best of three, and there are times where a high-scoring trick from a computer opponent will knock you into second place at the very last minute, causing mucho grinding of teeth and throwing of controllers. All the same, there’s something so compulsive about Skate 2, and so satisfying when you complete one of these trials, that you can never quite bring yourself to give up. Skate 2 is a serious time sink. It will take you hours and hours of play to get the best of it, and if you don’t get violently frustrated from time to time, you’re either a skateboarding genius or a saint. 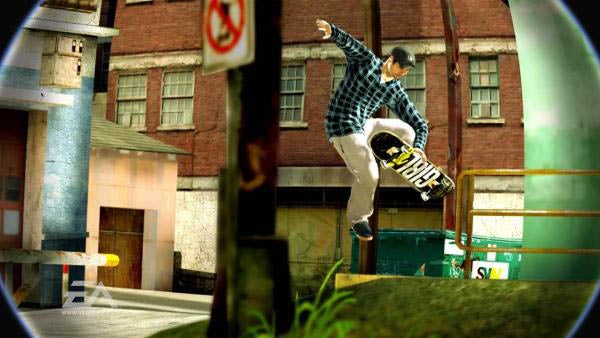 Still, when you do get it right there’s ample opportunity to show off online. As before, the Skate Reel feature constantly saves the last minute of action for you to playback and edit, and you can post clips online to share with friends. I haven’t had much opportunity to explore the other online options, but if you want to get involved in online trick battles or create a benchmark score for an area and ‘own the spot’, then Skate 2 is right behind you. 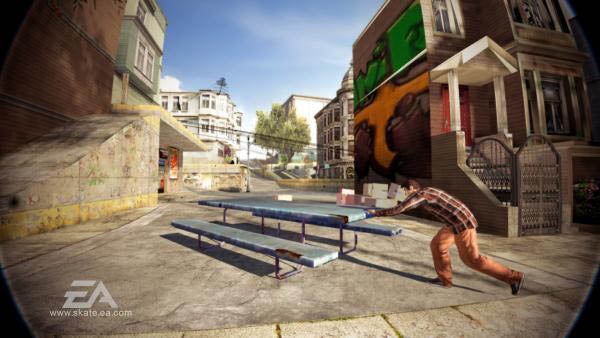 Overall, EA Black Box should be congratulated. At several junctures, Skate 2 puts itself at risk of going off message and losing its appeal, but for the most part this is an intelligently handled evolution of the first game that adds to the fun factor without steering the series in the wrong direction. No one enhancement is a killer feature in and of itself, but taken together they make the game that little bit better. And given that Skate was already the best skateboarding game in town, that’s enough to make the sequel practically essential to anyone with an interest in that world.


Skate 2 edges closer to Tony Hawk’s tomfoolery than the original, but thankfully never crosses the line. With a more interesting environment and some enjoyable new features, it takes Skate’s place as the best skateboarding game around.