Pity Neversoft and the Tony Hawks series. For a long time – maybe too long – it had the skateboarding genre to itself, the series growing bigger and better, then steadily declining into a grungy, prank-obsessed parody of its former self. Then last year, with Tony Hawk’s Project 8, the brand seemed to have turned a corner. The graphics were brilliant, the free-roaming world engaging, and with its ‘Nail the Trick’ slowmo feature the game had its best new concept in years. Normally, with only a month to go until the release of the next iteration, Proving Ground, anyone with an interest in skateboarding video games would be waiting with bated breath.


Instead of which, we’re all playing Skate. 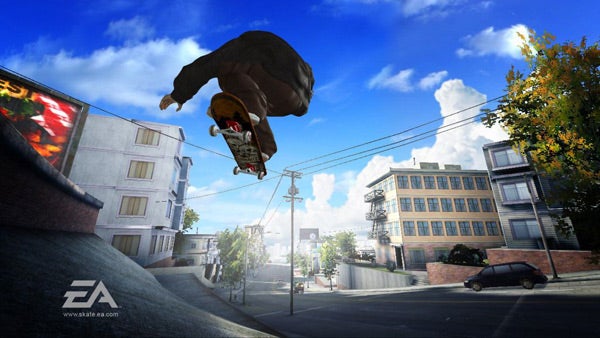 You have to hand it to the much-maligned EA. It has taken a genre dominated by a hugely popular property and – instead of making basically the same game with traditional EA high production values – comprehensively reinvented it. That Skate is good is a surprise. That Skate is this good is practically incredible.


Realism is the keyword here, and that starts with the graphics. THP8 had marvelous visuals, superb animation and wonderful lighting, but Skate now makes it look like a cartoon. The urban settings, architecture and textures are fantastically detailed. The characters, their clothes moving as they skate, are far more lifelike in their modeling and their animation. The lighting is that much more natural (in a sunny California kind of way), and the whole environment looks more cohesive. What’s more, EA has reworked the viewpoint, bringing it closer to the boarder, lower to the board, and slightly off-centre so that you get a great view of where you’re going and what you’re doing. From a vantage point so much nearer the ground, there’s a real sense of the interaction between board and surface, not to mention a much more tangible, physical feel to the game. 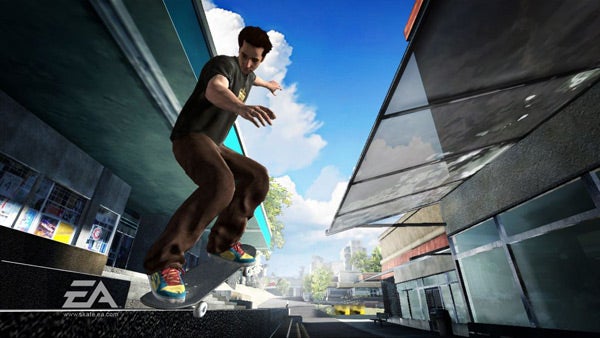 The setting, too, is closer to something that our Californian cousins might recognise as home. At times, THP8 played like a platform game, and you might say that its city has as much in common with real urban environments as the Isla Delfino in Super Mario Sunshine had with a real Caribbean island resort. The approach isn’t necessarily better – just different – but Skate’s more down-to-earth feel is a major part of its appeal. Maybe there are more skate parks in the fictional city of San Vanelona than you’d find in a real-life counterpart, but while there are grindable rails and makeshift ramps everywhere you look, at least they’re more believably integrated into the urban environment. There’s plenty to see and lots to explore, and still a sizable quantity of traffic and people getting in the way, getting knocked over or knocking you over just as you finish a particularly cool trick. It’s not that Skate does anything here that THP8 didn’t do well – it’s just that it does it all a little bit better. 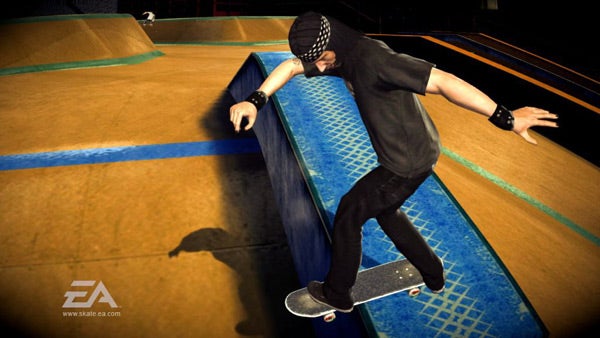 Tasks too, are more believable in EA’s game. There’s none of the bizarre feuding between rival real-estate agents that you found in Project 8, nor much of the Jackass-style tomfoolery that was, admittedly, such an enjoyable part of that game. Instead the emphasis is on realistic skate challenges and competitions, plus career-boosting photo opportunities and DIY video shoots. The main theme of the game is building exposure. Complete enough tasks and you’ll open up a major photo opportunity. Do what’s requested, and you’ll get some coverage in a mag. From there it’s onto new areas, new challenges and new possibilities. It’s a big game, but not one you’re forced to plough through at any particular rate. If you want to hang back, learn tricks, polish off every challenge and rack up ‘longest grind’ and ‘highest drop’ statistics, then Skate says ‘be my guest.’ If you’d rather just work your way through the major points, then that’s equally cool with the game. 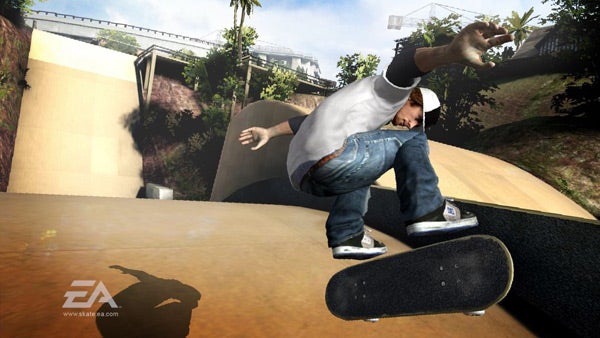 EA’s single biggest triumph, however, is the control system. After Project 8 it was hard to see how Neversoft’s ‘Nail the Trick’ slow-motion analogue trick mode could be bettered, but Skate has managed it by centering the whole game around analogue control. Everything from basic ollies through kickflips, spins, grinds and manuals is done through a combination of the left and right sticks, with only the odd move requiring some additional action on the face button or a grab controlled by the triggers. At first, it is depressingly hard to manage even the simplest stunts, but the system becomes surprisingly intuitive, surprisingly soon. You learn the nuances of moving the boarder with the left stick and controlling balance and board with the right, and everything falls into place. When it comes to the fundamentals of movement and pulling off tricks, Skate is both more satisfying than Project 8’s more conventional button-mashing techniques, and arguably closer to the fluid, second-by-second way in which skateboarders actually skate. 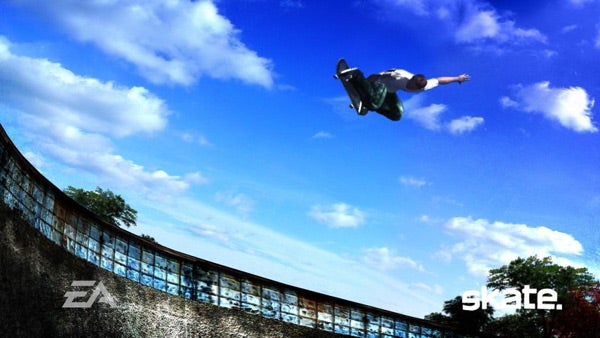 Admittedly, there are times when the stick controls can be less a blessing than a curse. When they demand sensitivity, they can be frustratingly awkward. For example, shifting from a kickflip (pull stick down then flick up and right) to a manual (hold stick just off centre) is sometimes a real struggle, which is why tasks where you need to do exactly that can be a serious source of joypad-tossing annoyance. The developers have had the sense to include a system of Session Markers – basically player-defined instant restart points – but while these cut down on the hassle of getting back to your approach and taking another run, they don’t alleviate the problem completely. This really is the only thing that pulls the game back from utter greatness for me. 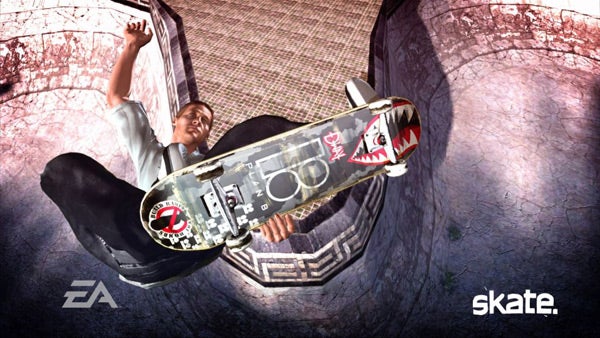 Still, this is really only a minor mark on a superbly implemented and innovative control system. Meanwhile, Skate matches or surpasses Project 8 everywhere it counts. It may not have the Birdman or his regular crew, but it still fits in a huge selection of pro skaters, authentic gear and branded apparel, along with a more flexible character customisation system based on EA’s established Game-Face system, as found in the likes of Tiger Woods 08. 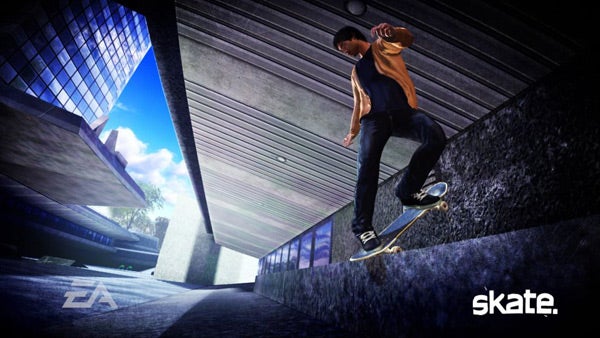 What’s more, online Skate is a beacon for how stunt-heavy games should do things in the HD era. We expect multiplayer modes, and Skate delivers, but then it goes further into the sort of territory you associate with Halo 3 or Project Gotham 4. In Skate all the single-player action is recorded and can be replayed. That footage can then be edited, stills can be captured, effects and slow-motion can be applied, and new camera angles selected. Then the results can be uploaded to EA’s online servers, ready to be shared with the world. There’s already a huge community doing just that, and I suspect that this – more than anything else – will give the game an enormous life-span, and a very loyal fan base. 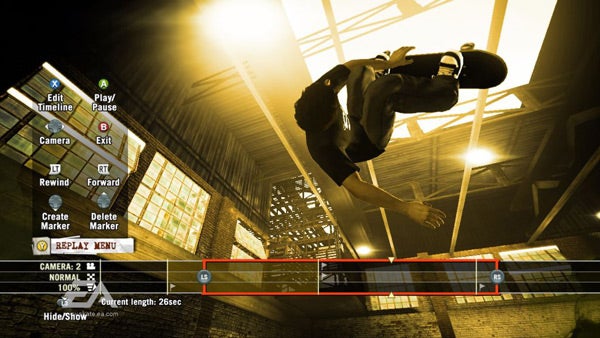 So there you have it. Skate is a fantastic skateboarding game, and the fact that it’s only the first effort from EA whets your appetite for what it might do to with the inevitable sequel. Does this mean Tony Hawks is finished? Of course not. There was an awful lot to like about Project 8’s less serious, more fun-loving approach, and hopefully we’ll see something new and exciting from Proving Ground. Just as there’s room for both FIFA and Pro Evo in the football genre, so there’s room for two games and two approaches to video-game skateboarding. After all, they say a little competition helps everyone excel.


EA comes out of nowhere to deliver the best skateboarding game around. The Tony Hawks franchise had better have something special if it’s going to compete with this.