Simple to install, the SimpliSafe Wireless Outdoor Security Camera integrates with the alarm system, acting as both a siren and a way for the call centre to verify the reason an alarm was triggered. Daytime footage is excellent, but night-time video was blurry in our tests, and the lack of options to set when the camera can and can’t record is a little disappointing.

The SimpliSafe smart alarm system partially relies on security cameras for its police dispatch service, with monitoring teams checking feeds to see if there’s anyone inside your home. Joining the existing indoor camera is the new SimpliSafe Wireless Outdoor Security Camera, which will record to your SimpliSafe cloud, provided you have an existing subscription.

On offer is a combination of quality daylight video, easy installation but a slightly frustrating lack of features. Still, if you have SimpliSafe installed in your home, then being able to add outdoor surveillance without having to pay any additional cloud fees could be useful.

A lozenge-shaped camera, the SimpliSafe Wireless Outdoor Security Camera looks similar to other wireless cameras I’ve reviewed, such as the Nest Cam (outdoor or indoor, battery). This model ships with a magnetic mount, which require two screws to hold it in place, to which the camera attaches.

This kind of installation – as with the Arlo Pro 4 – is undoubtedly simple, but it does make the camera easier to grab. If you prefer, there’s a tripod mount underneath, although a suitable camera mount isn’t supplied in the box.

Since this is a wireless camera, you’ll need to charge its battery via the micro-USB slot round the back of the unit. Or you can unscrew the front and pull out the battery to replace it, buying a second one (£29.99) that you can keep charged (batteries also have a USB slot). I find having two batteries useful; it means I can swap them out without any downtime, but this isn’t essential.

SimpliSafe also sells an outdoor power cable (£29.99), for those who prefer permanent power, or a solar panel (£69.99), which the company states requires three hours of sunlight per day to keep the camera charged. That’s an hour longer than is necessary with the Eufy SoloCam S40.

Although the SimpliSafe Wireless Outdoor Security Camera connects to your Wi-Fi network, you do need to have a SimpliSafe alarm system installed. Once you do, the camera gets its Wi-Fi settings from your system, and integrates into your alarm.

This process makes setup super-easy: just follow the quick wizard and the camera connects to your wireless network and is ready to go.

To use the camera and record footage you’ll need a SimpliSafe Pro Premium subscription plan (£19.99 a month). This allows you to install up to 10 cameras with unlimited recording. That’s more expensive than the equivalent Ring plan, but with this subscription, SimpliSafe will monitor your alarm system and dispatch the police automatically if your camera feed verifies that someone has broken in to your property.

For SimpliSafe to verify camera footage, you do have to set the SimpliSafe Wireless Outdoor Security Camera to allow for Video Verification.

From the app, control is similar to most other security cameras. Tap the Live feed button and you can see what’s going on, and even have a two-way chat with anyone you may have spotted.

Hit the History button and you’ll see a list of thumbnails comprising every instance the camera recorded motion. This list is useful for recent events, but since it has no date filter, getting to older events is a Herculean task in scrolling.

Alternatively, you can jump into the Timeline view, which shows all events (including camera and alarms), and has a date filter.

Video clips can be downloaded using the Share button. When you do this, the app asked what category the video fell under (Crime, Funny, Animal Activity or Other). Picking Funny, SimpliSafe then asked if I could share the clip, with the possibility that it could get shared on social media in exchange for two months of free monitoring. It’s an annoying message, and I couldn’t find any way to permanently disable the app bringing it up as an option.

Note that if you pick Crime as the category, SimpliSafe only asks for permission to view the video clip in order to offer advice. I’d still prefer the option to do nothing and keep my video clips private.

Out of the box, the camera is set to detect people only; but there is an option to change this to All Motion. That matches Ring cameras, but both Arlo and Nest cameras can spot vehicles and animals, too.

SimpliSafe’s detection is good enough for most cases. And, I found its detection accurate, with only the occasional false positive when there wasn’t really a person. Motion sensitivity can be adjusted, and you can add activity zones to further reduce notifications.

There isn’t as much control over when the camera records as I’d like, however. If you buy Ring cameras, you can have them turn on and off in synchronisation with the Ring Alarm’s mode, while Arlo cameras offer scheduling and geolocation through their modes.

With the SimpliSafe Wireless Outdoor Security Camera, the only option offered is to turn off motion detection manually when you don’t want the camera to record. There’s also an option to turn off notifications, although the camera will continue to record.

The latter mode uses more power, so will drain the battery more quickly. According to SimpliSafe, batteries should last between three and six months on average, depending on how active the camera is. My results tally with that, but my advice is to position the camera carefully so that it only focuses on your property, ignoring any busy roads or passersby.

Finally, the camera integrates with the SimpliSafe alarm. If the alarm is triggered, the camera’s 80dB siren will gooff. That’s helpful, drawing more attention to the fact that your home is alarmed.

The SimpliSafe Wireless Outdoor Security Camera’s 140-degree lens is wide enough to capture a good amount of the outside, without having to be too careful where the camera goes.

It shoots in Full HD, and during the day footage is about as good as you can expect from a Full HD camera: it’s well exposed, sharp and you can clearly see faces in the frame.

At night, the camera shoots much softer video, and I was a little disappointed by the spotlight and full-colour night vision. Even with the garden lights turned on, the video lacked detail and was very noisy, obfuscating detail. You can see what’s going on, but much of the detail is missing.

If you have a SimpliSafe alarm system and pay the monthly subscription, this is a useful add-on.

If you want the best quality footage and more control over when your cameras record, then look at the Arlo system or other alternatives.

The SimpliSafe Wireless Outdoor Security Camera is a bit of a mix. It’s easy to set up and the integration with the alarm system is neat. During the day, the quality of the video it captures is excellent. However, night-time footage is a little disappointing, and the lack of options to set when the camera can record is frustrating.

If you have a SimpliSafe alarm system then this is a useful addition, but in terms of quality and features, the Arlo Pro 4 is better, and you can find other alternatives on my list of best outdoor security cameras.

Unlike other sites, we test every security camera we review thoroughly over an extended period of time. We use standard tests to compare features properly. We’ll always tell you what we find. We never, ever, accept money to review a product. 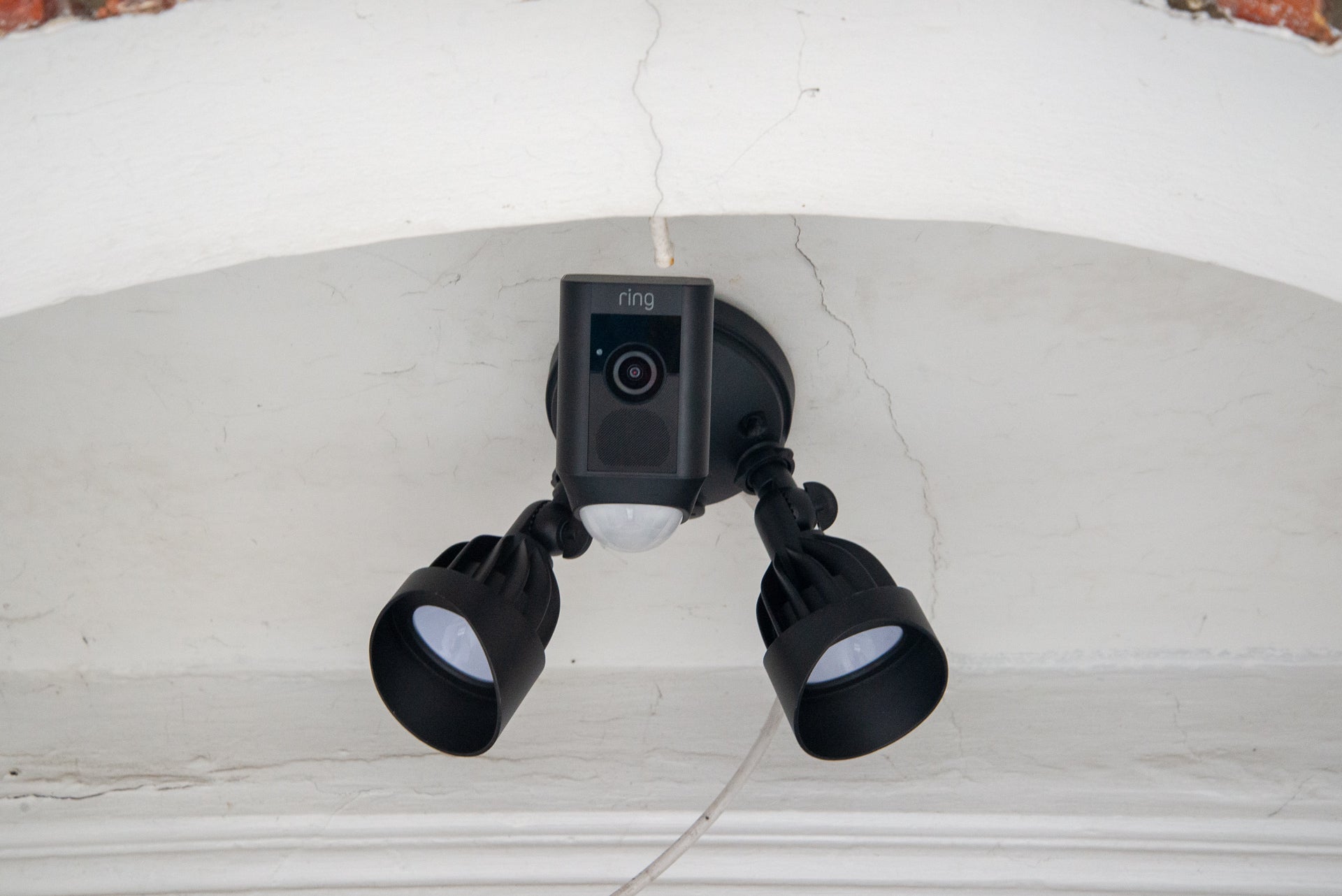 Can your CCTV record the road and can you share the video?

Three to six months from a charge, although how often the camera records will affect this length.

Do you need an alarm system to use the SimpliSafe Wireless Outdoor Security Camera?

Yes, you have to have the SimpliSafe alarm; the camera doesn’t work standalone.

How do you set up the SimpliSafe Wireless Outdoor Security Camera?

Just follow the wizard and the camera connects to your Wi-Fi network automatically.