There’s something about the Nintendo DS that makes it perfect for retro remakes from a certain era. Perhaps it’s the fact that it’s the first handheld console to have something that can replace a point-and-click interface, and maybe it helps that the 256 x 192 screen resolution isn’t a million miles away from the old 320 x 240 VGA standard, but the thought of conversions from the golden age of PC gaming has a strong appeal. Age of Empires DS has already come and gone, while the news of a DS Civilization filled me with equal parts delight and trepidation – would I ever exchange words with friends and family again? Revolution is rumoured to be toying with the idea of a new DS Broken Sword game, and Blizzard has been gauging interest in DS conversions of StarCraft and Diablo. If only LucasArts would release DS versions of the Monkey Island games; surely someone can see a golden opportunity sitting there. 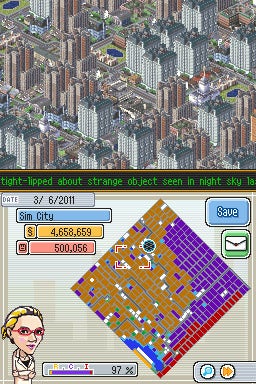 So it’s easy to see why EA has chosen to revisit SimCity on the format. Even if The Sims has stolen the glory from its forbear, there are still a lot of people out there for whom SimCity is a solid favourite. Really, if you liked SimCity in the old days, why wouldn’t you like a version you could take anywhere and play in the palm of your hand? In fact, SimCity DS sounds like many a commuter’s dream come true. You can build a city on your way into one.

And in some respects this is a very sensible conversion. The developers have placed the main city view – similar to the isometric 3D view from SimCity 2000 – on the top screen. The bottom screen, meanwhile, switches between a map view, a grid-style selection screen and the various data maps, graphs and budget screens. While in map view, you can drag a small rectangular panel around to scroll the main view from place to place, and by clicking on the zoom icon in the top-right corner you zoom into the grid view, where you place zones, buildings and roads. It takes a little getting used to, but after an hour or so you’ll be racing around the map and placing zones with the same sort of speed that you would have done using a mouse. There are, unfortunately, only two levels of zoom in the main and grid views, but given the resolution of the DS screens, anything further out would probably have been ridiculous. And though it’s sometimes hard to draw roads or add buildings as accurately as you might like (trust me, you’ll be reaching for the bulldozer a lot more than you used to) it’s not something that breaks the game.

In general, then, this is SimCity just as you know it: put in residential, commercial and industrial zones, add roads to link them together, make sure they’re all supplied with electricity and water, add police stations, fire stations, schools and other civic facilities, balance the budgets and watch your city grow. Roughly two-thirds of the effort is just zoning, and the other half financial. Keeping taxes low encourages residential, commercial and industrial growth, but the lower the taxes the harder it is to maintain public spending without putting your city coffers into deficit. 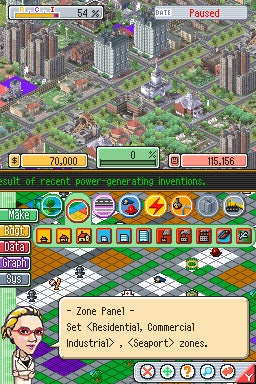 However, there have been some simplifications. Most of us won’t be sorry to see the end of the water systems – laying pipes and maintaining a steady flow was always such a hassle – and the only thing to worry about now is adding water towers and pumping stations near zones as appropriate. The game is also a little more generous with the electricity supply: as long as you group zones together you don’t need to worry much about adding pylons and cables, and you seem to be able to run a huge chunk of city from a single coal power station. Even the traffic doesn’t seem as complex as in previous versions. While the game nags you to add railways and other systems, you can get away with road networks for a surprising amount of time. 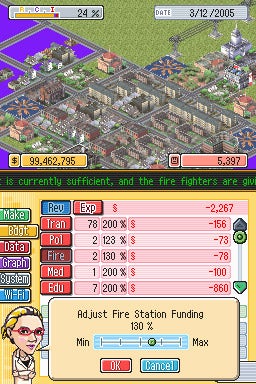 But SimCity DS has a problem: it’s a vaguely absorbing way to spend your time, but it’s nowhere near as compulsive as any of the original PC games. I think a lot of this comes down to the visual presentation. While SimCity DS resembles SimCity 2000 most of the animated detail, including traffic, seems to have done a runner. As a result, the sense of a living, breathing city that you had from the PC editions has gone. For most of the game your city seems eerily lifeless. More seriously, you don’t get that instant feedback on where you face crime or traffic issues, meaning you have to root through the data sheets to see what’s going on where. 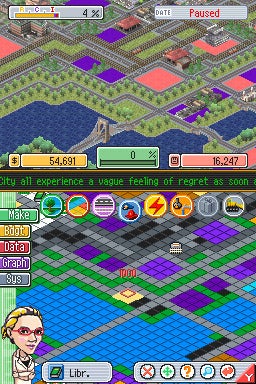 Other factors compound the problem. For some reason, the developers have chosen to pause the game while you’re building, budgeting and zoning. In a higher speed strategy game this wouldn’t be a bad idea, but in a game as relaxed as SimCity, it makes progress drag more than you might believe. In addition, you’re stuck starting the game at 1900, the initial line-up of buildings and facilities is fairly meagre, and the rate of technological progress is painfully slow, meaning that for long periods you’re stuck with a very limited set of items you can add to your city. Even disasters – always a rich source of entertainment – seem thin on the ground. As a result of all this, a once-compulsive game has been transformed into a vaguely absorbing one. With SimCity, is that really good enough?

Worst of all, EA has tried to restore life to the city through an array of ill-advised novelty game mechanics. Having an animated advisor on hand isn’t a bad idea, but her advice is frequently useless and not often pointed at the current problem you have on hand. You could probably stand her, however, were it not for the constant interruptions – and these only get more constant as the game progresses – where a citizen is waiting in your office with some request to add particular facilities or reduce taxes. These are poorly animated, tragically unfunny, and repeat on a regular basis over the course of the game. How many times did I want to see bronzed teen Candy in my office moaning on about her school run? How about never, and certainly not once every fifteen minutes until I had the money to set a rail network up. 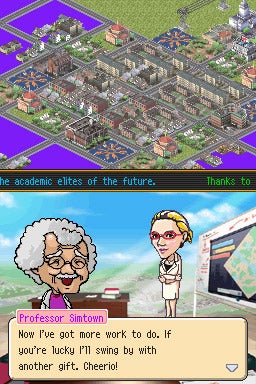 Why too, do we have to have arcade mini-games just because it’s on the DS? I don’t know about you, but I don’t play SimCity so that I can tap Santa Claus for presents as he flies across the skyline, or so that I can tap fireworks to make them go off during a city celebration. SimCity always had a sense of humour, but it never let itself get this ridiculous.


One final complaint: it’s all very well adding a bunch of disaster scenarios on top of the normal game mode, but why prevent you from saving the game during their duration? And why hamper your efforts by preventing you from adjusting the budget at any point? 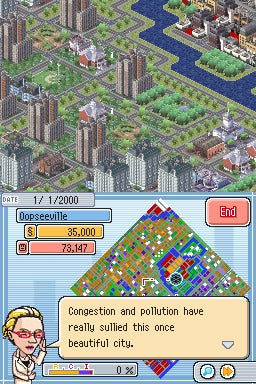 Overall, we’re left with something that has the bones of a good SimCity game, but is spoilt by the lifeless presentation of the city and by the introduction of several hideously annoying features. If you’re a serious SimCity fan of ages past, then there is a chance that you’ll be able to look past these factors and just enjoy the simple pleasures of zoning, building and watching your city grow. If, however, you’re looking for something fun to do with your DS, then there are a good two-dozen better options out there. Roll on Civilization Revolution, Diablo and StarCraft DS, but SimCity DS? For now, no thanks.


What at first seems to be a smart handheld conversion turns into a cramped and annoying attempt to DS-ify a classic. It’s still SimCity enough for the hardcore SimCity fan, but casual city builders should leave it well alone.