After looking at one point as if it was poised to take over the projection world like it has the TV world, LED lighting has surprisingly slipped back into the projector shadows. Only a single brand is still significantly putting its shoulder to the home cinema LED projection wheel: Sim2, as evidenced in spectacular fashion today by the M.150.

This sudden slide in LED projector popularity initially seems odd given that the technology delivers some notable advantages over other illumination systems. For instance, LED lamp systems enjoy immense (30,000-hour plus) lifespans and more consistent brightness over a lamp’s life, as well as pretty much totally removing the single-chip DLP rainbow effect usually seen to some extent with single-chip DLP technology.

However, LED lighting does also come with its own set of problems. For instance, it’s tough to get as much brightness out of LED lights as you can from other lamp types, and LED lamps don’t react well to the quite extreme temperature changes you can get inside a powerful projector.

Getting around such issues effectively apparently doesn’t come cheap – the Sim2 M.150 will set you back a rather eye-watering £19,995.

The M.150 does, though, very quickly get down to the business of justifying its price even before you take its LED lighting into account. For while its bodywork might lack the stunning high-fashion curves of Sim2’s Lumis and Nero models, it’s still a very striking looker indeed thanks to its unusually high, ribbed sides and its glass finish. In some ways it looks like the unusually affordable Sim2 Crystal 35 DLP projector on steroids – though that’s where the comparisons with the actually slightly disappointing Crystal 35 end. 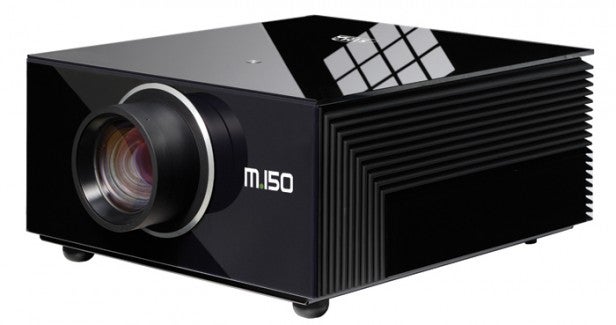 Another key element of the Sim2 M.150’s design is the enormous lens protruding unashamedly from the centre of the projector’s front panel. Even the most cursory of examinations reveals that this is a quite exquisite hunk of glass mounted in an uncompromisingly robust enclosure. In other words, it looks like precisely the sort of ‘business end’ to a projection engine that we’d hope to see on a £20k projector.

The control you have over this lens is outstanding too. You can optically adjust its focus, zoom and vertical or horizontal position via the remote with remarkable degrees of finesse. The range of focus and shifting available is also outstanding, making the projector outstandingly easy to adapt to almost any room environment.

The optical engine at the M.150’s heart is a full HD single-chip DLP affair, illuminated by red, green and blue LEDs. Intriguingly you can also call in an LED Overlap feature that runs two sets of LED lamps together to add cyan, yellow and magenta – though the main effect of this is to boost brightness for people lucky enough to be driving a screen much larger than the 90in model we used for our tests.

The M.150 continues Sim2’s gratifying love-in with 3D, using a ‘2.5 Flash’ fast refresh rate system to quash crosstalk. Also potentially very important to the M.150’s 3D performance is the extra 200 lumens of brightness Sim2 has managed to get out of its latest LED engine compared with its Mico 50 LED debutante of last year.

Please note, though, that 3D isn’t inbuilt as standard; instead you’ll need one of Sim2’s optional 3D kits comprising an external transmitter and varying numbers of of glasses. These kits start at £749 for four pairs of glasses and the emitter and go up to £1,500 for seven pairs and the emitter. Ouch. But then, if you can afford the best part of £20k for the projector itself, we guess another £750-£1,500 isn’t going to break the bank!

The Sim2 M.150’s extra brightness has been achieved without apparently reducing the vast lifespan of the LED lamps too, further reducing ongoing costs. Also you can even still turn the projector straight off without waiting for it to cool down – another LED advantage.

The video processing inside the M.150 is the same ultra-powerful affair found in Sim2’s Lumis projectors, and includes an element of it devoted to ‘smoothing out’ motion. Personally, though, we found the M.150’s motion handling to be so damn good naturally that we preferred to leave the PureMotion and PureMovie options switched off. 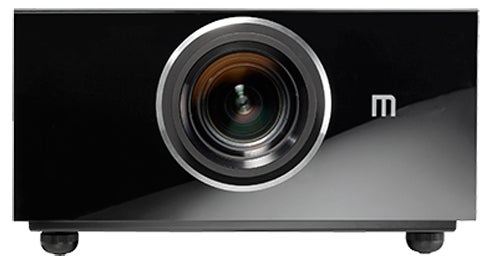 The Sim2 M.150 can have its pictures – especially its colour and gamma elements – calibrated to within a millimetre of their lives, just as we would expect of a high-end model distributed through custom installation channels.

The only bum note at this stage, really, is a familiar one with Sim2: the M.150’s operating system. For as well as having drab-looking and fiddly to navigate menus you get a depressingly plasticky, unintuitive remote control. Hardly the sort of user ‘front end’ such a premium product warrants. But to be fair, the projector will be installed initially for you, while day to day control could very well be achieved via a separate system controller, such as something from Crestron. 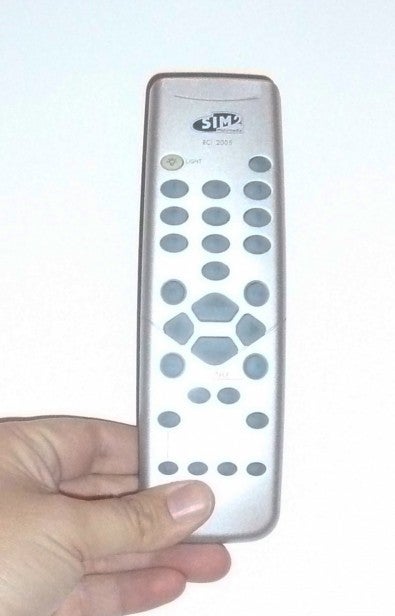 In action the Sim2 M.150 is deliriously good, emphatically surpassing the already-high expectations raised by previous Sim2 experiences. Particularly striking is how much better the M.150’s pictures look than those of the Mico 50, chiefly thanks to the extra brightness Sim2 has managed to eke out of the LED engine.

The advantages the extra brightness delivers are numerous. For starters, pictures generally look more dynamic, with some remarkably pristine and bold whites able to reside in the same frame as rich black levels. The extra brightness also helps the M.150 produce noticeably cleaner, clearer shadow detail in dark areas of the picture, making sure dark HD footage looks every bit as richly detailed and gloriously HD as bright footage.

3D Performance
The extra brightness further has a profound effect on 3D viewing, enabling the Sim2 M.150 to combat more effectively than the Mico 50 the inevitable dimming you get when you don a pair of Sim2’s active 3D glasses. This helps 3D images look more dynamic, more colourful, more detailed, and more full of depth.

Couple all this with the M.150’s complete freedom from active 3D’s dreaded crosstalk ghosting problem, and as with every other Sim2 3D projector we’ve seen, the M.150 provides staggering proof that 3D viewing in the home really can be an amazing experience rather than just the headache-inducing marketing gimmick it can appear to be on lesser products.

2D and HD Reproduction
Going back to 2D, the M.150’s pictures also benefit from more or less perfect colour response. Colours are immaculately balanced, almost infinitely nuanced, totally natural in tone (even in dark picture areas), and utterly free of any sort of noise or distortion. In other words, here again the M.150 is capable of delivering a ‘celluloid-like’ experience on a level we just haven’t witnessed before other than on the aforementioned Lumis 3D-S.

The sharpness of the Sim2 M.150’s HD pictures needs to be seen to be believed, too. Its images are so precise and clean, in fact, that the only Blu-ray scenes we’ve been able to find that do maximum justice to them are the shot-for-IMAX bits of The Dark Knight – most notably the opening bank robbery sequence. So extreme is the clarity on show here that we found it hard to believe we were just watching a normal HD feed rather than some sort of ‘super resolution’ source. 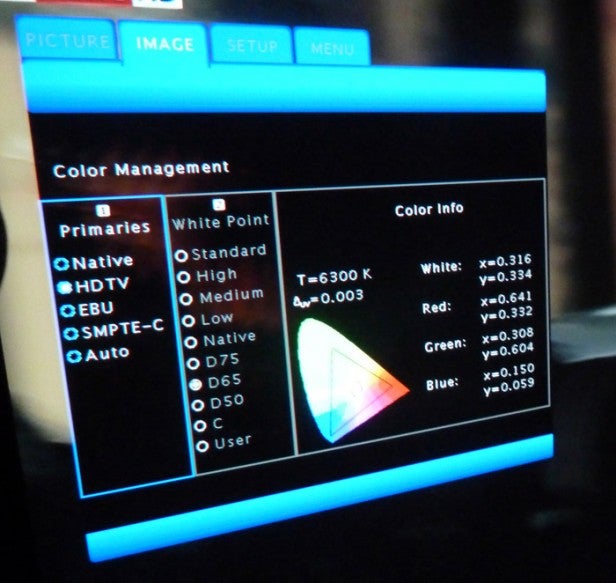 We guess one question that needs to be asked is if the M.150 justifies its extra cost over the non-LED £13,000 and £16,000 Sim2 Nero models. And the simple answer is yes. For starters, you never have to change the bulbs in the M.150 (a £750-a-pop process on the Neros). Also, the M.150’s images benefit from greater stability and slightly more natural motion reproduction (there’s really no need at all to use the projector’s provided motion processing options), as well as remaining free of puny amounts of rainbow effect that extremely susceptible viewers might very occasionally detect on the Neros.

The only other projectors in town that might potentially cause the M.150 any grief are the JVC X90 and the Sony VW1000ES. The JVC, it must be said, delivers deeper black levels than the M.150 can. But the M.150 more than compensates for this with the extra crispness and colour subtlety of its 2D pictures; by producing more shadow detail; and by rendering 3D with much less crosstalk than the JVC.

The £17k Sony represents a tougher challenge in that there’s no doubt that genuine 4k material does take home cinema projection to a whole new level. However, there’s precious little 4k material around at the moment, and while the Sony upscales HD to 4k quite nicely, the M.150’s HD detail levels are only marginally smaller, yet its pictures look more consistently natural and less processed. The Sim2 also delivers a richer black level response, especially when it comes to reproducing shadow details in dark areas.

Pretty much the only serious gripe we might raise about the M.150’s imperious performance is that it runs a touch more noisily than we’d like. But the extreme flexibility of its set up options means that your installer shouldn’t have much difficulty at all in positioning the projector so that its noise doesn’t trouble you at all.

Verdict
While LED lighting in projectors might not yet be catching on quite as much as we’d expected it to, the Sim2 M.150 proves that it remains every bit as impressive a technology as we first thought it was. In fact, the M.150 is probably the second best Sim2 projector we’ve seen behind the Lumis 3D-S, and you can’t say fairer than that.