Usually with a product costing 30 grand, give or take a fiver, we would expect to have our work cut out trying to explain just how or why any product, however good, might possibly justify costing such an extreme amount of money.

As a result, the 3D-S is probably the ‘easiest sell’ Sim2 has ever submitted for review, as it’s got a more immediate, visceral and easy to describe/see advantage over cheaper rivals than any other Sim2 projector before it.

It’s tempting to just leave the review there, other than to urge you to book an appointment to see a Lumis 3D-S in action for yourself as soon as possible. But then we guess anyone who might be even thinking of spending £30k on a home entertainment product deserves to at least know what’s going inside the 3D-S to makes it such a reference-level bit of kit. 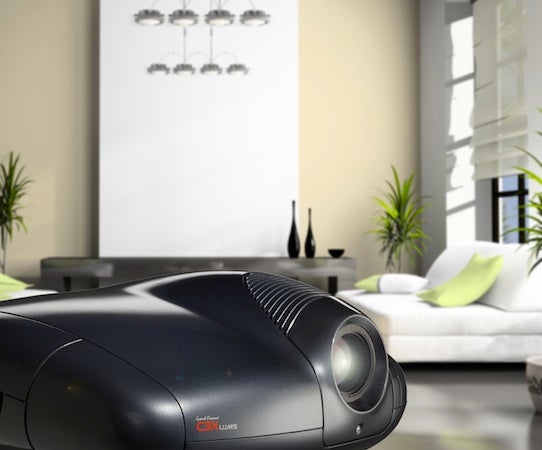 For a start, its design is extraordinary. Partly because it’s gorgeously sculpted and beautifully finished, but mostly because it’s unfeasibly compact for a projector carrying three 0.95in DarkChip 4 DLP chipsets, a 280W dimmable lamp, a little something called triple flash technology (more on this later), and active 3D playback.
After all, Sim2’s only previous 3D solution involved, rather less elegantly, literally stacking two Lumis projectors on top of each other!

The Lumis 3D-S’ connections are a bit less stand out, with their highlights of two HDMI inputs, a PC D-Sub port, and separate RS-232C and USB control options.  But in all honesty this is more than sufficient for a projector that will likely be integrated into a wider home entertainment system, complete with separate source switching and controls.

Plus there’s one further connection you don’t get on ‘normal’ projectors: a 3D sync output. It’s here that you attach the projector’s external 3D sync transmitter.

The 3D-S’ use of an external 3D transmitter seems rather at odds, perhaps, with the sublime elegance of the projector’s design. Especially as the external box is about as industrial-looking a device as you could imagine.

But having an external box arguably gives a professional installer a little more flexibility with siting issues (hiding the box will not be a problem an end user will have to face when you’re talking about a 30 grand bit of kit!). Also, during our tests we found the transmissive range of the external sync box to be pretty remarkable; even hiding it behind a box at the back of the room failed to cause any transmission issues.

Where things get REALLY interesting with the Lumis 3D-S is when you start looking into what’s tucked inside that almost obscenely curvaceous bodywork. For starters, you’ve got all the key, uncompromising optical elements that have served Sim2 so well for so long in the 2D world. We’ve already touched on the projector’s use of three large-form DarkChip 4 DLP chipsets, but there’s also the matter of Sim2’s patented ALPHAPATH compact die-cast light engine, complete phenomenal light efficiency and precision glass optics throughout.

Sim2 has additionally re-designed the assembly of the 3D-S electronics to enhance its 3D performance, and has – slightly surprisingly – introduced some ‘PureMotion’ video processing. This includes modes designed to optimize motion reproduction with the various demands of movie and sports footage, but also includes a system designed to improve motion with 3D.

Perhaps the single most important trick of the 3D-S versus other Sim2 projectors is its ‘3D Triple Flash’ technology. Previously only found in commercial 3D cinema installations, Triple Flash ensures that each eye gets three ‘flashes’ of a 1080p/24Hz 3D Blu-ray image frame, resulting in an overall frame rate of 144fps. Three-chip DLP projection is currently the only projection technology capable of delivering such a huge frame rate, with most rival technologies being limited to 120fps.

This is massively important for two reasons. First and foremost, the Lumis 3D-S’ extreme refresh rate per eye should eliminate that most dreaded of domestic 3D phenomena, crosstalk. But also it should kick into touch another massive objection to active 3D technology: flickering.

When it comes to setting the Lumis 3D-S up, meanwhile, your installer has an almost infinite amount of flexibility to work with. This begins with the availability of three different lens throw options, but reaches its true high-end zenith with Sim2’s advanced Live Colours Calibration 2 software – a system so comprehensive that it’s possible to achieve what’s effectively colour tone perfection in even the most difficult of installation environments.

While we’re on the subject of colour calibration, we should add, too, that unlike an alarming number of 3D displays, the 3D-S automatically switches its colour settings to suit 3D when operating in 3D mode. What’s more, your installer doesn’t even need to manually configure 3D settings themselves; instead Sim2 has measured the impact of its 3D glasses (two pairs of which are included with the projector) on the colours of its projector’s pictures, so that the 3D-S can automatically calibrate its 3D settings by applying the necessary ‘shift’ values to the settings established for 2D by your installer. Neat.

The net result of all the Lumis 3D-S’ extreme efforts is, as we couldn’t help but reveal right at the top of this review, extraordinary. The thing that hit us the hardest right away, like a 3D lightning bolt, was the complete absence of any crosstalk from 3D pictures. Seriously, there just isn’t ANY of the telltale ghosting at all, even during infamous crosstalk-inspiring scenes like the lantern sequence in Tangled or the bike fight in Tron.

Even Panasonic’s VT30 plasma TVs can’t claim total immunity to crosstalk during such scenes, so the 3D-S can fairly claim to be the first genuinely crosstalk-free domestic 3D display. And there really is no overstating the positive impact this has on 3D pictures – especially when you’re talking about 3D images plastered across screens hundreds of inches across.

And believe us when we say the 3D-S really can drive some serious screen acreage, even with its effective brightness compromised by the 3D glasses, thanks to the power of the projector’s lamp and the extreme efficiency of the projector’s light engine. This achievement would actually have been enough in itself to underline the 3D-S’ high-end status even without the complete freedom from crosstalk.

Given how bright the Lumis 3D-S can be with 3D footage, it’s also remarkable to be able to enjoy such punchy 3D images without a trace of flicker – again proving the worth of Sim2’s decision to engineer triple-flash technology into a domesticated projector for the first time.

The Lumis 3D-S produces immaculate levels of detailing and sharpness from full HD 3D sources, interrupted by seemingly no extraneous noise at all. Even better, the detailing is just as accurate and evident during dark scenes as it is bright ones, thanks to the 3D-S’ exceptionally strong and magnificently natural contrast performance. There’s no sense ever that you’re having to accept any of the brightness versus shadow detail resolution compromises you have to tolerate with most ‘normal’ projectors. 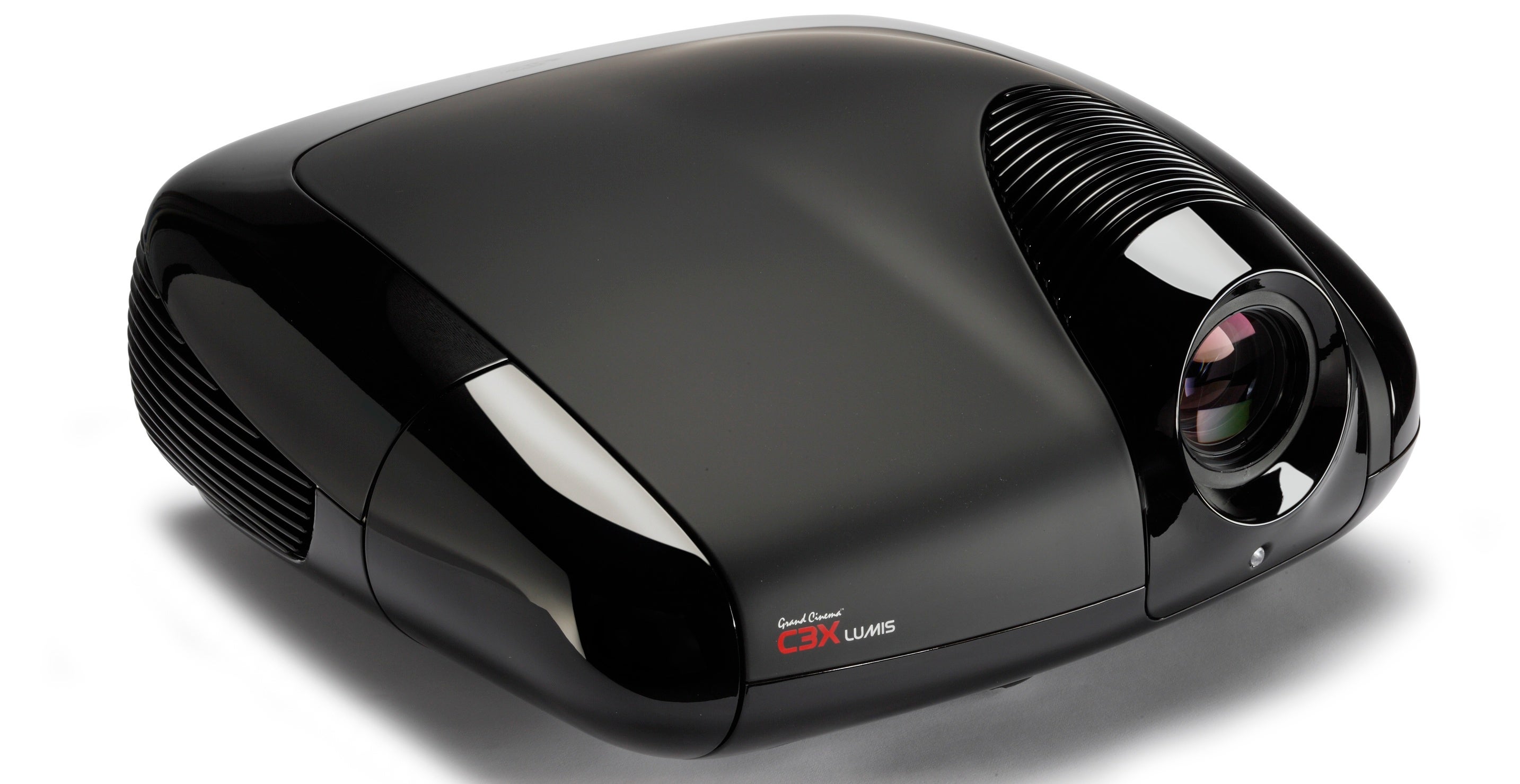 Colours look excellent in both 2D and 3D mode – unprecedentedly so where 3D is concerned – and motion looks natural and fluid even without using the actually rather unnecessary motion processing tools.

Obviously a projector of the quality of the 3D-S was ‘born’ to show HD, but needless to say Sim2 knows its onions and then some when it comes to upscaling 2D material and Sky’s reduced resolution side by side 3D broadcasts – so that they actually look good even on monstrously large screens.

You’ve probably got the picture by now that we’re rather enamoured of the Lumis 3D-S. But it’s our job to try and find fault with even the most perfect of AV machines. So: the 3D-S runs a little loudly, especially in 3D mode. And its remote control is badly organized; flimsily built versus the projector; and the same design as the remotes shipped with Sim2’s non-3D projectors, meaning it lacks any direct 3D controls.

But in truth neither of these issues really matter much given that a professional installer should be able to minimize the noise issues for you, while there’s a good chance that control of the projector will be taken over by some much more sophisticated centralized system.

Verdict
The Sim2 Lumis 3D-S isn’t just a great projector, it’s a genuinely ground-breaking one. For it delivers to the lucky few able to afford it the first truly flawless 3D performance ever seen outside of a top-end commercial 3D cinema – alongside, of course, stunning 2D pictures.