If we had to pick a brand in another market that most resembled SIM2, we’d probably plump for Stella Artois, with its ‘reassuringly expensive’ catchphrase. As a case in point, the last SIM2 projector we reviewed, the HT3000E, was undeniably brilliant but weighed in at a ‘cool’ £10k. And that’s nowhere near the top of the SIM2 range!


So it’s fair to say that the Domino D10 comes as a bit of a surprise. For at just £1,600 it’s miles cheaper than any projector SIM2 has ever launched before, and really can be considered a ‘mainstream’ product.


The idea is clear: the brand wants to open its doors to a whole new level of clientele in the hope that they’ll remain loyal and maybe step up to more sophisticated SIM2 products somewhere down the line.


We can’t help but be concerned, though, that ‘going budget’ is so far out of SIM2’s comfort zone that it might just feasibly make a right royal mess of it… 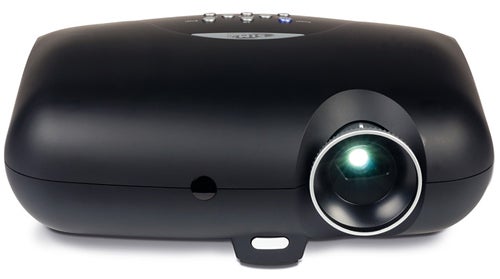 These concerns are reinforced as soon as you clap eyes on the DLP-based D10, as it really does look like the runt of the SIM2 litter. To be fair, this impression owes at least something to the fact that every other SIM2 projector is absolutely stunning. But even compared with the vast majority of its similarly priced rivals, the D10 is drab to say the least in its matt black finish and uninspiring curves. The best think you can say about it is that you certainly aren’t distracted by its physical presence while watching a film.


Also troubling is the discovery that the optical system at the D10’s heart is based around one of Texas Instruments’ DarkChip2 chipsets rather than the newer and better DarkChip3 arrangement found on one or two rivals we’ve seen recently. Rivals such as Planar’s slightly more expensive £1,700 PD7060 and the £1,500 InFocus IN78.


Our concerns are that the DarkChip3 system delivers better black level and motion response than DC2, and so the D10 would seem to be starting off already a step behind the best of its rivals.


However, the D10 does claim one element that might help it get back on at least an even footing: full BrilliantColor support. BrilliantColor is a picture-boosting system developed by Texas Instruments which, in its full incarnation, as apparently employed in the D10, combines both a processing element and a ‘hardware’ element in the shape of a special colour wheel that adds cyan, magenta and yellow elements to the usual red, green and blue.

We can’t think of a single other projector at anything like this point that offers the full BrilliantColor implementation – even the InFocus and Planar models we mentioned before.


Of course, this wouldn’t matter if BrilliantColor delivered only a small improvement to pictures. But our experience of it in the past has found that it radically boosts the saturations of DLP colours, as well as making the DLP colour palette seem wider and more natural. So here’s hoping that its strengths shine through even on a £1,600 machine.


Other key facts and figures about the D10 find a native resolution of 1,280 x 768 (you didn’t honestly expect full HD DLP at this price, did you?!), and a slightly disappointing claimed contrast ratio of 2,000:1 which kind of reinforces our worries about the projector’s DarkChip2 core.


Heading for the D10’s rear panel uncovers a capable set of connections, including separate DVI and HDMI digital inputs both capable of handling 1080p HD sources. There’s also the expected D-Sub PC port, a 12V trigger jack for kickstarting a motorised screen, plus USB and RS232 jacks for integrating the projector into a full home cinema system.

At this point the D10 starts to feel rather familiar. In fact, closer investigation reveals that it shares precisely the same rear panel layout and configuration as Planar’s PD7010 projector, another DarkChip2 model reviewed a few weeks ago. There’s nothing wrong with this per se; it’s common for many AV products to share a number of OEMed common parts. The only worrying thing in the D10’s case is that the ‘similar’ PD7010 only costs £1,100.


Still, let’s not get too caught up in this. Even if some elements of the D10 are bought in from other places, we have no doubt that SIM2 will have tinkered extensively with everything before launching the product. And the PD7010 we mentioned certainly does not feature a full BrilliantColor system, a fact which some might argue is enough in itself to account for the price difference.


The D10’s onscreen menu system – which also resembles that of the Planar PD7010 – makes handling the projector pretty easy thanks to the way it puts so much information on screen at once without becoming indigestible. It’s also got a fair amount of flexibility in terms of image zoom and keystone correction, making it pretty straightforward to adapt to even an awkward-shaped room.

Finally, when it’s set to work on a selection of our favourite things, one thing becomes apparent about the D10 very quickly: it’s the best DC2 projector we’ve seen, south of two grand.


Predictably, the main reason we can say this so confidently is its colour response. The BrilliantColor system helps it portray colours so vivid and rich that they even outperform those of most sub-£2,500 DarkChip3 projectors, while the wider range of the palette helps it produce traditionally tricky colours such as skin tones with unusual accuracy.


Then there are the D10’s black levels. Playing through the Mines sequence in ”Half Life 2: Episode 2” on the Xbox 360, we were really struck by how surprisingly dark the walls looked, with far less of the low-contrast greyness than we’d frankly expected given the D10’s fairly low 2,000:1 contrast figure. Perhaps SIM2 has merely measured this figure more ‘realistically’ than some of its more fanciful rivals…


HD films such as ”The Prestige” on HD DVD, meanwhile, look impeccably sharp and detailed on the D10. Partly because of an inherent purity and crispness to its presentation, but also partly because it’s unusually good at portraying the sort of subtle details in dark areas that bring dark scenes to life but which commonly elude less accomplished projectors and TVs. 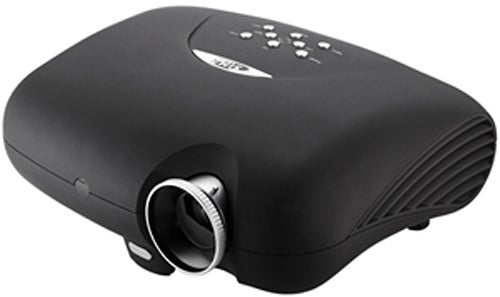 Yet more good news finds the D10’s pictures largely unbothered by DLP’s common issues with fizzing noise over motion and the ‘rainbow effect’ (where pure stripes of colour flit around your peripheral vision). This impressive state of affairs could well be a result (at least in part) of that RGBCYM colour wheel arrangement.


Add to this already heady brew a surprisingly high brightness level for a relatively affordable projector, and voila: the best DarkChip2 projector so far.


Having said so many good things about the SIM2 Domino D10, and acknowledging that it does perform marginally better than Planar’s PD7010 – not to mention InFocus’s DarkChip 2 model, the sub-£1,000 IN76 – we‘re not entirely convinced that it’s as much as £500-£600 better than those striking rivals.


What’s more, aside from its colours, the D10 is also no better and in one or two ways is actually less outstanding than the DarkChip 3 InFocus IN78, even though that model, too, is £100 cheaper.


So in the end, while the D10 does a really SIM2-like job of getting the best from the technology available to it, and is cheap by SIM2’s standards, it’s still not quite cheap enough to see off all of its potential rivals.