Having spent many happy ‘aspirational’ hours in recent times with Sim2 projectors that kicked arse but which would never remotely be within reach of our humble bank accounts, it’s fair to say we’re pretty stoked about the Italian projector maestro’s Crystal 35 model.

For despite boasting the Sim2 name, the Crystal 35 costs just £4,500. Including VAT. And no, we haven’t missed out a zero.

What we’re looking at, in other words, is Sim2’s current ‘lure’ to try and get relatively normal folk engaged with its brand. But what we’re also looking at, presumably, is a compromise – a projector that must have had all sorts of corners cut and features removed to get it down to such a (relatively!) affordable price point. So it will be very interesting indeed to see if Sim2 can retain its competitive edge when stooping so much lower than normal.

Certainly Sim2’s emphasis on design has remained intact with the Crystal 35. For while its basic shape lacks the curvaceous elegance of Sim2’s Lumis range, designer Giorgio Revoldini has nonetheless created a highly stylish affair thanks to the application of a crystal glass finish over its top and front edges; some attractive lines of ‘fins’ down its sides and over a small portion of its front; and an unusual but very fetching backlit circle highlight in the centre of the top panel.

You can also get the projector in two colour options: gloss white, or the gloss black version we tested. Either look great, with your choice likely depending on whether you’re installing one into a dedicated home cinema room – in which case black makes more sense – or using one in a more ‘casual’ or multi-purpose environment, where the white one may suit your decor more.

Usually the idea of using a Sim2 projector in anything other than a serious home cinema installation would be nothing short of criminal. As we’re going to discover, though, the Crystal 35 is anything but a typical projector proposition by the standards of either Sim2 or its rivals at the more affordable end of the market. So much so that a relatively casual application could well be its main raison d’etre.

But we’re getting ahead of ourselves. Going back to the design, the ‘fins’ in the bodywork are designed to offer improved thermal dispersion. And somehow we expect the Crystal 35 is going to need as much help disposing of heat as it can, given that the brightness from its 280W lamp is quoted at 2,500 ANSI Lumens!

This really is an exceptionally high figure for a serious AV projector that doesn’t cost silly money. Sure, there are some very affordable education/business projectors that pump out similarly huge amounts of light, but that’s like saying a tractor’s got as powerful an engine as a Porsche. The point is that the Crystal 35 combines its ‘lamp horsepower’ with a DLP-based optical system that’s been refined to get the most out of video sources. This ‘refinement’ includes Sim2’s ‘Advanced Lamp Technology’, whereby the lamp is controlled by a two-pulse system: one dark pulse to enhance contrast, and one bright pulse to improve brightness.

If you want to put a number on all the Crystal 35’s optical efforts, then how about 30,000:1; a claimed contrast ratio that’s way higher than we’d usually expect to find with such a bright projector at the Crystal 35’s level of the market.

So far we haven’t talked much about the Crystal 35‘s inevitable compromises. So let’s get to the two biggest of these right now. First, the projector doesn’t carry Sim2’s patented and brilliant AlphaPath optical technology. Second and most significantly, it only uses a single-chip DLP system rather than the triple chip DLP or LED engines found in Sim2’s usual high-end projectors.

This inevitably means that the Crystal 35 needs a colour wheel. And wherever there’s a colour wheel, there’s the potential for that DLP problem known as the rainbow effect, where stripes of red, green and blue appear in your peripheral vision or over very bright parts of the picture. Furthermore, experience suggests that the rainbow effect can be emphasised on high brightness projectors, so this is definitely something we’ll have to look out for during our testing of the Crystal 35.

Setting the Crystal 35 up finds it sporting a pleasingly flexible 1.62-2.43:1 throw ratio, along with manual optical vertical image shifting. There’s a degree of gamma and colour management at your disposal too, including range and saturation adjustments for the RGBCMY colour elements.There’s nothing like the flexibility that you get with the Live Colours software system supported by Sim2’s premium projectors, though.

It’s also worth stating that some of the Crystal 35’s presets are rather unhelpful by Sim2’s usually exacting standards, making a little time tinkering with the available settings in one of the three provided ‘User’ preset memory slots well worth your while.

Thankfully it’s possible to end up with some very good looking colours indeed, which combine natural tones with exceptional blend subtlety for a £4.5k projector. Even better, the predominantly natural look to colours is combined with levels of vibrancy that are nothing short of spectacular for the sub-£5k market. This is, of course, a direct result of the way the Crystal 35‘s massive brightness levels combine with what’s clearly a very impressive contrast range.

Black levels get much deeper than they’ve any right to on a projector with so much light at its disposal – yet the brightness ensures that there’s never any shortage of shadow detail during even the darkest scenes.

It was at this point that we realised we were actually only using the lamp in its eco mode. Which meant that the already stunningly punchy images we were looking at could be made even more dynamic. This was probably the closest we’ve come to a real life ‘but this one goes to 11’ moment, and actually left us with a picture that felt a little overpowering.

Switching back to Eco, we were also able to wallow in the phenomenal amount of detail the Crystal 35 managed to resolve from a selection of Blu-rays – all delivered without a hint of noise beyond any grain that might be in a transfer (so long as you don’t activate the noise-inducing BrilliantColour option, which has to rate as just about the most unnecessary feature we can remember seeing on any product in recent times given how vibrant the Crystal 35‘s images are in their ‘natural’ state).

There are obviously some seriously impressive projectors around right now that cost less than the Crystal 35. JVC’s X3, in particular, delivers not only outstanding video quality but also decent 3D playback for just £3,500. However, with a brightness output that’s not even half that of the Crystal 35, the JVC only works effectively in an extremely dark environment of the sort usually only achievable in a dedicated home cinema room.

The extreme brightness of the Crystal 35’s images, by comparison, actually makes it a unique proposition for its price point in that it allows you to watch and truly enjoy its pictures with ambient light in your room. In fact, couple the Crystal 35 with one of the Screen Innovations’ Black Diamond, focussed-reflection screens, and you’ve potentially got yourself a 100-200in ‘TV’ without needing to cough up anywhere near the 50 grand minimum required to buy an actual 100in TV.

In fact, this scenario could well be Sim2’s main thinking behind the Crystal 35. Tellingly, according to designer Giorgio Revoldini ‘Crystal lives in the home decor, free of unnecessary formalities. Only when it is turned on, when the lens and graphics are illuminated, does it unveil its true nature’. Decipher this classic ‘designer speak’ and Revoldini’s words suggest that the Crystal is meant to be something you live with as part of your day to day life, in your normal living spaces, rather than something that’s expected to be tucked away in a dedicated, blacked out room. 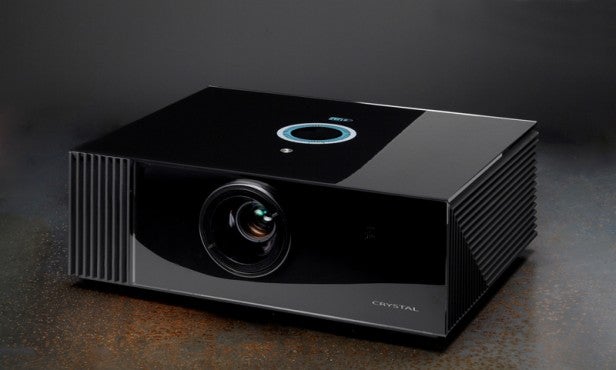 While we have a feeling the unique properties of the Crystal 35 will appeal to a good many home cinema enthusiasts, though, before you all start trying to scrape together £4,500, we do have to add a word of caution. Or rather, two words of caution: rainbow effect. For as feared, the Crystal 35’s combination of extreme brightness – even in Eco lamp mode – and a single chip DLP system does generate pretty clear evidence of colour striping, especially during dark scenes.

The impact of this reduces if you’re watching in ambient light. But the fact remains that if you happen to be one of those people who’s badly affected by rainbowing (its impact varies from person to person), then the Crystal 35 is not for you.

The Crystal 35’s extreme brightness also causes another couple of less troubling issues, as it kicks out more heat than most projectors and also runs a touch noisily. The noise is very even, though, and the projector’s throw-distance flexibility should enable you to position the projector a suitable distance away from your seating position.

The Crystal 35 is the only projector we’ve tested costing less than five figures that’s been able to produce pictures of real cinematic quality in ambient light. Especially if used with a high-contrast, focussed-reflection screen like the Black Diamond. This gives it a unique, ‘lifestyle’ SP that amply justifies its £4.5k price.

It’s also a ferociously potent projector for a dedicated home cinema room, of course. However, if you’re thinking of buying one for such a dark space – and perhaps even if you’re thinking of getting one for a lighter, more casual environment – we really do recommend that you try and give the Crystal 35 a spin in a friendly dealer’s demo room before you hand over your cash, just in case you find the rainbow issues too overpowering.