If you’re thinking of building a new PC it’s worth giving some thought as to what case you’re going to be putting your components into. The first thing to consider are it’s aesthetics as the thing will most likely be on show for much of the time so you don’t want to go for something that’s going to turn your stomach. Then you’ll need one that will have enough room for expansion and one that’s not too difficult to work with. But then you have to take the cost into account. If you’re not prepared to put much of your PC building budget towards your system then look away now – this SilverStone case will set you back £100. You can get it for £10 less if you forgo the front panel LCD display but it seems churlish to pass on a neat little feature. You can also get the case with a windows panel but Scan is asking a full £40 more for that, which seems well over the odds to me.

We’ve looked at a couple of SilverStone cases before and generally have been impressed by them and judging from first impressions of the TJ05 that’s not going to change. The TJ05 is a large case and quite heavy at 13.45Kg. At 504mm it’s also quite tall and extremely deep at 617mm – that’s a whole lot of case. With that in mind SilverStone the feet at the bottom can be splayed ensuring stability. No PSU is provided but anyone interested in a case like this will want to pick and choose they’re own high-quality unit.


The front is solid aluminium and the whole thing is set off nicely by the blue LCD screen. The top half of the fascia curves inwards and acts as a flap that covers the four external 5.12in bays and the two 3.5in bays. This cover is held in place by a clip and pops open when you push it in. The bottom half features a central post with the silver power and reset switches and two power and hard disk activity lights. On either side of this central section are four air vents used by the front intake fan. This whole front section is hinged and is held in place by a lock with two small keys provided. Once this is open you can get access to the front drive bays. To the right of the bottom half are four USB sockets, one full size FireWire 400 port and microphone and headphone sockets. 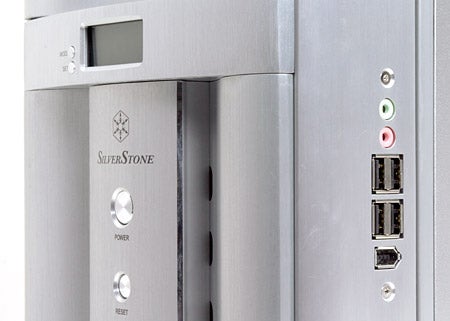 Somewhat inconsistently SilverStone has gone for a tool-less design in some areas but not others. The covers for the 3.5in and 5.25in bays are held in place by screws but the drives themselves are held in place without screws. Instead rails are provided and these are stored in the base of the interior so they’re always to hand. It’s a neat solution but in practice it was extremely difficult to get the optical drives in due to the tightness of the fitting. Best avoid building the PC then with children around – swearing is likely to occur. The internal 3.5in area for hard disk is better with space for five hard disk drives. To facilitate disk installation the whole cage can be removed. This is down easily by turning a thumbscrew at the bottom and pressing down on a flap at the top. 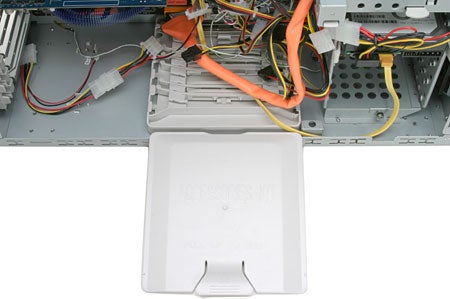 The front intake 120mm fan is located behind a dust cover and is located right in front of the hard disk bay, which is a good thing, especially if its you’ve got more than one drive installed. In addition there’s a mount for an 80mm fan by the hard disk cage on the side of the back panel, ideal for drawing the hot air away from the disks after the front fan has brought it in. As well as being good news for the hard disks this also has the benefit that the motherboard and components won’t be as affected by air warmed by the hard disks.


The tool-less approach even extends to the holders for the expansion cards. There’s no thumb screws here – oh no, it’s plastic sliders that you press down to hold the card in place. It works well and it’s handy not to have to put screws back in place, but it proved to be a tricky business every time I needed to get a graphics card in and out. 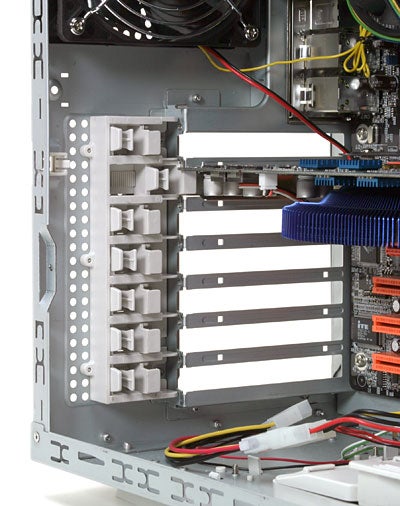 SilverStone also provides a panel that sits inside the side door and is designed to keep your PCI cards in place and acts as a bracket for two 80mm fans. This is overkill for my system, and I simply didn’t use it, but if you’re building a full-on SLI system, this is just what you want, though inevitably you’ll be increasing the noise level.


The side panel itself has vent holes to enable the air to be circulate. Two thumbscrews hold it I place while the half-oval shapes at the rear of the locking mechanism – apart for the open position and together or locked.

The main problem that I encountered when building the system was the sheer mass of cabling inside. SilverStone does provide a clip at the back panel, which enables you to keep most of them out of the way but as you’ll see from my pictures I couldn’t keep things tidy internally, though those more skilled might have better luck. Two of the cables you’ll have running across the motherboard are for the side mounted USB and FireWire ports. 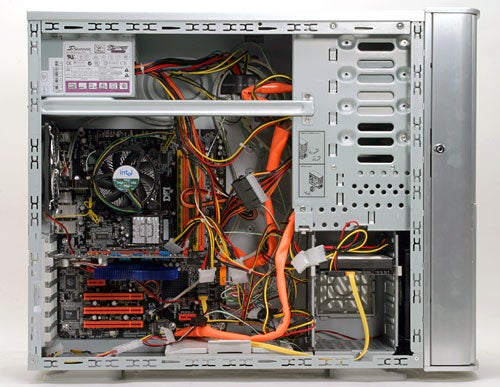 What bothers me is that each of these require you to attach multiple small connectors next to each other in a very small space, while having to interpret the labelling with differences between the labelling on the cables on the case and the labelling on the motherboard pins. Every time I have to build a PC I find this part of the process teeth grindingly irritating. Couldn’t case manufacturers and motherboard manufacturers get together and come up with a unified standard for this to make it a single plug so we can save time and stress? Thank you people, that would be nice. 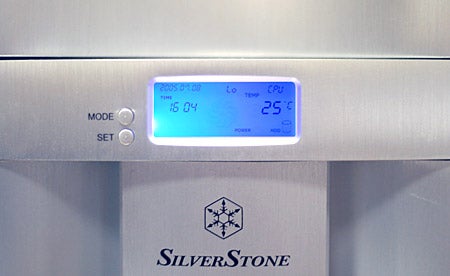 As for the front LCD panel, it adds to the look with its blue backlight. Viewing from an angle you can see every readout so for an accurate reading you have to look at it from head-on. Thermistor temperature sensors are provided and are labelled for CPU, HDD and SYS and these cables have to be placed by the relevant components for the readings, displaying in Celsius, to mean anything. It’s not perfectly scientific but it will give you a better idea of what’s going on inside your case. The display also displays the time and date. The unit has its own battery set behind it and beeps when you power on the PC. An alarm can be set to beep at a given temperature for each sensor.


The SilverStone TC05 is an impressive case for those looking to build a powerful PC or workstation. It large hard disk cage will accommodate five drives making it a good option for video editing or RAID setups. Where it really excels its cooling options and while there are two 120mm fans included at front and rear there’s also space for a further three 800mm fans. With the side mounted vents it will also appeal to those looking to build a high-end gaming system. The only negatives are a lack of finesse in fitting the optical drives but this shouldn’t be too much of a problem for the type of person who will go for a case like this.