Every time I review a Sigma camera I find myself repeating the same explanation of its unusual Foveon X3 sensor technology. I’m sure regular visitors to TrustedReviews are getting a bit tired of reading it, so this time I’d first like to point you to this article that explains more about it. Anyone who’s not familiar with the Foveon sensor should go and read that now. Don’t worry about the rest of us, we’ll wait here for you. 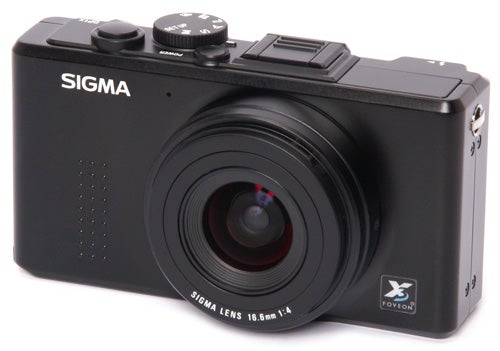 
Both cameras feature the same sensor, and it’s the same 4.6 megapixel 20.7 x 13.8mm Foveon X3 chip that has appeared in every Sigma camera since the original DP1 and the SD14 DSLR were introduced in 2006. Sigma has announced a new DSLR, the SD1, to be launched in 2011, which will feature a new higher resolution 15MP Foveon chip, but until then Sigma seems determined to squeeze every last bit of mileage out of its existing technology. 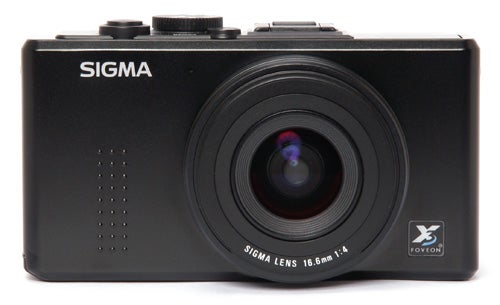 The DP1x is technically an advanced compact, since it has a full range of manual exposure controls, a flash hot-shoe and can shoot in Raw mode, but when you compare its specification and features to those of its rivals in that category, such as the Canon PowerShot S95 £315), the Panasonic LX5 (£330), the Canon G12 (£370), the Samsung EX1 (£380, review next week) and even the Nikon P7000 (£440), it looks rather primitive and massively over-priced. The DP1x is currently on sale at an almost unbelievable £600, give or take a penny. For the same money you could buy a good entry-level DSLR with a couple of lenses and still have enough left over for a spare battery and a memory card.

As with previous Sigma compact cameras the overall build quality is quite good, although there is room for improvement. The DP1x has an all-metal body and does feel quite sturdy, but there are some pretty big gaps between some of the body panels and the controls feel surprisingly cheap for such an expensive camera, and the battery/card hatch has no latch and can slide open quite easily. The body is very flat and box-like, with only small textured areas on the front and back to provide any grip, and despite the camera’s large physical dimensions the handling leaves a lot to be desired. 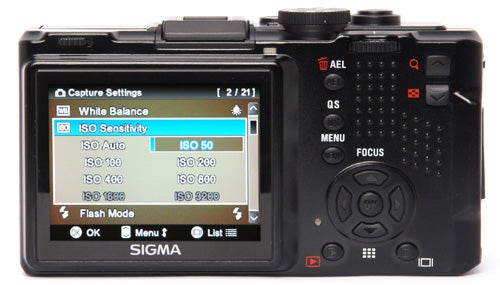 The DP1x has a relatively small 2.5-inch LCD monitor with a resolution of 23k dots. The refresh rate is a bit slow, it’s not terribly bright and the reflective surface makes it difficult to see in bright daylight, but it does at least offer a nice wide angle of view.


In terms of features the DP1x is, unsurprisingly, identical to the DP2s. It has the common manual exposure controls, including program auto, aperture and shutter priority, and full manual exposure. Shutter speeds from 15 seconds to 1/200th of a second and aperture settings from f/4 to f/11 are available in the usual 1/3EV increments, and ISO settings range from 50 to 800 ISO. Exposure settings are adjusted, somewhat counter-intuitively, by the left and right buttons on the D-pad and by the two buttons on the top right of the rear panel that look like zoom controls. There is a data entry wheel, but it is only used to adjust manual focus. Compared to its main market rivals the control interface seems clunky and primitive.


Other camera adjustments are made via a basic quick menu system, including white balance, ISO setting, drive mode, metering mode, a small range of colour options, and image size and quality settings. There is also a main menu that redundantly duplicates all of these settings, as well as adding a few more, such as adjustable contrast, saturation and sharpness. The simple three-colour menu with its blocky, poorly aliased text looks crude compared to the slick gradient-filled menus of rival cameras. 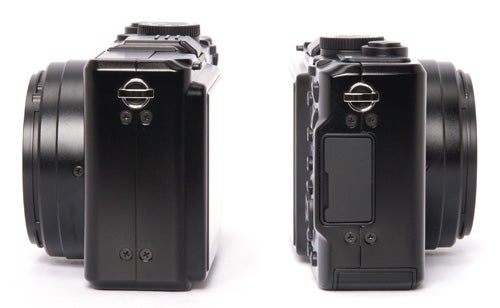 While keen photographers prefer the creative control afforded by manual settings, it’s always good to have some automatic options to fall back on. Even advanced compacts such as the Canon S95 and Panasonic LX5 offer features such as automatic scene scene recognition, face detection and subject tracking AF, and scene mode settings for most common situations. The DP1x has none of these features, and in fact barely has any features at all. When many of its much cheaper rivals are equipped with full 1080p HD video recording with stereo sound, the DP1x can only offer 320 x 240 pixel video resolution with mono audio. Most cellphones can do better than that.

Like the DP2s, the DP1x is supposed to have a new faster processor, but there’s little sign of it in the camera’s performance. It takes nearly six seconds to start up and take a picture, and in single-shot mode and JPEG Fine quality the shot-to-shot time is approximate 2.6 seconds, about the same as the DP2s. Shooting in Raw mode it is slower still, taking progressively longer each shot as it waits to empty the buffer. In continuous shooting mode it can fire a burst of four shots (three in Raw mode) in just under two seconds, but then has to wait for over eight seconds for the buffer to empty before it can shoot again. 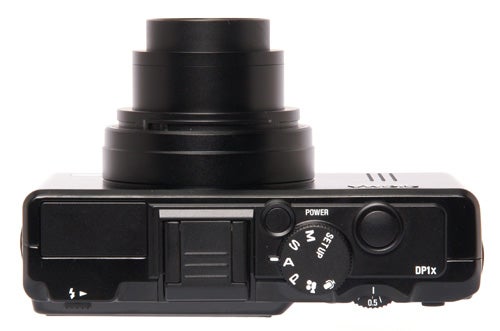 The DP1x has the same autofocus system as the DP2s, with the same set of problems. It’s not particularly fast for a premium camera, and its low-light performance is terrible, failing to focus in light you could read by. There is no AF assist light, so low light shooting has to rely on manual focus, but with such a small monitor and no view magnification this is virtually unusable.


If you read the article linked at the start of this review you’ll know that the Foveon X3 sensor has three photoreceptors at each pixel-point on the sensor. Because of this Sigma insists on referring to it as a 14-megapixel sensor, but this is rather disingenuous. The final image size is only 2652 x 1768, or 4.7 megapixels. Sigma’s big claim about the Foveon sensor is that it produces better colour depth and sharper detail than an equivalent conventional Bayer-mask sensor. This is certainly be true; there’s no question that it produces vastly superior image quality to a conventional five megapixel sensor. Unfortunately nobody makes five megapixel sensors any more, and haven’t since about 2005, about the time that the sensor in the DP1x was developed. If you compare the DP1x to a modern 12 or 14 megapixel compact, or even to the 10MP 1/1.7-inch sensors used in most other advanced compacts, the Foveon sensor’s image quality advantages are simply no match for more up-to-date technology. Looking at the sample images from the DP1x it’s easy to be impressed by the sharp detail and excellent colour depth on a computer monitor, but if you want to print them out at 300dpi photo quality they’re only big enough for an A5 print. 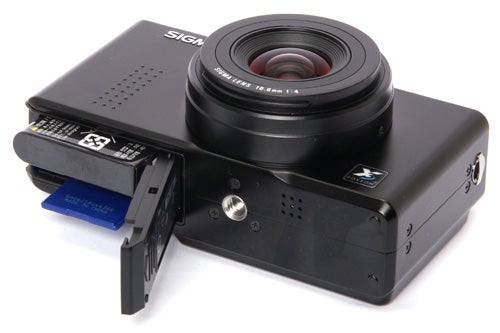 The lack of resolution isn’t the only image quality problem. White balance is very inconsistent, varying in consecutive shots under identical lighting conditions, and image noise is also a problem at all sensitivity settings above 100 ISO, with visible banding on shots at 800 ISO. Dynamic range is also quite limited, especially under strong backlighting.

The DP1x is Sigma’s attempt to squeeze the last bit of mileage out of a five-year-old sensor design. While it can certainly take a very good picture under the right circumstances, it is beaten soundly on features, performance, handling and image quality by cameras costing half as much.

”Here is a series of shots taken at different ISO settings, to guage the camera’s noise levels. These shots were taken indoors using high-intensity tungsten lighting.” 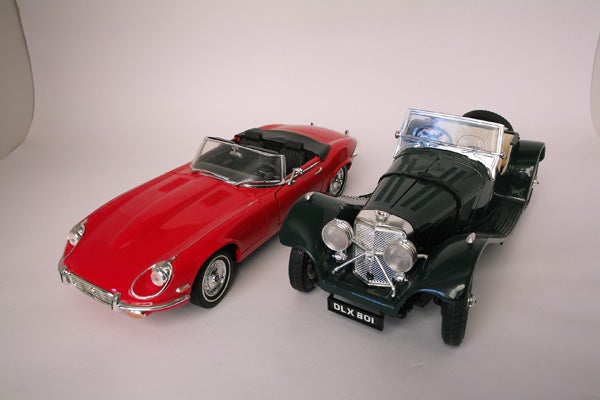 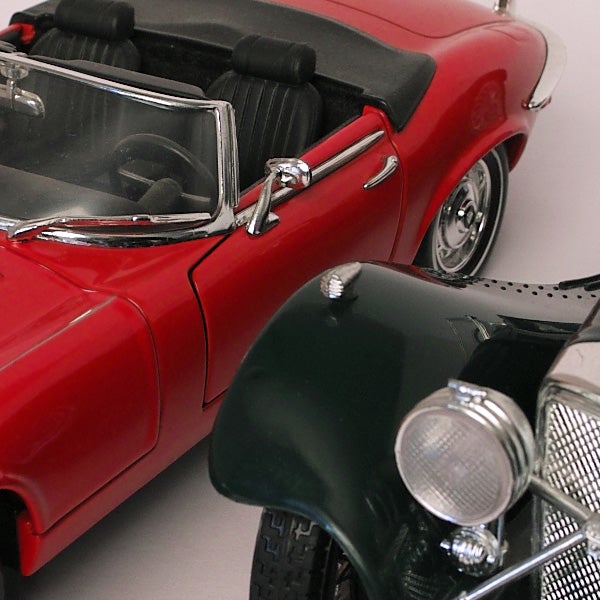 At 50 ISO the image quality is very good, with nice smooth colours, although there are some jagged edges. 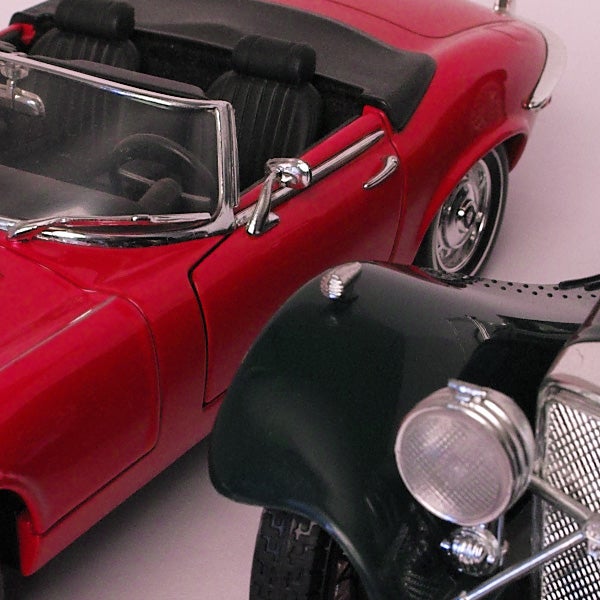 At 100 ISO the white balance has done something peculiar, despite being on the same setting as the previous shot. 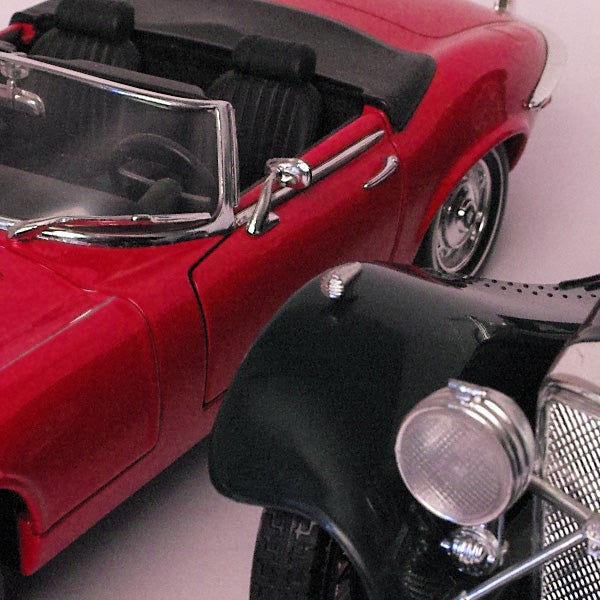 200 ISO and noise is clearly visible. 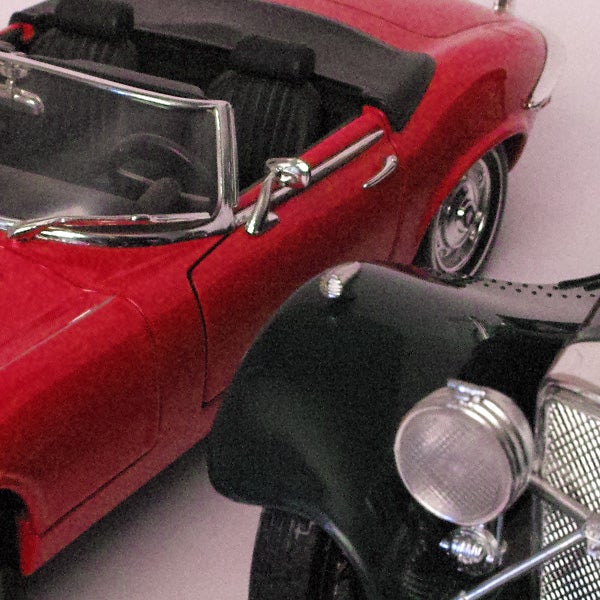 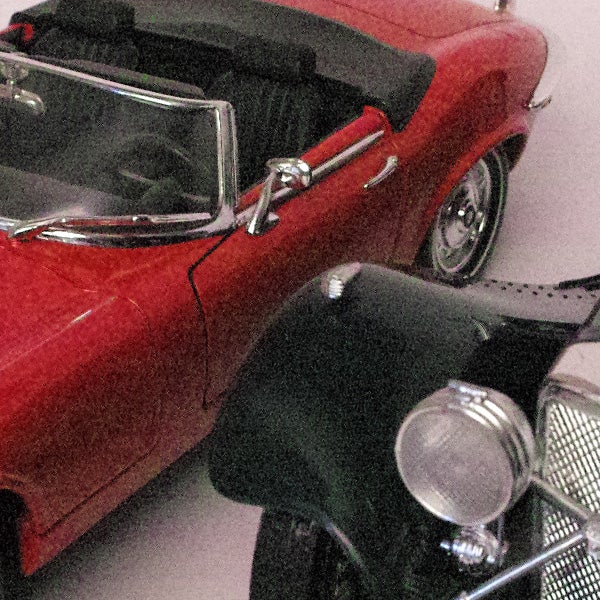 At the maximum 800 ISO setting the noise is very bad. 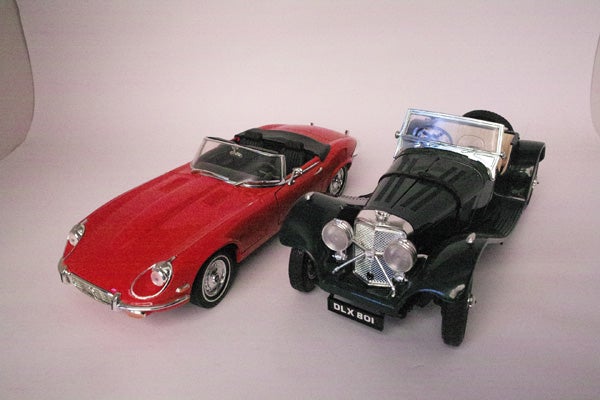 ”Here are some more sample shots from this camera. Some may be clicked to download the full-resolution originals.”


The 28mm fixed-length lens of the DP1x was too wide for my usual detail shot, so here’s a different one. 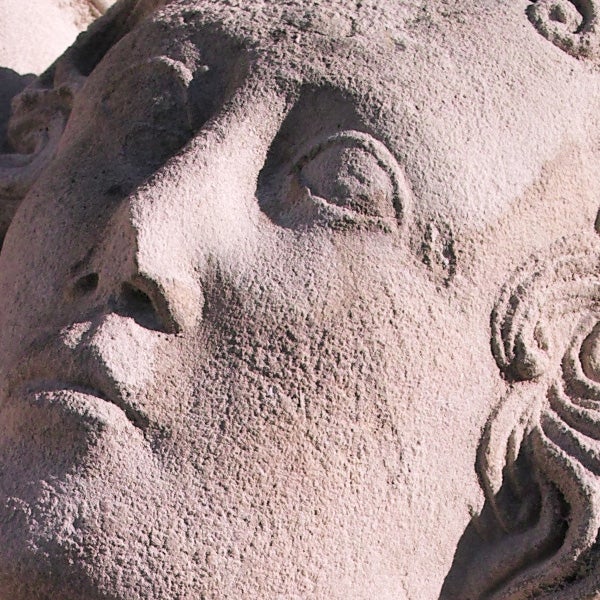 As you can see the Foveon sensor does capture a lot of detail, but the image size is relatively small.

”Here are some more sample shots from this camera. Some may be clicked to download the full-resolution originals.” 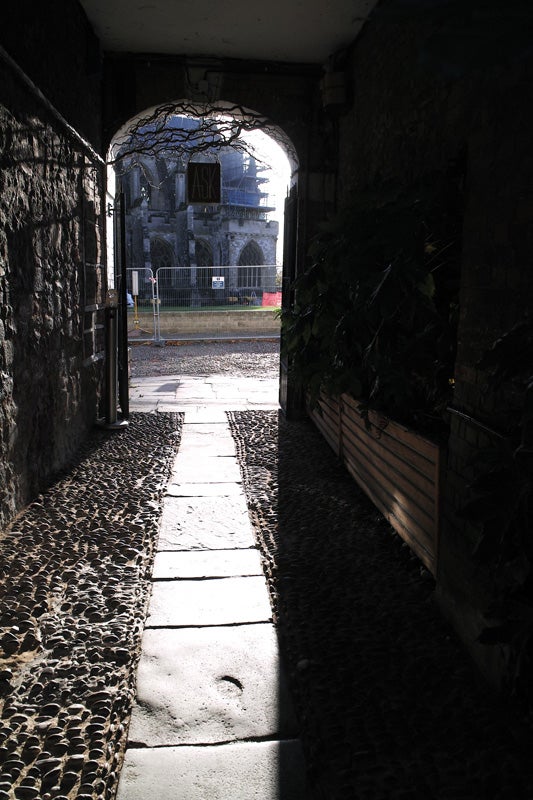 Dynamic range is surprisingly poor for a large-sensor camera.


Colour rendition is one of the DP1x’s few real strengths.