After years in the wilderness, the classic 50mm lens is experiencing something of a comeback, thanks in part to compact system cameras giving these once-unloved lenses a new lease of life. Used on a camera with an APS-C sensor, a 50mm lens becomes a 75mm equivalent that’s great for portraiture. On cameras with full-frame sensors, and for videographers, they have become a cheap way of obtaining a shallow depth of field for low-light shooting or portraiture.

This rise in popularity has led most manufacturers to revisit their 50mm (and 50mm-equivalent) lenses and give them updates that include modern lens coatings and improved performance. However, Sigma’s latest 30mm f/1.4 DC DN | C lens is an entirely new optic purpose-designed for mirrorless cameras, which comes in both Sony E and Micro Four Thirds mounts. Used on an MFT camera, it has a 60mm equivalent field of view, while it comes in at around 45mm equivalent when used on a Sony E-mount camera with an APS-C-sized sensor.

Without having to create an image circle large enough to cover a 35mm full-frame sensor, the Sigma 30mm is relatively small and light, especially when you consider that it has an f/1.4 aperture. However, it’s physically somewhat long. Optically, the lens is constructed of nine elements in seven groups, with the two rear elements being aspherical. These should help provide edge-to-edge sharpness, as well as keep chromatic aberrations to a minimum, if they are visible at all. To reduce flare and ghosting, the lens features Sigma’s Super Multi-Layer coating. 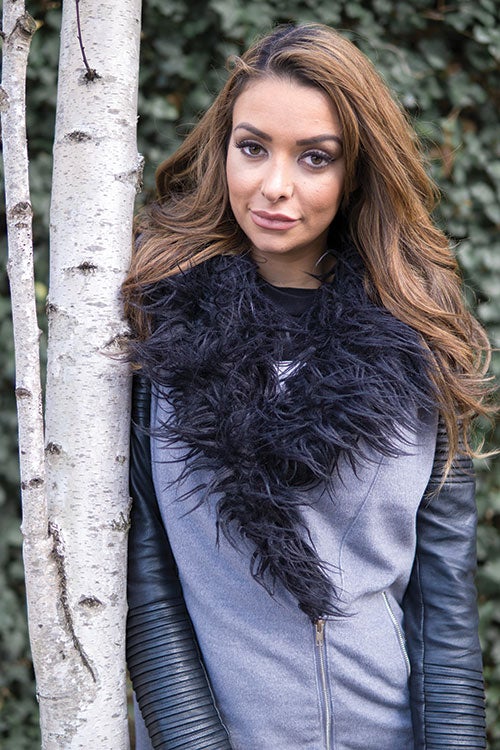 The 30mm is a good lens for mid-length portraits

There obviously isn’t much point in an f/1.4 aperture if you have horrible hexagonal bokeh, so sensibly Sigma has employed nine rounded aperture blades to ensure that when the lens is stopped down to f/1.8 and beyond, the out-of-focus areas show nice circular specular highlights and smooth transitions.

The lens is completely electronically controlled. There is no aperture ring and the focus ring is a fly-by-wire electronic affair. To make focusing fast and smooth, the lens employs a stepping motor that is both quick and quiet. Sigma promotes this as being especially useful when shooting video. Added to this, the AF system is fully compatible with Sony’s Fast Hybrid AF system.

The body of the lens itself feels cold to touch, and appears to be largely made of metal. However, Sigma states that some parts of the barrel, and the lens aperture, are made of Thermo Stable Composite (TSC). This material is ‘highly elastic’ and ‘exhibits minimal deformation’, according to the information in the manufacturer’s press material. The result is that these parts should cope better with wear and tear, and be less prone to the small gaps and shifts over time that can be caused by fluctuations in temperature.

The only other point to note about the construction of the lens is the brass mount that has been coated for extra durability. Rather usefully, Sigma will actually swap lens mounts over, so if you switch from Micro Four Thirds to Sony E mount, or vice versa, you can send the lens to Sigma, and the company will swap the mount. Based on its prices for mirrorless cameras, the conversion should cost around £85, which is far cheaper than buying a new lens. 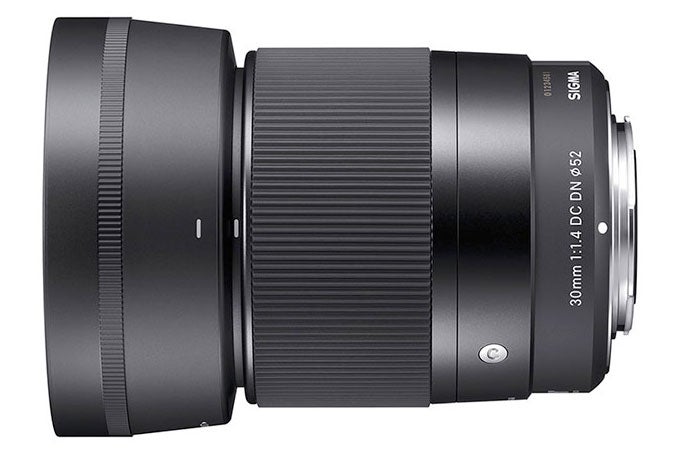 Externally, the lens is nothing to write home about. It has the clean black aesthetic that we have come to expect from Sigma, ever since the company announced its Global Vision direction around four years ago. Besides the lens designation and reminder that it has a 30cm minimum focus distance, the only other marking of note on the lens is the silver ‘C’, which denotes is as being part of Sigma’s Contemporary range. As a reminder, the Contemporary range is designed to offer ‘High performance, yet [be] compact and lightweight’, whereas the Art lenses focus more on image quality.

We tested the lens with a few cameras, including a Sony Alpha 6000, the new Alpha 6300 and an Alpha 7R in its APS-C crop mode, and it felt nicely balanced on each. It is fairly large for the focal length. Most of the other lenses I mentioned previously are smaller, almost pancake, but then they don’t have an f/1.4 aperture, which obviously requires larger elements.

The lens measures 64.8×73.3mm and weighs 265g, which certainly isn’t going to inhibit your ability to carry it around with you all day. It has a 52mm filter thread, and usefully, the lens employs internal focusing, so should you use an ND grad or polarising filter with it, you will not have to worry about the front turning or extending when focusing.

The large ribbed focusing ring on the lens barrel is impossible to miss and is easy to find with your eye held to the viewfinder. I had no problem with manually focusing this lens, and I was able to get very accurate focus when using the magnified view offered by the Sony cameras. Even very slight nudges of the electronic focus ring were rewarded with precise shifts in focus. Highly responsive, a slow turn of the ring will shift the focus slightly, whereas a sharp shift could see you jump from a metre to infinity.

Overall, the lens was quick to focus. On the Alpha 6300 it seems slightly slower than Sony’s own lenses, but it was by no means sluggish. As Sigma claims, the motor itself is very quiet. You have to hold your ear to the lens to hear any slight whirring noise. However, there is an audible click or clunk as the lens engages focus. Again, the sound isn’t particularly loud, but if silent photography is your thing, or you plan to use AF while shooting video, then you may want to take note. The rest of us needn’t worry.

It should be noted that the lens isn’t optically stabilised, so care needs to be taken when handholding at slower shutter speeds. If you have sensor-based stabilisation on your camera, remember to switch it on. Otherwise, the rule for handholding at the closest shutter speed to the equivalent focal length applies, so don’t expect to get sharp results at speeds much slower than 1/50sec. If you have a camera with built-in image stabilisation, you’ll obviously be able to take this into account. 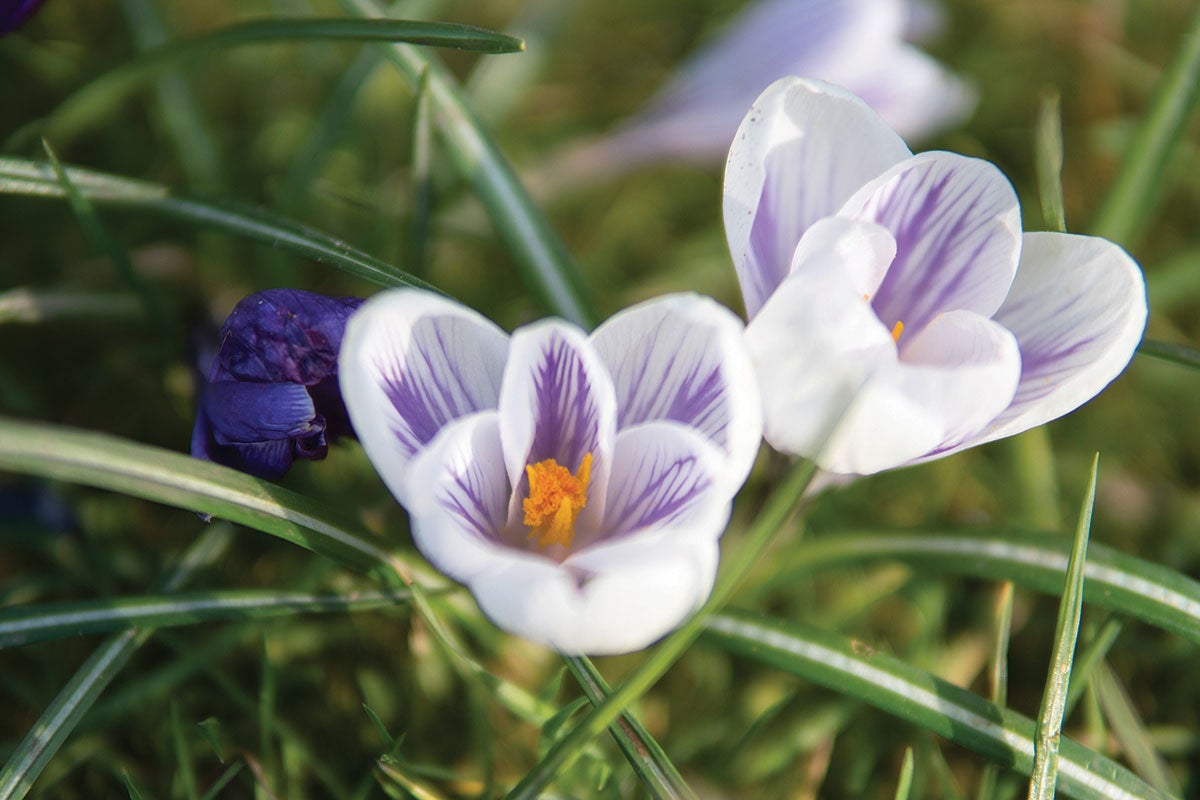 Any lens with a large aperture is begging to be used wide open. Indeed, while I was interested in seeing how the lens performed at f/5.6-f/11, the larger apertures proved to be the most interesting.

Needless to say, the key is to get the focus absolutely spot on. An f/1.4 lens can be very unforgiving; with such a shallow depth of field, the slightest shift in focus can make a huge difference. The good news with the Sigma 30mm f/1.4 is that, when you get the focusing right, you are rewarded with fantastic sharpness. Our real-life images shot with the Sony Alpha 6300 looked as sharp in the centre as they would with a proprietary 50mm f/1.4 DSLR lens. It really is excellent.

Stop it down to around f/4 and it’s even sharper, with very fine details wonderfully reproduced. At f/8 in our real-world tests the images look just as sharp, although our tests show a slight drop in sharpness.

The optical coatings of the 30mm f/1.4 work well, and even when shooting backlit images there were no signs of lens flare. Backgrounds are rendered nicely, with pleasing circular specular highlight and smooth gradations between out-of-focus areas. For full-length and mid-length portraits, the lens does a good job of separating the subject from the background, although I found facial features were slightly distorted when shooting head-and-shoulders shots. 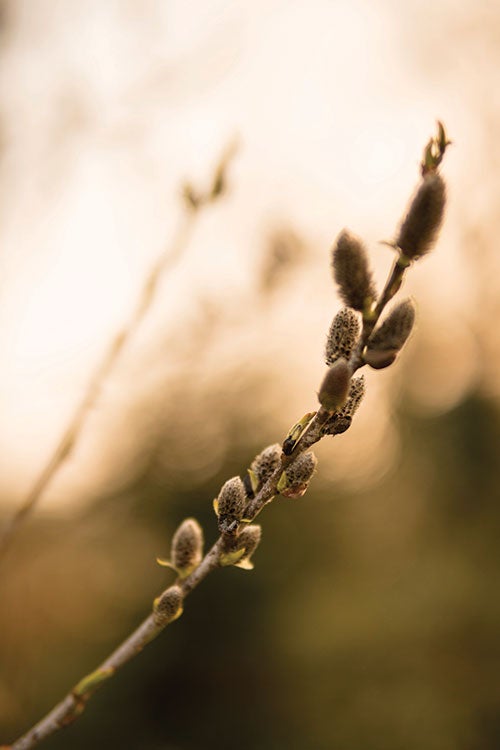 There is some slight chromatic aberration on high-contrast edges, but it is very faint and easily removed

There is a slight hint in some of our raw images of chromatic aberration. However, the colour fringing is very thin and not particularly noticeable unless viewed at 100%. Once again, it shouldn’t prove problematic in most situations, and I found it was easily removed after a quick play with the sliders in Camera Raw. 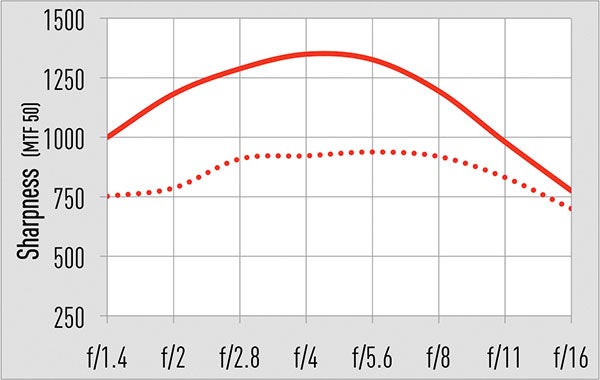 The MTF graphs from our Applied Imaging tests show that the 30mm f/1.4 behaves very well indeed, despite its relatively low price. It’s very sharp in the centre, with peak resolution around f/4-f/5.6. The corners aren’t quite so sharp, but this is partially due to slight curvature of field throwing them a little out of focus with our flat test chart. Overall, though, this is an excellent performance. 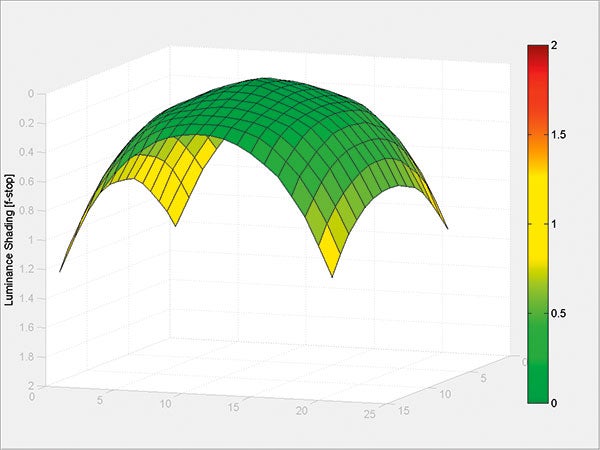 Shooting at f/1.4 gives noticeable shading on Sony APS-C cameras, with the corners being about 1.2 stops darker than the centre of the frame. But stopping down to f/2.8 essentially eliminates this vignetting entirely. Micro Four Thirds users will also see less vignetting, due to the smaller size of the image sensor. 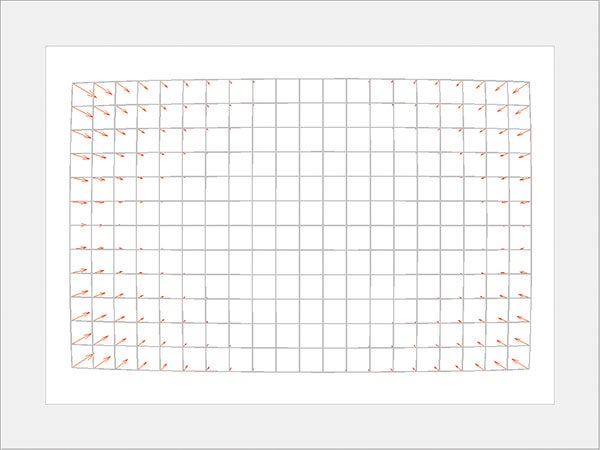 As is the way with modern lens design, the 30mm f/1.4 shows visible barrel distortion when looking at uncorrected raw files. Sigma advises Sony users to set distortion correction to Auto, which should fix this in the camera’s JPEGs. Micro Four Thirds cameras will always correct this automatically. 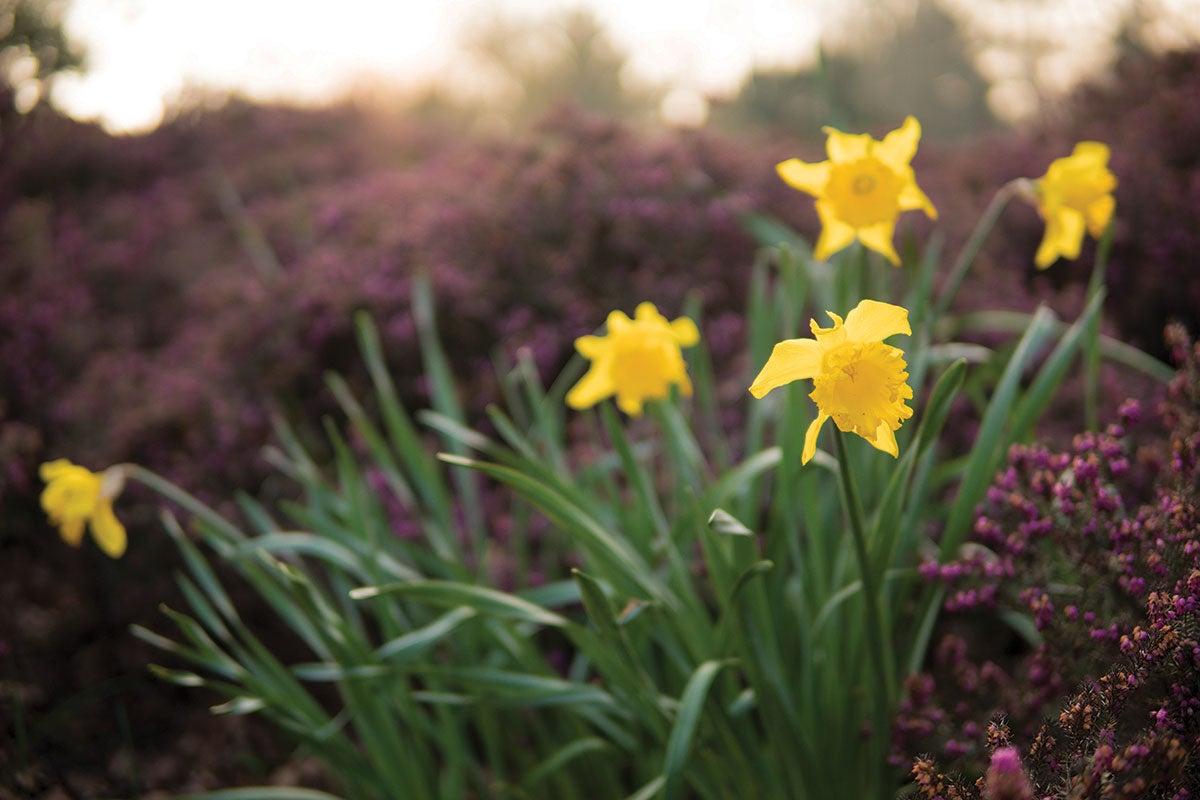 In this backlit shot, the lens produces no flare

Reasonable size and weight, excellent image quality, large f/1.4 aperture, superior build quality and a good price all mean that the Sigma 30mm f/1.4 DC DN | C lens is worthy of the consideration of Sony E-mount users. The 50mm-equivalent lens is versatile, and a step up from existing Sony options at this focal length. Micro Four Thirds users have a great deal more choice within this focal length. Having said that, the f/1.4 aperture can only be matched by the more expensive Leica 25mm f/1.4 Summilux, and given the performance of the Sigma lens, it would be difficult to justify the extra money.

With a retail price of around £300, it is hard to really fault this lens. Sharp images at f/1.4 and edge-to-edge sharpness when the lens is stopped down make this lens very appealing and a useful addition to your collection. If you have a Sony APS-C E-mount camera, you should certainly consider it. If you are a Micro Four Thirds user, it should be at the top of your ‘lenses to consider’ list.