When it comes to DSLR image quality, pretty much all of us have heard the old truism about the quality of the lens being more important than the price of the camera. In this respect it pays to get off to the best possible start when buying your first DSLR, or when taking your first steps towards building a lens collection. 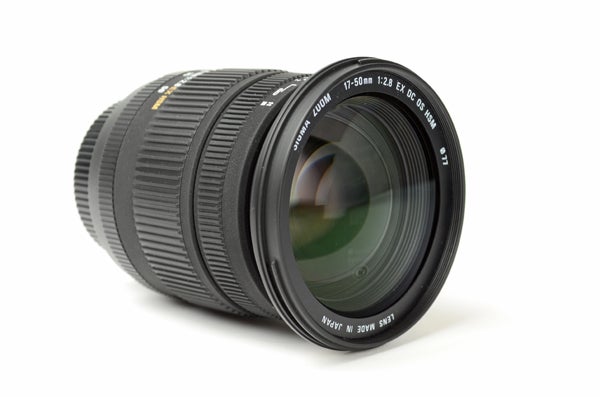 Thing is, good lenses like Sigma 17-50mm f/2.8 EX DC OS HSM cost money, and when purchasing a DSLR most people are much more likely to spend as much as they can on the camera and settle for a cheap kit lens, more often than not with a focal range of between 18-55mm; a so-called ‘standard zoom’. This is wide enough to shoot landscapes and groups of people, while also having enough reach to cater for individual portraits and to isolate nearby subjects from their surroundings.

While there’s no denying the flexibility a standard zoom offers, many kit lenses tend to be a bit flimsy and plasticky. In addition they usually offer a maximum aperture that starts at f/3.5 at 18mm, progressively stopping down to f/5.6 by the time you reach 50mm or 55mm.

The Sigma 17-50mm f/2.8 EX DC OS HSM lens (herein referred to as the ‘Sigma 17-50mm’), by contrast, takes things up several notches in all areas, from general build quality to performance. Specifically designed for use with DSLRs fitted with an APS-C sensor, it’s a much larger and more solid optic than your standard kit zoom. 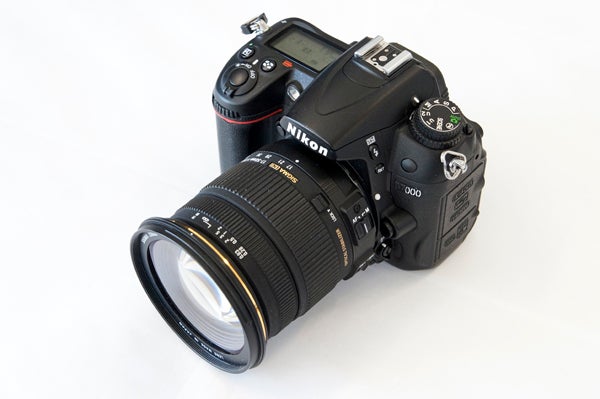 Just as importantly (if not more so) it also offers a fast f/2.8 aperture throughout its focal range. Not only will this allow you to shoot at higher shutter speeds in poor light, it can also be used creatively to create a shallow depth of field that keeps your main subject sharp while throwing the background out of focus. Judged purely on its merits as a creative tool, a standard zoom with a constant f/2.8 like this is extremely useful.

In this respect the Sigma 17-50mm we have on test here represents a significant upgrade over your standard kit lens. But at around £550 it’s not cheap. Sure, you can probably recoup around £100 if you were to buy your DSLR as a body-only option rather than going for the kit lens package. But is the Sigma 17-50mm worth this extra investment? And does it merit a closer look at full price if you already own a kit lens of a similar focal range? Let’s take a closer look at what it delivers for the extra outlay.

Available for Sigma, Canon, Nikon, Sony and Pentax DSLR mounts, the Sigma 17-50mm is a fairly substantial lens that weighs in at 569 grams without any lens caps attached. The ‘EX’ abbreviation in its full name means it belongs to Sigma’s range of professional-grade lenses. As such it gets the signature gold band and gold lettering common to all lenses with the EX denomination, along with a classy matt finish on the lens barrel. Picking it up for the first time, it undoubtedly feels like a quality optic. 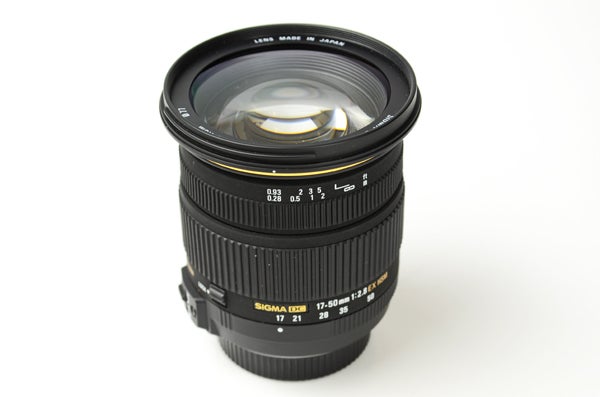 While the outer casing, lens barrel, zoom and focus rings are all constructed from plastic, it’s toughened and feels solid enough to withstand a few gentle knocks and scrapes. You wouldn’t want to knock it with any great force though, and you certainly wouldn’t want to drop it either. If you don’t have a compartment in your camera bag that it’ll fit snugly into, Sigma supplies a padded case to keep it safe when not in use. There’s even a locking switch on the lens barrel that can be used to stop the lens from extending beyond 17mm when in storage. It isn’t weather-sealed though, so you’ll need to keep it away from direct contact with water, sand and dirt.

Measuring 87mm at its most compact the lens extends to 113mm when fully extended. Compared to a standard 18-55mm kit zoom this might seem rather large, but measured against other professional-grade lenses of this kind, it’s very much par for the course. Internally, the lens is constructed from 17 Elements in 13 Groups, including two “F” Low Dispersion (FLD) glass elements to keep fringing on high-contrast borders to a minimum while boosting contrast and definition.

The front element doesn’t rotate, so attaching circular polarisers and other alignment-sensitive filters such as circular ND Grads isn’t a problem. It’s generally considered good practice to attach a UV filter to the front of a lens, not just to block out haze but also to protect the front element of your valuable new investment should you have an accident. While these generally aren’t all that expensive, the Sigma 17-50mm’s relatively large 72mm lens thread diameter does mean that additional filters (polarisers especially) will cost substantially more. 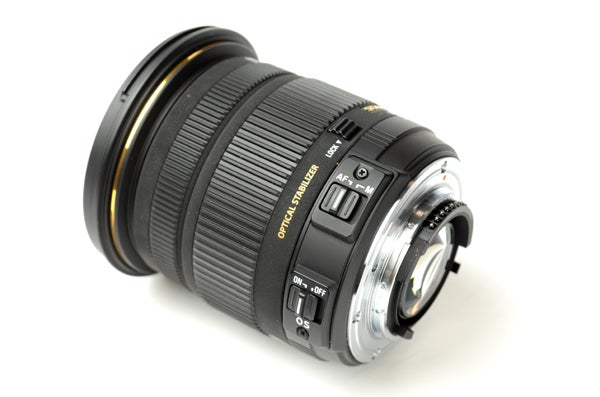 Cutting through the naming jargon – the lens’s ‘EX’ designation signifies pro-grade quality, its ‘DC’ designation marks it out as being specifically for APS-C cameras and ‘HSM’ refers to the Hyper Sonic Motor autofocus mechanism inside the lens. Unlike Sigma’s regular motor-driven autofocus system, HSM has no downward gearing and is powered by ultrasonic waves, making it quicker to start and stop and very quiet during operation. This last characteristic is definitely a plus if you’re using the lens in a sound sensitive environment like a church wedding service.

The final designation is ‘OS’, which stands for Optical Stabilizer and is designed to eliminate the effects of camera shake. Sigma claims its technology offers a four-stop advantage for handheld photography. During testing we found that we were able to consistently achieve acceptably sharp results for stationary subjects at 1/20sec at 17-30mm, and approximately 1/30-1/40sec at 50mm. Of course, these results will differ slightly from person to person, depending on how still they can hold a camera.

In use the Sigma 17-50mm clearly distinguishes itself as a professional-grade lens in terms of both performance and image quality. It’s an especially easy-to-use lens too – the zoom ring falls within near perfect reach of the thumb and middle finger, with the manual focus ring within easy reach just beyond. The zoom ring is 21mm wide, so there’s plenty to get your fingers around. 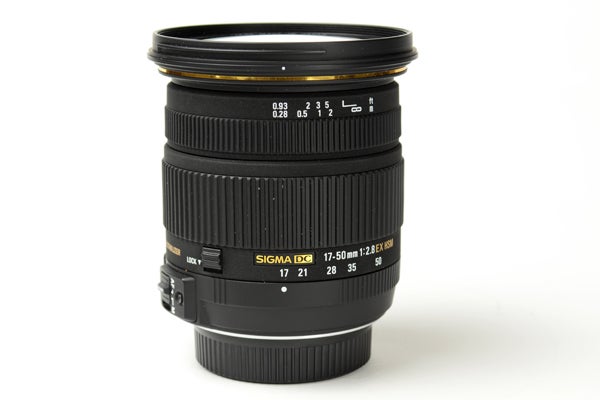 The zoom action itself is smooth and nicely weighted, with just the right amount of friction. The level of resistance remains constant throughout the entire focal range, so there’s little chance of lens slip should you be pointing your camera upside down at 17mm, or upwards at 50mm.

With our test lens attached to a Nikon D7000 we found focusing near-instantaneous in good to moderate light outdoors, and even indoors under less than ideal artificial light. When light levels drop beyond this, and with our D7000’s AF Assist light switched off, we did encounter some incidence of focus hunting, although this is not unusual.

Manual focusing, however, can be a bit fiddly with barely an inch separating infinity from the Sigma’s minimum focus distance of 28mm. When using a tripod we found it easier to focus using the maximum magnification in live view. Achieving precise focus when shooting hand-held through the viewfinder, can prove a little fiddly though.

Macro capabilities aren’t really the Sigma 17-50mm’s strong point either, although it does offers a minimum focus distance of 28cm throughout its range, with a maximum magnification ratio of 1:5. Sigma also makes a non-stabilised ‘Macro’ version of the 17-50mm f/2.8, so if you are particularly interested in photographing things up close, you may want to take a look at that lens.

Overall we were impressed with the Sigma’s performance. We found the lens to be at its sharpest between f5.6 and f/8 at 27mm, with f/11 also able to produce very sharp results. At these settings the centre is, as might be expected, sharper than the edges, although edge sharpness remains acceptable. All-round performance at 17mm was also very good, although at 50mm we did notice a slight loss of resolution throughout the entire aperture range.

Given that the constant f/2.8 aperture is a big part of the Sigma 17-50mm’s appeal, we were pleased to get good results when using the lens wide open – at least in the centre and borders. Again, we did get slightly better results at 17mm and 28mm than at 50mm, although the difference was pretty marginal. On the flip side, we found resolution tailed off quite quickly beyond f/11 to the minimum aperture setting of f/22. 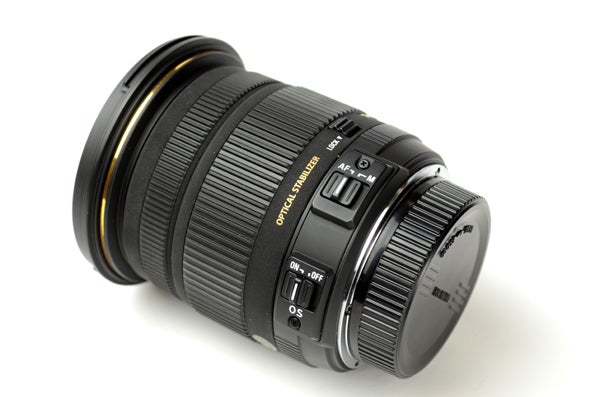 We’re pleased to report that the Sigma performs well in other areas too, helping to produce images with remarkably good levels of contrast and plenty of ‘pop’. Thanks to the FLD elements, chromatic aberrations are very well controlled. That’s not to say they are eliminated altogether, although they are certainly kept to a minimum.

One area where the lens does fall a bit short is barrel distortion, which is fairly pronounced at 17mm. By 24mm things have improved and by 34mm the Sigma is distortion-free. At 50mm a very small amount of pincushion distortion can be seen.

Having not tested these lenses individually, we’re not able to compare them directly to the Sigma 17-50mm lens on review here (we hope to get them in at some point in the future of course, at which point we’ll be able to make some direct comparisons). What we can say, with absolute certainty though, is that the Sigma 18-50mm f/2.8 EX DC OS HSM is a very good lens in its own right and, as such, will take some beating.

Verdict
Whether you’re buying your first DSLR and want to upgrade the standard zoom kit lens to something a bit more special, or a DSLR owner looking to build a lens collection, the Sigma 17-50mm f/2.8 EX DC OS HSM is a good place to start . While its build quality could be a little tougher and its manual focus ring a little less fiddly, it still has plenty going for it. Capable of good results when used wide open, its constant f/2.8 aperture is as useful as it is creative. Add to this speedy AF performance, built-in optical stabilisation and impressively sharp images from corner to corner at f/5.6-f/11 and it all adds up to a very good package. If you’re looking for a standard zoom upgrade, it’s certainly worth considering. 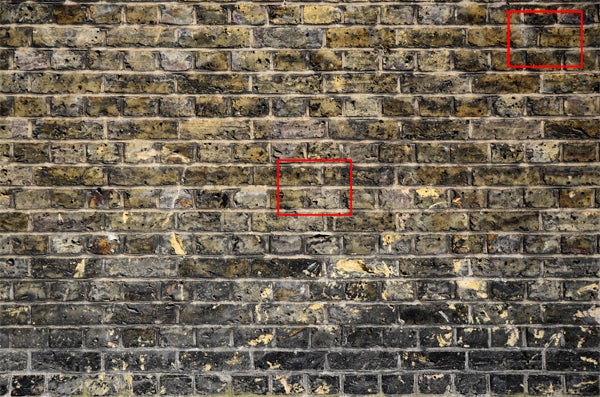 Here we have the image (reduced in size) showing where the following centre and edge crops were taken from. We’ve reproduced all of these crops at 100%. 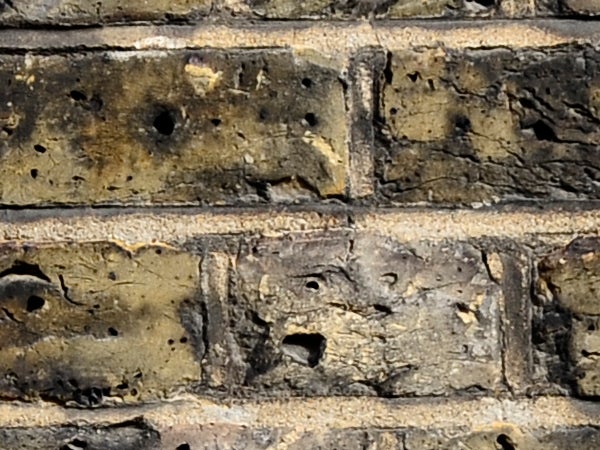 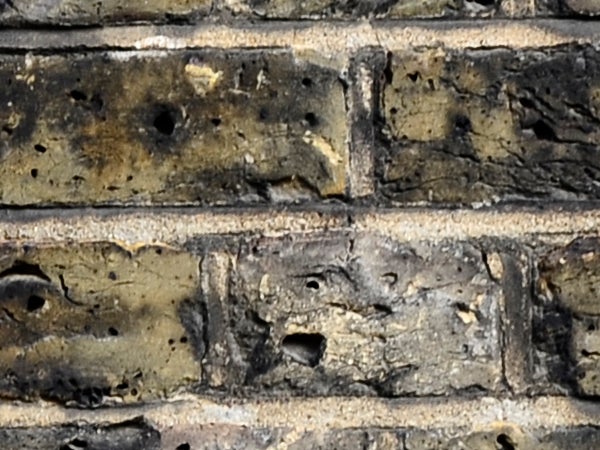 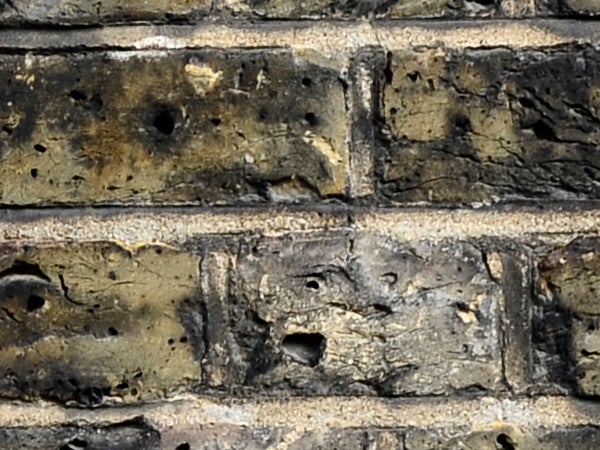 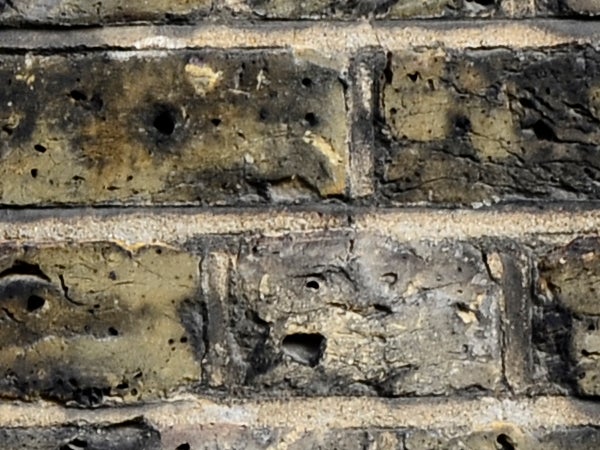 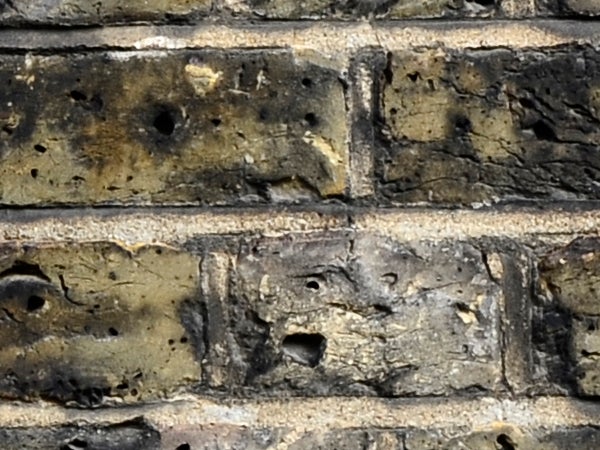 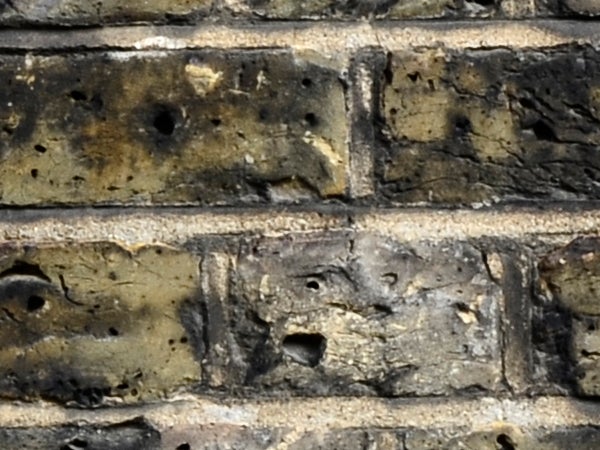 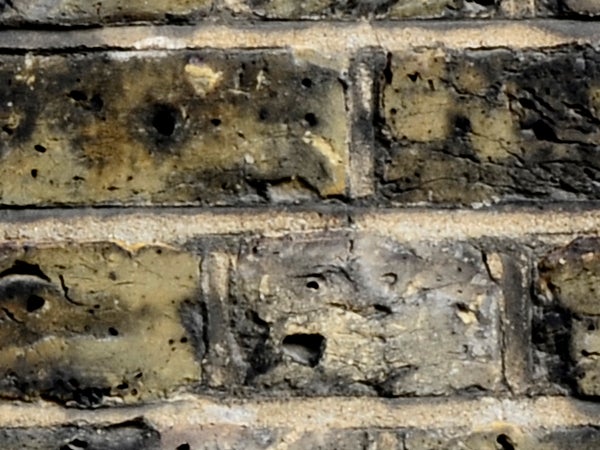 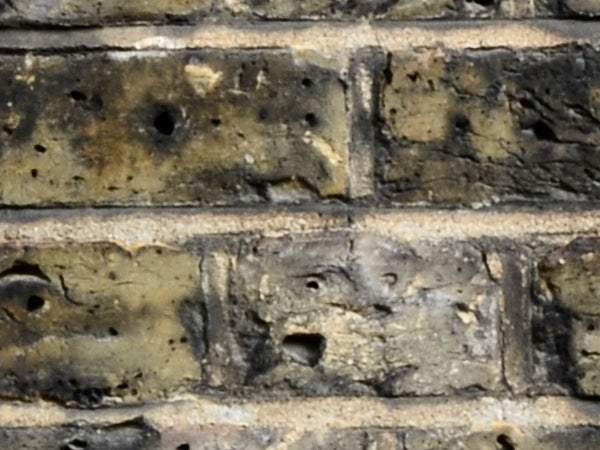 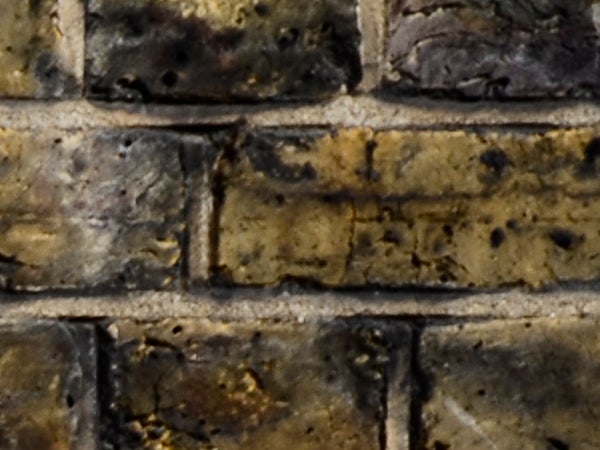 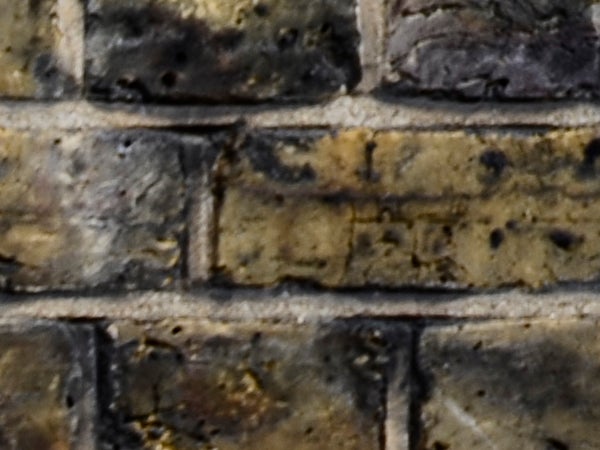 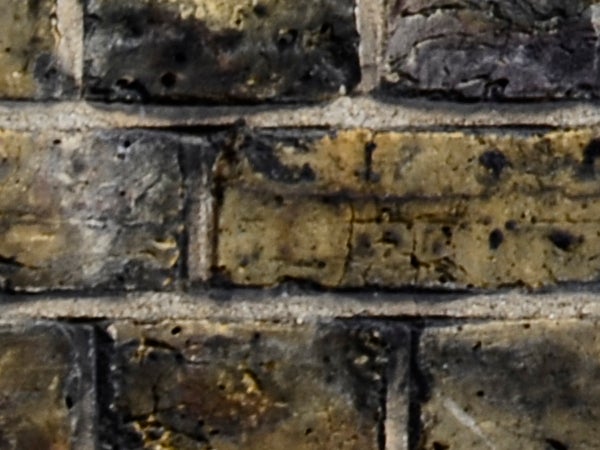 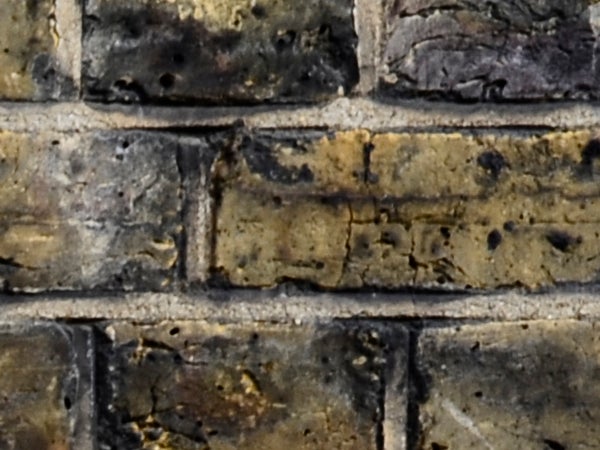 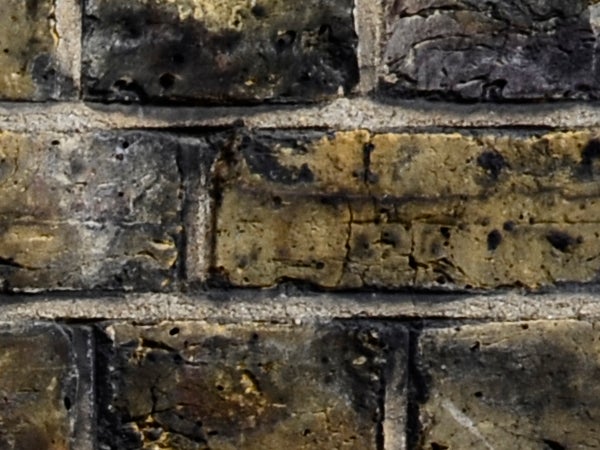 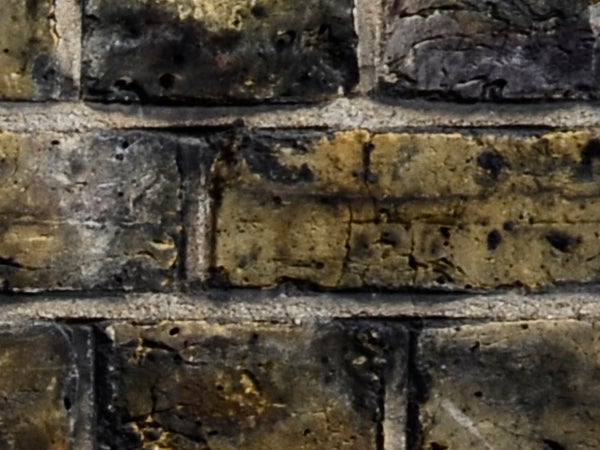 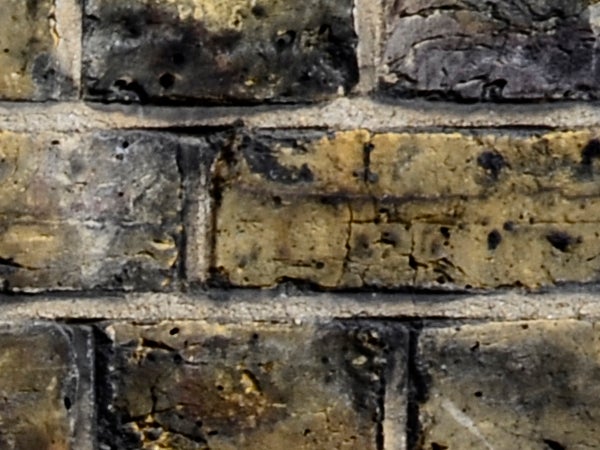 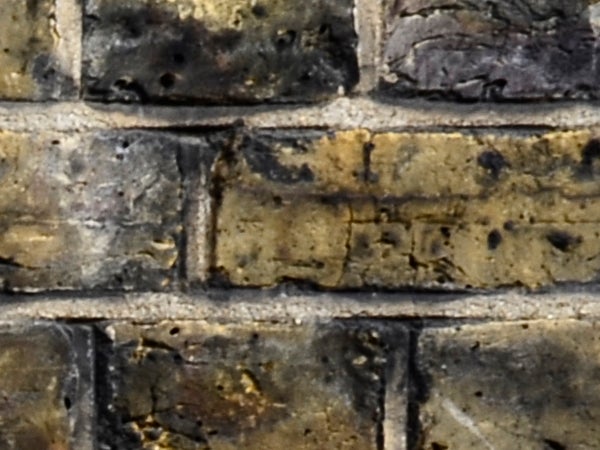 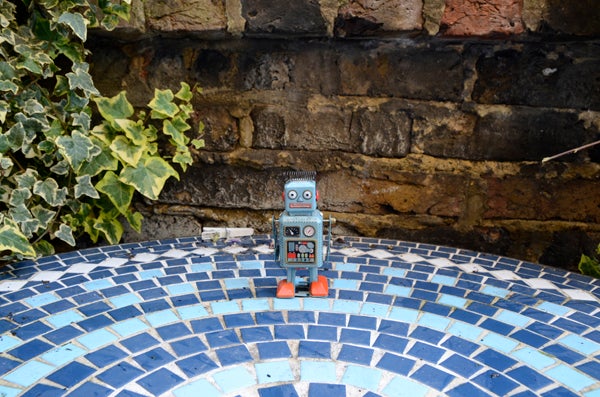 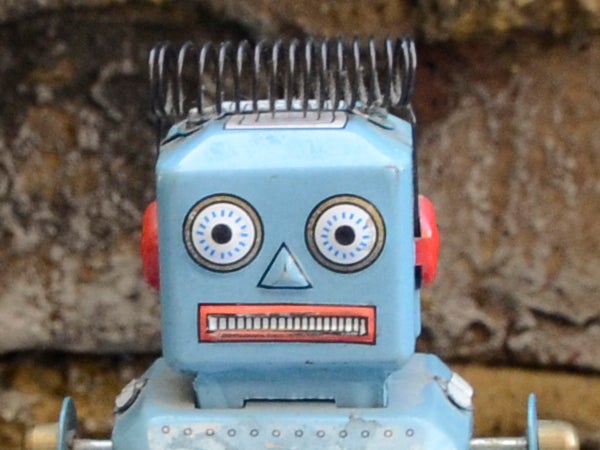 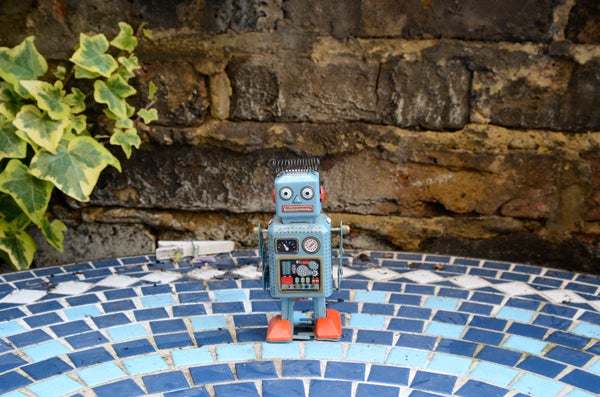 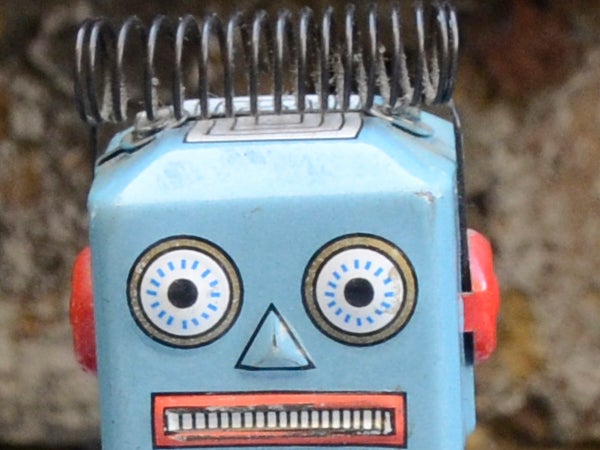 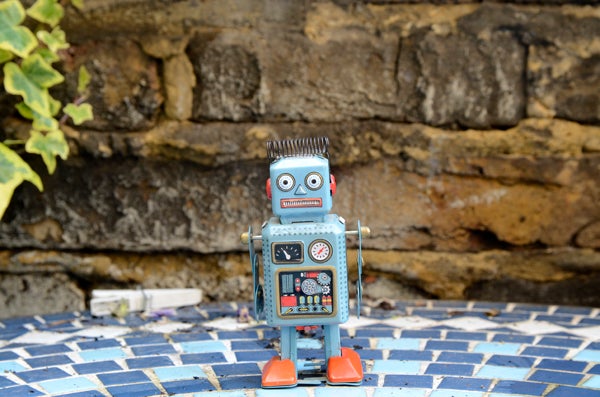 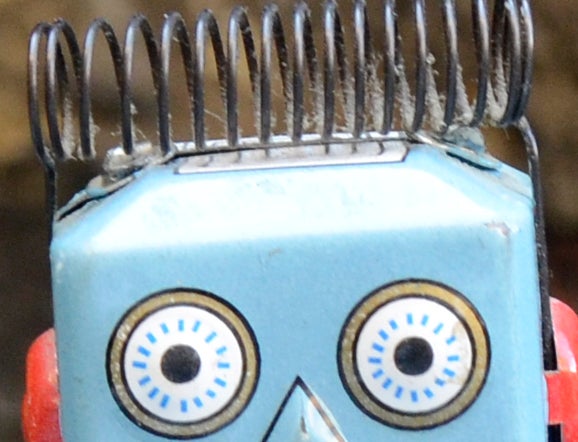