The emergence of cheap mobile broadband deals from all the major operators in the UK was one of the biggest stories in tech last year. Suddenly choosing broadband wasn’t simply a case of comparing the best ADSL and cable deals, but instead it became a three-way choice between ADSL, cable and mobile services. Naturally, there is a trade off between the faster speeds and higher data download allowances on offer from fixed line deals compared with the added benefits of mobility, but for many people having mobile broadband as their only Internet connection became a real possibility. 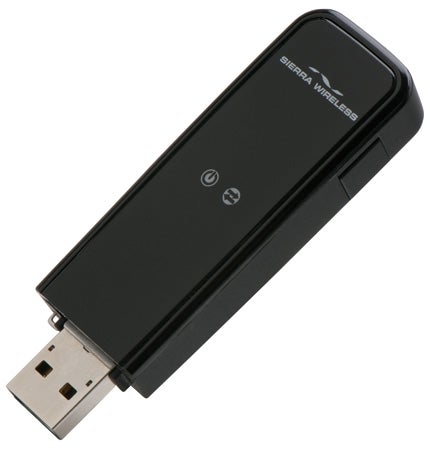 Of course, to use mobile broadband you need either a laptop with HSDPA support built-in or a USB broadband modem. There’s no denying that most people are not really interested in the type of modem that they use as they just opt take whatever they’re given by their mobile operator and in reality many people will get this modem as part of a broadband deal from O2 where it is available from free as part of their business mobile broadband deal. However, if you’re more discerning or just want a modem that’s not tethered to a particular operator then you can also buy this modem with its original Sierra Wireless branding for around £145. That’s not an inconsiderable sum so just what do you get for your money? 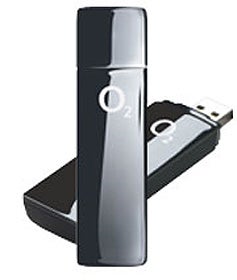 The modem is supplied in a pretty non-descript card board box, but when you open it up you’ll find not just the modem, but also a USB extension lead for hooking it up to computers or laptops that don’t have enough clearance to let you insert the dongle directly into a slot. Sierra Wireless also includes a plastic clip that lets you mount the modem on the side of a laptop screen and a small satchel with a rope tie at the top to keep all the various bits together when you’re travelling.


The dongle itself is a little bit larger than most of the others we’ve used recently. For example, although it’s around the same length as the Huawei E160 used by the likes of Virgin Media and Orange for their mobile broadband services, it’s slightly thicker which means it won’t easily fit into USB ports that are slightly awkwardly placed. For example, it wouldn’t really fit comfortably in the side USB ports of a Sony JS2E all-in-one PC as the side of the case on the Sony is slightly angled. However, it did fit into this machine’s rear USB ports without any problems. Still, the extra girth does mean that the USB extension lead for the dongle may come in handy from time to time.

Naturally, to get your mobile broadband up and running you have to place your SIM card in the dongle. This slides into a spring loaded push slot just above the USB connector. As with many of the latest dongles, the 885 can also work as a microSD card reader or you can simply leave a memory card in it so it doubles up as a USB memory key. Memory cards are pushed into a spring-loaded slot just underneath the SIM card holder and when they’re loaded they appear to your PC or Mac as a standard removable drive. 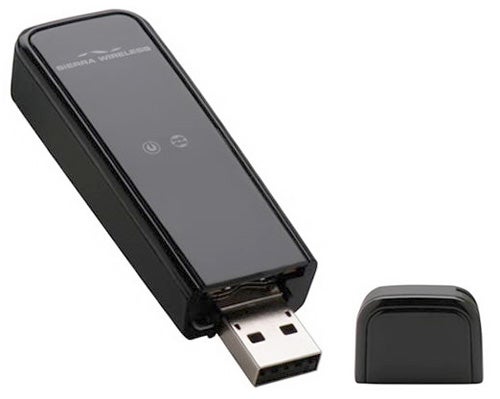 The only other outwardly notable features on the dongle are the two status LED lights at the top and a small antenna connector hidden behind a rubber flap on the front side edge. The latter allows you to connect the dongle to an external aerial in areas with poorer signal coverage. 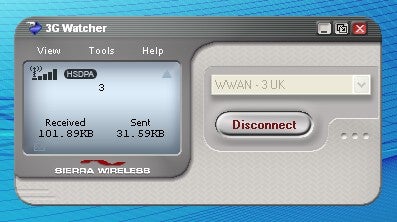 As with pretty much all the latest mobile broadband dongles there’s no installation CD included in the box. Instead, the modem has a small amount of built-in memory, which is used to store the various software and drivers needed to get it working with your computer. All you have to do is plug the modem into a spare USB port on your computer and as long as you’ve got autorun turned on your PC the install will kick into action. 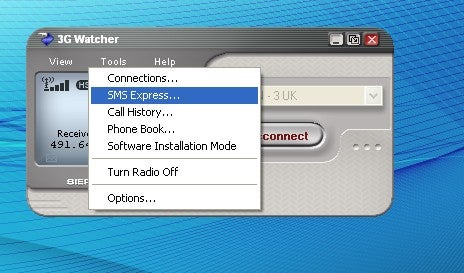 Along with the actual drivers for the dongle, the installer also loads the Sierra Wireless 3G Watcher application. This resides in your system tray ready to spring into action when needed. Essentially 3G Watch’s role is to let you manage your mobile broadband connection as well as send SMS messages via the dongle. The main window shows you the current signal strength, whether HSDPA, 3G or GPRS is currently being used for the connection, and also the number of megabytes sent and received during the current session.

The modem supports tri-band operation for 3G and quad-band for EDGE and GPRS with a max support download speed of 7.2Mbps. We tested the modem on 3’s network around East London using a Toshiba NB100 netbook. In terms of speed it put in a decent performance clocking up an average download speed of between 2.1 and 1.6Mbps with around 0.32Mbps for uploads. 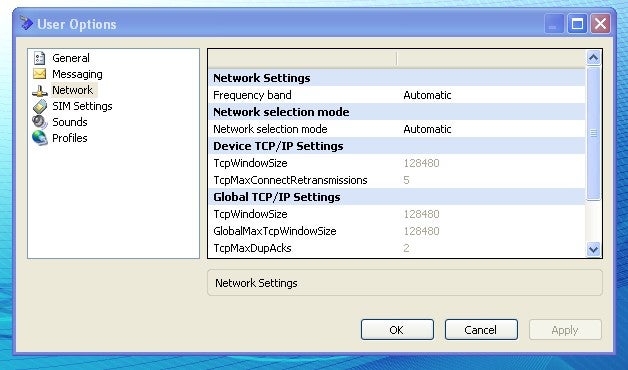 Interestingly it produced these speed consistently rather than varying hugely according to signal strength as some other broadband modems that we’ve tested tend to do. In addition, the modem seemed to hold on to a signal better than some of its competitors, which may be a help if you live in an area where the signal strength for your chosen broadband carrier isn’t the best.

Perhaps some of this performance can be explained by the Compass 885’s use of Sierra Wireless’ TRU-Diversity antenna system, which aims to improve performance in areas with lower signal strengths and reduce the number of dropped connections. As our results showed, it certainly seems to be having the desired effect.


On the downside the dongle does seems to draw quite a lot of power and we noticed that using it for prolonged periods on the NB100 seemed to reduce battery life by a about a third, which is something to bear in mind if you’re planning on making heavy use of it on the road.


It’s a tad disappointing that the 885 is a bit bulkier than other mobile broadband dongles and also that it places pretty high demands on your laptop’s or notebook’s battery. However, it’s consistently good data rates and strong performance in weaker signal areas may make it a worthwhile purchase for some.