What is the Siemens KG30NVW20G?

The Siemens KG30NVW20G is a mid-sized, mid-priced, frost-free fridge freezer boasting a neatly laid-out fridge, concealed digital freezer controls and a traditional rotary knob for fridge temperature. Bringing some modern technology to the table, this model offers LED lighting, multiAirflow cooling for even cooling around both compartments and a salad crisper box with humidity control slider.

The Siemens’ split is very much in favour of the refrigerator at around 70/30 with a useful 184 litres of fridge space. However this does limit the freezer storage to just 66 litres over three drawers. These are solidly built and offer easy access to food, along with a handy little storage pocket in the door for smaller items such as ice lollies. The top two drawers can be removed completely for a little extra space with on-shelf food storage. It’s completely frost free and boasts a quiet 42dB running noise.

This a sleek, all-white fridge freezer with just a Siemens badge and the door handles breaking up an otherwise starkly clean finish. With all the controls on the inside there is nothing to detract from the smooth and easy to clean exterior surfaces. Siemens has eschewed inset door handles in favour of two large and easy to grip handles with chunky grab rails. They feel solid in the hand and make opening the doors easy. Interestingly, the door seals themselves are magnetically mounted making them easy to remove and clean. 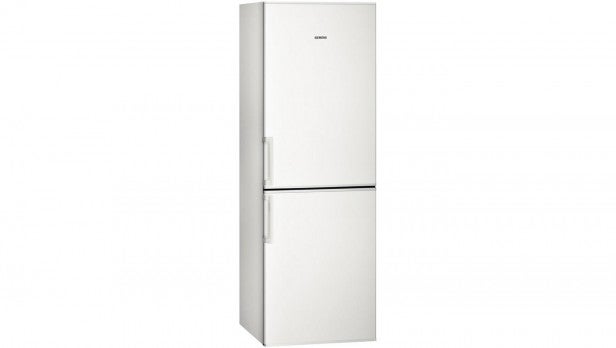 The fridge space follows the exterior design being sleek, plush and robustly built. The four glass shelves and three clear plastic door bins are finished with modern chrome and light blue trim, and the bright white LED side lighting works very well at illuminating every corner of the compartment.

Nice touches include a two-bottle rack that can be slid side-to-side along the shelf for most convenient position and a good size salad draw. The multiAirflow cooling system vents are obvious at the rear of the compartment and this system is fitted with an air freshening antibacterial filter. The large fridge temperature control knob rotates from ‘min’ to ‘max’ for simplicity. We plumped for mid-way for our test and hoped it would be around 4C.

The freezer controls are concealed in the fridge compartment door surround at the very top. This machine is some 20-30cm shorter than some full-height models we have tested, but the controls are still going to be above the head of most users. The freezer adjustment is -16 to -22 degrees C in 2-degree increments, illuminated in greed LEDs.

These sit in line with the main power switch and a super freeze button. The freezer itself is compact but nicely made with clear bins that incorporate large, easy to grab handles. What at first looks like a slim freezer tray at the top of the compartments is actually the outlet for the forced air cooling, again robbing the freezer of a little space. The additional door pocket could be handy for very small items but the manual suggests freezer blocks.

At 170cm tall, the Siemens KG30NVW20G is a good size for vertically challenged or older users who might struggle with the top shelf on a full height 190cm or 200 cm model. The difference in fridge compartment capacity between this and a full height model is almost negligible at 184 litres and the well thought out storage containers mean you can get plenty of chilled foods and bottles inside. 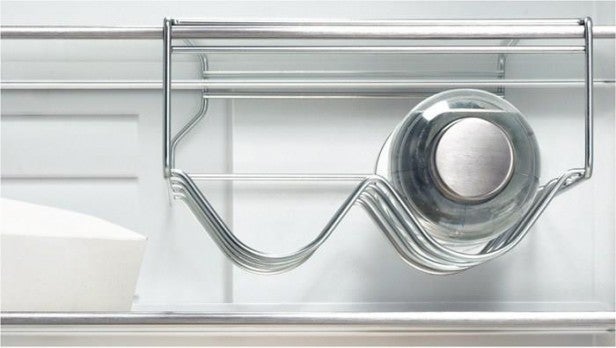 Four glass shelves are ample and many users might even find taking one shelf out to give a bit more shelf height across the other three is ideal. None of the three door pockets have covers and they are not adjustable, but you do get a very deep lower pocket, mid-depth pocket in the middle and a shallow tray at the top for easy access. The large salad crisper drawer is fitted with a corrugated plastic insert in the base and a sliding vent to control humidity and moisture around the food. 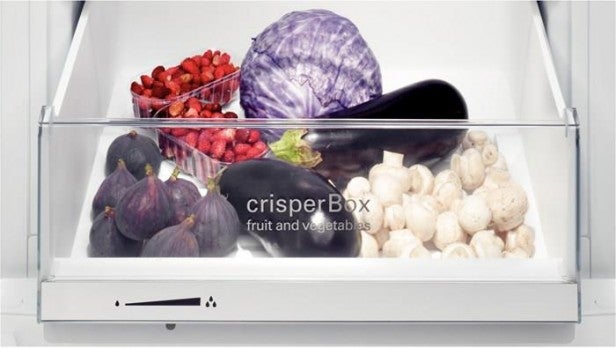 The compromise in capacity comes in the freezer compartment. The extra thick walls for higher energy efficiency, the typically truncated lower drawer and the multiAirflow vents at the top all limit your storage space. At just 66 litres, this isn’t going to suit larger families or those who like to stock up with frozen food in one big shop. Addressing this to some extent, Siemens VarioFreezing features allows removal of the top two drawers and stacking food directly onto the shelves to give you a little extra capacity at the sacrifice of some convenience.

The KG30NVW20G uses a
traditional compressor motor that gurgles into life when first powered
up. As the machine cools there are a few pops and clicks but as things
settle down the Siemens returns to a traditional fridge hum. We measured
this at 43dB, which is a little bit higher than the stated 42dB but
still relatively quiet.

While not getting as near silent as the
flagship high-tech invertor motor fridges we have tested, this
traditional fridge noise isn’t obtrusive although there is a distinct
metallic click when the compressor switches every hour or-so as part of
its cycle.

Siemens KG30NVW20G – How well does it perform?

Using
our regular loading of 0.5kg of mixed fresh food per 10 litres of
fridge capacity, we loaded the fridge compartment with an assortment of
fruit, veg, bottles, jars and cartons and set the control knob roughly
in the middle of its range. The freezer we loaded at 1kg of food per 10
litres of space, distributed around the three drawers and including two
litres of room temperature water in the middle drawer. With this we can
test how quickly this model would freeze down a large room-temperature
item such as a fresh chicken. We set the thermostats to -18 degrees C.

Fridge Performance
With
the mid-setting on the thermostat the refrigerator averaged between 4
degrees and 6 degrees C throughout the test. The forced air cooling had a
very even, stabilising effect in the lower part of the fridge and the
salad drawer, both of which showed very little variation in temperature
throughout the compressor cycle.

The top shelf, while averaging
5-6 degrees C throughout suffered a little from being in front of the
main mulitAirflow cooling vents and ‘bounced’ in temperature through the
hour-long compressor cycle. Under full cooling it would dip to almost
freezing and, as the compressor switched off, would rise to 7 degrees
before starting to cool again. Keeping jars and more robust foodstuffs
on the top shelf would be the best bet. More delicate items would suffer
from so much variation. 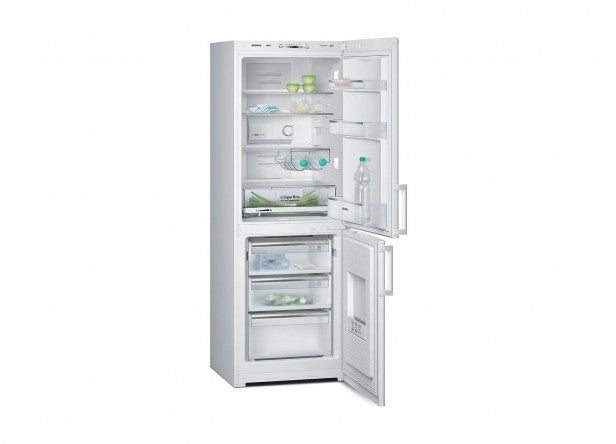 Freezer Performance
Top, middle and
bottom drawers of the freezer averaged -18 degrees, -19 degrees and a
rather nippy -22 degrees C respectively, with the top drawers staying
within +/- 1 degree at all times. Only the bottom draw showed any major
variance of +/- 2.5 degrees over the cycle, which meant it varied
between about -19 degrees and almost -25 degrees C.

While that
won’t do your frozen food any harm, to keep the temperature this low
will use a little more energy than required to keep the compartment at
the standard -18 degrees C indicated on the thermostat. Unusually, given
the rather chilly demeanour of the freezer, the short compressor cycle
meant it took quite a while to stabilise from switch on and our frozen
food sample took a lengthy 24 hours to reach -18 degrees C at its
centre. While that would not make it the first choice for those who
freeze-down a lot of fresh food (rather than put in frozen food from the
supermarket), the food test sample settled at a very stable -20 degrees
throughout the test over several days.

This low temperature had
a positive effect on the three-hour fail test as the food sample raised
barely 3 degrees to -17 degrees, and even the warmest drawer (top) only
rose to -13 degrees during the fail. This would give the Siemens a food
safe time well in excess of 12 hours of power failure, which agrees
with the quoted specification of 13 hours. Its only other anomaly in the
technical test was a rather obvious defrost cycle. Every 24-26 hours
this would briefly (20 minutes) raise all three freezer drawer
temperatures by up to 6 degrees. As they start from a low base
temperature that is not going to be a problem.

Siemens KG30NVW20G – How much will it cost to run?

While
the lower freezer drawers clearly run a little cooler than ideal, the top
draw running at spot-on -18 degrees C means there is no latitude for
artificially raising the freezer’s thermostat temperature. Running at
anything lower that -18 degrees C will use a little more energy than
ideal, which may explain why this model has an A rating and no
higher. That said, it proved to be very efficient and our tests showed
it came in at slightly under Siemens’ claimed 266kWh/annum at just
230kWh – or around £34.50 a year (@ 15p / kWh). Given our 17 degree C
test cubicle is a bit cooler than a typical kitchen and the doors were
opened only half a dozen times a day (much less that a big family might
do), Siemens’ claimed figures are probably about right. 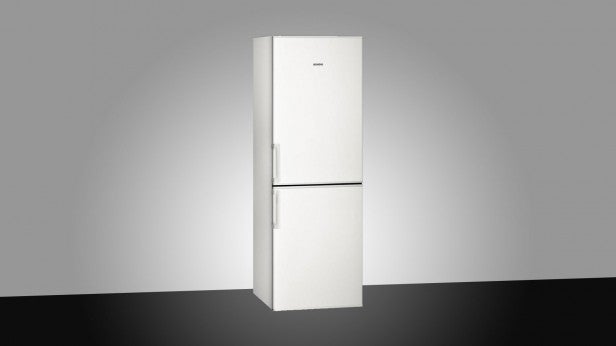 Should I buy the Siemens KG30NVW20G?

The
KG30NVW20G from Siemens is a solid fridge freezer with some nice
usability touches, such as the great fridge layout and easy-grab
handles. It’s let down a little by the limited freezer capacity and the
freezer controls being very high up. But if you don’t want to spend too
much on a fridge freezer, it’s a decent choice. It performs well and is
cheap to run.

A solid, if unspectacular, fridge freezer that will do the job just fine provided you don’t need much freezer space.