We can all agree that small PCs are fantastic. Instead of taking up most of your desk with a large, noisy box, smaller PCs are more discreet, more stylish and just easier to live with. In the past, getting to enjoy such delights meant that you had to have pretty major compromises but today that’s not really the case. Last year I put together a pretty capable mini games machine in the form of a Shuttle SD39P2, so when I was offered a chance to look at another machine from the company I couldn’t resist. 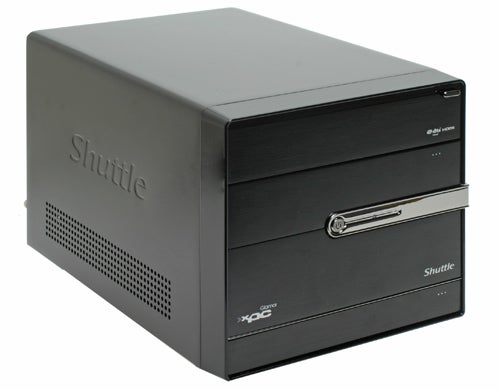 The SG33G6 is part of Shuttle XPC Glamor range. I can’t say I’m too comfortable with the name ‘Glamor’, partly because in the UK we spell it with a ‘u’, but also because I don’t think it fits – sure the boxes are good looking, but I’d hardly call them glamorous. The point is though, if you want to put together a system that you won’t mind being on view then this will certainly fit the bill. Rather than having the power buttons and indicator lights in the middle of the display, on the G6 the strip now runs from the center to the right hand ide. This appears just to be apperances sake but its none the worse for that. The power button is now circular, right in the middle and has a blue backlight, which is very nice and along side this are power and Wi-fi indicators – yes, this system has Wi-Fi built-in. The front panels of the Shuttle are brushed aluminium while the rest is painted. The feel of the construction is definitely up to Shuttle’s normal high standards – its cases are very solid and robust, as you’d expect for the premium price. 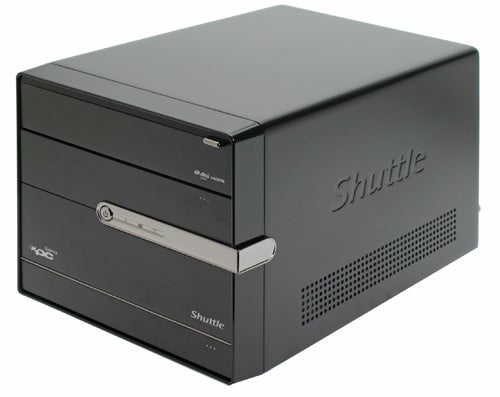 Shuttle has a confusing number of models and one thing its web site doesn’t do is make it easy to understand the differences between them. The SG33G6 Deluxe is the top-of-the-range but its unique features are limited to its fingerprint reader and integrated Bluetooth. The latter does seem like something of a gimmick, but the latter is certainly useful. Both of these make sense for a main work machine, but these features don’t seem to sit well with the other aspects that Shuttle is promoting on the G6, namely the DTS Connect and Dolby Digital Live! audio, both of which will let you output a digital bitstream to an external amp, and the HDMI connection with HDCP support,are all more suited to a media center PC. Indeed, if you’re looking for a system to act as a Media Center, you’ll be better off with the SG33G5M (D-VO), which is based on the same chipset, but has an integrated VFD and an integrated IR receiver and an MCE remote. While Wi-Fi is an option on the SG33G5M, it’s built-in on the G6. 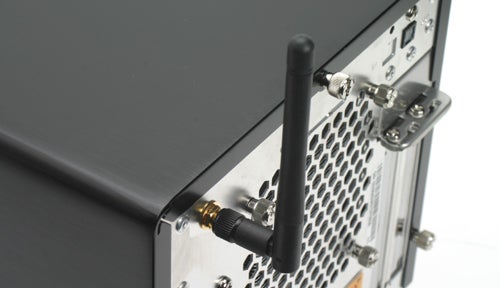 Looking at the box, you get one 5.25in external bay under a front cover at the top for an optical drive. This sports an eject button at the very top right, which connects to a lever that will press the Eject button of your drive – to get this working you need to ensure you line up your optical drive correctly when you are installing it, which takes a bit of fiddling. The bay beneath this one opens by pressing a catch at the top right of the cover, and opens up to reveals a space for a 3.5in bay, which would logically be filled by a card reader. 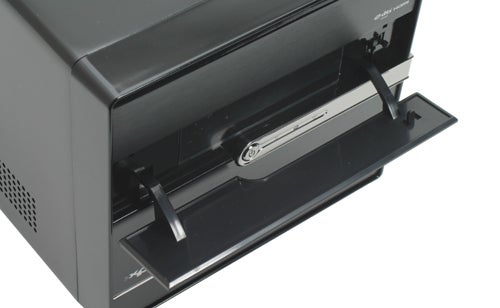 As with most Shuttles a flap at the bottom comes down to reveal, two USB ports. The one on the left is configured for use as a ‘Speed Link’ port – which enables you to hook up two PCs and transfer files between them. However, this requires the use of a USB cable with two ‘A’ connectors at each end and Shuttle does not supply one. Unless you get one, and unless you actually want to use this feature, the left port then is redundant, leaving you with only one usable one at the front. You do get a 4-pin Firewire connector and headhone and microphones sockets, which are very well placed. On the left you’ll find the fingerprint reader, which once you’ve installed the software let’s you ‘enrol’ your fingerprints. It proved a little hit and miss for me – working with one finger for a short time and then deciding it didn’t recognise it anymore. If this happens you need to enter your password in anyway, so it didn’t really turn out to be a time saver. However, enrolling a different finger solved the problem.

At the rear, you’ll find a further four USB ports, two E-Sata and a full size 6-pin Firewire button. The Ethernet port is of the Gigabit variety, and there’s five analogue connectors for the integrated Realtek High Definition audio. There’s also an optical out, but this port is bizarrely placed at the top of the rear of the case, above the two rear brackets.


On the other side there’s a VGA port and an HDMI port. If you don’t have an HDMI equipped display there’s no issue as an HDMI to DVI connector is supplied so you can hook straight up.

Internally, you’ll find one PCI Express slot and one PCI along with two memory slots. The slots will support both 667 and 800MHz RAM, but Shuttle states that the system will support 1,066MHz if overclocked. To that end I got hold of a 2GB set of PC2-8500 Crucial Ballistix DDR2. 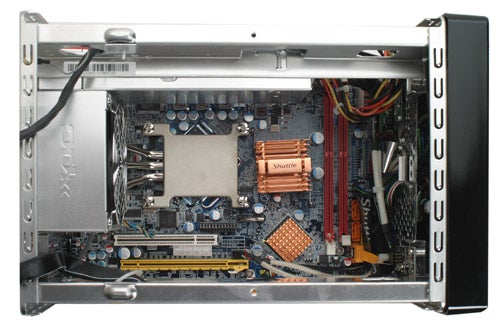 Installing the CPU is a bit involved as the ICE system that Shuttle uses to cool the CPU needs removing in its entirety. Thumbscrews at the rear for the fan and then the heatpipes and heatsink block have to be removed before you get to the CPU socket. As you might expect for a small system, there’s not too much room to get to the three SATA ports. The wireless module is located above the PSU and the cable that connects it to the port runs across the interior and plugs into the board, but in the deluxe model it’s preinstalled so you’re saved having to deal with installing it. 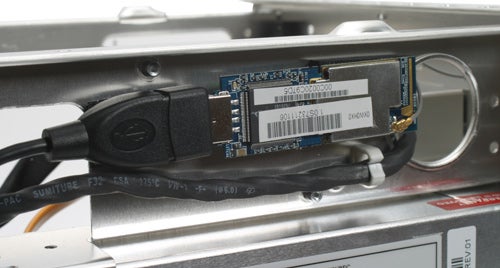 The processer I chose to build the system on was an quad-core Q6600, the same we used for the Shuttle SD39P2. To keep comparison similar I also used a 150GB Western Digital Raptor, which made the system feel fast and agile. In the top bay I installed a Blu-ray optical drive. This was the first time I had put together a Blu-ray system myself so I was keep to see if I could get it to work. I hooked up to a HDMI/HDCP equipped 24in HP display via the integrated HDMI port. I was immediately pleased to see that audio was passed over the HDMI port, and with built in speakers it made for a tidy and convenient setup. 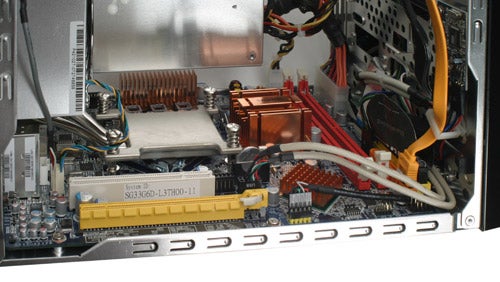 To test I used the copy of Casino Royale on Blu-ray that’s floating round the office, and used Cyberlink Power DVD Ultra BD Edition – which is surely an application that’s going to have to change its name before long. However, when we pressed play we were hit with a, ‘your graphics driver is not compatible’ message. Checking with Cyberlink’s web page, it only lists nVidia and ATI parts as being compatible, which left me worried that one of the main features of this system would be hamstrung by a lack of driver support. Fortunately, Intel has a newer driver for the G33 integrated graphics on its web site, and this solved the problem. Full screen, Blu-ray playback with no dropped frames, duly followed, which was great to see.

While playing the Blu-ray I checked the power drain using a power meter and only around 115Watts was being drawn, which isn’t too bad. The PSU is rated at 300W, which should mean you could just about get away with an 8880 GT in there, though you’d really be pushing it and the fans will run quite loudly. You’ll also need to source your own molex to six-pin adaptor, as one isn’t supplied. However, this isn’t a system aimed specifically at the gamer and as such we only ran 2D tests on this system. 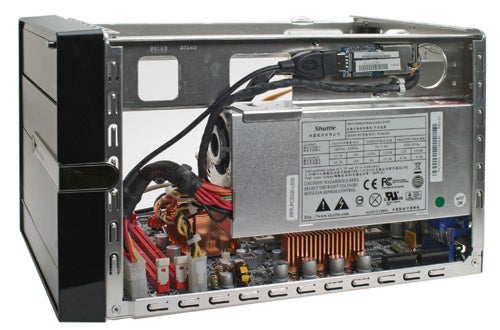 As you can see it doesn’t quite match the SD39P2 in terms of speed, but of course we did test this with an 8800 GTX as it doesn’t feature integrated graphics. However, generally speaking the SG33G6 system is plenty fast, and it was certainly a lot nimbler and more pleasant to use than my regular work system. 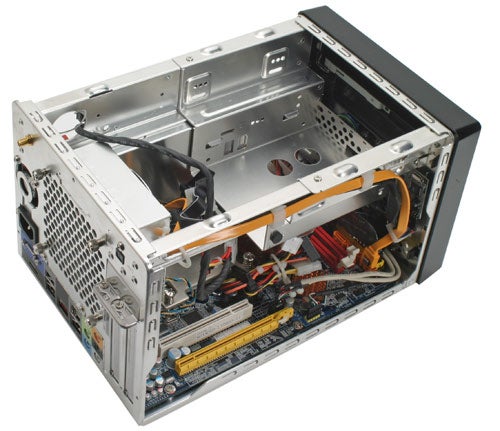 If you’re the more adventurous type you’ll find that there’s a wealth of options in the BIOS for tweaking and overclocking. I went straight in and increased the FSB from a standard 266MHz (quad-pumped 1,066MHz) and upped it to 333MHz (1,333MHz quad-pumped) and took the CPU to 3GHz. With the 1,066MHz Crucial RAM in place, the system was perfectly stable reflecting on the flexibility and quality of Intel’s marvellous Q6600 and Shuttle’s high quality motherboard. Of course, you’re limited by Shuttle’s ICE system and don’t have the luxury of adding custom fans and such like, but with some time and effort and through trial and error, you could most likely wring more from this system.


Shuttle has once again produced another fine system. While the fingerprint reader is a bit of a gimmick, the integrated Bluetooth and Wi-Fi are welcome additions. The HDMI connection works without issue once the latest drivers are installed, and using the integrated graphics the system is fast and quiet. As such, the SG33G6 Deluxe is more suited as a multimedia desktop rather than a dedicated media or games machine, but has enough in its locker to take on both of those tasks should the need arise. 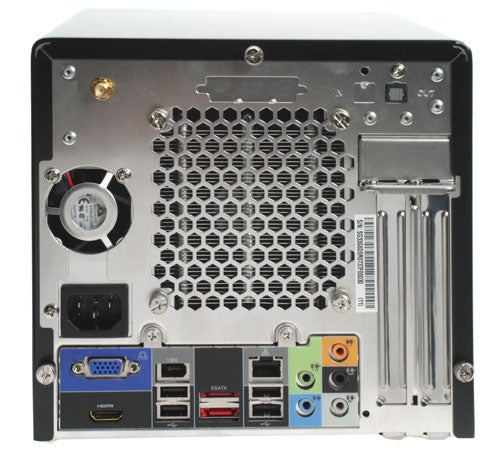