It is a truth universally acknowledged, that a consumer in possession of a small form factor PC must be in want of a media centre system. Or at least, that’s what Jane Austen would say, and in most cases she’d be right. With their sleek, minimalist looks and compact dimensions, SFF systems, and Shuttles in particular, lend themselves to the task of the highly capable but aesthetically pleasing all-purpose lounge PVR.


Despite increasing competition, Shuttle has managed to retain its premier status in the SFF market and is continuing to release innovative designs. Meanwhile the 2005 version of Microsoft’s Media Center Edition (MCE) OS is its most polished yet. The combination of the two together should make for a fine match.


While Shuttle is predominantly known for its barebone systems, the G5 8300M is actually a complete finished solution. As I recounted here, creating your own box based on MCE 2005 is possible but can be quite a trial. It therefore does make sense to buy a preconfigured system, especially one that’s as pleasingly integrated with the OS as this Shuttle.


Despite it’s slightly baffling name, the G5 8300M has nothing to do with IBM’s G5 processor, used, at least for now by Apple. It’s actually based on the XPC SB83G5M, which supports Intel CPUs on a 915G chipset with the ICH6R south bridge and a Prescott Pentium 4 processor running at 3.0GHz is employed here. While you might think this overkill for a media centre machine, it’s not; it’s actually spot on, as this is the minimum speed required to comfortably run true high definition 1080p content, which will be welcome once such material is available. It also enables Media Center’s demanding effects and transitions to move along nicely, making using it a pleasurable experience. The CPU is backed with two 256MB sticks of PC3200 DDR RAM. The hard disk is a capacious 200MB, which is pretty much the minimum that you’d want for a machine such as this. However, it’s formatted as a single drive, which I always find risky. I’d create a second partition and place all the data and recorded programs on that, so that if you ever need to reinstall Windows you don’t have to worry about losing your stuff. 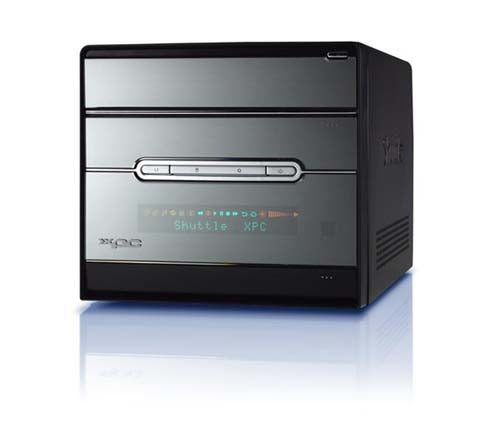 The 915G chipset does feature integrated graphics but sensibly the connector at the rear for this has been blocked off, so consumers won’t attempt to plug in their display to it, rather than the dedicated graphics card. This is an ATI Radeon X300SE so if you’re looking for an all-in-one media and gaming solution – this isn’t it. Rather surprisingly though, the card isn’t passively cooled. This is something of an odd decision by Shuttle as it would seem to be something of a no-brainer for a media PC, which logically should be seen and not heard. The fan on the card isn’t particularly large or particularly loud but it still increases the noise floor. There are actually four fans in the Shuttle system, with the demon spinners located on the chipset, the PSU and on the rear fan that draws out the air from the I.C.E Heatpipe used to cool the CPU. Considering all this, the noise level is remarkably subdued but next to a Sky + box the presence of the Shuttle was quite audible.

At least though, the system looks cool. The chassis used is one of the smartest looking that Shuttle has yet produced. The front is mirrored and contains a small Vacuum Fluorescent Display or VFD. This actually interfaces with Media Center and shows where you are in the operating system, displaying items such as Recorded Shows or Home for the default location. And if your playing a video from the hard disk, it even scrolls the name of file. The rest of the time it simply displays the time and date, like any VCR, though if you’re after that genuine ‘Old Skool’ look you’ll have to set it to flash, ‘00:00’ the whole time. When recordings are set, a small timer icon is illuminated and a small flickering light indicate hard disk activity. 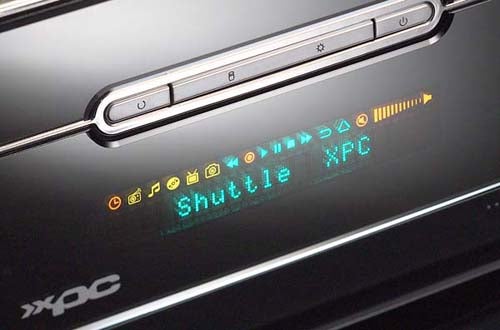 To keep the lines of the facia clean Shuttle has flaps covering the front ports and connections of which there are many. At the top right a silver button will release the tray of the DVD Writer, capable of burning dual-layer discs. Beneath this is another flap that hides the card reader, ready to ingest Compact Flash, Memory Stick, SD and Smart Media. The usefulness of this in a machine such as this was really brought home to me when I wanted to show off some pictures I’d taken. I simply took the card out of the camera, popped it into a card slot and the Media Center let me easily browse the contents in a slideshow. This can be done with or without a moving, ‘Ken Burns’ type effect or controlled manually via the remote. At the base of the machien is yet another flap, this time covering the two USB 2.0 ports, a small four-pin Firewire connector and headphone and microphone sockets.


Round the back the Shuttle G5 8300M offers a number of ways to connect to your display. The best option would be via the DVI connection, ideal for a suitably equipped LCD, plasma or projector. Alternatively you’ve got a VGA connection or S-Video out for use with a CRT TV. This image from this was noticeably better than from my own hand-built Media Center PC, with a solid and clear image. 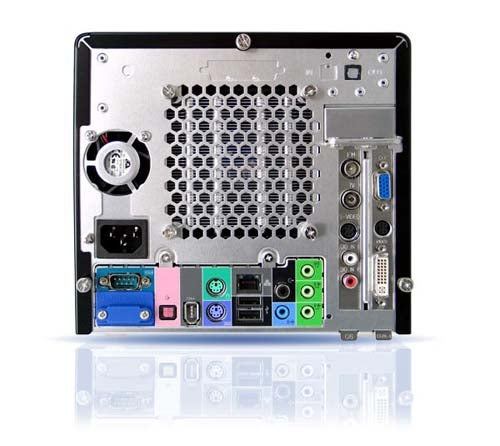 Audio connectivity is good too, with analogue outputs for connection to PC style speakers or both coaxial and optical digital out for hook up to an external decoder. While there’s an integrated LAN port the Shuttle is also available with a wireless module and our review sample was supplied with it in place. However, it isn’t included at the price we’ve quoted at the top of this review. It is a handy option though, and it enabled me to play content over my home network from a PC located upstairs without having to worry about having to run an Ethernet cable across the whole house. That said there were occasional glitches so it’s always preferable to play content locally. I also was unable to get the supplied wireless utility to work. Instead I turned this off and using Windows to control the card instead, without problems.

Next to the graphics card is an AverMedia M150 TV tuner card. Unfortunately, it’s analogue which has to be said is a big disappointment. We’re in a digital age and as almost everybody with an aerial can pick up a digital signal it’s a real shame not to have one supplied. In the UK, it limits your choice of content to the five terrestrial channels and a soft picture that isn’t in widescreen. Those in Europe will want to replace the analogue tuner with a digital one or use an external receiver. The omission is a great shame as the downloadable EPG is great and provides more information on screen at once than Sky’s. Pleasingly the machine can wake up for a recording from standby mode, so you don’t have to leave it whirring away the whole time.


The whole kit and caboodle is controlled by the standard MCE 2005 remote control, which actually is pretty good. It’s backlit and the buttons have a good feel, though some of them are oddly placed and sized. Unfortunately, unlike the Wi-Fi, the remote receiver isn’t integrated and is instead a large block that connects to the PC via USB. Shuttle also doesn’t include a keyboard or a mouse. When it comes down to it this is a PC, not an appliance, and you really will have to attach them at least occasionally. A Shuttle optimised device, perhaps with controllers built into the keyboard and designed to match the case should in my oopinion be high up on Shuttle’s internal ‘to-do’ list.


Overall though the Shuttle G5 8300M was a pleasure to use though it wasn’t completely without problems. On one particularly hot day, the machine actually locked-up, and on another occasion Windows crashed with an error message. However aside from this, over a period of a couple of weeks of regular use, it proved to be reliable, recording programmes as scheduled, playing vidoes and slideshows.


If you want a Shuttle based Media Center 2005 machine but don’t want the hassle of building one yourself the Shuttle G5 8300M is a very good starting point, being pleassingly designed, well featured and speedy in use. However, the lack of passive cooling on the graphics card is something of a mystery and you have to supply your own keyboard and mouse but the real downside is the lack of digital tuner and it’s that, that prevents the system from picking up an award. These points aside, the Shuttle G5 8300M is a really very good indeed.