Shure isn’t a company that needs to update its products often. Among the audio nut crowd, they’re held aloft as one of – if not the – most reliable manufacturer of earphones around. The SE215 takes over from the classic SE210, adding a detachable cable and a new earpiece design.

Shure’s new range of SE215, SE315, SE425 and SE535 earphones are the (fairly) new kids in town, and in this revolution the SE215 have arguably gained the most of them all. They’re not cheap at around £100, but they benefit from the detachable cable design and great cable quality of their more expensive brothers.

The previous-model Shure SE 205 had a less bulbous look than the manufacturer’s higher-end models, but now the whole set has adopted a similar look that’s similar to the all-time classic Shure SE530. It’s curvier and more organic-looking and demands to be worn over-the-ears. Like Ultimate Ears’s top-end earphones, a malleable ear loop is built into the 5cm or so of cable that shoots out of the earpiece.

The Shure SE215 are available in clear plastic or shiny black, the former exposing the wires inside the housing and the gold connectors that form the earphones’ detachable mechanism. The bud itself swivels around freely on this joint, with coloured dots on each side of the divide showing you the position they need to be in to be pulled apart – red for the right side and blue for the left, so you don’t get them mixed up. 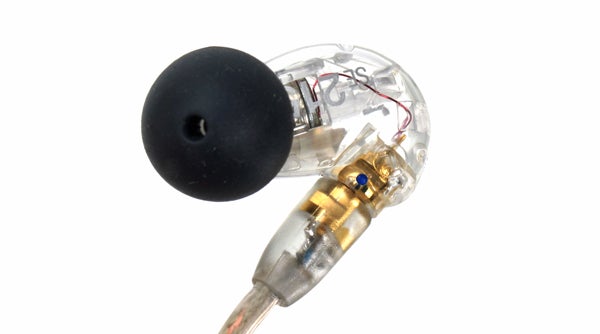 Adding extra moving parts to something as fragile as an earphone is always a concern, but the cable connection seems very solid. A good hard yank is required to pull out the earpiece, and you should only need to do so if your cable packs it in. This shouldn’t be a common occurrence either judging by the heavy-duty right-angled jack used here. It’s exactly the same as the cable used in the Shure SE535, SE425 and SE 315. Replacements cost upwards of £40 (where Ultimate Ears’s cables tend to cost around £20) but this should indicate what a bargain these earphones really are.

The cables have a slightly textured finish that’s very successful at reducing tangles. They’re reinforced with Kevlar too. It’s as though the Shure SE215 is a C-list celebrity invited to an A-lister’s dinner party and treated to the fine dining and adulation of the superstars around it. That’s not to do these earphones down – we’re comparing them directly to the SE535 here, which cost 3-4 times the price. 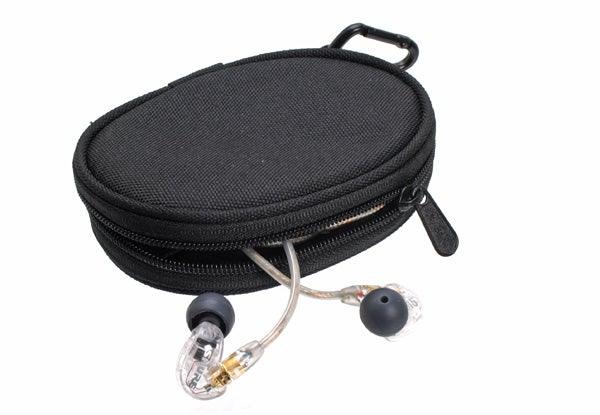 The Shure SE215 come with six pairs of foam and rubber tips, Shure’s standards. These are of excellent quality and you should have no trouble attaining a good fit with them. Also typical of Shure’s SE series, sound isolation is excellent. These earphones are the perfect partner for a noisy commute, blocking out screaming children and inane conversations with ease. 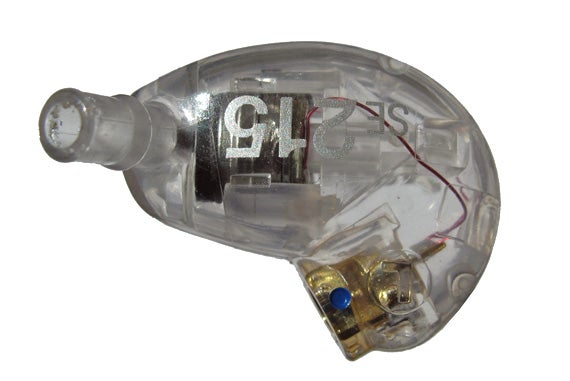 Dynamic drivers are the kind generally used in lower-end earphones, while balanced armature drivers tend to deliver greater accuracy. Armature earphones are available at the price, but a basic comparison of the two doesn’t result in a flawless victory for the balanced armature army. The word that’s so-often associated with dynamic drivers is “fun”. 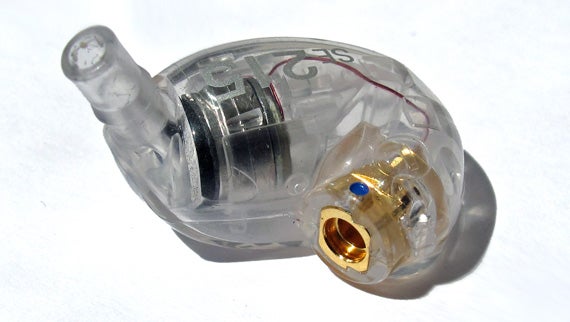 The bass thuds and thumps along in the usual dynamic driver manner, but it’s not the slow and bloated low-end offered by many rivals (admittedly usually lower-priced ones). What’s more impressive than this though is how Shure has retained its core sound signature, giving an impressive level of consistency across the SE series. Primarily we’re talking about the full, warm mid-range that is one of the main attractions of a Shure set.

The sound stage is also excellent at the price, giving the impression that your music’s spread out across a wide sonic plain rather than just being crammed into your ears through a 1mm aperture – which it is. This helps to mitigate for the lack of treble sparkle compared to some alternative sets – primarily the Ultimate Ears 400 and Etymotic HF5.

There’s a decent amount high-end detail audible here and there’s no sibilance. It doesn’t excuse the SE215 fully though – so if you’re a fan if bright-sounding earphones these probably aren’t the ones for you.  The best bright earphones offer a smoother, much more insightful treble and some of these, such as the Ultimate Ears 700 and Jays q-JAYS, are available at a similar price nowadays.

However, it performs alarmingly well stacked up against the more expensive SE315 – in spite of using a different kind of speaker. The mid-range is a little more coherent in the more expensive pair, but these earphones win in the value stakes.

The Shure SE215 are the lowest-end models in Shure’s prestigious new removable-cable earphone line-up. Aside from using dynamic drivers rather than balanced armatures, they offer the same quality construction as their more expensive series siblings, with the highest-quality cable system available at the price.

That famous Shure sound is present and correct here too, with rich bass and warm, full mids. The high-end is not quite so impressive, but the same can be said of higher-end models in the series. Shure’s SE425 and SE535 soundly beat these on sound quality, but there’s no denying this is a value-packed option.