Flawed in some respects, the RMCE-BT2 is the best way to turn your high-end earphones into wireless ones

What is the Shure RMCE-BT2?

Technology has betrayed fans of high-end headphones, with the best headphones and earphones requiring a cable. However, the best smartphones – the main source of music even among much of the audiophile crowd nowadays – increasingly do not include a socket for them.

This is annoying if you have a much-loved pair of SoundMagic E10 in-ears. If you own a pair of Shure SE425, SE535 or SE846 earphones, it must be infuriating. 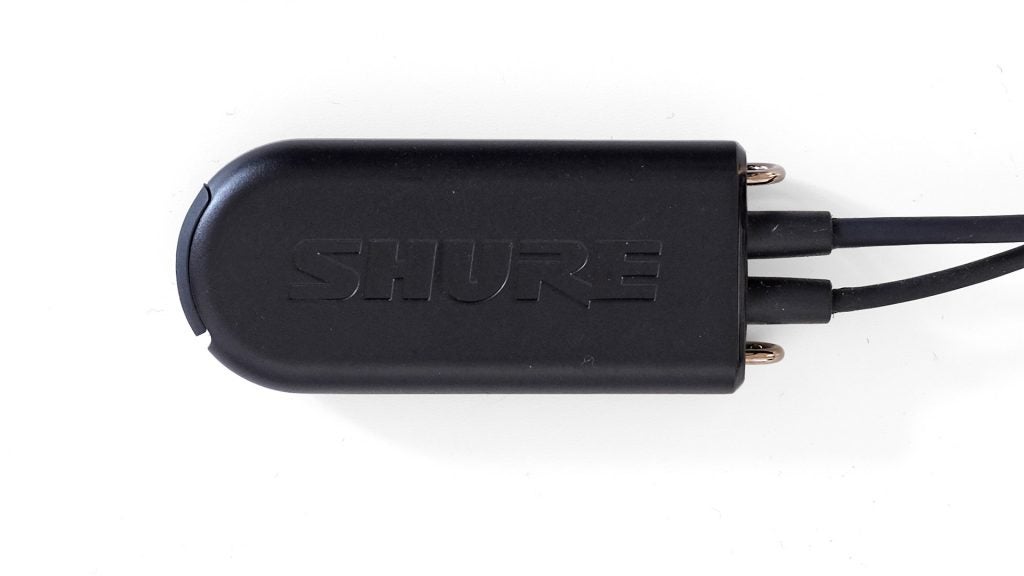 The Shure RMCE-BT2 is a cable that brings your wired headphones into the present, turning them into a Bluetooth set that’s almost indistinguishable from a pair originally designed that way.

Sound quality and wireless performance of this cable is beyond reproach. However, the price does make it a tough sell for owners of anything lesser than a set of Shure SE425, and parts of the design are a little clunky.

The Shure RMCE-BT2 is able to appear like a virtually seamless accessory to Shure earphones because of the latter’s removable earpieces. Each plugs into the cable with an MMCX connector.

Buy a pair of Shure earphones and it’s easy to think this is some kind of custom socket, but it’s actually a coaxial standard that’s been around since the 1990s. This also means you can use the Shure RMCE-BT2 with the Brainwavz B400, the Westone range and various JH Audio models, as well as all Shure earphones bar the entry-level Shure SE115. That pair has a non-removable cable. 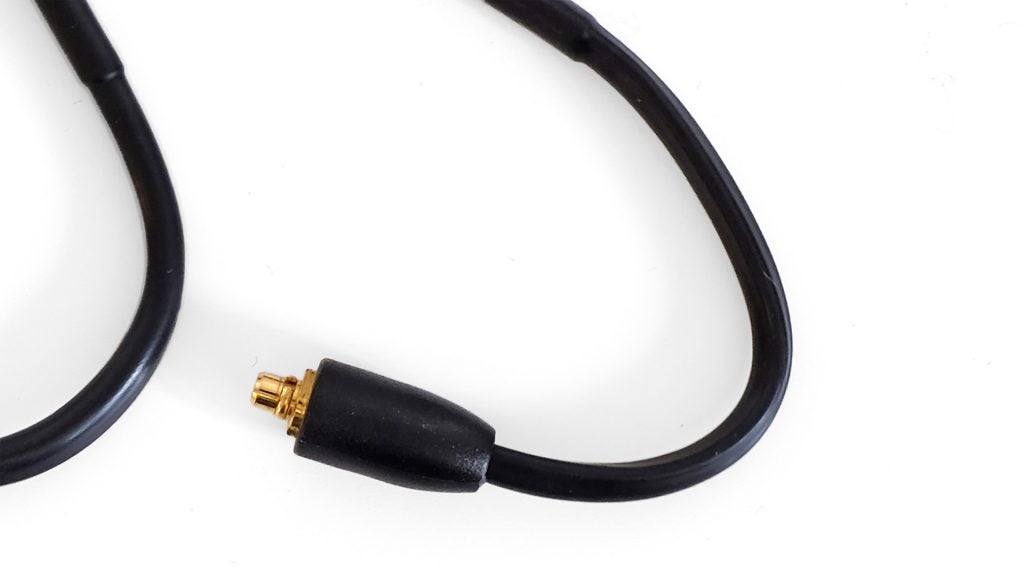 This is the second such cable that Shure has made. The RMCE-BT1 may initially seem more appealing, since it’s a pretty stripped-back cable with a little lozenge that holds the battery and Bluetooth circuitry.

Conversely, RMCE-BT2 has a much larger plastic unit that hangs down. It looks ungainly, and seems impractical when you first open the box. There’s good news, though: you can wear this cable and just leave this part hanging down. It may look a little odd, but it doesn’t noticeably weigh the set down.

Stability is also helped by Shure’s usual cabling style. Just like the standard wired cable, there are stiffer mouldable parts by the earpieces, to let you hook the wire over your ears. 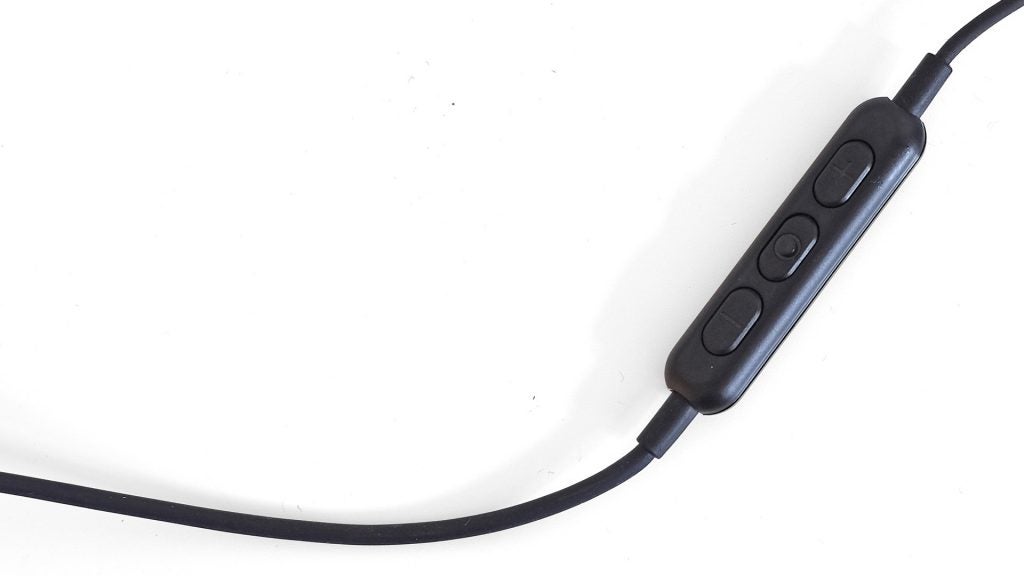 You won’t want to simply leave the RMCE-BT2 hanging if you wear Shure earphones while at the gym or out for a run, though. The bouncing box will be a distraction.

There’s a large metal clip on its rear, which lets you attach it to the front or back of your collar – although this still doesn’t make the Shure RMCE-BT2 great for use while running, however.

I wore this cable for a 5K run, and the 3-button remote housing continually knocked against my neck. The fit doesn’t work well with anything approaching a high collar, either; you’d be better opting for a V-neck for the best results. 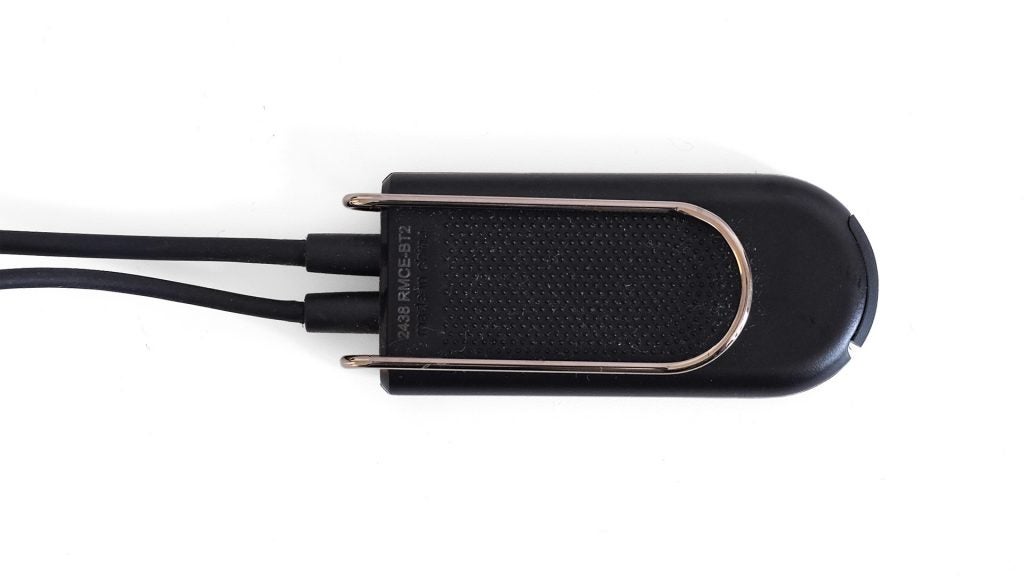 Using the RMCE-BT2 for sport is actually held back by one of its strengths. It uses a thicker, presumably higher-quality cabling than most earphones – which make its less pliable.

The RMCE-BT2 raises an obvious question: why pay £140 for this cable when there are cheaper alternatives? The Mee Audio BTX1 and FiiO RC BT are both under half the price and come from recognised audio brands. They also sport more orthodox designs.

Part of the price disparity is down to how the companies operate. Mee Audio and FiiO are Chinese entities that make low or lower-than-average cost audio gear. FiiO also makes a lot of higher-price products, but they still tend to be cheaper than the competition. It’s a good fit for the audio nerd crowd.

Shure is an American manufacturer of pro audio gear; the company doesn’t produce stuff on the cheap, and QA standards are likely higher than FiiO or Mee Audio.

The Shure RMCE-BT2 also includes better tech than either of the above rivals. First, it has a Bluetooth 5.0 chipset that supports aptX HD as well as aptX, AAC and, of course, bog-standard SBC. Earphones such as the SE535 and SE846 justify the increase in streaming quality of aptX HD over “full stream” aptX, which is already pretty great with the right source and receiver.

You also get a separate amp stage. The RMCE-BT2 doesn’t use the headphone amp built into the Bluetooth chipset, which tells us Shure has (hopefully) included what it thinks is worthy of use with the SE535 and SE846. 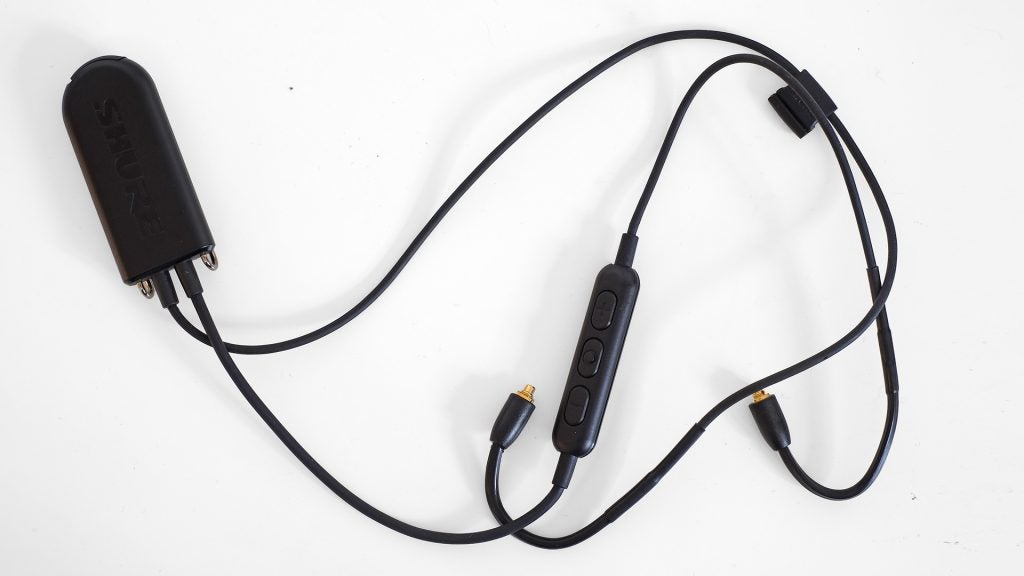 Just ensure that both your handset or player also support aptX HD, since both ends of the equation are needed to get the most out of the RMCE-BT2. For iPhone owners, it will use AAC.

Sound quality is comparable with that of the cabled version when used with decent hardware. The SE215 I was sent for comparison are close to the lower-end than I’d recommend pairing with this cable, but there was virtually no difference in sound quality between using the RMCE-BT2 and the SE215 cable.

Related: What is Bluetooth 5.0? 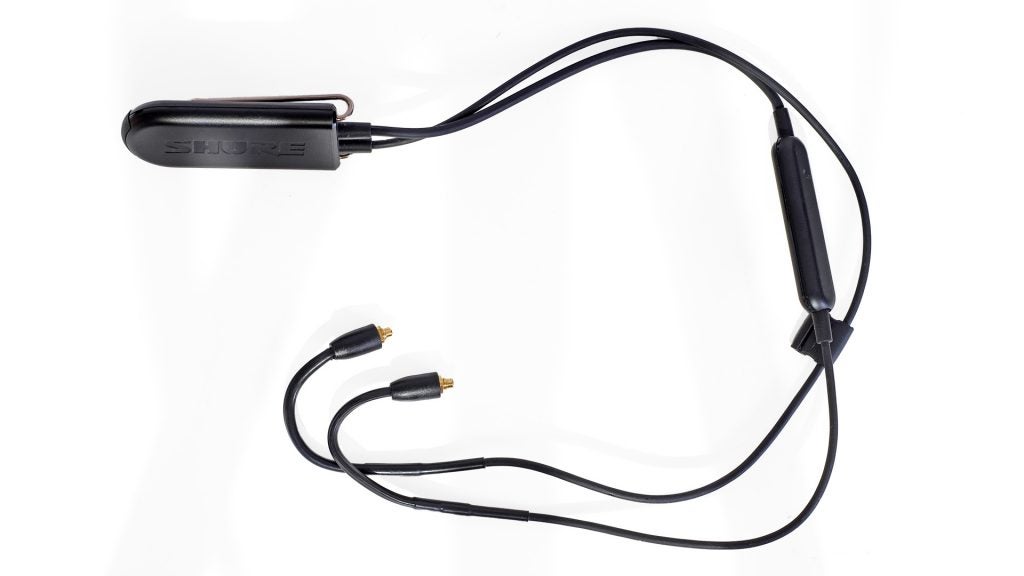 Wireless reliability, too, is excellent and on a par with the best wireless headphones. Judging by the user reviews of the original RMCE-BT1, Shure has made significant improvements with this latest unit. There were complaints about flaky signal with the older version, but I haven’t experienced any such issue here.

Shure says the RMCE-BT2 battery lasts 10 hours, and constant playback at mid-to-high volumes should get you just below that figure. However, in the real-world I would say stamina isn’t much better than just okay.

I can’t say that I’m particularly mindful about disconnecting and switching off wireless headphones once I’ve finished using them. At most I’ll switch off Bluetooth on my phone, so I can play audio through its speaker.

Most recent headphones deal with this pretty well, but the RMCE-BT2 seem to lose power a little too quickly when used for frequent short to mid-length stints. This may be a result of consuming power whilst connected to a phone, but not playing music. The separate amp could play a role, since the Bluetooth chipset is more advanced than most.

The Shure RMCE-BT2 is the best way to turn high-end earphones into wireless ones. It offers better sound tech than the competition, and Bluetooth reception is excellent too.

Sound quality is prioritised over practical concerns. If you want a pair for your work commute then you’ll be fine, but the Shure RMCE-BT2 doesn’t work so well for runners, plus the battery seems to drain far quicker than expected between sessions.

The cable is pricey too, and therefore difficult to recommend to anyone whose earphones are lower in stature than the Shure SE425.

The RMCE-BT2 is a mixed bag, then – although this review does serve as a reminder of how great the SE215 are (available for £77 online).

It’s flawed in a few respects, but the RMCE-BT2 converts your Shure earphones into a wireless pair without obvious compromises in sound or signal quality.