Why do almost all first person shooters take place in some kind of warzone? Why do zombies seemingly only ever inhabit decrepid, apocalypse hit cities? And why does Mario hang around with a giant mushroom with a face on it?

There are some things in the world of video games that we just take as being par for the course. In most cases – slightly suspect Italian plumbers befriending pieces of fungus aside – that’s because there’s a logic to them. Chances are if you’re running around with a big gun, you’re going to be taking part in some kind of conflict, and there’s a certain amount of sense to the idea that the undead would be clambering around an earth devastated by some kind of humanitarian crisis.

Still, there’s a definite argument to say that, by adhering to these tropes, developers are being somewhat unoriginal. Setting has very little impact on process in the broad scheme of things, so instead of dodging zombies in a shopping mall, why not drop them onto an alien planet? And rather than gunning down foe with bullets, why not develop a first-person shooter where your rifle spews out sugar-coated candy?

It’s a line of thought that, after playing Shooting Stars for a while, it would appear developer Noodlecake Studios could well be on board with. On the surface, Shooting Stars is a simple and rather forgiving shoot-em-up, with enemies streaming around from the top of the screen while you use your finger to shift your position and avoid their fire at the bottom. Touching the screen automatically results in you firing straight back and, as with pretty much every game in the genre, the idea is to stay out of trouble whilst simultaneously taking out all of your foe. 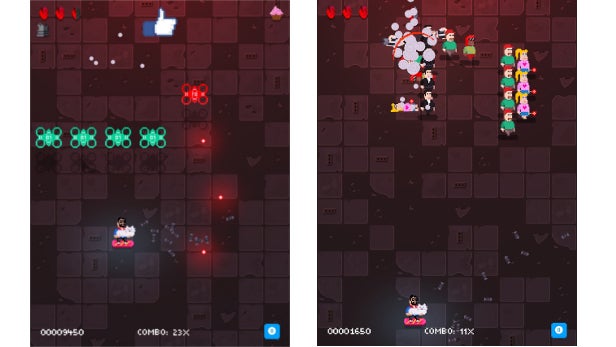 If all that sounds fairly dull and standard, then things get a little more interesting when you consider just what form that foe takes, and what you use to take them out. Rather than firing out of a gun, you play the role of an especially bearded man, tenderly holding onto a cat in his arms that fires lasers out of his eyes. Your enemies include everything from space ships, a Hulk Hogan look alike and a stream of people who resemble a particularly eager queue waiting to use the self service tills at Tesco.

All of them move around the screen and all of them are taken out with your cat, firing straight down the line and flooring pretty much everything with just a few hits. With three lives on board (although contact only removes half a life each time) and a string of bonuses released during play (special moves that recharge after a few seconds, health packs and power ups that improve your accuracy all on offer during the game’s early stages), it’s fair to say Shooting Stars is keen not to alienate the amateurs and casuals amongst its audience early on. For hardcore shoot-em-up fans, this a game that’s going to feel a little tame, at least to begin with.

Indeed, the efforts to appeal to a more mainstream audience can also be seen in the game’s daily run, which charges you with lasting as long as you can in order to top a global leaderboard. It’s a typical hook designed to keep you coming back time and again and, if you like shoot-em-ups that give you a little leeway rather than cutting you down in a few seconds, Shooting Stars has much merit. The bizarre staging (as well as constant references to internet memes) also gives Noodlecake Studios’ effort an added edge that few of its space-laden rivals would ever attempt to mimic. 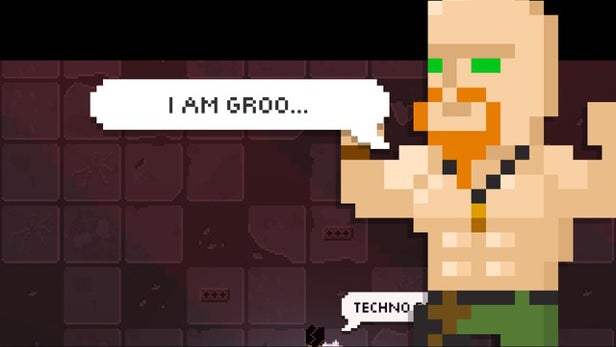 But is it actually any good? In truth, if you strip back the jokes, the pixel-art style and all of the game’s other assorted oddities, there’s nothing much within Shooting Stars that makes it any better or worse than any other shoot-em-up and, if anything, its key selling point is that someone like me – who typically dies within seconds when taking on a typical shooter – can play quite comfortably without fearing everything is about to end.

Nevertheless, there’s a genuine feeling throughout that any sense of freshness stems not from a new approach to play, but rather a different take on how and where you set your games, with Shooting Stars throwing a bunch of different references into a pot and giving it a good stir before building a shoot-em-up out of what results. If you’re after a chuckle and a shoot-em-up experience that doesn’t feel like a pot about to boil over from start to finish, Shooting Stars may just hit the spot.

Verdict
Fun and easy to pick up, Shooting Stars is not your average shoot-em-up – not only because of its intentionally off-the-wall setting, but also because it gives newcomers a gentle ride. That’s something of a welcome break if you typically find genre stalwarts a little too hard to get into, but otherwise, it’s fair to say most of the originality has gone into the game’s setting, rather than its structure.