Available on PS4, Xbox One and PC (reviewed)
Since the dawn of Mario, developers have gone to great lengths to tweak the mechanics of platformers. The portly plumber is still the gold standard in this particular genre, but the likes of Rayman, Sonic, Braid, Fez and more have added interesting and enjoyable tweaks to the its timed-jump basics. Shiflings, however, is probably the first game of this type to add flatulence as a gaming mechanic.

Shiftlings follows the fortunes of a pair of alien janitors on an obnoxious reality TV show as they trundle around a series of jobs collecting trinkets and fixing problems. As the game begins, the pair come across a soft drink and one of them downs it in one swig. This causes one of them to get quite a bit gassy and he accidentally – and permanently – inflates his space suit. Since the pair are tethered together by an air hose, they’re able to pass this wind back and forth between them. As one inflates, the other deflates and this makes from some interesting navigation around the various environments they end up tooling about in. 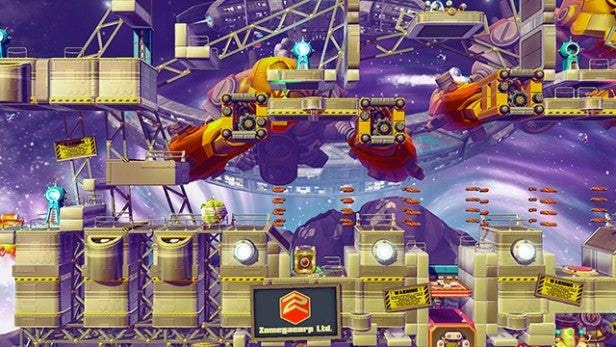 The tasks they face – such as closing valves and tinkering with consoles – don’t really require much on the part of the player controlling them. Instead, the player’s main task is getting the two janitors between points on a map. To this end, they guide the parping duo through a series of maps filled with platforms, ramps, levers and moving parts and they’ll also need to employ their grey matter, because a lot of the routes through Shiflings aren’t as straight-forward as they initially seem.

First up, there’s that pesky air hose that connects the two janitors. As the pair of them wander through the different maps, the air hose has the tendency to both block and aid them in their progression. Bounce the smaller of the two up to a platform and the oversized dolt that remains on the ground (unable to jump more than two inches in the air) acts as both an anchor and something of an obstacle.

If you dangle the shorter of the two off a ledge and then inflate his suit he’ll act as a counterweight, pulling his now miniscule companion over the edge with him. If one of the janitors is on a higher ledge, but the air hose is roped around it in a way that stops the pair of them from moving forward, the player has to loop it over the edge through a redistribution of  flatulence. The trick here is to think of the pair of them as two ends of a giant slinky spring, that can only move forward if you tip it end over end. The player can also use the larger of the two janitors as a trampoline for his short mate, who can bounce off his suit and reach ledges in harder to reach places. 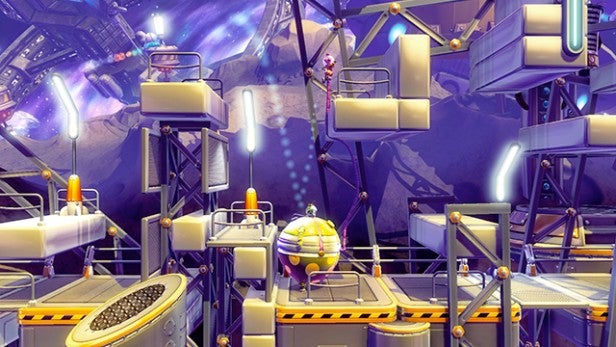 While all this sounds rather fun – and it is to begin with – Shiftlings soon turns into something of a slog. The way a lot of the levels are constructed dictate a lot of back and forth between the two fart-blossoms and a lot of retreading the same ground. Mistime a jump and you could be looking at a thirty second window in which you’ll need to retrace your steps in order to set the janitors up for the same jump and reach your next objective. While that time period doesn’t sound like a long time, in a platform game it’s an interminable length and may cause more than a couple of rage-quits.

This isn’t helped very much by the fact that the game is incredibly fiddly to play solo – particularly if you’re on a PC. The control set-up doesn’t feel all that intuitive and it’s all too easy for players to stunt their forward progression by hitting the wrong key (we lost count of the times we had to reset a series of jumps after we selected the ‘inflate’ function rather than the ‘jump’). In co-op, this is a little bit easier, although it requires both players to think a little laterally and their communication skills had better be up to scratch. Seriously, taking your eye off the ball in Shiftlings will irk your partner about as much as it would if you were actively abusing them in the co-op mode in Portal 2.

Shiftlings, it has to be said, is beautifully presented. The look and feel of the game is very reminiscent of a Pixar animated feature or even Ratchet and Clank. The characters in it have more personality than your usual cutesy cyphers as well. The host of the show the two janitors are in has a steady stream of fart gags, although these run out of gas pretty quickly.

Verdict
Shiftlings, then, is a pleasant, slightly challenging diversion with the tendency to be a tad annoying at times. It’s never going to give the likes of Mario, Rayman or even Kirby a run for their money, but if you’re in the market for a colourful platformer with an interesting mechanic and you feel the sound of flatulence never gets old, you may be right at home here. The rest of you may want to wait until the price comes down.