If you haven’t heard of Sharp’s XV-Z17000, we wouldn’t be surprised. Nor is there any point (for now, at least) googling the product name to find out where it’s available in the UK. For Sharp is currently treating its new 3D projector as a ‘limited distribution’ product, only available direct via the brand’s UK customer service department on 0800 262 958.

The background to this apparently odd distribution model is that Sharp actually pulled out of the UK projector market a few years ago. But such is the interest in all things 3D – especially where king-sized 3D is concerned – that the brand has decided to dip its toe gingerly back into UK projection waters with the Z17000.  And as we’ll discover, we’re rather pleased it has.

Whatever else we might end up thinking about Sharp’s XV-Z17000 3D projector, though, it sure doesn’t look like something that will cost you four grand. Its shaping is of the classic ‘rectangular brick’ variety, and while its finish is glossy and black, it also feels plasticky and low-rent – a feeling underlined by the projector’s relative lightness compared with other recent 3D projectors like the JVC X3 and the Sony HW30ES.

Then there’s the lens, which is a disappointingly small affair housed within a flimsy looking lens ‘tube’, with simple zoom and focus rings wrapped around it. The rather measly x1.15 zoom isn’t anything to write home about, either. Indeed, it could make the Z17000 a non-starter for people with very large rooms given that Sharp has opted to equip its projector with a very short-throw lens. 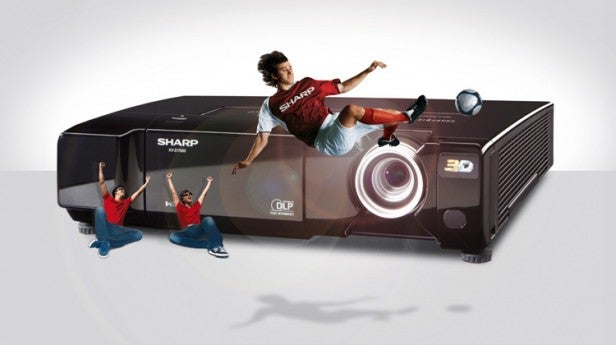 Worse than the limited lens zoom, though, is the lack of true optical image shifting. While we might – just! – be able to forgive this on a sub-£1k budget projector, not including at the very least  vertical shifting on a £4k home cinema projector is sinful. After all, the result is that many people will be forced to resort to using the Z17000’s keystone correction system to get the edges of their picture straight. And the moment you start manipulating an image with keystone correction you’re effectively digitally distorting it, thus removing the pixel for pixel perfection that’s the whole purpose of marrying an HD source to a full HD display pixel count such as that carried by the Z17000.

Sharp actually provides more keystone adjustments than usual, including Sphere and Rotation adjustments as well as the usual standard Keystone ‘trapezoid’ setting. But whoever decided that developing extra keystone settings would be better than providing manual image shifting should be shot. Or at least told off a bit…

So far, as indicated earlier, the Z17000 hasn’t set the right tone at all for a projector that costs £4k and is well-specced enough to boast 3D playback. But there is one bit of surprisingly good news about the Z17000’s chassis, namely that the necessary 3D sync transmitter is built into the projector, rather than being an external gizmo you need to accommodate separately.

Its connections aren’t bad either, including as they do two v1.4 HDMIs, a D-Sub PC port, and an RS-232 port for integrating the projector into a wider connected AV system. It’s a pity there are no 12V trigger outputs, but this isn’t a disastrous point by any means.

Moving on to the Z17000’s set up menus, they’re kind of OK. They’re crammed into a bizarrely small area of the screen, which makes them trickier to read and navigate than they needed to be, but they’re mostly well stocked with calibration aids.

Highlights include a healthy series of diverse and usually quite astute picture presets, two iris adjustments (a manual ‘high or low brightness’ one, and an on/off auto one), various noise reduction filters, and two separate colour management facilities. These aren’t very standard in their configuration, though, and to us seemed to make the colour calibration process more complicated and time consuming than it needs to be.

Before checking out the Z17000’s performance, we should quickly note that it uses a DLP engine to deliver a claimed brightness of 1600 Lumens and a claimed contrast ratio of 40,000:1. The brightness figure is impressive, while the contrast one looks a little ‘meh’ by today’s standards.

Combine these specs with the issues we have with the Z17000‘s build quality/set up tools, and it’s fair to say we didn’t hold out any particularly great hopes for the Z17000 when settling down to watch it in action. However, within mere seconds of firing up Monsters Vs Aliens on 3D Blu-ray, our ‘meh’ had turned to ‘wow’. 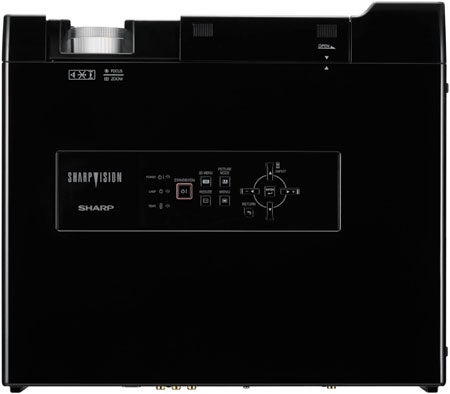 The single biggest reason for this is the near total absence of crosstalk from the Z17000’s 3D images. Even during the classically tough Golden Gate Bridge sequence of MvA we failed to detect even the faintest hint of a halo, ghostly echo or ‘dark shadow’, even around the bridge’s most distant struts. The Z17000 in this respect offers the cleanest 3D image we’ve seen aside from Sim2’s Lumis 3D-S – which costs £30,000.

Not suffering with any crosstalk makes it much easier to appreciate the depth of the 3D image, as well as the truly HD levels of detail and sharpness delivered by the active 3D format. This all comes as nothing short of a revelation at the Z17000’s price point.

We didn’t detect even a hint of flicker from the glasses either, so long as we watched in a darkened room. It’s worth adding, moreover, that the glasses are both comfortable and good at stopping extraneous objects or light from impinging on your 3D view.

3D images look quite punchy and bright as well, provided you use the projector’s Dynamic preset, and colours are reasonably vibrant and subtle when it comes to reproducing tonal blends and shifts.

However, one or two colour tones – especially greens – look slightly off-key in 3D mode, making us wish the Z17000 copied Sony’s recently reviewed HW30ES 3D projector in offering dedicated 3D presets, where you can store settings calibrated to compensate for the colour shifting influence of the 3D glasses.

Another issue with the Z17000’s mostly outstanding and unusually unfatiguing 3D images is a degree of judder where fast motion is concerned, making us think again of the Sony HW30ES, with its unusually effective (and crucially not too heavy handed) motion processing options.

It’s worth noting, too, that the Z17000 doesn’t offer 2D to 3D conversion, and runs a little noisily when using the Dynamic picture preset that to our mind best suits 3D viewing. But the Z17000 is hardly alone in this latter respect, and actually runs remarkably quietly when you’re watching 2D footage using a tweaked version of one of the Movie presets.

The Z17000 is not, alas, as stand-out great with 2D as it is with 3D. The main reason for this is a slight lack of black level depth versus rivals like JVC’s X3 and, to a lesser extent, the Sony HW30ES.

Somewhat hidden by the dimming effect of your glasses during 3D viewing, the slightly limited black levels lead to dark scenes looking slightly grey and a little short of shadow detail in very dark areas. You can reduce the greyness by tinkering with the projector’s brightness and contrast, but only at the cost of yet more shadow detail and general image ‘punch’.

In most other ways, though, the Z17000’s 2D pictures are good. Colours look natural and subtle, motion is more ably handled than it is in 3D mode, and most strikingly of all, the exceptional detailing noted during HD 3D viewing is also apparent with normal HD material, allowing the Z17000 to do that usually high-end-only trick of revealing fine details in some HD sources that we hadn’t spotted before.

Shifting the manual iris to the High Contrast setting best suited to 2D movies does, it must be said, remove quite a bit of dynamism from the picture. But this doesn’t stop images looking cinematic by any means – unless you’re trying to use the projector in an environment containing ambient light (which we strongly suggest you don’t!).

One final feather in the Z17000’s cap is that it suffers scarcely at all with DLP’s dreaded ‘rainbow effect’ artifacts, where stripes of pure colour appear over bright parts of the image or in your peripheral vision.

Verdict
The mid-range space of the projector market is getting seriously interesting right now. In their different ways JVC’s X3, Sony’s HW30ES and now Sharp’s Z17000 projectors all offer some serious quality for your money.

In the Z17000’s case, that quality is particularly evident in 3D mode, where the total absence of crosstalk is a revelation, leaving 3D looking cleaner and less tiring than it does on either of its key rivals.

The Z17000 isn’t quite as good as the other two models – especially the JVC – when it comes to 2D playback, though, predominantly due to its slight black level limitations. And since most of your viewing time will likely be spent with 2D rather than 3D material – and also because the Z17000 feels a bit too expensive – we’ve ended up only being able to give the Z17000 a score of eight overall. But if you want the best 3D projection performance you can currently buy without spending megabucks on something like the Sim2 Lumis 3D-S, then the Z17000 is your man.