The TU-T2HR32 is the PVR version of the TU-T2 Freeview HD receiver we reviewed back in June. As such, it looks to bring you all the same free HD telly goodness but with the added bonus of being able to record those hi-def programmes and watch them whenever you like. In all honesty, we weren’t particularly enamoured by the TU-T2 due to its lack of features and below-par pictures, but here’s hoping the addition of hard-disk recording will see it go up in our estimation.

From the outside, there’s virtually no difference between the two units, except that the PVR’s casing is slightly larger to accommodate those extra electronics. The impenetrable black finish and panel of blue lights on the front panel makes it seem suitably jazzy and modern, plus there are no buttons on the front to clutter it up. All in all a good-looking design, although it’s not in the same league as the TVonics DTR-HD500.

Rear panel connectivity is comprehensive. Alongside the all-important HDMI output are two Scart outputs, which allow you to connect to a TV and recorder simultaneously (if you’re still not on board with the whole HDMI thing). Surprisingly you get both optical and coaxial digital audio outputs, which is useful if your receiver only sports one or the other, while the Ethernet port makes it ready for future IPTV services. Disappointingly the USB port on the back is only used for making software updates but not for digital media playback, handing rival PVRs from TVonics and Humax a slight advantage in that respect. Completing the line-up are RS-232 and aerial in/loopthrough ports.

On the inside, the TU-T2HR32 features a 320GB hard disk, some 180GB less capacious than Humax, Philips and TVonics’ recorders – and at around the same price (in some cases higher) that hardly constitutes great value. You can still squeeze around 80 hours of HD recordings onto that though, which you’d have to be a serious couch potato to fill up quickly. 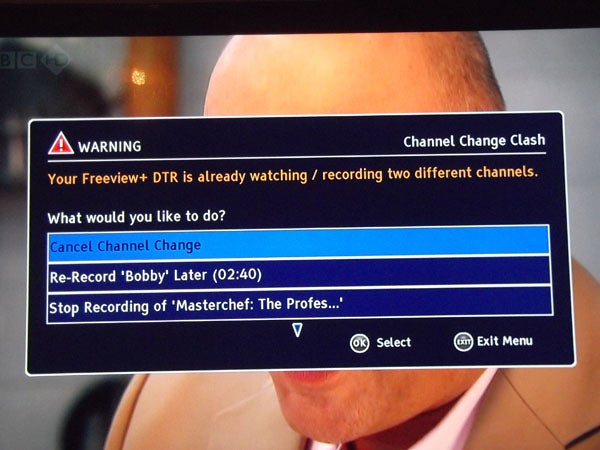 The presence of two DVB-T2 tuners allows you to record one channel while watching another, but unlike the Philips HDT8520 when recording two channels you can’t watch a third. Try to do so and a dialogue box spells out the solutions in clear, practical English – cancel the channel change, stop either of the recordings or watch one of them from the start. These friendly, well-worded onscreen descriptions permeate the entire operating system and make the unit a real joy to use, particularly for PVR newcomers.

The look of the onscreen menus is right on the money too. Sharp has created a colourful, engaging main menu, which lists the options on the left and plays live TV in a box on the right. Judicious use of icons and modern, legible fonts keeps it feeling fresh yet consistently logical. 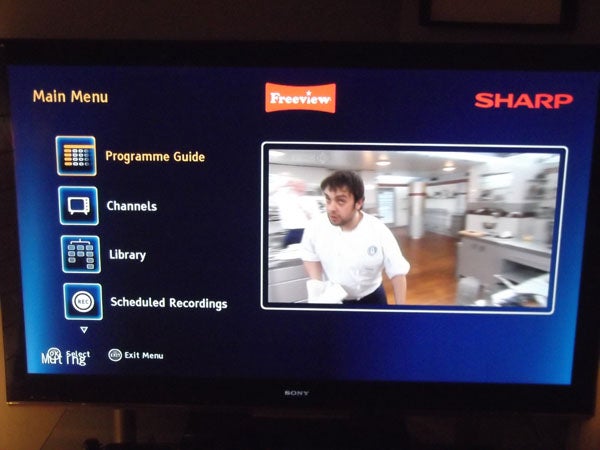 Skip down to settings and the main/submenu structure is as clear as they come, allowing you to explore the comprehensive range of tweaks with zero confusion – and there’s absolutely no sluggishness to report either. 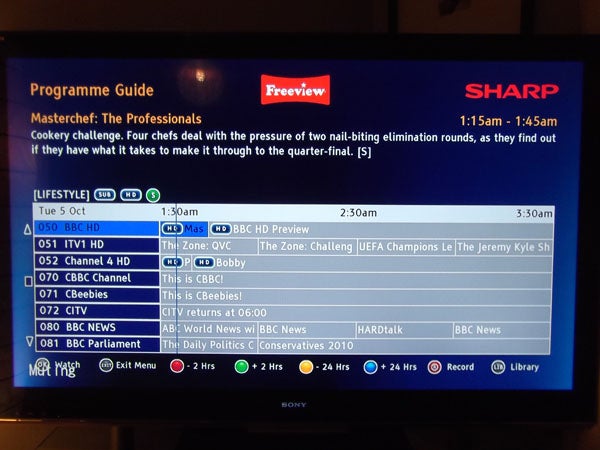 The eight-day EPG is also a pleasure to use. The programme grid lists eight channels moving along in a horizontal timeline fashion, with a bold blue line representing the current broadcast position. SD broadcasts also available in HD are displayed with a little ‘HD’ logo inside the block – hit record while highlighting one of these and the box asks which version you’d like to record, plus whether you’d like to record the entire series or not. 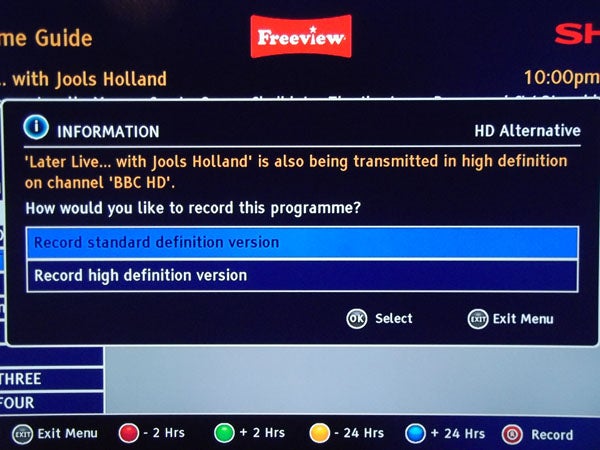 Along the bottom, a row of colour-coded buttons provides plenty of navigational help. Our only real gripe – and it is a small one – is that you can’t continue watching live TV as you browse.


This classy EPG is backed up by an equally classy recording library, which does play live TV in a box at the top and lists your recordings below. 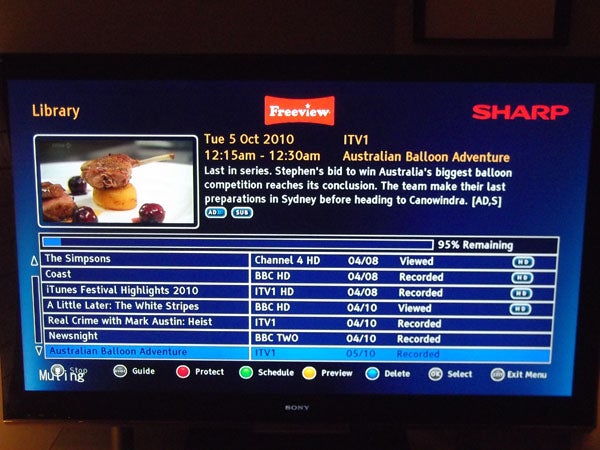 Its bold layout and the comprehensive information about each recording are superb and there’s lots you can do – hit the yellow key to preview a recording, or hit the green key to bring up a list of your scheduled recordings and activate or remove series link retrospectively. Select a recording to play and you can restart or resume from where you left off. All that’s missing is even the most basic editing functionality, but that’s not crucial. 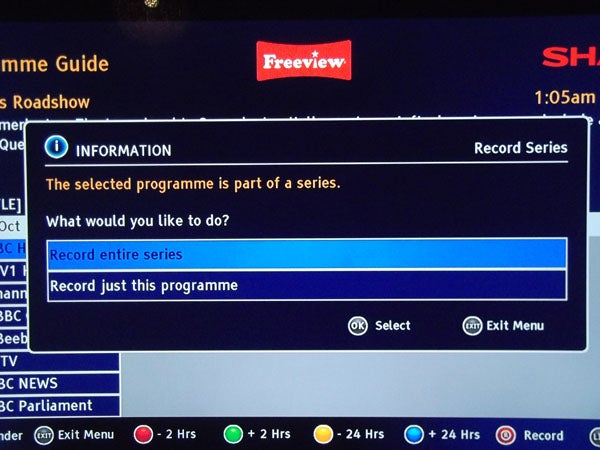 Other neat features are found elsewhere. The Trailer Booking function lets you schedule recordings from programme trailers simply by hitting the green button when the icon pops up in the corner of the screen. Built-in recommendation technology allows broadcasters to ‘push’ recording suggestions to your box based on what you’ve already recorded. 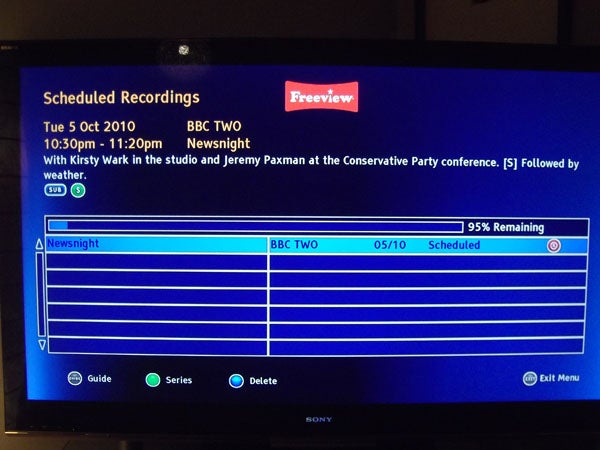 The handy ‘now and next’ onscreen information banners let you call up a synopsis of the current or subsequent programme, as well as the other key details about that broadcast. 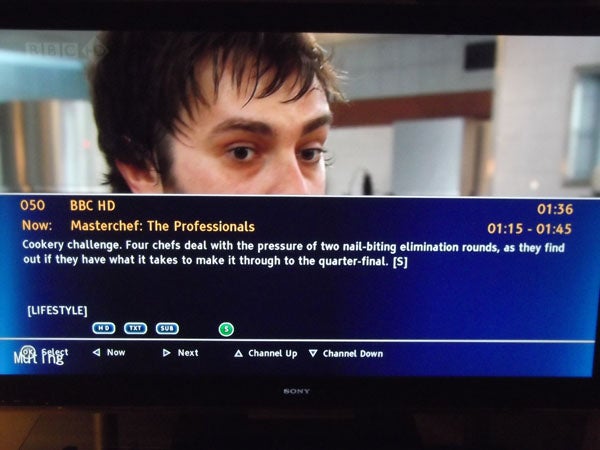 You can move up and down the channels, but the unit will only display now and next information for each one, which is a pity – some boxes let you browse days’ worth of programmes this way. To top it all off, you can also pause and rewind live TV, the importance of which cannot be underestimated.

To begin with we had to launch the First Time Installation to retune the channels, but this process took up very little of our precious time. When it completed, a convenient dialogue box confirmed how many channels had been found, although strangely it only found 55 while others normally find over 60. 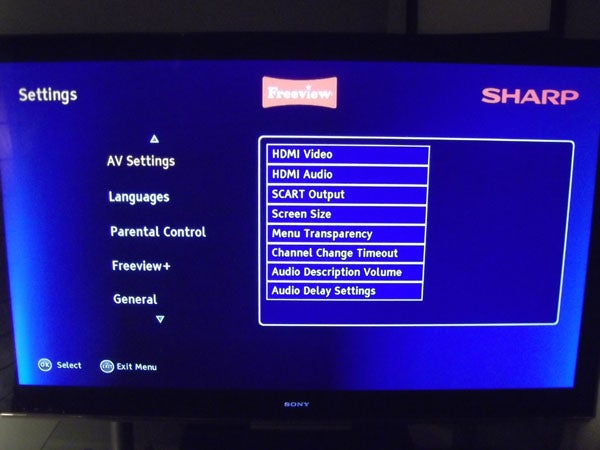 Don’t forget that alongside all this new fangled hi-def picture wizardry and recording flexibility you also get old-school digital terrestrial tricks like MHEG interactivity and digital text, which load up with astonishing speed. Elsewhere the box is capable of upscaling programmes to 1080p, and that goes for HD broadcasts too. Dolby Digital Plus is also supported but it’ll take a firmware update to allow the unit to convert Freeview HD’s HE AAC broadcasts to Dolby Digital. 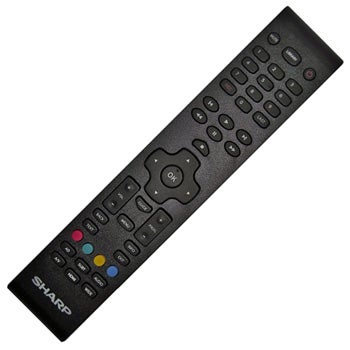 Before we launch into picture quality, a word on the remote – visually it’s very nice, with its coffee table friendly curves at either end, but it does feel a bit cheap. The button layout and labelling are generally sensible (particularly when it comes to the frequently used menu and playback controls) and they press down with a satisfying click, but it was an odd decision to put the Library button way up the top. 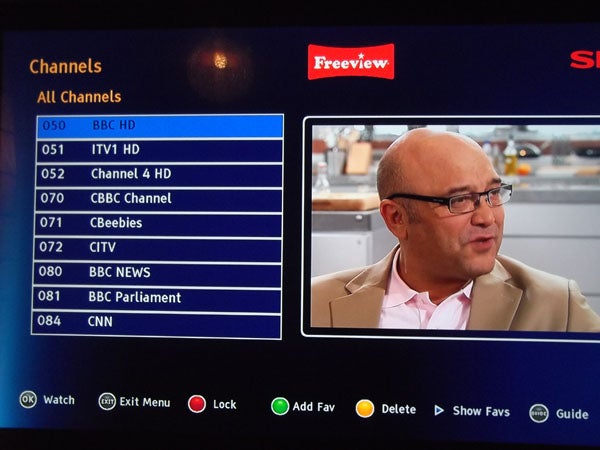 A session watching programmes like ”Damages” on BBC One and ”Coronation Street” on ITV1 reveals that the TU-T2HR32 is almost as adept at upscaling standard definition channels as it is at displaying native hi-def ones. Although there is noise in the picture, and a distinct gauziness on those low-rent late-night bingo broadcasts, it’s nowhere near as distracting as one or two other receivers and recorders we’ve encountered. Warm colours radiate from the screen, detail looks reasonably sharp and movement is silky smooth. There’s only the faintest trace of stepping on diagonal lines, no more than you’d normally expect.

With high-definition channels, however, the Sharp certainly steps up a gear. The ”One Show” on BBC HD is an eye-popping carnival of colour and razor-sharp detail, giving the image levels of depth that’ll draw you into even the most mundane discussion about debt collectors or indigenous snakes. This all counts in the Sharp’s favour when it comes to recording, as the images are captured in exactly the same crystal clear quality. We can’t fault its sound quality either – stereo output is clean, dynamic and well balanced.


Overall, the TU-T2HR32 really is hard to fault. Yes, you can point to the lack of digital media support via USB or the comparatively measly 320GB hard disk – things that ultimately cost the Sharp ‘must buy’ status – but when it comes to fundamental Freeview HD functionality it does a fantastic job. We love the clean picture quality and flawless recordings, but it’s the attractive, helpful onscreen design, fast operating speed and plentiful connections that really mark this PVR out as a serious contender for your cash.