The Sharp R861SLM is a combi microwave, grill and convection oven sporting a modern design.

It looks pricier than it is, thanks to a pull-down door and attractive finish with stainless steel highlights. Controls are intuitive and it cooks fairly evenly, but the appliance can on occasion vibrate noisily. 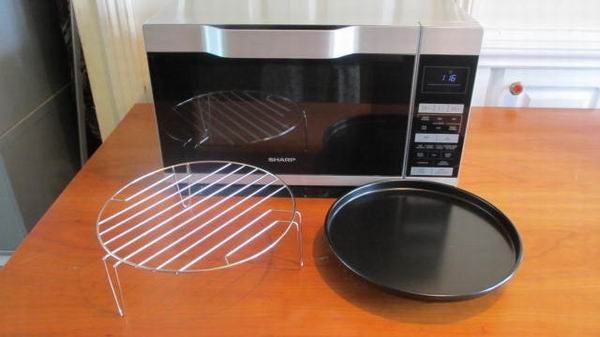 The Sharp looks modern thanks to its oven-style pull-down door and flatbed design; there’s no turntable. This results in significantly more cooking space, which is great so long as the appliance does a good job of cooking food evenly.

I wasn’t a fan of the flatbed’s look, though: it’s white, with a giant Sharp logo on it. On the outside, however, the brushed stainless steel and black glass finish is attractive, and makes for an appliance that appears far more expensive than it is. Thankfully, it’s pristine looks are easily maintained, since it isn’t a magnet for fingerprints.

The Sharp appliance is deeper than most, which means there’s less usable worktop space in front of it once it’s in position on the worktop. To its credit, it has ridiculously effective non-slip feet that work similarly to suction pads. Once in place, this appliance is difficult to move; it will be well and truly attached to whichever surface you place it on.

The buttons and display can be found on the right-hand side, as is the convention, and they’re intuitive enough that you needn’t look at the instructions. You get all the standard features: buttons to select the time in 10-minute, one-minute and 10-second increments; defrost by weight or time; plus the ability to select cooking method by microwave, grill, oven or a combination of the microwave with one of the others. There’s also a clock, kitchen timer, delay timer and child-safety lock. 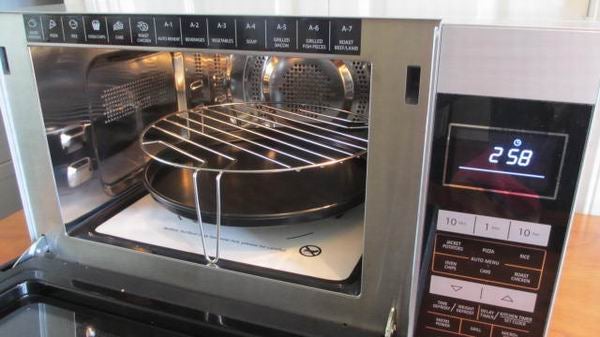 There are six auto menu functions at the press of a button: jacket potato, pizza, rice, oven chips, cake and roast chicken. But there are a further seven functions (auto reheat, beverages, vegetables, soup, grilled bacon, grilled fish pieces, roast beef/lamb) that you can select by pushing the up and down buttons. When the door of the microwave is open, there’s a handy reminder across the top that tells you what these functions are.

However, the instructions aren’t so great at telling you when to use the supplied wire rack and baking tray. The rack is presumably for grilling and the tray for the convection oven. And I’d assume that since both are metal, they shouldn’t be used in combination with the microwave.

The tray fits under – but, annoyingly, not on top of – the rack, which is handy for storage purposes. However, there’s no guidance on whether you’re supposed to use the two together.

Also baffling is that both the rack and tray are circular. The whole point of a flatbed design is for its larger cooking space, so surely it should be possible to grill enough cheese on toast to feed the family. You could fit twice as much in the Sharp’s grill if the rack filled the space available. 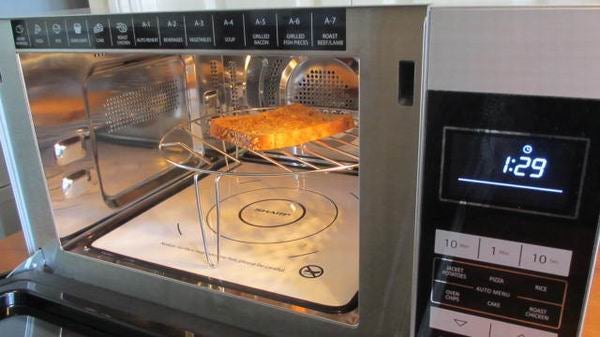 I liked the Sharp’s pull-down door and found the controls intuitive and straightforward enough to use.

I started testing with some simple defrosting. A 100g defrost should take three minutes according to the weight defrost menu, which appeared to be a long time. But since the pitta bread weighed only 40g, I checked it after 45 seconds to find that it was ready. It was initially moist, but after leaving it to cool for a minute the texture was good.

The grill is fast enough and, most importantly, cooks fairly evenly. I grilled a slice of bread on one side for three minutes – and it was perfect – then flipped it over for a further four minutes to make a good slice of cheese on toast. The top was more cooked at the back than the front, however, so in an ideal world you’d turn it around mid-grilling.

The precise cooking and timer offered by microwave grills makes them perfect for this kind of job, where in a regular grill you’d be likely to forget and overcook or burn the toast.

Using the convection oven to cook a slice of frozen pizza on the supplied baking tray was interesting. The weight options for auto cooking pizza are 150, 300 and 450g, with 18-, 19- and 20-minute cooking times respectively. To be fair. though, this includes the time it takes for the oven to warm up.

We fired it up for the 150g programme to cook a 100g slice of frozen pizza. The oven is fairly loud as a result of its fan, but what struck more was the fact that at time it vibrated so much that it made the baking tray wobble noisily on the flatbed. This didn’t happen on every occasion, though. 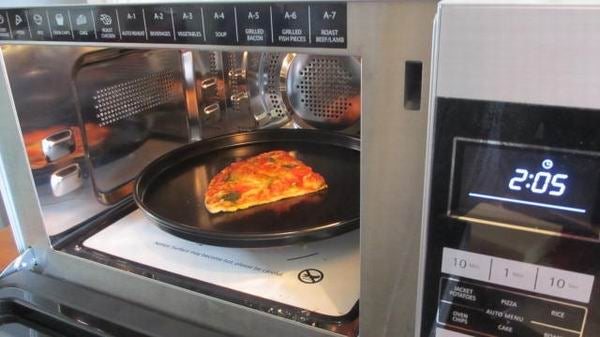 However, cooking was even, you couldn’t tell which way round the pizza had been sitting. The top was nicely browned, the edges crisp – but not too crisp – and on the underside there was no soggy bottom in sight.

Next I cooked a large (320g) jacket potato. The auto menu decided six minutes would be ample for a single spud, but I suspected it would take longer. Much like the noisy baking tray, the Sharp visibly vibrated some of the time, so much so that you could see the potato rolling a bit from side to side. 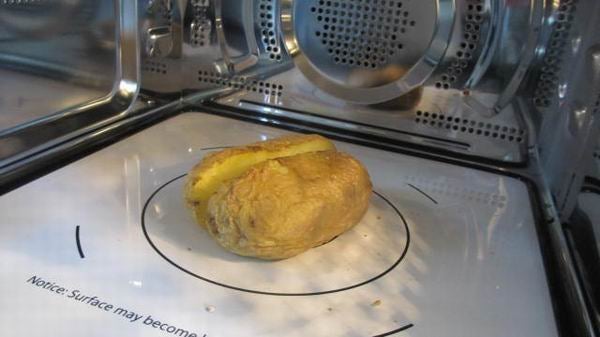 As expected, the potato wasn’t cooked right through once the six minutes had elapsed, so I had to pop it back in for a bit more time. The results were edible, but unspectacular. As is often the case with microwaved potatoes, the underside was overcooked.

Finally, cleaning the appliance was a breeze, thanks to the glass flatbed. If you’d suffered a culinary explosion then cleaning would be more fiddly as result of the exposed grill element at the top and the ventilation holes in the rear and sides. But still, on a day-to-day basis the Sharp R861SLM is easier to clean than a microwave with a turntable. 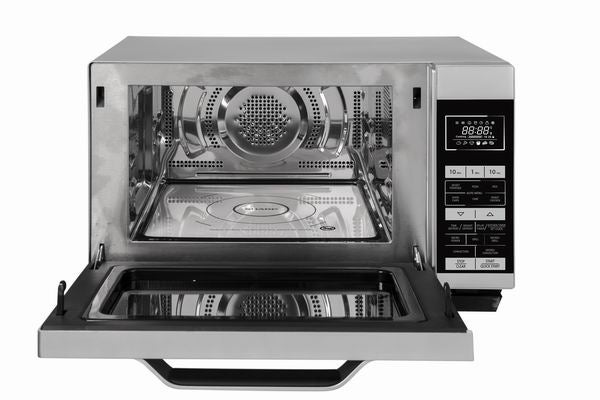 Should I buy the Sharp R861SLM?

You get plenty for your money with the Sharp, plus it cooks fairly evenly and it looks attractive. But the vibration and noise proved annoying.

If your budget will stretch a little further to a combi then opt for the Panasonic NN-DF386. If you only need a microwave then the compact Beko MOF 20110 is also worth a look.

This affordable combi is worthy of your consideration, and its premium looks are a bonus.