Having tried its hand at full HD with some success with the XD1E models, Sharp is now having its first stab at another en vogue picture-boosting technology: 100Hz.

As you may recall from reviews we’ve carried of other TVs carrying this technology, such as Toshiba’s WLT68 models and Panasonic’s new LXD70 LCDs, 100Hz uses processing to double the picture’s refresh rate. Originally designed to counter flicker with old CRT technology, it’s now used in the LCD world in a bid to tackle problems with motion blur, where difficulties in making LCD pixels cycle fast enough can cause moving objects to lose resolution as they pass across the screen.


So far, we’re pleased to say, we’ve found the 100Hz approach to work pretty well, making moving objects look clearer without throwing up the sort of processing side effects that used to plague some CRT 100Hz incarnations. 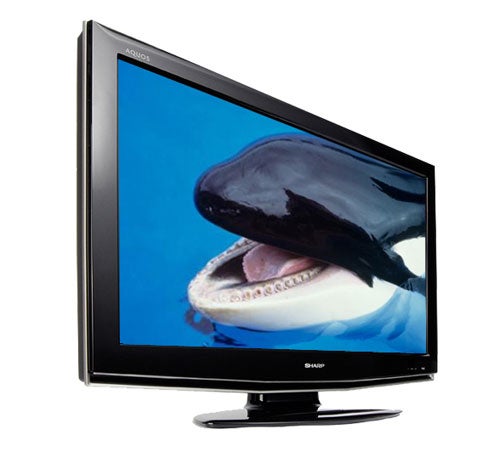 So with motion blur being one of the few issues we had with Sharp’s XD1E Full HD TVs, we have high hopes that the addition of 100Hz to the 32in LC32RD2E will make it truly special.


As with the XD1E range, the 32RD2E starts well by ditching Sharp’s old Titanium finish – which was, truth be told, starting to look a little dull – in favour of a glistening high-gloss black finish wrapped around a tasteful combination of curves and angles, all offset by some sweet silver trim.


Connectivity is mostly good with one niggly shortcoming. In the good column sits the provision of twin HDMIs, Scarts, a D-Sub PC port and support for a digital tuner, with the niggle being the lack of any dedicated component video input. You can get component video signals into the TV via a provided adaptor and the D-Sub port (the set couldn’t call itself HD Ready if it didn’t support component feeds at all), but this approach does, of course, mean you can’t leave component video and PC sources connected simultaneously.

The 32RD2E’s native resolution is 1,366 x 768 rather than the full HD 1,920 x 1,080 count of Sharp’s XD1E models – a shame, perhaps, but hardly a surprise on a TV that’s only 32in across. It’s also possible that applying 100Hz to a full HD pixel count throws up some tricky issues when it comes to the level of processing power required. But that’s really just speculation on our part.


One other key claimed spec that’s certainly far from disappointing is a contrast ratio of 10,000:1. This, if memory serves us right, is the highest such figure we’ve ever seen on an LCD TV, and raises high hopes that the 32RD2E will not be bothered by LCD’s traditional black level issues.


Naturally this contrast ratio comes with a kind of catch, in that it’s achieved via a dynamic backlight system that reduces the screen’s brightness during dark scenes to produce a deeper black level. But similar systems are almost universally employed by good LCD TVs now, so provided it’s handled well, its positives should comfortably outweigh its negatives. 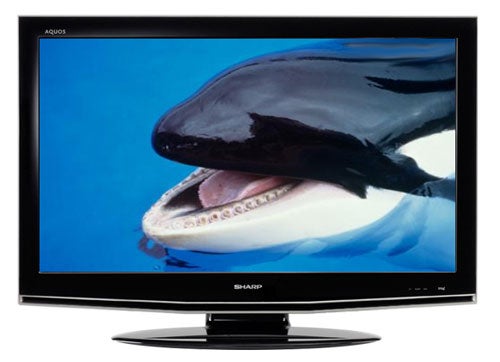 Other interesting features of the 32RD2E are pretty limited. A film mode is on hand to tweak the set’s progressive scanning so that movie sources look smoother, and there’s a black level booster option to further up the black level performance. But everything else is pretty much standard.


Settling down to watch the 32RD2E’s 100Hz system in action produces some truly startling results – but not always in a good way.


The good and bad things about the 32RD2E’s 100Hz system both stem from the fact that it is easily the most powerful such system we’ve seen. For instance, as Bond strolls around the casino in the Blu-ray of Casino Royale, he suffers practically no loss of resolution whatsoever. Every last one of Daniel Craig’s craggy features remains perfectly clear and sharp. Seriously: moving objects look sharper than we’ve ever seen them on an LCD TV before.

While this should be great news, though, the effect is taken too far. For actually on the 32RD2E moving objects seem quite preternaturally sharp and fluid, standing out from backgrounds in a way that makes the picture look distractingly odd. In fact, the potency of Sharp’s 100Hz effect actually made us feel slightly queasy over time – a sensation we really only want to feel when watching a something like Hostel or Wolf Creek, not an episode of the Tellytubbies!


There’s another problem, too, that reinforces the sense that moving objects are somehow divorced from the picture as a whole: edge shimmering. For instance, as the Locust advances towards us during another tense session on Gears of War on the Xbox 360, their extremities seem to glimmer and glitch, presumably as the processing engine struggles to keep up with the rapid changes in image content. The more motion there is in a shot, the more obvious this problem becomes.


Other slight irritants we noted with our test sample were a tendency for the set not to automatically default to the correct widescreen format for different sources, even when using the HDMI sockets, and the rather extensive time it takes for the set to switch between standard and high definition mode. 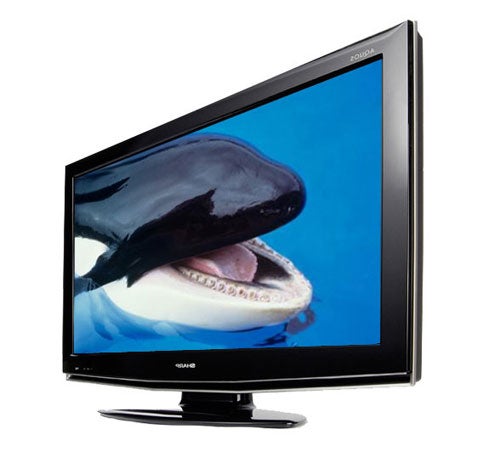 Look past its 100Hz ‘glitches’, though, and you’ll see plenty of goodness in the 32RD2E’s pictures. For instance, while the 10000:1 contrast ratio claim never looks less than extremely optimistic, black levels are really very good by LCD standards. The dark corners of the Nostromo ship in Alien really look quite black, with relatively little sign of LCD’s common ‘greying over’ issue.


This Sharp’s colours are likeable too. They’re every bit as bright and rich as we’ve come to expect from LCD screens, but crucially also hold onto enjoyably natural tones, even during tricky dark scenes.


One final strength of the 32RD2E concerns its fine detailing talents, as ultra-sharp HD fodder such as pretty much any scene on the HD DVD of Mission: Impossible III positively bristles with clarity and definition. Not that the 32RD2E only likes HD, mind. It also leaves standard definition pictures looking sharper than most.


The 32RD2E’s audio is more than adequate, as its impressively small speakers pump out plenty of power and detail, as well as enough frequency range – even at the bass end of things – to make films sound immersive and clear.


Were it not for the 100Hz problems, the 32RD2E’s pictures would really be very good. However, not only can you not turn the 100Hz processing off and so can’t avoid its attendant problems, but it’s also the TV’s main raison d’etre and so a feature you’re clearly paying extra for. In other words, we’d suggest you’re better off either spending a similar amount of money on a 100Hz TV that works more subtly, or else, frankly, spending less on a good 32in LCD that doesn’t bother with 100Hz at all. 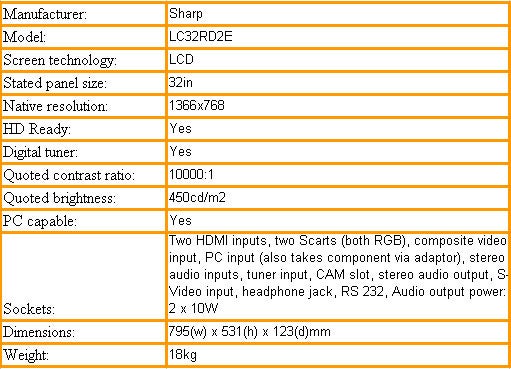