At which point we’d best say that we don’t actually have a confirmed price for this giant among giants. Although the Sharp LC-90LE745 is confirmed for an early 2013 launch into Europe, Sharp still doesn’t feel able to formally price it yet. With the US version shipping for under $10,000 though, there has to be hope that it could nudge under the £8,000 mark in the UK. 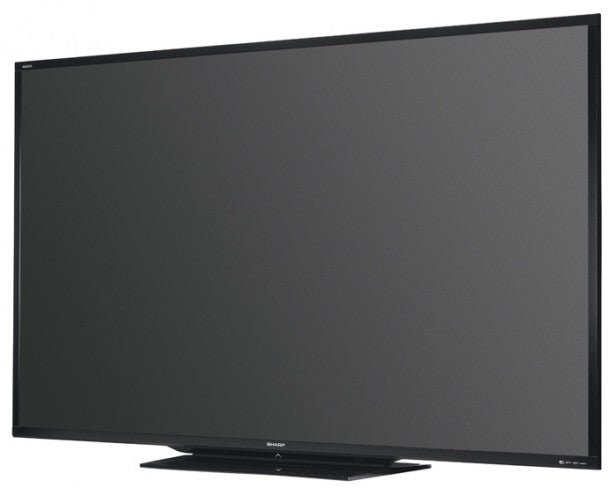 This is, of course, is hardly small change. But when you consider that the 84-inch 4K Sony KD-84X9005 TV will cost more than £20,000 while the Panasonic TH-85VX200 full HD plasma display costs you at least £26k, then suddenly you can see why the Sharp LC-90LE745 has set our home cinema-loving hearts aflutter.

Features
Not surprisingly given its focus on price, the Sharp LC-90LE745 isn’t exactly the last word in high-tech design or features. Its bodywork is distinctly on the chunky side (or ‘festively plump’ as we prefer to call it), while its feature count is in some areas fairly stripped down. For instance, while it does have online features, Sharp’s AQUOSNet platform is way behind most rivals in terms of the quantity and quality of the apps on offer. For instance, Sharp still doesn’t offer the BBC iPlayer on AQUOSNet.

Similarly, the Sharp LC-90LE745E is not as format-flexible as many rivals when it comes to playing multimedia files (though basic photo, music and video support is there); it supports active 3D but doesn’t ship with any glasses included; and while it does carry video processing, this is relatively low level for a screen of such size, being built essentially around a straightforward 100Hz engine.

We guess, though, that Sharp could argue with some justification that finding any of these features in even half-hearted form is fair dos for such an potentially affordable monster TV.

In action during a reasonably long hands-on at IFA (though in less than ideal testing circumstances, as per usual with shows) the LC-90LE745 both thrills and slightly worries in equal measure. Thrilling is the sheer size of the pictures it produces combined with its retention of some of Sharp’s traditional picture strengths. 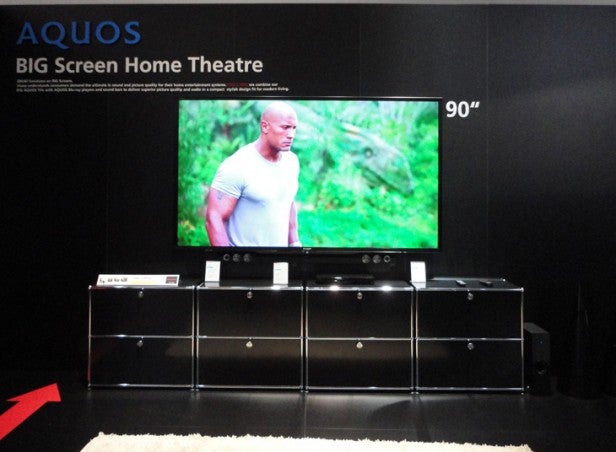 On the size front, there’s no overstating just how big 90-inches is. It looks a whole world apart from Sharp’s 70-inch TV, and as such comfortably jumps from being just a TV to being a genuine home cinema centre piece, doing the sort of big-screen duties normally only possible with a projector.

Picture Quality
As for its picture strengths, its colours are bold and its core contrast performance strong. We didn’t even spot any major issues with backlight clouding – something that we wouldn’t have been at all surprised to find given that the LC-90LE745 uses edge rather than direct LED lighting.

There are, though, areas where perhaps the screen’s humungous size is starting to get beyond Sharp’s price-minded image reproduction capabilities. For instance, we felt slightly more aware of source noise than we did with the 70-inch model. Motion, too, isn’t handled particularly well, with noticeable resolution loss over fast moving objects. And this issue seems again to be slightly exaggerated by the sheer scale of the panel. 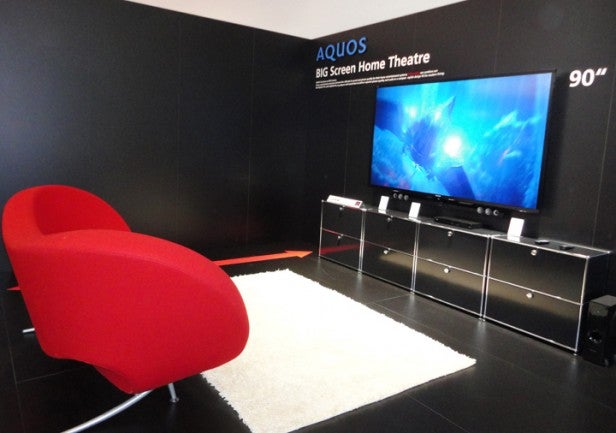 Finally, the picture looks a touch soft, even with HD. This is especially true if considered against the latest 4K screens, of course. But it’s also apparent when comparing the Sharp LC-90LE745 against the company’s own 70-inch and even 80-inch screens that pushing things the extra few inches is clearly starting to strain Sharp’s image processing.

Personally, though, based on our hands-on, we don’t feel too inclined to get caught up at this point in the negatives. After all, if you want a 90-inch TV for a lower price than has been possible before, you’re going to have to accept a compromise or two somewhere, right?