With most stands at the CES cramming in an almost absurd amount of displays and bombarding you with all manner of complicated new technology, Sharp’s infinitely more laid back approach was startling. And, as it turned out, very welcome.

For starters, it had seats on it where knackered journalists could rest their aching feet for a while as they checked out what the brand had to offer.

Even better, Sharp’s CES message really struck a chord with us. For just as its stand was simple but effective, so was the brand’s decision to focus on delivering ‘no-nonsense’ but massive TVs at aggressive prices. 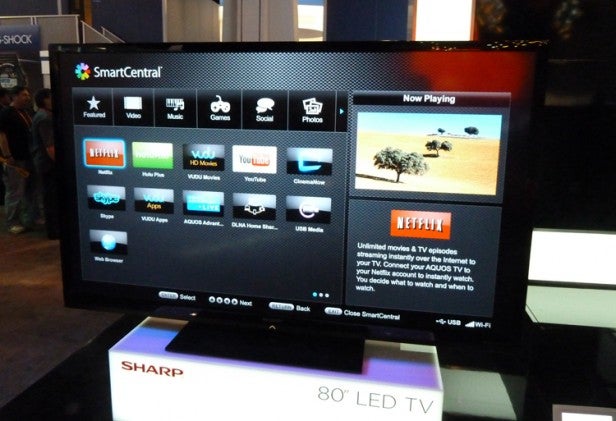 As devoted film fans, big screens are how we like to roll. And being able to get something truly gargantuan without needing either a) a second mortgage or b) to accommodate a projector system sounds like a damn fine argument to us.

Sharp experimented with upping the size of its screens last year – and promptly found its US TV market share balloon from just 2% to a distinctly healthy 10%. So it’s no surprise to find Sharp now expanding its ‘bigger is better’ philosophy into Europe.

The photo below gives a perfect example of Sharp’s new approach in action. For rather than showing 40, 47 and 55in screens as you might expect, the three screens shown here are actually 60in, 70 and 80in! 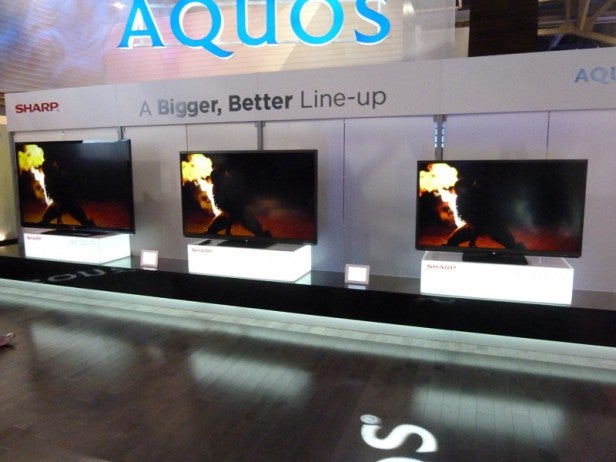 The LC-80LE632U perhaps best exemplifies Sharp’s new business model in action – and is certainly the screen we’re most excited about. As its name suggests, it’s an 80in monster – yet it’s likely to retail in Europe for as little as 5,000 Euros. Not bad when you think that Panasonic’s 85in 85VX200 plasma screen costs £42,000…

As Sharp’s blurb on the 80LE632U points out, an 80in screen offers more than twice the screen area of a 55in TV – so not surprisingly being faced with this amount of screen acreage is an imposing and enticing sight.

It has to be said that Sharp has made little effort to glam-up its monster screen; the bezel is a simple black rectangle, and its rear sticks out much further than most of today’s ultra-slim panels. So much so that we overheard a rather dim-witted show-goer saying ‘just look at the back on that thing. Looks like its 10 years old’.

For us, though, if Sharp’s decision not to prettify its screens helps them to be so affordable, that’s much more important than applying metallic trims to the bezel or shaving a few cm of the rear.

There’s also a fair technical argument for the 80LE632U’s depth, namely that the screen uses direct LED lighting rather than edge illumination. Unless you adopt the contrast-reducing ‘diffusion’ direct LED technology used by LG in its NANO TVs, direct LED systems usually need a little more depth to work well.

Don’t be fooled into thinking from its looks that the 80LE632U is just a bog-standard panel, though. For instance, it employs a unique ‘ribless’ pixel structure that lets more light pass through, to boost peak brightness. It also runs off remarkably little energy for such a massive panel (leading to an A energy rating); it’s got a 100Hz panel; and it’s got integrated wi-fi providing access to Sharp’s (rapidly expanding) online Smart TV services. These services include a unique option for ‘live chat’ with an online advisor to help you set the TV up. 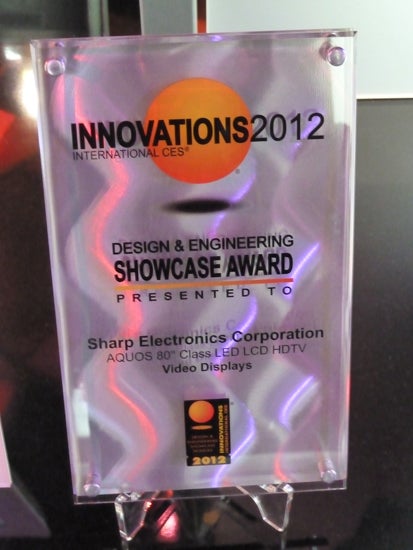 Plus, of course, there’s the fundamental challenge of making an 80in TV that works well but is also cheap. In fact, Sharp picked up a coveted Innovations 2012 Design and Engineering Showcase Award at the CES for its pioneering efforts with its 80in displays.

Spending time in front of the 80LE632U’s massive screen merely enhanced our excitement about Sharp’s big-screen direction. For while its pictures weren’t quite up there with some of the very best TVs at the CES, they were certainly enjoyable. Black levels appeared deep and the backlight looked consistent; brightness levels were excellent for such a massive screen; HD images looked sharp and detailed; and colours looked punchy and accurate. Even the screen’s viewing angle looked pretty good, leaving as our only concerns a slight lack of overall dynamism versus the CES star screens, and a slight shortage of shadow detailing.

At a CES that was more defined than usual by new TV technologies, it was a gamble for Sharp to focus on a simple, price-driven message. But as we walked away from Sharp’s stand already wondering which room we might best be able to accommodate one of its 80in TV in, it seemed to us that while Sharp’s message might not have bagged too many headlines from the CES, when it comes to cold, hard sales later in the year, Sharp’s gamble could end up paying off handsomely.