Every TV brand currently cashing in on the LCD boom owes a big debt of thanks to Sharp. For it was Sharp which first put its money where its mouth was to produce the world’s debut 30in LCD TV, finally proving once and for all that LCD really could work for the large-screen TV market as well as the PC monitor market. So as we set about testing Sharp’s current 32in flagship model, the LC-32GD7E, we can’t help but hope that it benefits from the brand’s unparalleled LCD experience.


Provided you like your TVs to glint like an Aston Martin in the sun, you’ll lap up the 32GD7E’s looks. Clad all over in a resplendently metallic ‘Titanium’ finish, it’s the very definition of futuristic chic. This means its design appeal is perhaps rather ‘blokish’ – but then ladies of the house might still be won over by the space saving nature of its unusually slender screen frame. 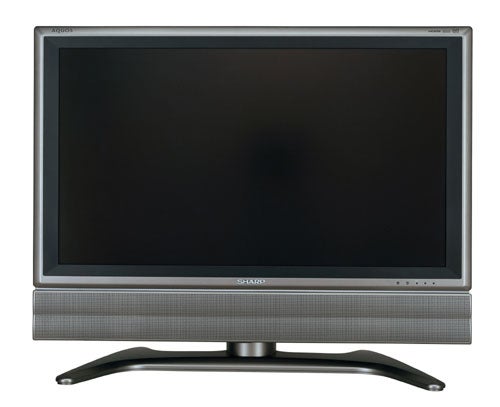 The 32GD7E isn’t quite as well connected as might be hoped from a TV that resides in the higher echelons of Sharp’s range. Single HDMI and component jacks cater for the industry’s ‘HD Ready’ connectivity requirements when at least two digital jacks would have been appreciated; and there are only two SCARTs when we’d really have liked three. At least the set provides PC support via a 15-pin D-SUB port, and there’s a card slot for adding subscription services to the basic channels received by the built-in digital tuner.


Did we say digital tuner? Indeed we did. What’s more, although at launch a couple of months back this TV couldn’t handle the Freeview 7-day electronic programme guide, we’re pleased to report that recent upgrades mean the set can now deliver all the digital TV EPG functionality we’ve come to know and love.


Elsewhere we find the HD Ready connectivity backed up by a suitably ‘HD friendly’ native pixel resolution of 1,366 x 768, and compatibility with the 720p and 1080i HD formats. Note that 1080p signals cannot be accepted.

Sharp’s on-paper specifications for the 32GD7E don’t read especially well, with neither the 450cd/m2 brightness nor 800:1 contrast ratio figures exactly setting any new records. Here’s hoping Sharp has just measured them more conservatively than most rivals do.


Delving into the 32GD7E’s onscreen menus in a quest for more features proves an unrewarding experience. Not because there aren’t enough features to uncover, but because using the onscreen menus is such a chore. The menus appear so obsessed with trying to occupy as little screen space as possible that you’re forced down endless confusing and awkward-to-navigate sub-menus to achieve even the most basic adjustment. Yeuch! 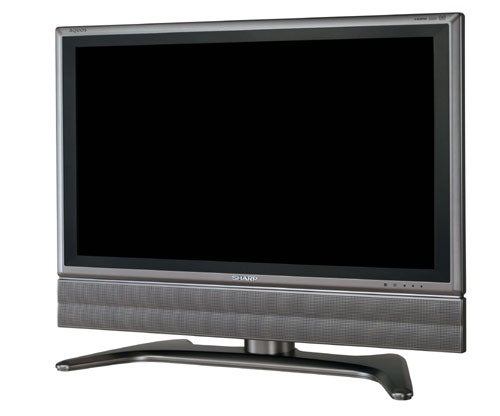 Among the most important of the features available once you’ve got your head round the menu structure is a selection of progressive scan settings, which can have quite a radical effect on how good or otherwise you picture looks. Our advice would be that you shouldn’t be afraid to experiment with the various options offered, and that you should consider readjusting them depending on the type of picture (sports, film, news) you’re watching.


Also of interest are a suite of picture in picture facilities, and a processing system for reducing the judder sometimes experienced with horizontal motion on LCD TVs.


Let loose on everything from Sky and Freeview digital broadcasts to a DVD player and an HD-running Xbox 360, the 32GD7E’s pictures vary quite wildly between outstanding and merely average.


Unusually the TV is at its best – relative to the competition, at least – with something many LCD rivals really struggle with: standard definition PAL pictures from its digital tuner. Such images really can look superb, thanks in the main to some fabulously aggressive colours and an almost complete absence of the sort of blocky noise that characterises digital broadcasts on so many LCD rivals. Freeview pictures also look sharper and more three-dimensional than is common for an LCD TV, giving you a delightfully direct connection with what you’re watching.

The 32GD7E also looks the business with bright, high definition footage, such as the landscape of Cyrodiil during the gorgeous daylight hours of Elder Scrolls IV: Oblivion on the Xbox 360. The amount of fine detail to be seen is out of this world – a feat made all the more impressive by a complete absence of the sort of grain or dot crawl that sometimes accompanies such sharpness. The colours are again outstandingly dynamic, too.


From what you’ve read so far you’re probably wondering why the marks at the top of this review aren’t higher. The answer lies in a collection of small brickbats, kicking off with the fact that although they’re mostly strong, colours can during darker scenes – especially with poor quality source signals – start to drift off tone, looking less natural as they go. Also, when we tried watching the 32GD7E in a bright room it was impossible not to be struck by its lack of brightness. Finally, although dark parts of the picture avoid the greying over that’s so common in the LCD world, they also tend to look a rather hollow – more like black holes in the picture as opposed to an integral part of it.

As with its pictures, the 32GD7E gets most but not quite all things right when it comes to sound. The good news is that the sound is spread far and wide around your living room, contains more bass than is common for a flat TV, and presents high-pitched effects clearly and without harshness. The bad news is that dialogue can get a little lost when the going gets loud.


In many ways the 32GD7E is a seriously appealing TV. It looks lovely in a macho kind of way, and its pictures can at times look stunning. The problem is that it’s one of the most expensive of the current 32in LCD crop, and as such its occasional foibles are much harder to ignore.