If you’ve been looking round for an LCD TV for a while and think you’ve seen this Sharp before, then OK, yes, we admit it: the LC-32GA6E is no spring chicken. It’s been around for a good few months now, in fact. But we make no apologies for including it in our pre-World Cup TV marathon for one simple reason: the longer it’s been out there, the more its price has been slashed.


This means that from an opening price point of £1,200, it can now be yours for just £850, making it the cheapest 32in LCD TV we’ve yet looked at. Before you all rush out to buy one, though, there’s one question that inevitably has to be asked: how cruel has the passage of time been to its performance? 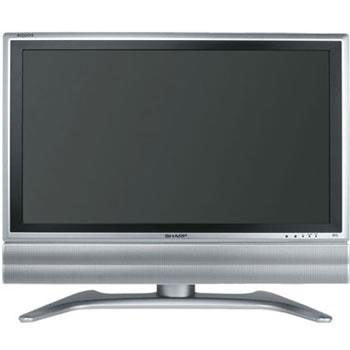 There’s certainly nothing dated about its appearance. Its strikingly metallic ‘Titanium’ finish is as robust as it is stylish, and it’s wrapped around a body that emphasises its slenderness while also managing a tasteful curve or two in all the right places.


When it comes to connections the 32GA6E gets the HD Ready job done without bothering to impress us with anything extra. So you get just single HDMI and component video options for HD, plus a measly couple of SCARTs and a PC input. The only ‘extra’ above and beyond what you’d normally expect to find on any 32in LCD TV these days is an FM tuner input, so that you can use the set as a radio as well as a TV. We’re not exactly sure how many people will actually make use of this feature unless they’re getting a 32GA6E for a second room, since most folk will probably already have a dedicated hi-fi in their main living area. But we guess it’s always better to have more features rather than less, right?

The 32GA6E’s screen specifications are slightly worrying, and possibly offer an early indication of the set’s relative vintage. The 1,366 x 768 native resolution is fair enough, but the claimed contrast ratio of 800:1 is hardly cutting edge and the claimed brightness of 450cd/m2 is unusually low. Hmm. Oh well – these figures can be notoriously variable in their accuracy, so we’ll wait until we see the set’s pictures in action rather than jumping to any hasty conclusions.


A search for more features starts with a disappointment: the 32GA6E doesn’t carry a digital TV tuner, leaving you with analogue reception only. This is obviously not a problem for people with Sky HD or who don’t mind stumping up for an external Freeview box, but we’re not sure that either of those scenarios will apply to the sort of budget-conscious audience the cut-price 32GA6E is now targeted at. 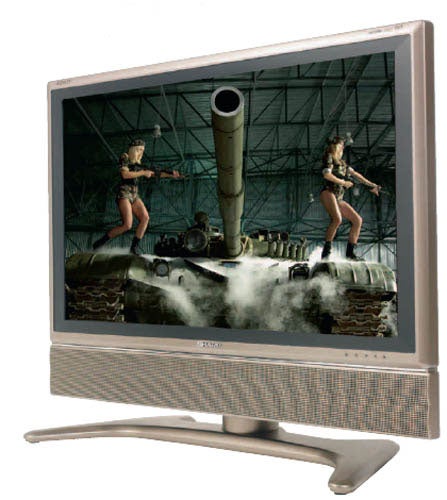 The absence of the digital tuner is not indicative of a general lack of feature punch, however, as the Sharp’s onscreen menus actually play host to more options than you might expect for £850. Among the most interesting of these are a dedicated backlight level adjustment, motion compensation for tackling noise over moving objects, dynamic contrast boosting, automatic gamma level optimisation, manual selection of interlaced or progressive scanning, an optional comb filter, and Dolby Virtual audio processing for a ‘pseudo surround’ soundstage.


Our only argument with one or two of these features would be whether it’s really a good idea to put them in the hands of consumers! For instance, if you choose the wrong interlaced/progressive setting for the type of source you’re watching, it can have quite a radically negative effect on the final picture quality. So we can certainly imagine people buying this TV and spending most of their time watching it on the wrong setting without realising how much better their pictures should be.

And so to the moment of truth: how does this LCD old boy’s picture quality hold up against its younger rivals?


When it comes to fine detailing and sharpness, at least, it holds up very well indeed. Even the most textured and detailed high definition scenes are done full justice by the Sharp’s resolution – especially as all the minute image data is presented cleanly, with no trace of such common noise problems as dot crawl, shimmering or over-stressed edges.


Colours are better than we might have expected, too, during high definition viewing, confounding the set’s relatively low brightness rating with some good vibrancy during bright scenes, and subtle, natural toning during dark ones. The vibrancy is particularly distinctive while playing colourful Xbox 360 games like Kameo.


More good news with HD sources is how unusually stable and solid they look, thanks partly to the absence of the flickering occasionally witnessed with LCD TV’s HD pictures, and partly to the set’s impressive subtlety with colour blends and shadow detailing.


While all the above strengths are enough in themselves to make the 32GA6E a respectable performer, though, there are also enough problems around to stop it being a really good one. For starters, black levels are only fair to middling in terms of how deep they can go, with slightly more evidence of the tell-tale grey mist over dark areas than we’d ideally like to see.

While that’s arguably the only problem that affects high definition pictures, a couple of other quite major ones come into play when you shift down to standard definition. The colour tone becomes much less natural looking, especially where people’s skin tones are concerned. Also, harshly contrasting edges begin to look exaggerated and ‘peaky’, which can make the picture look a bit fractured and uneven. And finally there’s noticeably more of LCD’s smearing problem with motion.


The speakers under the 32GA6E’s screen look like they mean business, but actually they sound rather flat when the going gets tough, lacking the raw power to handle either deep bass lines or sweetly rounded trebles. This means the mid-range can sound overcrowded during loud action scenes.


How appealing the 32GA6E is depends entirely on how much money you’ve got to spend. If £850 is your limit, being able to get 32in of respectable LCD pictures when you probably thought you’d only be able to afford 26in make it an intriguing prospect. But if you can rustle up an extra £200-£300, you can certainly find 32in TVs that will give you more.