If you’re unhappy with the quality of the sound coming out of your flatpanel TV (and let’s face it, who isn’t?) the obvious solution is to invest in a home cinema system. But that’s often easier said than done. Constraints on your budget or living room space might rule out a full 5.1 or 7.1 speaker system and AV receiver, and the clutter that comes with most systems might fill you with dread. If that’s the case then a soundbar might be more suitable, as they deliver an audio upgrade without encroaching on your living space. 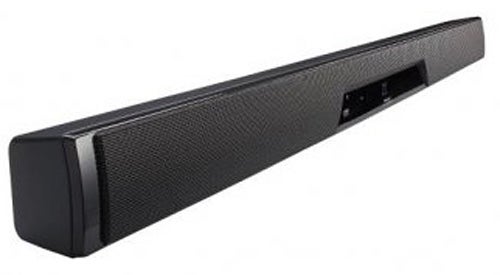 Sharp first ventured into the soundbar market back in 2009 with the HT-SB200, a relatively basic but affordably priced model that offered decent sound quality. The HT-SB400 is the step-up version, with a couple of differences – its greater 985mm width matches Sharp’s AQUOS TVs from 42in to 46in (the 800mm HT-SB200 was designed for 32in to 37in TVs) plus the built-in speaker system has been upped from 2.1 to 3.1 channels.

There have also been some very welcome improvements to the external design. Gone are the chunky buttons and garish blue digits in the front display panel and in come a scrolling dot matrix display and a cluster of touch-sensitive controls that light up when you put a finger on the panel. A row of icons allows you to choose from the various sound modes, plus there are volume, power and input controls. The rest of the HT-SB400’s front panel is taken up by a speaker mesh hiding the driver array – more on that later. There’s nothing overly radical or jaw-dropping about the design – it’s just a sleek black box that should blend in seamlessly with any surroundings. 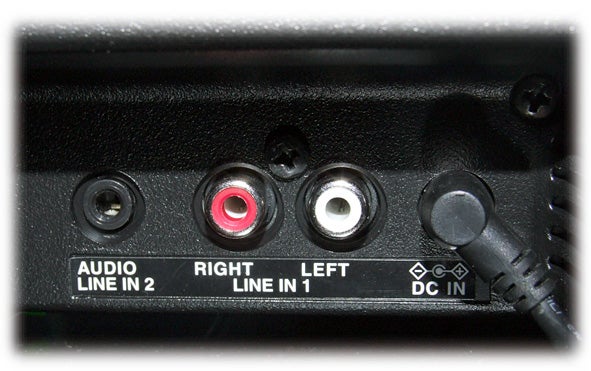 The Sharp also boasts excellent build quality thanks to an enclosure made from strong, sturdy materials, making it surprisingly weighty. And when mounted on the wall below a TV using the supplied brackets, its 70mm depth means it won’t stick out too far. Wall-mounting isn’t the only option however, as it can also be placed on a TV stand if you connect the supplied feet cushions or spikes.

On the rear panel is a modest line-up of connections, which reveal the HT-SB400 to be less a home cinema hub and more a glorified set of TV speakers. There are just two inputs – analogue stereo and a 3.5mm minijack port primarily for MP3 players – plus a subwoofer pre-out. It’s not geared up to accept or decode digital bitstreams from Blu-ray or DVD players – the idea is that you simply connect your TV’s analogue output and enjoy whatever’s on, rather than hooking up all of your external kit and using the HT-SB400 as an audio hub.

Another of the HT-SB400’s features is SRS WOW HD sound processing designed to boost the clarity and dynamism of the sound output as well as adding a surround sound effect. The drivers use High Definition Sound Standard technology, which is supposed to eliminate distortion and deliver what its creators describe as a ‘smooth, layered sound with a pure tone’.


There’s a range of TruSurround HD sound modes designed for different types of TV programme – News, which places a little more emphasis on the speech frequencies; Cinema/Game, which adds extra bass depth; Sport, which appears to widen out the sound to bring out the atmosphere of crowd noises; plus a Standard mode. 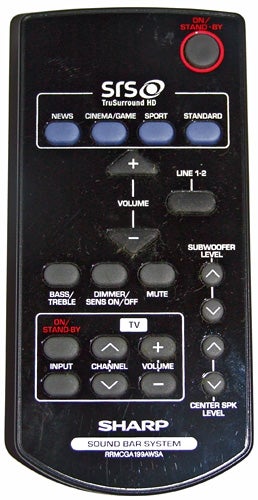 These are complemented by a surprisingly flexible range of audio adjustments, allowing you to tailor the sound to your liking. There are bass and treble settings (-5 up to +5 in both cases) as well as subwoofer level and centre speaker level settings.


All of these tweaks are controlled using a credit card remote, which sports some rather small buttons but it’s fairly simple to use. A single button lets you switch between the two inputs and there are individual controls for the subwoofer/centre volume levels, plus each listening mode has its own button and you can control certain Sharp TVs using the bank of buttons at the bottom.

We connected our Sky HD box directly to the Sharp and after listening to a variety of TV programmes the good news is that it fulfils its primary objective, delivering sound that’s richer and fuller than most flatpanel TVs we’ve ever laid ears on.


Playback of a Europa League match on Five with the Sport mode selected reveals crisp and open reproduction of the crowd noises, with the commentators’ voices emerging clearly and prominently from the middle of the bar. It’s a comfortable listen, with just enough natural bass to stop it sounding thin and fatiguing. The dramatic sting that bookends the adverts on Five’s Europa League coverage is loud and powerful too, particularly the booming drums.

Programmes like ”Question Time” and ”News at Ten”, with their heavy speech content, are conveyed with impressive clarity, and the News mode brings extra body to the newsreaders’ vocal tones and pompous theme tunes. The HT-SB400 also does a pleasing job with the wider mix of sounds in dramas like ”Outcasts”, keeping speech intelligible, lending depth to the more dramatic moments and drawing attention to background detail. It’s an admirably crisp, clean sound with no obvious distortion and only occasional suggestions of high-frequency brightness, suggesting the HDSS driver tech is doing a good job.


However, although the built-in bass capabilities of the HT-SB400 are far superior to those of most flatpanel TVs, it can’t quite satisfy the demands of movie soundtracks. There’s some evidence of low-end authority, particularly if you play around with the bass and subwoofer level settings, but not enough. If you’re planning on watching films regularly then we recommend adding a powered sub, which gives low frequency effects extra kick.


There’s also precious little surround presence, which isn’t a big deal but worth mentioning to underline that this is no replacement for a true surround sound system. We also tried the Sharp with music and although it’s clean and detailed, it’s also a little cold – but then this was never conceived as a hi-fi replacement.


The HT-SB400 has been designed with a very specific brief: to play back TV sound with greater power and clarity than typical flatpanel speakers, and on that score it succeeds. Everyday TV viewing is a more rewarding experience thanks to the extra volume, punch and depth on offer. It’s also quietly stylish and the touch-sensitive controls are a fantastic addition.


Of course, it can’t hope to compete with multi-faceted soundbars from the likes of LG and Panasonic – it’s not a home cinema hub and the feature count is too low – plus you need to add a subwoofer to really make it sing with movies, which may deter those after a neat single-box solution. But as a simple sound upgrade without the trimmings then it’s a decent purchase.