Following in the footsteps of Samsung’s HT-WS1G, B&W’s Panorama and Crystal Audio’s SSB-1, Sharp’s first soundbar is designed to offer an upgrade from the soggy sound quality of most flatpanel TVs.

Sharp HT-SB200 soundbar not for you? Check out our round up of the best soundbars to buy


But improved audio isn’t the only reason why these all-in-one sound systems are taking off in a big way – they’re wall-mountable, which makes minimal demands on your living space, the lack of rear speakers keeps ugly cables to a minimum and their stylish, unimposing designs are guaranteed to get the green light from sceptical spouses.


At one end of the soundbar spectrum, you have models like the Philips HTS8100, which packs everything you need into a single box – DVD player, 5.1 sound decoding/amplification and speakers. At the other end are models like the Monitor Audio Radius One HD, which are simply three passive speakers shaped into a soundbar. The Sharp sits somewhere between the two, boasting 32W of built-in amplification and sound processing, but no on-board decoding.

It’s a 2.1-channel system, housing full-range left and right speakers and four built-in subwoofers, but like most soundbars it features some token surround sound tech that claims to simulate the 5.1-channel experience. In this instance it’s HDSS (High Definition Sound Standard) and SRS WOW HD.


The HT-SB200 is an unassuming unit, designed to blend in seamlessly with your TV rather than divert attention from it. That’s not to say it’s ugly – the black finish is actually smart and tasteful – but it lacks the upmarket sparkle of the Samsung HT-WS1G.


At 65mm high and 70mm deep, it’s remarkably compact plus its 800mm width makes it best-suited for TVs between 32 and 42in. It doesn’t have to be wall-mounted – four screw-in feet are supplied for table top placement on your AV rack, but wall-mounting is the most aesthetically pleasing option.

The small, centrally-placed display panel on the front shows two digits at a time. Usually this is the currently selected input (L1, L2) but switches to the volume when adjusted (which goes up to 60). If the display proves distracting there’s a dimmer button to reduce its intensity.


On either side are lights indicating the currently selected sound presets, of which there are four – Standard, Cinema/Game, Sport and News. Below these is a row of miniscule buttons for up-close control of volume, sound modes, input switching and power.

Glancing at the rear panel we did a double take. There are just two inputs, one analogue stereo and a 3.5mm minijack for MP3 players. The lack of on-board decoding for Dolby Digital and DTS explains the lack of digital audio inputs, but a few more analogue ports is essential given the number of components in a typical system. You can hook up a DVD deck, but what happens if you also want to run your Sky box and games console through the system? Of course you could run your TV’s audio out into the HT-SB200, which would solve that problem, but then you’d have to turn your TV on every time you wanted to listen to a CD or the radio.


In the States there’s a step-up version (HT-SB300) which adds a digital audio input, Dolby Digital/DTS decoding and a subwoofer output, but there’s no word on when that’s being released in the UK.

Given the lack of sockets and the rudimentary display panel, setup is a quick process. The unit is also easy to operate with the terrific credit card shaped remote, which has a pleasingly low button count. In the centre there’s a diamond of keys that control volume and the subwoofer level, which ranges from -5 up to +5.


You can also adjust the bass and treble levels by pressing the relevant button and using the volume keys to find the right tone. Also useful are the row of sound preset keys along the top and the cluster of controls for Aquos TVs.

A couple of other features to mention – the unit automatically goes into standby when left idle for too long but springs back into life when it detects a signal, plus standby power consumption is kept to an eco-friendly 0.6W.


With our OPPO DV-981HD DVD deck firing House of Flying Daggers to the Sharp from its analogue outputs, the sound is fast and full-bodied. At this sort of money you shouldn’t expect a perfect performance, and indeed there are certain flaws that don’t always make for a comfortable listen. But if you’re upgrading from plain old TV speakers there’s no doubt that the Sharp will greatly enhance your enjoyment. 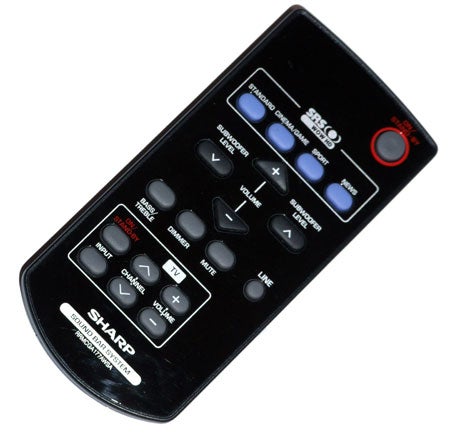 We headed straight for the movie’s excellent Echo Game scene (chapter 3), and when the captain starts flicking his crackers at the drums, each one bounces off with a taut thump. Also impressive is the solid and rhythmic drumming that underpins Mei’s graceful dance moves, accompanied by the delicate tinkling of her ornate head wear.


Bass from the integrated subs lacks punch and presence during large-scale set pieces, even when turned up to the max, but if you’re used to TV speakers then it’ll seem positively monstrous.


The Sharp also extracts a reasonable amount of detail and handles high-frequencies more smoothly than you’d expect at this price – the sounds of broken china hitting the floor and swishing bead curtains are crisp, plus the background ambience of the bamboo forest is clearly conveyed.


But as the soldiers enter, there’s a definite air of hardness to the clashing swords, while the sounds of rustling trees and splitting bamboo canes are overly bright. There’s also a touch of sibilance on some dialogue.

The Sharp’s surround sound performance is predictably unconvincing but the competent SRS WOW HD processing does offer plenty of width across the front soundstage.


To test the Sharp’s music mettle, we played Feels So Good by Grover Washington Jr on CD and again the Sharp’s tone is too bright. Kick and snare drums are punchy and Grover’s sax has a rich tone, but the tambourine and cymbals are too overpowering. Trimming the treble level helps but that upsets the overall dynamics.


Despite the flawed sound quality, it’s worth remembering that the Sharp HT-SB200 sounds about one hundred times more exciting than any flatpanel TV we’ve encountered, and at this price it was never going to be a sonic world-beater anyway – for the money it’s not a bad effort. But what bothers us more than the sonic shortcomings is the paltry socket selection and lack of audio decoding, which makes this soundbar only suitable for the most basic of systems.