Fresh from dipping its toe into the Blu-ray pool with the BD-HP20H, Sharp now turns its attention back to DVD with a new 2.1-channel system, the HT-DV50H. Interestingly, the company seems to have abandoned the traditional concept of 5.1 altogether, with no six-channel systems in its current range – a reflection of the ‘less is more’ attitude that pervades the current home cinema market.


The HT-DV50H is the best-specified system of the two, offering elegant tall boy speakers instead of the smaller satellites that come with the cheaper HT-DV40H. The speakers are finished in gloss black and perched on a circular stand – an extremely fashionable design that makes the perfect accompaniment to a plasma or LCD TV.


The main DVD receiver unit is equally stylish and beautifully built, sporting a fetching black/silver finish and a discreet disc slot instead of a tray. The large volume dial is surrounded by a bright blue light that’s a little overbearing but at least it’s easy to find in the dark. What’s more, its narrow width makes it more compact than most systems. 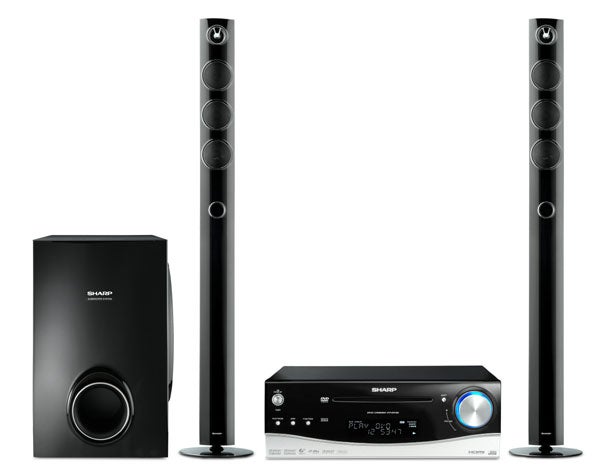 The receiver’s silver section drops down to reveal a headphone jack and USB port, which allows you to connect card readers or flash drives and play back MP3, WMA, JPEG and DivX files. DivX downloaders will be pleased to note that it supports all versions of the format, and a registration code in the setup menu lets you play back video-on-demand. All of these compressed media files can also be played back from CD or DVD.


As is customary for a system designed to accompany the latest flatpanel TVs, the HT-DV50H is equipped with an HDMI output, which offers 576p, 720p and 1080i output. Given Sharp’s experience in creating hi-def TVs, it knows only too well the potential advantages of feeding a pre-upscaled 1080p picture into a Full HD TV, so it’s surprising not to find this format included here.

The back panel also offers progressive scan-capable component video, S-video, composite and RGB Scart outputs, plus two optical digital audio inputs and stereo audio input. The line up is completed by springclip terminals for the front speakers and passive subwoofer, plus an FM radio antenna input.


The receiver unit handles amplification and generates 250W (RMS) of power, which breaks down as 75W per front channel and 100W for the sub. It’s also equipped with a range of sound technologies, chief among which is Dolby’s Audistry technology, a group of four audio-enhancing modes. They include Sound Space (which widens the stereo soundstage), Natural Bass (which boosts bass, obviously), Intelligent Volume (which keeps sound at a consistent level by reducing loud sounds and increasing quiet ones) and Mono to Stereo (which, er, converts mono to stereo). 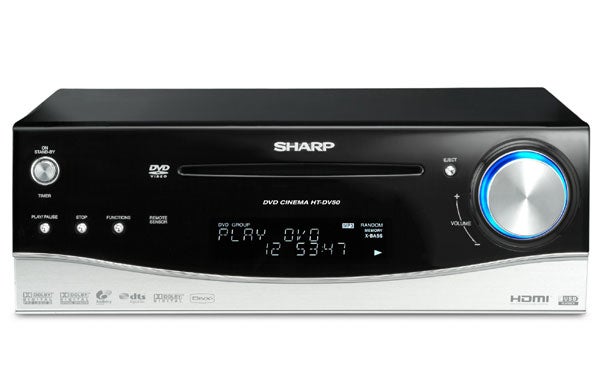 These are joined by another Dolby technology, Virtual Speaker, which aims to recreate the missing centre and rear channels by projecting them into the relevant spaces in the room. We haven’t been impressed by this technology on other systems, but perhaps Sharp’s application of it will change our minds.


Rounding up the sound features is a range of presets for specific types of material (News, Sport, Cinema etc) plus bass and treble adjustments. Elsewhere Sharp is keen to emphasise the energy saving aspect of this system, which consumes just 0.6W in standby. Of course it consumes even less if you switch it off at the mains but that doesn’t sound as good on a press release.


The system is easy to install, with the three-part speakers slotting together easily with a neat cable tidy system around the back. However the system’s user interface is basic and ugly, while the remote is cluttered by a sea of tiny buttons and even tinier lettering. It also commits the cardinal sin of using dual-purpose buttons and a Shift key, which has to be held down to access certain functions.

But the HT-DV50H makes up for its remote with a terrific sound performance. In honour of the new Indiana Jones film that opens in a few weeks’ time, we thought it appropriate to whip out our Indy DVD boxset, and Raiders of the Lost Ark’s Dolby Digital soundtrack sounds terrific through the HT-DV50H’s competent speakers.


Particularly impressive is the reproduction of John Williams’ classic score, with the crisp bursts of brass and rich, sweeping strings drawing you right into the heart of the action. But other elements of the soundtrack are also well handled – dialogue sounds clear and the sub’s beefy bass output gives the movie’s frequent action scenes genuine gravitas.


It’s not perfect though – the sub strays into boomy territory at times (prompting us to trim the level using the dedicated volume) and certain loud noises such as Short Round’s annoying voice (I second that – ed.) in Temple of Doom sound occasionally shrill. But on the whole it’s a very respectable sonic performance. 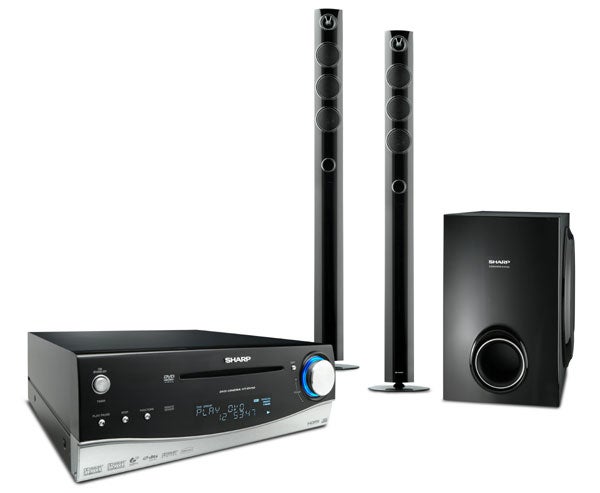 As for Dolby Virtual Speaker, it does make a difference to the width of surround effects but we wouldn’t say it was a particularly convincing replacement for real rear speakers. Of more use is Natural Bass, which injects a touch more depth to the bass channel. CD playback is very good indeed, with great treble reproduction and smooth bass tones.


Sadly the HT-DV50H’s picture quality doesn’t do justice to its decent sound performance. Viewed via HDMI at 720p or 1080i, the image looks soft, pixellated and twitchy and the colour balance is overcooked, giving skin tones a reddish hue and reducing the film’s cinematic quality. Diagonal lines and edges look excessively jagged right across the picture, particularly noticeable on the text of Raiders’ opening titles. We looked for the same flaws on our Toshiba HD-E1 deck but they were nowhere to be seen.


Sharp’s system gets off to a good start in the looks and features departments, and follows it up with very good sound quality that exhibits only one or two minor flaws. But then it undoes all the hard work with the sort of poor picture quality you wouldn’t even expect from a cheap supermarket deck, let alone the range-topping system from an AV superstar like Sharp. If you prize looks above everything else give it a try, but if you care about picture quality then it might be worth looking elsewhere.