While it was, understandably, the previously previewed Sharp LC-90LE745 that caused the biggest stir on the brand’s IFA 2012 stand, it was actually something much smaller that struck us as being of greater interest to your average UK household.

Design
For once we managed to tear our gaze away from Sharp’s TV giants, our eye fell on Sharp’s nifty new Freestyle Aquos TVs. These 40, 46, 52 and 60-inch screens are cleverly designed to make installing them into ‘designer’ environments much easier. How? Because instead of building their connections into the TV bodywork, all your sources instead go into an external box that then beams full HD video wirelessly to the screen, no matter where you’ve put it.

Wireless TV
If you wall hang a Freestyle TV, the only cable you’ll need to accommodate at the wall end of things is the screen’s power cable. The rest can be handled by the external box. Or if you’re reasonably strong you could treat your Freestyle TV as a ‘portable’ model, where you shift it from room to room without needing to take all your sources with you. 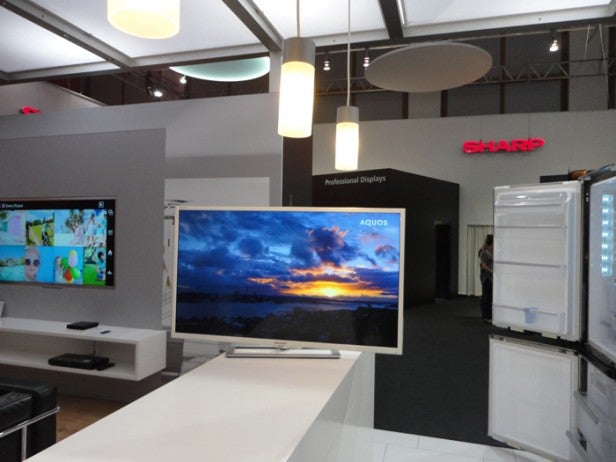 This portable idea was actually explored more convincingly by much smaller and battery powered Freestyle TVs that were shown at the Las Vegas Consumer Electronics Show in January but not ultimately launched into the UK. But the idea of an external source box with wireless HD connectivity still holds plenty of currency with us even in a less portable format; in fact, some analysts believe that external connection and tuner boxes will one day become the de facto way of doing things.

External box advantages
After all, external boxes are likely to deliver much greater upgradability so that your TV can stay ‘current’ for longer. It’s also easier for them to contain built-in HDD memory for recording. Or you could replace an external box with a new one as technology advances, without having to replace your whole TV.

The external box shipped with the Freestyle TVs doesn’t go the whole hog, in that it doesn’t carry a built-in HDD for recording. However, it does contain all the necessary tuners and AV ports, and carries built-in Wi-Fi via which it can access multimedia from a DLNA PC or go online with Sharp’s AquosNet service. It can even stream files from both Android and iOS portable devices. 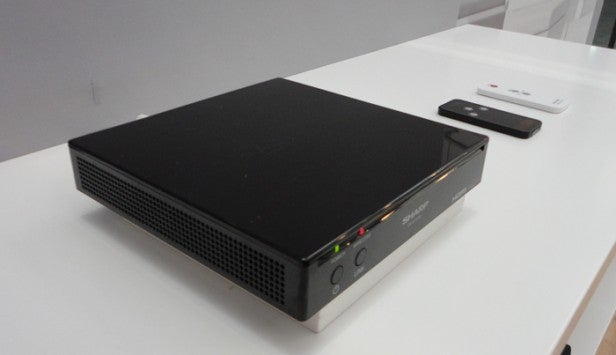 The external box containing this functionality is attractive and surprisingly small, while the Freestyle TV screens are very easy on the eye indeed. They’re available in black or white finishes, and combine a svelte profile with a typically crisp and clean Sharp design.

HD transmission
Sharp maintains that the HD video transmission system so integral to its Freestyle idea will work over a 20-30m range. We couldn’t test the outer reaches of this claim during our hands-on, but the signal certainly seemed stable enough over around 5-10m. Which can be considered impressive given the potential for interference you get on any busy show floor.

The pictures from the Freestyle screens looked classic Sharp: extremely colourful, very natural, decently detailed, fairly contrast-rich, but also a touch prone to motion blur and lacking a little of the colour subtlety you get from the very best TVs. 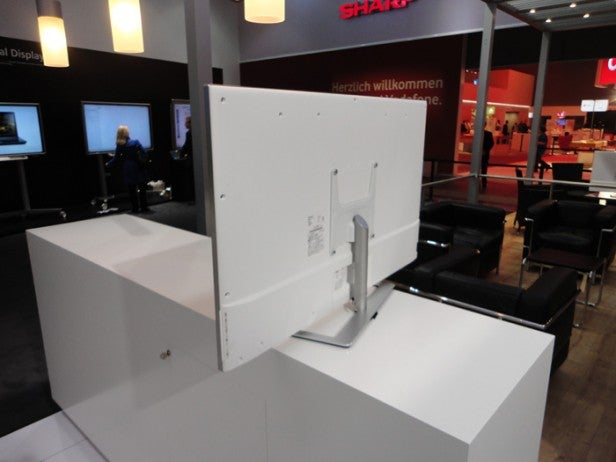 The pros of the picture will comfortably outweigh the cons for most people, though – or at least, the issues won’t be considered troublesome enough to stand in the way of the aesthetic and practical advantages of having all your TV’s connectors contained in an external box.

Sharp wouldn’t be drawn on pricing for its Freestyle range at IFA, and nor would it give us a firm UK release date. But Sharp did confirm that the Freestyle sets are definitely UK-bound at some point, so we eagerly await their arrival on our test benches.