To coincide with the launch of its new range of Quattron 3D TVs, Sharp has launched its first ever 3D-capable Blu-ray player, the BD-HP90S. Sharp’s previous players have failed to impress with their limited feature lists and dull designs, but one glance at this player’s improved spec sheet and its gorgeous new look tells us that Sharp may have laid those ghosts to rest.

The BD-HP90S is by far the best-looking Blu-ray player the company has ever produced, even giving style-mongers like Samsung a run for their money. Key to its allure is the choice of two installation options – the deck can be laid horizontally in the traditional way, or stood upright on the supplied stand. That in itself is enough to make the BD-HP90S stand out from the crowd, but Sharp has also dressed the deck in some seriously sleek and sexy bodywork, as well as squeezing everything into a case measuring a mere 36mm high. The combination of deep gloss-black and silver works a treat, while neat little touches like the front-loading disc slot and a ring of blue light on top are the icing on the cake.


Being so slim, there isn’t a lot of room for buttons or connections, which means Sharp has had to strip it down to the basics. Inside a recess on the curvy bottom panel is an HDMI v1.4 output, an optical digital audio output and an Ethernet port, while a USB port adorns the front panel. Those looking for multichannel analogue outputs or a second HDMI output for piping 3D pictures and HD audio separately are out of luck.

As we mentioned earlier, Sharp has stepped up its game in terms of features. Perhaps the most attractive of the newly added features is built-in Wi-Fi. This makes it possible to connect this deck to your wireless web router and stream music, video and photo files from other devices on your home network, as well as accessing BD Live content and watching videos on the built-in YouTube portal. Unfortunately, DLNA networking and YouTube access haven’t yet been enabled – Sharp says they’re being made available with a software update in the first quarter of 2011.

For now though, the best way of playing digital media is via the USB port on the front panel. According to Sharp’s website, the player supports DivX HD, MP3 and JPEG, which many not be the all-encompassing support of an LG or Samsung but is a marked improvement on 2009’s BD-HP22H, which didn’t offer any sort of media playback from USB and only supported JPEG from discs. The BD-HP90S also supports AVCHD and can output Dolby TrueHD, Dolby Digital Plus and DTS HD Master Audio via HDMI as bitstream, or PCM. Like any player worth its salt, it also outputs pictures at a film-friendly 1080/24p frame rate.


That’s the features pretty much covered, but in terms of operation, the BD-HP90S’s onscreen menus benefit from a much-needed overhaul. Like the mind of Alex Reid, the new ‘Home’ menu is simple and uncomplicated – in the top left of the screen is a small list of options including Movie, Picture, Music and Settings. The first three obviously provide direct access to media from USB stick or disc, while the Settings a decent array of tweaks. The presentation is unfussy, but the use of crisp white text on blue background is welcoming and easy to digest. It’s no match for Sony’s Xross Media Bar or Samsung’s latest menu, but better than Sharp’s previous efforts. It also responds quickly to remote commands, which is always essential. 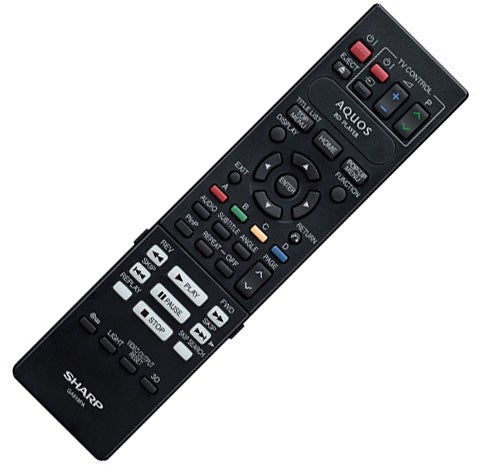 Within the setup menu, you can select the specific HDMI output resolution or simply select the Auto mode, plus you can choose to automatically play 3D discs or force it to output everything in 2D. You can also setup the Network connection here, but this is horribly complicated – for the wireless settings, there’s no step-by-step wizard as found on other Blu-ray players, instead you have to enter the entire name of your access point using the cumbersome text entry system, key in the password and then test the connection.


We also gave it a whirl with a USB stick filled with a mixture of file types. Surprisingly it didn’t play our DivX HD or regular DivX movie trailers, but happily played our MP3 and AAC files. As for disc loading speed, ”Terminator Salvation” took just over a minute to start playing, while ”The Dark Knight” took just over 30 seconds.


The player comes with a remote that you’ll want to tuck down the side of the sofa. Its blocky shape and dull grey finish make it look like a VCR zapper from the 90s, a far cry from player’s jazzy new look. Button placement and labelling are OK, and there’s a flap at the bottom that hides the number keys, but otherwise it’s back to the drawing board for this one.

Thankfully, the BD-HP90S delivers hi-def pictures that do look as sharp and snazzy as the player itself. We tried out all of our favourite test discs – ”Inception”, ”Avatar”, ”Terminator Salvation”, ”The Dark Knight” – and found that the deck renders the intense detail on each one with exceptional clarity, without sullying it with noise.


For instance, with ”Avatar” the exotic landscapes of Pandora look mesmerizingly textured, while close-up shots of CG creatures or human faces reveals intricate detail like scales and tiny indentations. But it’s not all about razor-sharp detail – its pictures also boast smooth, subtle shading, and during dark scenes it stops the image looking like a black, mushy mess by picking out plenty of detail among the shadows and clearly differentiating between the different layers of blackness.


It also conveys colours with the sort of depth and richness that film-lovers look for. The image is irresistibly cinematic, plus when viewed on a 24Hz compatible TV you get smooth, judder-free movement. This comes in particularly handy when playing the frantic action scenes in ”Terminator Salvation”, as huge robo-spacecrafts and futuristic fighter jets dart around the screen.

Switching to the 3D Blu-ray version of ”Avatar”, we find the BD-HP90S to be highly capable of handling the extra dimension. Images are given an engrossing sense of depth and perspective, while the image layers are rendered without compromising the clarity of foreground detail or the smoothness of its motion tracking. Shots of banshees swooping through the sky with the hills and floating mountains stretching off into the distance are simply stunning.


With the Silicon Optix HQV disc, we were impressed by how smoothly the Sharp handled the entire gamut of test patterns. The moving bars of the diagonal filter tests showed absolutely no signs of stepping along the edges, while both the Film and Video Resolution Loss tests were reproduced with no strobing or flickering. Even the shot of Raymond James stadium was displayed without judder and only a smidgeon of moire noise, revealing some excellent video processing at play.


DVDs also scrub up nicely, with our SD ”Avatar” disc enjoying clean, stable detail reproduction and natural-looking colours. It has a slightly gauzy quality and a few twitchy edges but nothing worth getting worked up about. We couldn’t discern any significant problems with the player’s audio capabilities either – HDMI-delivered movie soundtracks and two-channel music through our test amp are clear and dynamic.


So with everything in mind, what you have to ask yourself is whether the BD-HP90S is worth taking a punt on when other players from the likes of Sony, LG, Samsung and Philips offer comparable feature lists at similar (and in most cases, lower) prices. And with new and improved players from these brands on their way in 2011, is it worth holding out? We guess it comes down to how much you like Sharp’s elegant new design, but in our eyes that’s not quite enough to deserve being chosen over the Sony BDP-S570 or Philips BDP7500 Mk II, both of which get you much more for your money.


We’re pleased that Sharp has finally started to get its act together with its Blu-ray players. The BD-HP90S is a vast improvement on the company’s previous models – that optical disc team-up with Pioneer is obviously paying dividends – and nowhere are these improvements more obvious than the external design. Sharp has crafted one of the most stylish and distinctive players on the market, with a handy choice of installation options and a sleek, futuristic silver/black finish.


Sharp has also made dramatic improvements to the feature list. 3D is the obvious highlight, but it’s also great to see built-in Wi-Fi with DLNA networking, YouTube access and a wider range of supported formats being added. That said, it’s a shame we couldn’t test out these features properly, and it’s also disappointing that Sharp couldn’t have made the setup process easier. Some people might also be put off by the limited connectivity and ugly remote, but when it comes to performance, there can be no complaints – Blu-ray discs look stunning and even upscaled DVDs come out unscathed.