We can understand people resisting Blu-ray during its early days when prices were high, technology was evolving and the format war was still raging. But nowadays there’s no excuse for sitting on the sidelines, as there are loads of budget players on the market offering all the key features at affordable prices.

One such player is the Sharp BD-HP22H, which sees the company step back into the Blu-ray arena for the first time since last year’s BD-HP21H, a player that delivered a decent performance but fell down on features and user-friendliness. For this updated version, Sharp has naturally upgraded the spec to Profile 2.0, providing access to BD Live downloads.


Sharp has also tweaked the design of the old BD-HP21H to create a slightly more fashionable unit, with slimmer bodywork and an eye-catching ring of light in the centre of the fascia. The discreetly placed playback buttons on the left keeps the whole thing looking nice and minimal, although the tiny display panel makes the elapsed time hard to read. All in all the BD-HP22H is a pleasant looking player but it won’t turn heads like some of its rivals.

Being a budget deck, the rear panel is run-of-the-mill. Joining the crucial HDMI v1.3 port are component, composite, optical digital and stereo audio outputs, but no multichannel audio outputs. There’s also an Ethernet port for hooking up to the web, which is an inconvenient connection but getting built-in Wi-Fi on a sub-£200 player is as unlikely as a Labour victory at the next General Election.


You’ll also find a USB port on the rear, which is provided solely for storing BD Live downloads because the necessary 1GB of memory isn’t built in. That means you can’t play music, video or photos loaded onto USB sticks, which might not be crucial if you only want to play Blu-ray, but it’s nice to have the option – particularly when so many other budget players offer it. 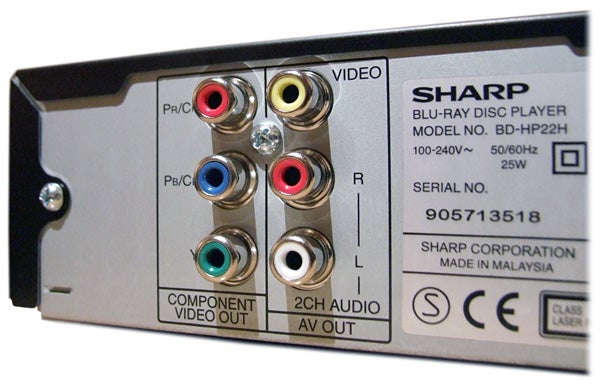 Also hugely disappointing is the deck’s limited list of supported media formats. In fact, it’s not so much a list as a single word – JPEG. And to make matters worse, you can only play your photos from CD-R or CD-RW and not DVD. So if you want to listen to MP3 or WMA files in the living room, or watch movies encoded in DivX, you should look elsewhere.


Thankfully the BD-HP22H offers most of the other essentials, including Dolby TrueHD and DTS HD Master Audio bitstream output and decoding. When decoded, the signals are sent from the HDMI port as multichannel LPCM, and you’ll need to select this option to hear secondary BonusView audio tracks. It can output 1080p Blu-ray pictures at 24Hz or 50Hz and upscales DVDs to 1080p, while Aquos Link theoretically makes it easy to control connected Sharp components using a single remote.

Like Sharp’s previous two players, the BD-HP22H also offers a Quick Start mode, so you don’t have to sit twiddling your thumbs while it boots up from standby. The trade-off for this is higher energy consumption when left in standby, but if you can put up with the eco-guilt and higher electricity bills then it’s worth using, as the deck fires up instantaneously.


Sadly though, that doesn’t translate into faster disc loading times. We sat patiently for one minute and seven seconds before ”Spider-Man 3’s” first video screen popped up, while ”Monsters Inc.” started playing after 50 seconds. This is pretty much the same as the HP21H, underlining the real lack of progress made by its successor.


Using the Sharp is generally a hassle-free process, thanks to the simple onscreen displays and thoughtfully laid out remote. The main menu takes up the whole screen and uses bright and colourful graphics, which look a bit old-fashioned but at least they’ll make Blu-ray newcomers feel right at home. 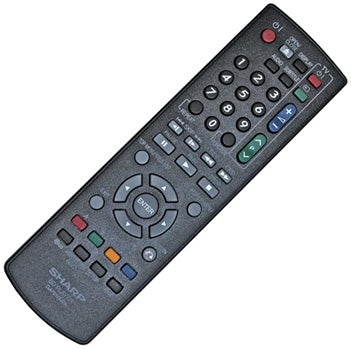 Select the Settings menu and a long list of options appears, covering all of the relevant bases including network settings, HDMI output preferences and front panel display options – the only thing you won’t find are any picture or sound adjustments. We like the way every menu option is explained in plain English when you highlight it.


The Sharp makes up for its problems elsewhere with an impressive picture performance, which can’t match the absolute purity of the Pioneer BDP-LX52 or even the Philips BDP7300, but is a lot better than you might expect from a budget player. ”Monsters Inc.” on Blu-ray looks absolutely stunning, with the Sharp rendering every last pixel of this beautiful 1080p transfer with aplomb.


The sharpness and clarity of the picture is entrancing, in particular Sulley’s wispy fur and the meticulously rendered textures of the buildings on Monstropolis main street. The shot of this street at the start of chapter 5 is beautiful, boasting strong shadow work and hard, crisp edges. Look closely and its budget price tag is betrayed by the slightest hint of noise in one or two areas of the picture, but it’s not a major problem.

Another key factor in this solid performance is the strength and purity of colours, which makes the ”Monsters Inc.’s” dazzling palette look suitably vibrant. Expansive contrast and solid blacks give it a reasonably filmic quality.


However, the Sharp doesn’t handle live action material with the same level of assuredness. We loaded up ”Children of Men” and the images seem fairly noisy, while the opening shots of ”I Am Legend” lack the emphatic precision that you get from some other players.

It does fairly well with the Silicon Optix HQV disc, removing nearly all traces of jaggies from the edges of rotating bars during the diagonal filter test, but the corner boxes on the Film Resolution loss test pattern exhibits significant strobing and there are obvious moire artefacts during the camera pan across Raymond James stadium.


The Sharp’s DVD upscaling capabilities are good rather than great, displaying our test discs with reasonable punch and vibrancy. And provided your sound system is up to scratch, you can get some excellent film sound quality out of this player, particularly when playing Dolby TrueHD or DTS Master Audio tracks. Although it’s not the most musical or insightful CD player we’ve ever heard, it’s fine for casual listening.


Many people will inevitably be sucked in by the Sharp’s rock-bottom price tag, but we’d advise caution before fishing out the credit card. Even at this low price you should expect basics like MP3 or DivX playback, perhaps even a USB port that can read typical multimedia formats, but the BD-HP22H lacks all of these things. And even if that doesn’t bother you, you can get better performance and faster disc loading from similarly priced players like the Sony BDP-S360 or the LG BD300 – although to be fair the Sharp’s pictures are still impressive.