The BD-HP21H is the successor to Sharp’s debut Blu-ray deck, the BD-HP20H – a generally impressive player that was hampered by its Profile 1.0 spec, limited format support and lacklustre DVD playback. Here’s hoping the follow up shows some signs of improvement.


It gets off to a good start with news that Sharp has upgraded the BD-HP21H’s spec to Profile 1.1, enabling you to enjoy BonusView features like picture-in-picture commentaries. But with so much BD Live content now available, and several Profile 2.0 players on the market for a similar price, it already makes the Sharp feel a little outdated. This is definitely a player for those who want to watch hi-def movies but aren’t fussed about interactive extras.

Like the HP20H, the HP21H also decodes Dolby True HD and Dolby Digital Plus into high-resolution PCM. Not only does this allow people with HDMI-equipped receivers without HD audio decoding to enjoy these formats’ higher sound quality, but it also lets the player mix the primary and secondary audio tracks on BonusView discs. As for DTS HD Master Audio and High Resolution Audio, they can both be transferred in bitstream form to an external receiver, but with PCM output selected, it only outputs the 5.1 core at 48kHz.


On the outside the player looks similar to the HP20H but does away with the unfashionable mirrored fascia in favour of a simple black finish, which is a wise move in our opinion. The front panel is plain and uncluttered, sporting only two buttons and a blue ring that can be turned off in the setup menu. It’s certainly not the most attractive Blu-ray deck out there but far from offensive. 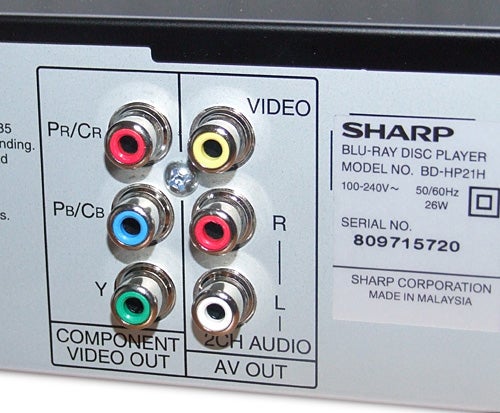 On the rear panel, Sharp has jettisoned many of the sockets found on the HP20H in a clear cost-cutting exercise. Gone are the 5.1-channel analogue outputs found on the HP20H, which rules out the possibility of listening to HD audio on legacy amps without HDMI inputs. Also missing are the S-video and coaxial digital audio outputs, neither of which is essential but it limits your options nonetheless. 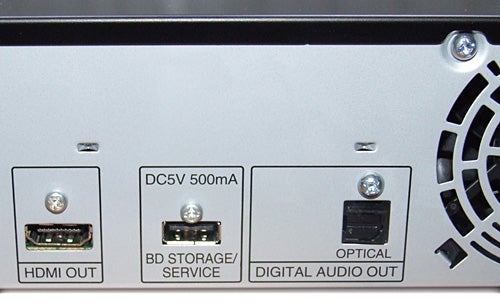 You will however find HDMI (v1.3), component, composite, stereo audio and optical digital audio outputs, as well as a USB port which is used for service updates and to provide storage for Virtual Package content found on some BonusView discs. There’s no Ethernet port though, ruling out any chance of an upgrade to Profile 2.0.

One of the highlights of the HP20H was the Quick Start mode, which thankfully is also included here. It dramatically slashes the amount of time it takes to load up a disc but uses a lot more power in standby than usual. Other features include DVD upscaling, support for DVD+RW/+R, DVD-RW/-R/-R DL discs, JPEG playback from CD-R/-RW, Aquos Link HDMI CEC, x.v.Colour support and 1080/24p output – but the lack of MP3, WMA and DivX playback is a crying shame.


The setup menu looks exactly the same as the one found on the HP20H, which is definitely a good thing. Blu-ray newcomers will feel immediately at home thanks to the large graphics, clear, legible text and helpful descriptions of what each option does. The menu covers every base imaginable, from HDMI resolution and audio output to software updates and Aquos Link settings.

One new addition to the menu, brought about by the upgrade from Profile 1.0 to 1.1, is the ability to turn secondary audio for BonusView discs on and off. But unlike most other players, the menu explains the various audio implications when the secondary audio is turned on (in this case, the HDMI output automatically outputs in PCM) and the audio options change accordingly.


Sharp has also revamped the HP20H’s remote, getting rid of the flap at the bottom and condensing the buttons into a simple, intuitive layout. It features dedicated buttons to access the pop-up menu and change the HDMI resolution, plus there are separate buttons to control a Sharp TV. 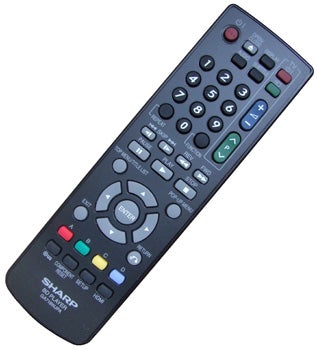 The deck’s Quick Start mode makes it ultra quick to boot up a disc. With this mode turned on, it takes on average 15 seconds to get from standby to the first menu, compared with one minute when Quick Start is turned off, making it well worth the extra electricity needed to use it. In other respects the deck is agreeable to use, sailing through pop-up menus and scanning though discs without excessive delays, plus the onscreen menus are easy to read.


It’s also pleasing to discover that the BD-HP21H delivers superb picture quality with Blu-ray discs, comparing favourably with other similarly priced players on the market like the Samsung BD-P1500 and Panasonic DMP-BD35. We loaded up ”Indiana Jones and the Kingdom of the Crystal Skull” and were immediately blown away by the sharpness of the picture, which is the biggest and most satisfying advantage Blu-ray has over DVD. But watching a crisply transferred big budget film like this really rams the point home, particularly when playing it back on the incredible Pioneer KRP-600A plasma.

Examples of the Sharp’s excellent detail handling is everywhere. The stubble and creases on Harrison Ford’s craggy face, the tiny writing scrawled on Oxley’s notes, the texture of clothing, the dust and leaves on the floor of the tomb – it’s all conveyed with a pin-sharp crispness that almost makes it worth the price tag alone.


But there’s so much more to admire about its hi-def pictures, particularly the image clarity during dark scenes. It helps when you’re using a plasma screen as proficient with blacks and shadow detail as the 600A, but the Sharp gives it some strong source material to play with. The scene in which Jones and Mutt explore Orellana’s tomb is an absolute master class – the shadows look truly deep and solid but the spider webs, skeletons and fine detail on the walls remain clearly defined at all times. It lends the image a depth and three-dimensionality that really suck you into the scene.

Colours look vibrant too, best demonstrated during bright outdoor bits like the (frankly ridiculous) jungle and waterfall scenes. It’s topped off by fluid 24Hz motion, razor sharp edges and a lack of noise. We also tried some of the test patterns on the HQV Benchmark Blu-ray disc and the Sharp handles the Film Resolution Loss test (a panning shot of an empty stadium) with pleasing stability, and keeps jaggies to a minimum on the rotating bars pattern, but neither is reproduced with the same level of assurance as the Pioneer BDP-LX71.


Upscaled DVD playback isn’t much better this time round, with ”Gladiator” looking as scruffy and soft as it did on its predecessor. Some over sharpening is evident on edges, noise fills the skies over the battlefield and it struggles to suppress jaggies on diagonal lines. It also struggles with fine detail on test patterns.


In the audio department, the Sharp is at its best playing back Indiana Jones’ Dolby True HD bitstream through a suitably equipped receiver, in this case the Onkyo TX-NR906. The high-resolution sound is clean, expansive and detailed, adding a great deal of drive and vitality to the films’s big action scenes. Stereo CD playback through the analogue outs lacks sophistication but it’s adequate for undemanding tastes.


Reviewing the BD-HP21H leaves us with a strong sense of déjà vu, as it shares all the same strengths and flaws of its predecessor except with BonusView support thrown into the mix. There are plenty of plus points, such as the excellent Blu-ray picture quality, the frustration-free operating system and the handy Quick Start mode, but the lack of BD Live, MP3/WMA/DivX support, DTS HD Master Audio decoding and poor DVD upscaling are its undoing once again. That said, at £150 online you might be willing to make a few sacrifices…