The world of AV technology is never standing still. It’s always innovating and changing. And that process of innovation and change seems to have kicked into overdrive at the moment – with two rather pleasing results.

First, of course, there always seems to be some weird and occasionally wonderful new technology around to give us journalist types plenty to write about. And second, products seem to be going through some really quite dramatic price cuts in the course of their increasingly short lifespans, as replacement models almost continually loom on the horizon.

This latter phenomenon can certainly be seen at work with Sharp’s 46X20E. This 46in LCD TV started out life at around the £1,300 mark only a few months ago, but incredibly we’ve just found it selling online today for under £730. Let’s just repeat that: 46in of LCD pictures from a respected brand for less than £730.

Needless to say, this sort of value equation gets the 46X20E off to a great start as far as this review is concerned. But with Sharp TVs proving a little hit and miss of late, is its price the only thing the 46X20E has in its favour? 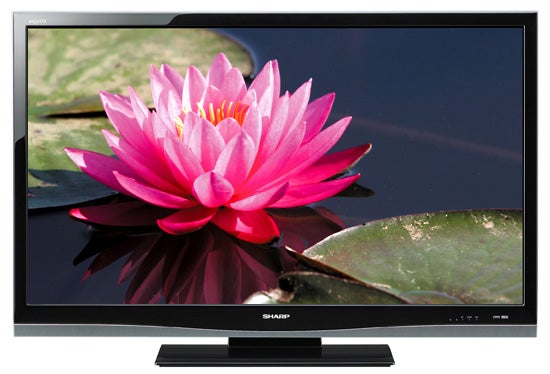 Nope. For if nothing else it’s quite an attractive TV thanks to its slender, gloss-black bezel and silver ‘wave’ along the bottom edge. We’re a bit peeved to find Sharp calling the 46X20E ‘Slim Line’ when in fact it’s nothing like as skinny round the back as true ‘ultra slim’ sets such as Hitachi’s UT32MH70U and JVC’s 42DS9. But at least its bezel width is genuinely narrow, enabling the 46X20E to potentially fit in a space where you might have imagined only a 42in TV could reside.

In terms of connections, the 46X20E passes muster without exactly blowing us away. Which is to say that it manages three HDMIs built to the v1.3 specification, as well as a dedicated D-Sub PC port, an RS232 control jack for easy integration into a wider home cinema system, and a digital audio output. In an ideal world some sort of multimedia port – SD card slot, USB input – might have been nice, too. But the 46X20E’s lowly price makes this pretty easy to forgive and forget.

As with pretty much every screen bigger than 42in we’re seeing these days, the 46X20E sports a Full HD resolution for scaling-free HD playback. It’s also got a fast 4ms response time, and a handy-looking 10,000:1 contrast ratio achieved via a dynamic backlight system that dims the screen’s light output during dark scenes to boost black levels.

There are a number of LCD screens around quoting higher dynamic contrast ratios, but the 46X20E’s key ‘native’ (achieved with no dynamic backlight) contrast ratio of 2,000:1 is actually up there with the best.

More potential good news for the 46X20E’s pictures comes from the set’s use of Sharp’s tru-D anti-judder processing technology. It’s just a shame that this processing element is not, sadly, joined by any 100Hz system for fighting LCD’s problems with resolution loss when showing moving objects. Though the onscreen menus do contain an ‘Action’ mode that reckons to do a similar sort of thing – more on this later.

Also present in the 46X20E’s tidy-looking if rather long-winded onscreen menus are a set of reasonably thoughtful picture presets, and the increasingly inevitable option whereby the TV can adjust its picture settings in response to your room’s lighting conditions.

One final trick up the 46X20E’s sleeve that we love to bits is its ability to label its HDMI inputs automatically using data provided by many HDMI sources. So if you’ve got a Sky HD box connected to HDMI one, this input is automatically relabelled ‘Dual HD/PVR STB’, while Xbox 360s and PS3s also trigger an automatic input name change. Cool. 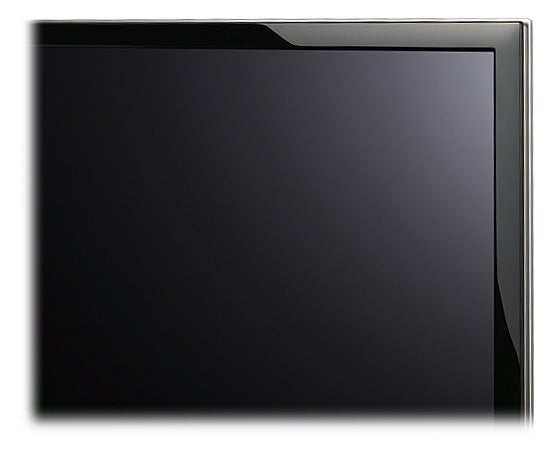 Starting our tests of the 46X20E with ”National Treasure 2” on Blu-ray (look, it’s got good picture quality, OK?!), we were for the most part very impressed by what the set can do with HD source material. The pixel density generated by its Full HD resolution, for instance, helps it deliver the fine colour blends on show in the subterranean city of gold with real finesse. Similarly, the levels of clarity and sharpness evident during exceptionally textured sequences like those in the Library of Congress are excellent.

The 46X20E also delivers some of the deepest black levels around in the LCD world during ”NT2’s” underground sequences, with surprisingly little of LCD’s customary greyness to besmirch the film’s darkest corners. We didn’t find ourselves particularly distracted by any OTT activity from the 46X20E’s dynamic contrast system either; in fact, the image can look unusually stable.

Colours are also very expressive, with rich saturations and plenty of dynamism, while noise levels are at a premium, especially if you do the sensible thing and watch HD sources using the set’s ‘Dot By Dot’ mode. This allows pictures to appear without any rescaling processing.

It’s worth pointing out that the above results were obtained using the TV’s Movie image preset. Selecting any of the others while watching films results in various different issues – reduced black levels, over-bright colours, one or two signs of noise – and so they’re best avoided. In fact, the only other mode we’d bother with under any circumstances is the game mode, which reduces the image processing going on for a faster response to a console’s time-sensitive video signals.

While generally good, though, the 46X20E’s HD performance certainly isn’t perfect. Colours, for instance, can look a touch unnatural during dark scenes. Also, the lack of 100Hz means that while relatively static HD images look exceptionally sharp, things do soften up rather during ”NT2’s” action sequences.

To be fair, the Action mode can, as billed, help reduce this motion blur. But the mode also causes the TV to flicker in a way not dissimilar to that seen with old 50Hz CRTs, and so I preferred to leave it set to off.

The bad news continues with the 46X20E’s standard definition performance, which is at best fair to middling. Standard def images tend to look rather soft for a start, especially where skin tones are concerned, meaning that people can look really quite mannequin-like at times. 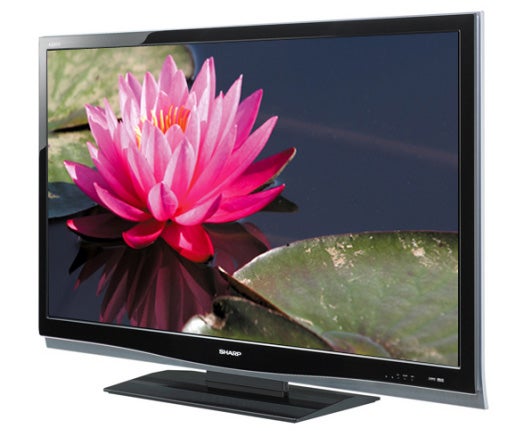 The colour toning flaws noted on occasion during HD viewing are exacerbated with standard def fare too, and there’s a tendency for edges in standard def images to look rather jagged and over-stressed. Oh well; at least the 46X20E’s smaller screen size means that it doesn’t tend to expose its standard def shortcomings quite as ruthlessly as its bigger, 52in sibling.

The 46X20E’s sound, meanwhile, follows the trend of many other Sharp TVs we’ve seen recently in sounding OK with untesting material like a normal day-time TV-style show, but short of power and dynamic range when watching an action film.

There’s no hiding the fact that the 46X20E’s performance is something of a mixed bag, especially with standard definition. But it’s also impossible to ignore the set’s new, remarkably low price. In fact, in the end the price wins the day with us, as we just can’t stop feeling that getting hold of 46 inches of always decent, sometimes outstanding LCD pictures for under £730 really does look like an opportunity too good to pass up.