Although I’ve now tested quite a few LED-backlit LCD TVs, one thing has been conspicuously absent from the LED ‘canon’: small screen sizes. Whether it’s because manufacturers see LED as a premium technology, or because making LED backlighting work well on smaller screens is difficult, the simple fact is that so far direct LED-backlit TVs have been 40in or more.


So it’s with some interest that I chased Sharp down for a sample of its 32LE600E. As its name suggests, this TV is just 32in across, yet it definitely boasts Sharp’s latest direct (rear- rather than edge-mounted) LED lighting system. 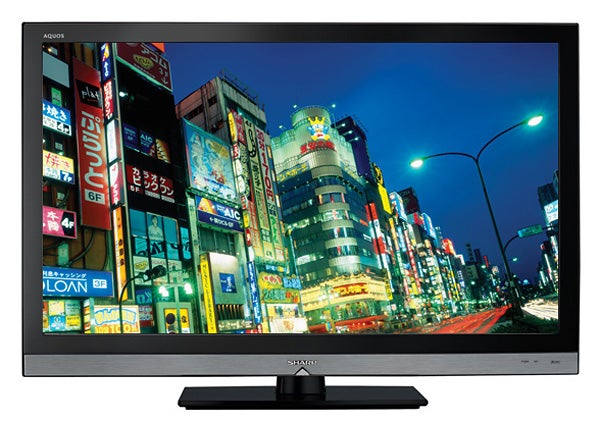 What’s more, its price suggests that LED’s tendency to go with larger screens isn’t down to technical difficulties. For at just £450, the 32LE600E would look cheap even for an ‘ordinary’ LCD TV, never mind an LED one. In other words, if any TV has the utilitarian size and recession-friendly price to really make LED-lit TVs mainstream, it’s this Sharp.


Oddly I also think Sharp’s design for its LE600 LED range sits more comfortably on this 32in model than it does on any of the brand’s larger screens. The silver metallic band across the screen’s bottom edge, accented by a bold little triangular motif under the Sharp logo, has always presented a nice contrast against a reasonably slender gloss black bezel. But because the 32LE600E is smaller, you don’t notice so much the rather plasticky finish that lies beneath the surface gloss.


The 32LE600E is respectably rather than spectacularly connected for its price level, meaning that it has three HDMIs (one side-mounted) rather than four, and while it does have a D-Sub PC port for multimedia use, it doesn’t follow the growing trend towards including a USB port for playback of picture files from USB storage devices. 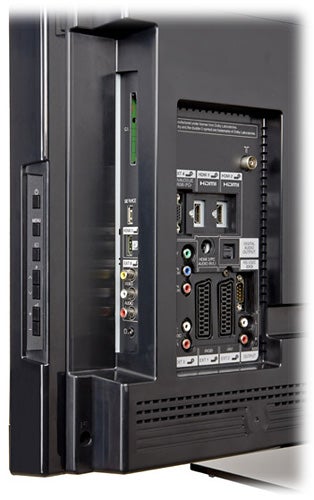 There’s no getting away from the fact, either, that the 32LE600E isn’t spectacularly well featured, once you look beyond its ground-breaking LED backlighting. There’s no 100Hz motion processing, for one thing – in fact, there’s very little major video processing at all aside from a ‘Brilliant Colour’ system for boosting colour saturation.


Hopefully there will at least be something pretty clever going on in terms of driving the local dimming properties of the LED array behind the screen.


Local dimming, for those of you not familiar with the term, describes the way that direct LED TVs can control clusters of LED lights individually, so that you could potentially have extreme brightness in one part of the picture, and near total blackness (with the LEDs off) in another. Obviously this fact has a potentially profound impact on a screen’s contrast potential versus ordinary LCD lighting systems, where the whole picture, bright and dark bits alike, is illuminated by a single, always-on light source.


With this in mind we’d like to be able to tell you Sharp’s contrast ratio measurement for the 32LE600E, despite such figures being notoriously unreliable. But rather unhelpfully Sharp merely declares that its TV’s contrast ratio is ‘Mega’. Sigh. Presumably this is their way of saying it’s so massive it’s not worth measuring, or something.

The 32LE600E uses white dimming rather than the much costlier RGB dimming sported by a handful of high-end LED TVs, meaning it won’t be able to produce as wide a colourscape. But as I’ve noted before, the performance level of white LEDs seems to my eyes more in keeping with the limitations of today’s video standards – even the HD ones. And anyway, white dimming seems a fair price to pay to get LED’s picture quality advantages so cheaply.


Most TVs these days claim some sort of planet-saving eco feature or other. But the 32LE600E’s LED nature gives these claims more genuine clout than usual, for it apparently uses 40 per cent less energy than a normal CCFL-lit LCD TV. This actually makes the set look even better value when you consider the reduction in electricity bills you should enjoy over time. 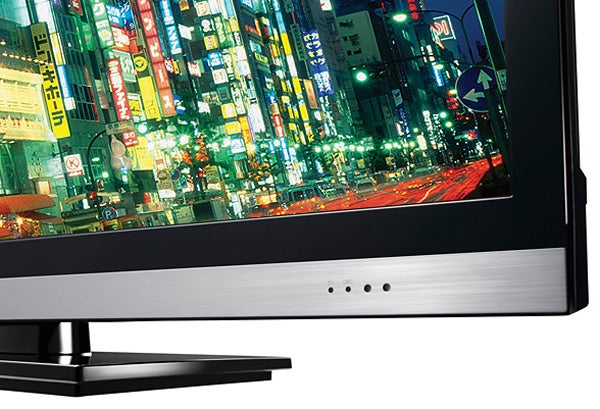 Regular readers will know that while Sharp’s new and affordable LED TV range have certainly delivered on much of the usual promise of LED technology, they haven’t completely won me over to their cause. And so I guess it’s no surprise to find that the 32LE600E doesn’t completely rock either. But at the same time, I would argue that it’s in some ways still the most attractive proposition I’ve seen from the range so far. The main reason for this is that the familiar LED strengths that have stood out on Sharp’s larger LED TVs look all the more striking here because of their 32in context.


For instance, while many 32in TVs seem to struggle for black level response versus their larger counterparts, the 32LE600E delivers dark picture areas that outclass those of any other 32in TV I can think of – even Samsung’s excellent 32B650. What’s more, it does this while creating only marginal traces of the haloing that was once such a factor with local dimming. In other words, the light ‘aura’ around bright objects set against dark backgrounds is generally well controlled, with only very subtle and occasional examples catching my attention. 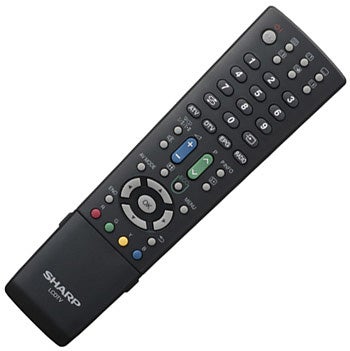 The local dimming situation also helps the 32LE600E’s pictures retain a great sense of dynamism during dark scenes, as the TV is able to simultaneously show deep blacks and bright whites within the same frame in a way a standard LCD TV never could. Again, this asset of the 32LE600E’s pictures is particularly striking at the 32in level, where dark scenes tend not to be quite as dynamic looking as they can be on larger screens.


The 32LE600E’s LED lighting additionally helps it produce exceptionally vivid, vibrant colours – again in a way rarely if ever seen elsewhere in the straight LCD world. In fact, I had to rein the colour palette in quite drastically no matter which of the provided picture presets I used, otherwise skin tones had a tendency to look too rosy, while reds could become overpowering.

The fact that I had to tinker considerably with all of the TV’s picture presets is actually rather annoying. For while it’s fair enough to have one mode that pushes colour and brightness hard in order to stand out in a shop environment, it isn’t helpful at all for all the presets to appear to have been designed with showing off in mind.


It’s also true that, no matter how hard I tried, I never completely managed to stop skin tones from occasionally looking a little waxwork dummyesque, especially with standard definition sources.


Another issue that may affect some people with small living rooms or seating positions down the sides of their room is the 32LE600E’s very limited viewing angle. This finds contrast plummeting dramatically if you have to watch from any angle of around 35 degrees or more. 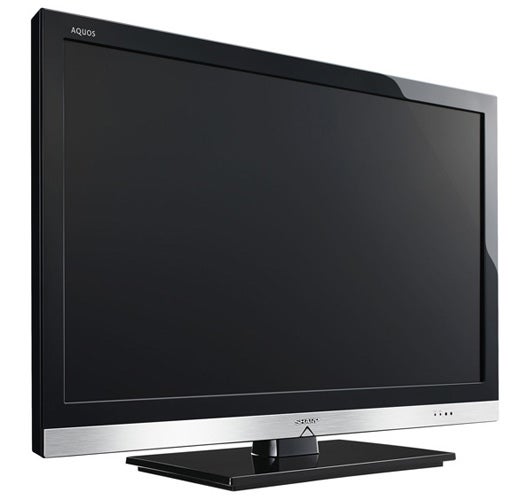 One further slight flaw is that HD pictures such as the recent emotionally charged Superbowl in HD on Sky don’t look quite as pin-sharp as they do on some rival 32in models. This is a marginal point; I’m certainly not suggesting that the 32LE600E’s pictures look actually soft or anything. But people who like their HD to be all crisp and harsh might not approve.


It doesn’t help the 32LE600E’s sharpness that the picture tends to lose clarity and even smear a touch at times when things get moving. It’s pretty much impossible for anything to cross the screen, or for the camera to pan, without obvious resolution being lost.


To be fair, the extent of the smearing isn’t shockingly bad, and over time you sort of start to acclimatise to it. But it’s still an impossible issue to ignore now that so many rival brands are doing such a good job of suppressing this inherent LCD problem.


Sonically, the 32LE600E is par for the 32in LCD TV course. And so it sounds absolutely fine with your typical daytime TV ‘chatshow’ fodder, but can sound a bit compressed, one-dimensional and flat when pushed harder by any good Hollywood action scene.


The 32LE600E does enough to remind us of why LED lighting is such a hot property right now – and is certainly likely to stand out on the crowded shelves of your local electrical store on account of its fearsomely intense colours, high brightness and deep, rich black levels. In fact, these strengths will very likely be enough in themselves to make many people who buy a 32LE600E happy punters. However, Sharp definitely needs to tackle some core response time problems before its affordable LED TVs can bag one of our Recommended badges.