Without wishing to get this review off on the wrong foot, it’s impossible not to preface it without pointing out that the LC-32GD8E is about to become rather a ‘second tier’ product in Sharp’s current LCD range thanks to the arrival of the brand’s all-singing, all-dancing, new Full HD ‘XD1E’ range, complete with ace-sounding features and specifications oozing out all over the place.


But of course, the XD1E’s bag of tricks (which we’ll be running our eye over in the next two or three weeks) come at a price. So if you’re one of the masses for whom spending more than 600 quid on a telly is just too much to justify, then the 32GD8E is the Sharp TV for you. Provided, of course, that it’s any cop.


It’s pretty enough, that’s for sure. Sharp has dispensed with its once-cool-but-now-rather-long-in-the-tooth penchant for ‘titanium’ finishes in favour of a much more ‘now’ black bezel with silver trim and speakers that should look a treat in any living room. 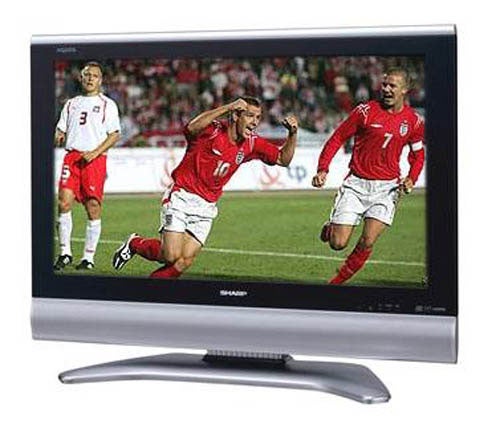 The good first impressions grind to a halt with the 32GD8E’s connectors, though, thanks to the provision of a measly one HDMI socket and Sharp’s decision to make the provided D-Sub PC port double up as a component video input (via a provided component-to-D-Sub adaptor). Not being able to simultaneously connect either two HDMI sources or, say, a PC and an Xbox 360 console, are limitations that we really think might affect even the least ambitious TV buyer at some point or other.


Elsewhere the TV provides a pair of Scarts; a CI slot you can use to add subscription TV services to the core channel roster of a built-in digital terrestrial tuner; and oddly, given the lack of ambition shown elsewhere, an RS-232C port which apparently lets a PC take control of the TV in a system install situation.


One or two of Sharp’s reasonably recent LCD TVs have conspicuously lacked any electronic programme guide back-up for their digital tuners. But happily this has been comprehensively rectified for the 32GD8E, with a full 7-day EPG that’s actually better presented than most and allows you to program up to eight timer events just by selecting desired shows from the listings.

Other features, though, are rather thin on the ground. The set is HD Ready thanks to a native resolution of 1,366 x 768; there’s a black level booster; you can manually switch between interlaced and progressive playback depending on what best suits your source; and there’s a film mode that adjusts the TV’s frame rate handling to better suit film as opposed to video sources.


If we’re honest some of these features really aren’t that interesting or unusual – but with little else to report, we’re forced to take our ‘feature thrills’ where we can find them!


In the interest of fairness, though, it probably should be said that even just having HD Readiness and a digital tuner is arguably pretty decent for a 32in LCD TV costing as little as £564.


Happily our desire to be fair to the 32GD8E increases as we set about assessing its really quite good picture performance. Particularly striking for such a cut-price screen is the richness of its colours. Bright, colourful fodder – like seemingly any Xbox 360 game from Rare! – just explodes off the screen, grabbing your attention and holding it in a way that blows away the rather muted palette of most budget 32in rivals. 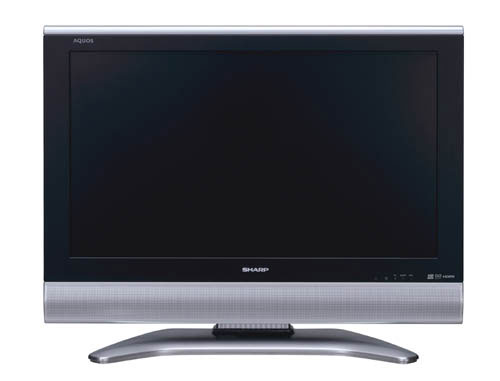 Even better, the extreme vibrancy we’re talking about has not come, as it so often does, at the expense of tonal naturalism. This can be seen in the complete confidence and authenticity with which the 32GD8E presents the multitude of tricky skin-tones on show during Paul Thomas Anderson’s Magnolia.


Our love of all things high definition also revels in this Sharp’s handling of fine detail. It leaves no pixel of HD data unshown, and in doing so makes HD sources look for the most part stunningly sharp and crisp. What’s more, the 32GD8E even manages to retain a reasonable sense of sharpness while showing standard definition – a talent precious few LCD rivals can honestly boast. Impressively this ability with standard definition is delivered without seemingly anything like as much overt high-tech image processing wizardry as we’re used to seeing on screens from rival brands. Hmmm…

Some of the crispness we’re talking about can be laid at the door of the 32GD8E’s motion handling, which suffers far less with LCD’s infamous smearing problem than you’ve a right to expect of such an affordable TV.

Oddly, the 32GD8E’s black level performance both wraps up the TV’s strengths and introduces its weaknesses. On the plus side, dark scenes look black enough to ensure that they possess plenty of dynamism and scale. Yet at the same time bits that should look black tend to adopt a slightly bluish hue that occasionally during dark scenes counters the generally natural colour toning described earlier. 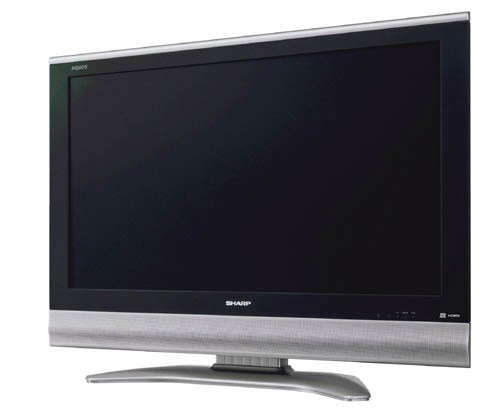 Our other main gripe with the 32GD8E’s images is that something about the aggressiveness of their presentation seems to slightly exaggerate MPEG noise in digital sources, especially its own built-in digital tuner. If we were being really picky we might say a touch more brightness wouldn’t have gone amiss either – but the vivacity of the colour palette at least provides some pretty tasty compensation for this.


The 32GD8E continues its solid form with its audio, producing smooth and believable vocals, surprisingly healthy dollops of bass, and unusually rich treble detailing free of the sort of harshness that’s common in the budget zone. Our only concern arises during loud action scenes, as a slight lack of raw power causes things to start sounding a bit muddy.


Yes, the LC-32G8E lacks the balls-out glamour of Sharp’s upcoming new LCD stars, and no, its performance won’t give the very best LCD TVs in town sleepless nights. Yet placed within the context of its hugely reasonable sub-£600 price point, it’s a budget option that you’d be foolish to ignore.