In today’s style-conscious climate, the way in which you display your flatscreen TV is almost as important as the TV itself. As a result AV furniture is getting more and more eye-catching, as manufacturers attempt to emulate the cutting-edge characteristics of your average plasma or LCD set.


But a handful of manufacturers have taken the idea to the next logical step by integrating home cinema components into the stand itself, which not only keeps potentially ugly boxes neatly hidden away but also leaves more room for your other kit – and let’s face it, with Blu-ray players, AV receivers, digital TV boxes, video recorders and games consoles vying for space under your TV, you need all the help you can get.


All of which brings us neatly to Sharp’s AN-PR1500H, a home cinema rack with a built-in DVD player and 2.1-channel speaker system. It’s a neat concept, and with its glossy piano-black finish we can imagine it going down really well with owners of similarly styled TVs (which is pretty much all of them these days), although its bulky, blocky design means it’s not the most elegant piece of AV furniture we’ve ever laid eyes on.

Assembly is easy. Once you’ve lifted it out of the box (a job we recommend asking a friend to help with) the two subwoofers flip down to form the stand’s legs, plus there’s a wooden shelf that sits between them and a reinforced glass top cover for your TV to sit on – the whole assembly process is over in ten minutes without a screwdriver in sight.


On the front is a large panel that houses the DVD loading slot (the only indication of the player inside), a collection of buttons (including play, stop and volume) and two microphone inputs, revealing that the sound system can also be used as a karaoke machine (shudder). It’s joined by a USB port and in the centre is an informative display that shows the selected source, chapter number, elapsed time and the current audio settings.

Take a trip round the back and you’ll find a comprehensive array of sockets. Audio inputs are generous and include two optical digital ports, a coaxial input and three analogue inputs. They’re joined by optical digital output and a decent selection of video outputs, including HDMI, SCART, component, composite and S-video.


A decent selection indeed, but it’s not all good news – the player’s built-in upscaler only goes up to 1080i, so if you plonk a Full HD set on top and want to feed it 1080p pictures, you’ll have to find space for another DVD player underneath which would completely defeat the object. Also disappointing is that there’s no provision for rear speakers should you want to upgrade to a full 5.1 system.

Elsewhere, the USB port is a nice inclusion, as it enables you to plug in a memory device containing MP3, WMA and JPEG files and play them through the system. It also plays the above formats and DivX (v6 and VOD) from CD-R and CD-RW discs.


The system happily plays back Dolby Digital and DTS soundtracks, and to compensate for the lack of rear speakers Sharp has included Dolby Virtual Speaker, which attempts to replicate the effect of a true 5.1 system. There are two DVS settings – Wide and Reference – while Dolby’s Audistry technology adds four more modes: Sound Space, which widens the soundstage, Natural Bass, Intelligent Volume (which limits loud sounds and boosts quiet ones) and Mono to Stereo, which does what it says on the tin. 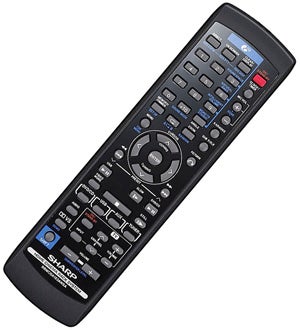 As if that wasn’t enough, there are five other EQ modes (Cinema, News, Music, Sport and Night), while the Bass and Treble levels can be individually adjusted and there’s a separate volume for the subwoofer from -5 up to +5. We’re also impressed to find a range of picture adjustments in the setup menu, enabling you to alter brightness, contrast, hue and saturation.


The system’s onscreen menu is one of those ugly generic jobs found on countless cheap DVD decks, but it functions adequately and puts all of the options within easy reach. However, the remote is horrible, hindered by worse overcrowding than the Tube at rush hour. Tiny buttons and poor placement compound the problem but the final insult is that you have to hold down the shift key to access some functions. Yuck.

To check the system’s audio credentials, we loaded up the tried and trusted Omaha Beach landing scene from ”Saving Private Ryan” and were pleasantly surprised by its blistering reproduction of this scene. It delivers the sort of robust, room-filling sound that you don’t get from most budget systems, let alone TV stands.


Loud, fiery bass grabs you from the get-go, with the relentless explosions shaking you to your very core, while the crisp, well-controlled treble lends real snap to the bullets that fire around the soundstage. Dialogue has no trouble cutting through the cacophony, and what’s really pleasing is that the rack’s sturdy build quality doesn’t allow for any rattling or flabbiness when the going gets really tough at the bottom end. 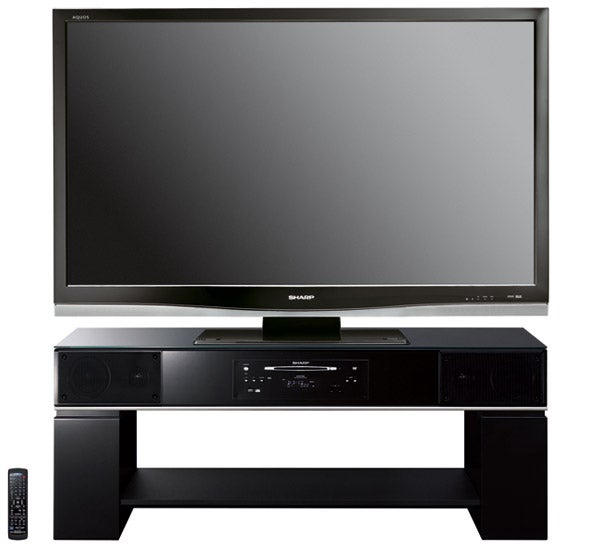 The only real flaw is its inability to deliver a wide-reaching soundstage – all of the action seems confined to the space in between the speakers with no real sense that the surround effects are being projected far enough. There is some width but not enough to make this a viable substitute for true surround sound.


As for picture quality, the Sharp does a reasonable job with a good quality transfer like ”Gladiator” but can’t keep noise completely at bay, which can be seen fidgeting around in large patches of colour. However, colour saturation is strong, skin tones look natural and there’s a fair amount of detail in the picture.


The AN-PR1500H is a clever concept well executed, allowing people looking for a TV stand and home cinema system to kill two birds with one stone and cut out all the hassle. Although the chunky design won’t be to everyone’s taste, the excellent sound quality certainly will be, plus there’s a decent range of features and extensive connections. On the downside, the remote is shocking and its upscaling limitations are a turn-off, but on the whole Sharp has done a good job.