For the most
part, Sharp is having an alarmingly quiet IFA.

Sure, it’s
trying to put on some sort of show with a trio of huge multi-screen ‘video walls’,
including a new ultra-bright one designed for outdoor use. But as impressive as
these showcase video wall exhibits might look, they are, of course,
predominantly aimed at the commercial digital signage market rather than your
average home user. So far as actual products you might soon be able to buy at
your local electrical store are concerned, Sharp’s IFA cupboard is so bare that
you can’t help but wonder about the brand’s European TV future.

The only
‘mainstream’ glimmer of innovation on Sharp’s stand concerns a rather cute 20in
portable LCD TV – complete with carry handle and pink, white and black colour
options – which can run for two hours on built-in batteries and have HD content
streamed to it from a little hub situated somewhere in your home. In
other words, it’s a completely cable-free portable TV, which really does strike
us as a very good idea. While these screens are available in Japan, though, it
came as no real surprise to learn that Sharp isn’t sure whether to launch them
in the UK as well.

Just when it
seemed there was nothing to grab our attention on Sharp’s IFA stand, though, we suddenly clocked the 85in LCD
TV stuck rather unglamorously into an unassuming bit of wall some distance from
the ‘video wall’ showpieces. 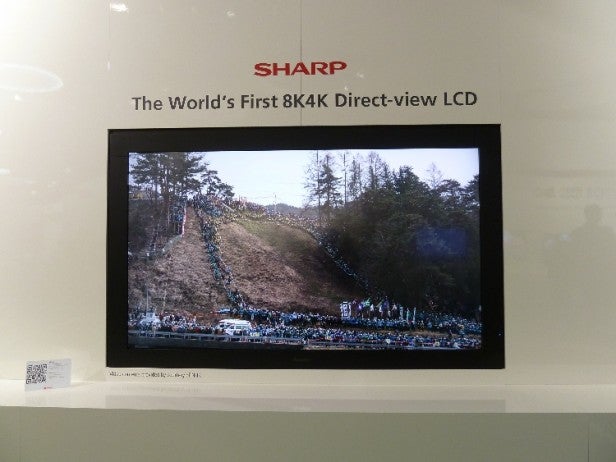 Closer
examination revealed that this screen was not only a ‘world first’, but a world
first in an area that’s very close to our hearts: video resolution. For
remarkably, thanks to ‘pixel shrinking’ techniques Sharp developed during the
creation of its Quattron TV technology, this 85in showstopper is the first
TV to carry an ‘8k4k’ pixel count. This is a pretty mind-blowing achievement at
a time when we still find ourselves getting almost pathetically excited by
the handful of screens and projectors that can deliver a 4k2k (4000ish x 2000ish) pixel count.

To put Sharp’s
achievement with its 85in ground-breaker into perspective, while a normal,
current ‘full HD’ screen carries 2,073,600 pixels, an 8k4k screen somehow
manages to fit into its screen area in excess of 32,000,000 pixels.
Crazy – but in a good way.

With even 4k2k
source material still tough to find outside of Japan, we really didn’t
expect Sharp to be able to show off its groundbreaking screen’s full capabilities with any
genuine 8k4k images. But remarkably it could, thanks to some footage shot by
the ever-innovative Japanese broadcaster NHK.

Showing a
variety of Japanese content – including footage of the bonkers Suwa Pillar
Event, where a bunch of nutters ride a giant tree down a steep hill with more crazy people running alongside – the quality of the native 8k4k material
on Sharp’s screen almost defies description. You could see levels of
detail in people’s faces, the ground, the tree, or actually any part of the
image that the event being shown felt so tangible you felt you could
just step forward and join the madness. Never before, in other words, has
the idea of HD TV giving you a ‘window on the world’ being so accurately
realised.

The complete
absence of noise in the 8k4k images – even with our faces so close to the 85in
screen that our noses were practically touching the glass – is also a marvel to
behold. So tiny are the pixels in the screen, moreover, that our
face-pressed-to-screen antics also failed to reveal any distracting sense of a visible
pixel structure in the picture – something it’s possible to discern even on
4k2k displays if you get up really close to them.

The extra
resolution also helps the 8k4k screen deliver a whole new level of finesse when
it comes to colour blends, and ultimately delivers an image of such profound
accuracy and purity that it feels like you’re watching 3D even though you
actually aren’t.

Now for the bad
news. For while NHK is, remarkably, filming footage from the London Olympics
next year in 8k4k, the channel isn’t expecting to start experimental 8k4k
broadcasts until 2020, with open broadcasting not expected until around 2025! And heaven only knows how far behind that date the UK’s broadcasters will be.

While we might
have quite a wait on, then, before screens like Sharp’s 8k4k groundbreaker are
either practical or available in any remotely affordable way, Sharp’s
unexpected world-beater has certainly reminded us in no uncertain terms that while
other image technologies like 3D might currently be snaffling most of the AV
headlines, sheer, beautiful resolution will always be our picture quality
‘constant’.