Followers of AV tech will know that Moth-Eye TV technology isn’t new. Philips has used the special nodular moth-eye filter extremely successfully for a couple of generations of its flagship 9000 series TVs (including the Philips 46PFL9707) to greatly boost their contrast by soaking up more ambient light reflections than normal LCD TVs.

While the technology was co-developed with Sharp, though, we’ve never seen the Japanese brand use it before. Until now. For Sharp has decided to remind us of its part in moth-eye in fairly spectacular fashion at the CES by employing it on a 70in TV. And not just any 70in TV either, for this particular Aquos model also happens to have an Ultra HD 4K native resolution…

As soon as we got close to this new Aquos monster it stopped us in our tracks. For in our opinion its moth-eye/4k combination helped to make it one of the stand-out visual treats of the entire CES show.

This is partly, of course, because of the never-gets-old thrill of seeing Ultra HD pictures blow the normal HD competition out of the water with their incredible detail levels and flawlessly smooth finish – the impact of which is merely emphasised by the set’s 70in screen and use of some cunning demo footage featuring plenty of 4k-emphasising stuff like crisp snowscapes and shots of grass, trees and brick buildings.

Motion, too, looked surprisingly clean and polished considering this TV uses LED technology, and while contrast levels don’t look to be in the same realm as those of Philips’ moth-eye sets (which use direct rather than edge LED lighting), they still seem higher and more uniform than they are on many of Sharp’s non-moth-eye panels.

The real ‘killer app’ of the way the moth-eye technology works with the 4k native resolution, though, comes in the way it soaks up pretty much all of the screen’s reflections. Even though the 70in set was being shown in a relatively bright corner of the CES, its screen displayed not a hint of reflected light or shadow. This doubtless helps its contrast as noted earlier, but crucially it also removes one of the most common and yet also most jarring barriers between you and what you’re watching. 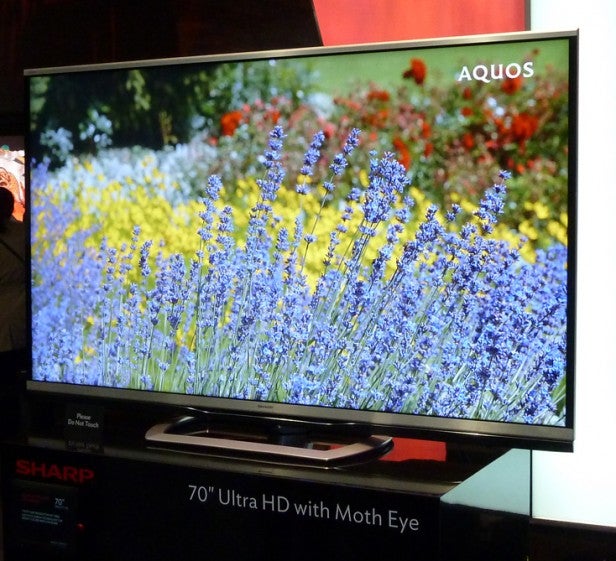 Any time you see something reflected on a normal TV screen, it breaks your connection with the image being shown, making you feel less immersed in it. So by removing this barrier and then presenting a picture with a native 4k resolution, the new 70in moth-eye Aquos delivers the holy grail of TV technology by making you feel like you’re looking through the window at a real world outside rather than watching a TV.

The impact of this on your viewing experience has to be seen to be believed; no mere photograph of Sharp’s amazing new screen here can hope do it justice. But having been lucky enough to see the first 70in 4k moth-eye for ourselves, we have no hesitation in declaring it one of our favourite products of the entire 2013 CES.

It’s great to be able to add, then, that the screen isn’t just a prototype. It’s due to launch in America in the first half of 2013 – though we’re still waiting for confirmation from Sharp Europe over whether it will eventually arrive in the UK. Fingers crossed, and all that…