Aside from OLED technology, 4k screens were probably the biggest story of the 2012 Consumer Electronics Show. And for us, one of the stars of the 4k story was the initially unassuming looking 60in 4k screen tucked away in a corner of Sharp’s CES stand.

What made this Sharp 4K screen such a stand out? One word: upscaling.

The thing is, however much our hearts, minds and especially eyes might be crying out for native 4k-resolution content in our living rooms, the simple reality is that it’s not going to happen any time soon. At least in any sort of quantity. So with 4k screens and projectors slated to go on sale this year, it’s obvious that initially, at least, these devices’ upscaling technology is going to be critical. 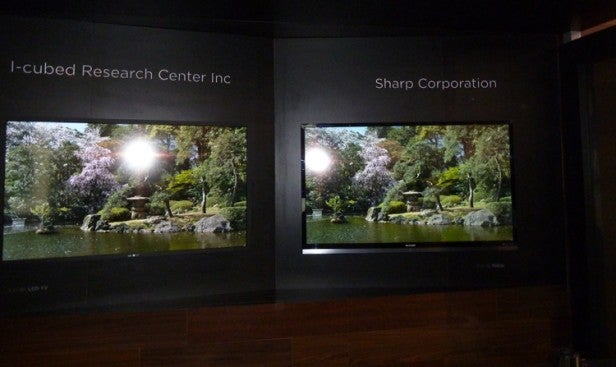 Which is why Sharp’s 4K offering really caught our eye. For it was running both ‘on stand’ and ‘special room’ demonstrations of a (currently) proprietary 4k upscaling process dubbed Integrated Cognitive Creation, which is being developed at Sharp’s i-Cubed Research Center in conjunction with one of the Japanese engineers responsible for the invention of the Trinitron picture tube.

The key trick of this processing compared with typical upscaling systems is that it delivers its results from interpreting light stimuli, particularly shadows, in much the same way the brain uses light information to perceive the real world.

The rather grand claimed ambition behind this is that rather than just recreating the original filmed material in 4K, Sharp wants to create the real scene as it would appear if you were actually there, in the room or outdoor space being filmed, rather than just seeing what the camera captured.

Naturally such heady marketing claims should be treated with a hearty degree of scepticism. But it took all of 10 seconds watching Sharp’s 60in 4K screen in action to realise that its 4K upscaling engine really is a cut above the norm.

To show what it could do, Sharp had got two 60in TVs sitting side by side, one 4K model equipped with the i-Cubed system, the other a standard full HD screen, with a 1080p feed being divided into two 1080i feeds, once for each screen. Not surprisingly the 1080i feed didn’t look very special at all on the full HD screen, with very noticeable softness and a level of texture that didn’t look much higher than standard definition. 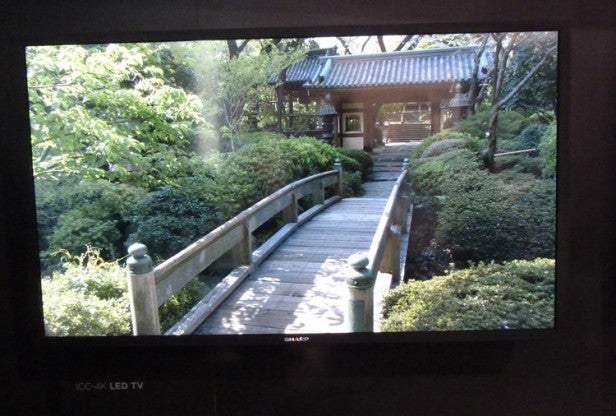 On the 4k screen, on the other hand, the 1080i picture looked absolutely sensational. Forget HD; the level of detail present in the image clearly went beyond normal 1920×1080 levels into something that genuinely looked like a native 4k image.

In fact, it arguably worked too well. For during our time checking the system out, we heard a number of people look at the side by side demo and instantly conclude that it clearly must be rigged, as no upscaling process could be that effective!

The more we studied the image to try and suss out how this spectacular conversion might have happened, the more we realised that it wasn’t just a result of the processing adding extra pixels of picture information accurately. It was also doing some striking things with the image’s contrast compared with the 2K screen, subtly but brilliantly emphasising the difference between shadow and light on a remarkably local level, to deliver an effect that made pictures look both much sharper and much deeper – almost as if they were 3D, despite the picture source being resolutely 2D.

This sort of ‘near 3D’ effect is a classic result of a quality 4k image – yet in this instance, of course, the ‘quality 4k image’ is not a native 4k source, but rather the same mushy looking 1080i source feed showing on the 1920×1080 screen.

If we were being really picky there was a little grain visible over some skin tones during our demo time. Also, the test material shown was very bright and ‘contrasty’; we wouldn’t be surprised if the processing worked less effectively on predominantly dark material, as this would contain less light ‘cues’ for the processing’s light stimuli system to work with.

There wasn’t a lot of motion in the exhibition material either, making us wonder how well the processing engine might ‘keep up’ with the demands of a high-motion scene.

None of this detracts for a second, though, from the simple fact that Sharp’s Integrated Cognitive Creation system is quite comfortably the finest 4k upscaler we’ve seen to date. Which means you can count us very excited indeed about the arrival by around September of this year of Sharp’s debut 4K-resolution TVs.