Sharp’s 120in 8K display won't be turning up at your local electrical retailer any time soon. For now, at least, it’s merely a prototype designed to secure headlines and attract interest – and in that sense, it’s mission accomplished.

The current IFA technology show in Berlin has presented the burgeoning world of 8K televisions with two new extremes. At the small end of the spectrum, Samsung took the wraps off the first commercially available 55in 8K TV. However, the new – and frankly more exciting – record for biggest 8K ever goes to Sharp, with its new 120in monster.

Partly because Samsung had stuck its 55-inch 8K TV at the top of its stand’s massive 8K display, thereby requiring a ladder to peruse properly, and partly because it’s debatable if 8K is really worth having on a screen smaller than 65 inches, we decided our First Look time would be better spent in front of Sharp’s new 8K monster.

Unlike Samsung’s 55in 8K debutante, Sharp’s 120in record-breaker wasn’t exactly hard to find. It dominated the entrance to the company’s IFA stand like an extra wall. Seriously, it’s hard to express just how huge a 120in screen appears compared next to the suddenly puny-looking 85/88in 78K TVs by other brands exhibiting at IFA.

Given that 8K’s impact becomes more apparent with every inch you add to a TV screen, it’s entirely logical for Sharp to use screen size to push its own 8K credentials. Especially in a year where the brand wants to draw attention to its newly announced drive to create a “8K+5G” Ecosystem. This is based on the idea that 5G is the best solution to delivering the huge amounts of data associated with 8K video streaming.

As you’d hope, the impact of putting 7680 x 4320 pixels into a 120in screen is blindingly obvious to anyone who beholds it. People involved in the tech world who are familiar with lower-resolution big screens will instantly appreciate the extra sharpness and detail, as well as the lack of any visible pixel structure.

However, even regular consumers can instantly appreciate how much more life-like and immediate the Sharp 120in screen’s 8K pictures look. It was almost funny to see how the screen stopped IFA visitors in their tracks on glimpsing it, with often heard comments such as “it’s like looking through a window” and “it’s like actually being there”.

Related: What is 8K TV? Is it the future of TV tech? 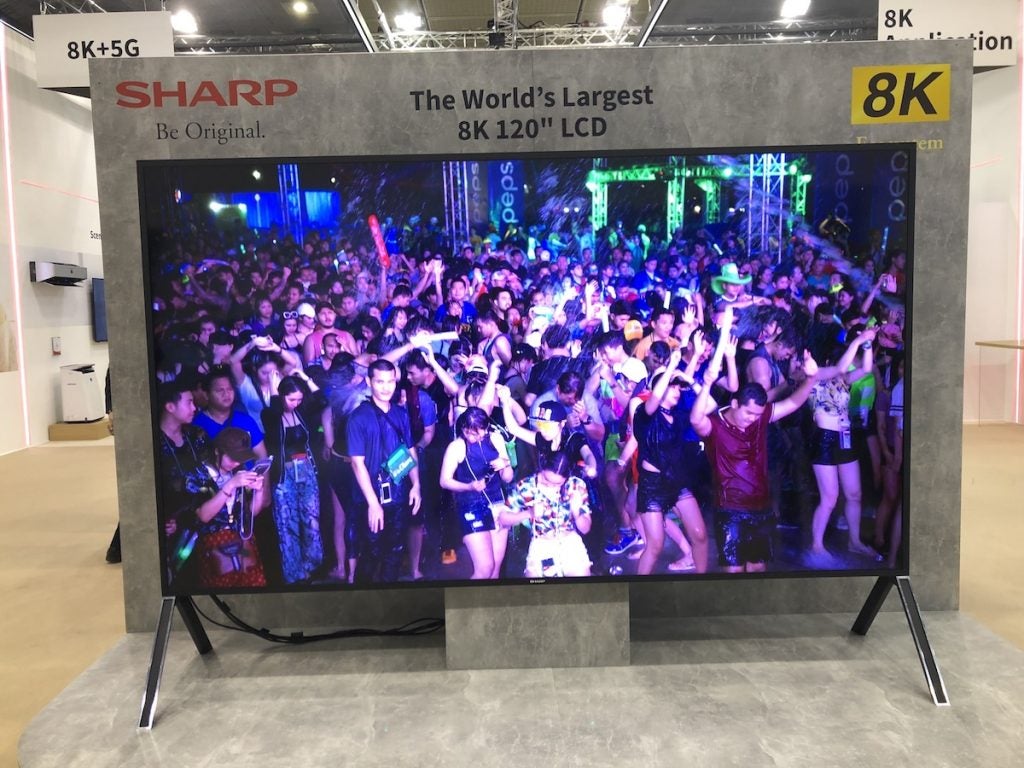 Every good 8K screen I’ve seen thus far has delivered a feeling that you’re no longer looking at a screen. However, none have done it on as grand and jaw-dropping scale as Sharp’s 120in model.

Detail levels are so extreme that you almost stop thinking of them as details. In fact, you stop thinking of the picture as being made up of pixels. The three-dimensional feel that 8K’s detailing delivers in conjunction with high dynamic range is more intense than usual at the epic, view-filling scale this Sharp screen provides.

Despite its colossal size, Sharp delivers pictures that are impressively bright. They showed no problem competing with some exceptionally harsh IFA show-floor lighting – aided and abetted by an impressively low-reflection screen.

In addition, it was great to see that Sharp has gone to the trouble of equipping its 120in showcase with a wide enough colour range to avoid the bleaching effect you get on screens that push brightness beyond the levels with which their colour performance can cope. On the contrary, the most colourful images in Sharp’s demo reel look gorgeously vibrant and rich.

The screen’s contrast also seems pretty good. There’s none of that milky, flat look to the imagery that’s a sure sign of low-contrast screens. What’s more (and very impressively considering it size), its light controls appear accurate and localised enough to deliver some super-punchy HDR highlights in shots of the sun, street lights and night-time city windows. 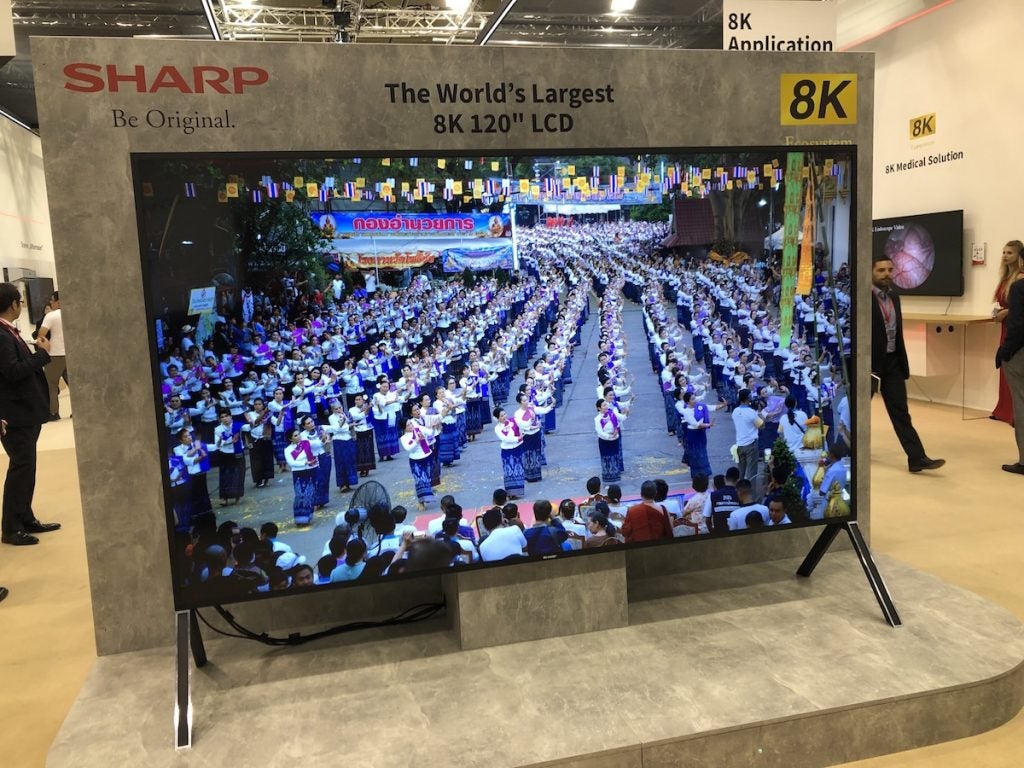 Even better, these bright highlights didn’t appear with obvious backlight “halos” around them.

I did spot a few issues, though. On occasion, skin tones looked a touch jaundiced. Also, while the screen actually supports a quite wide viewing angle by LCD standards, you can see slightly more blooming around bright objects as you move further down the screen’s sides. One or two shots containing mellow, relatively uniform colours in the background appear to pulse slightly.

Also, whenever the red Sharp logo on a white background crops up in the demo real, some parts of the screen clearly look darker than others – almost as if a shadow was being cast on them. This reveals the difficulties of achieving uniform lighting across such screen acreage.

Finally, the level of heat emitted by this massive screen is incredible. You can feel it from as far as 2m away; by the time you venture within a metre to try to spot physical pixel structure, you’re starting to feel like a microwave dinner. I shudder to think how much power it’s burning through.

Sharp’s 120in 8K display won’t be turning up at your local electrical retailer any time soon. For now, at least, it’s merely a prototype designed to secure headlines and attract interest – and in that regard, it’s mission accomplished.

After all, while most of us mere mortals obviously won’t ever be able to contemplate fitting a 120in display into our homes, once you’ve seen the incontrovertible evidence of what 8K can do on Sharp’s IFA showstopper, any ideas you might have that 8K can’t make a difference to picture quality will surely have been well and truly put to bed.